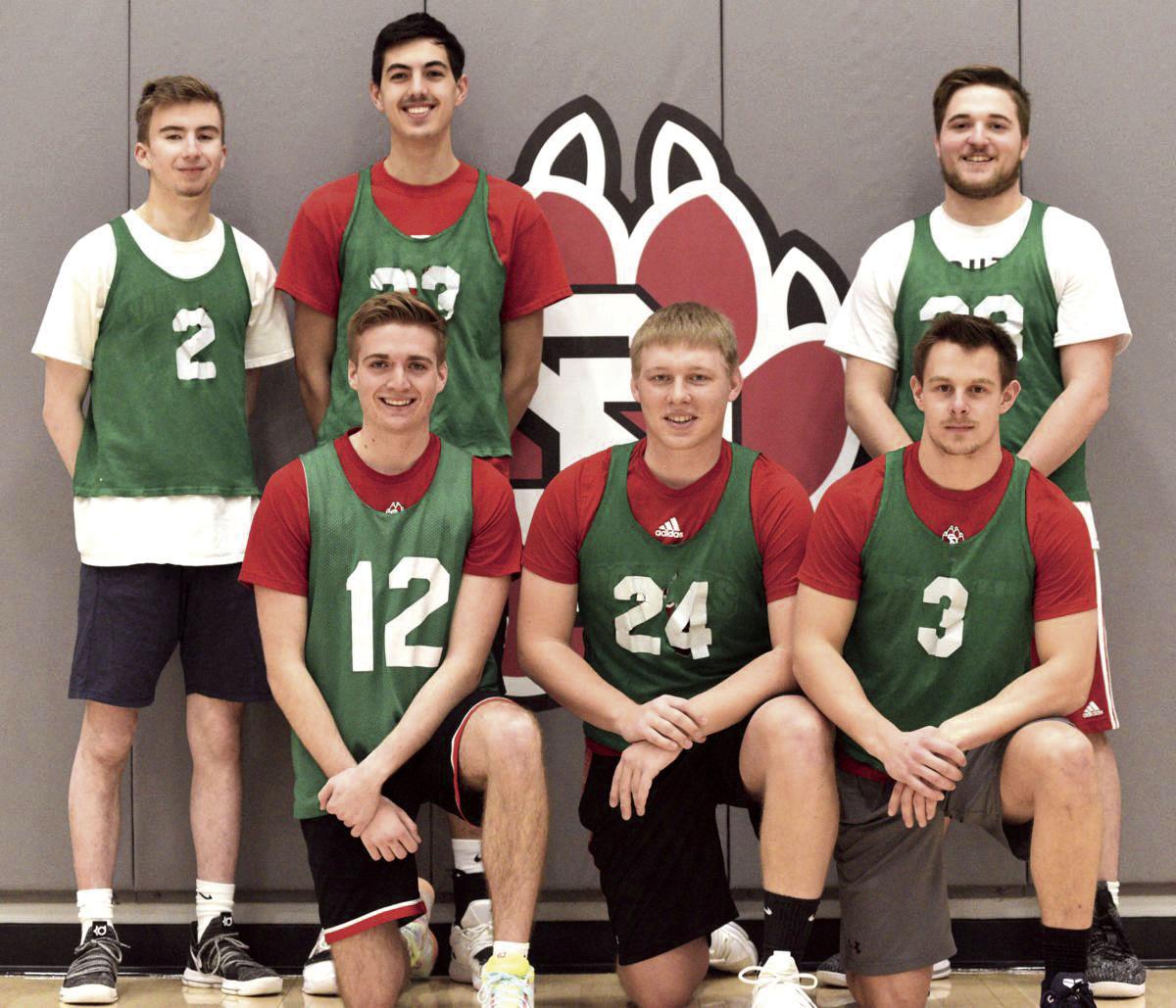 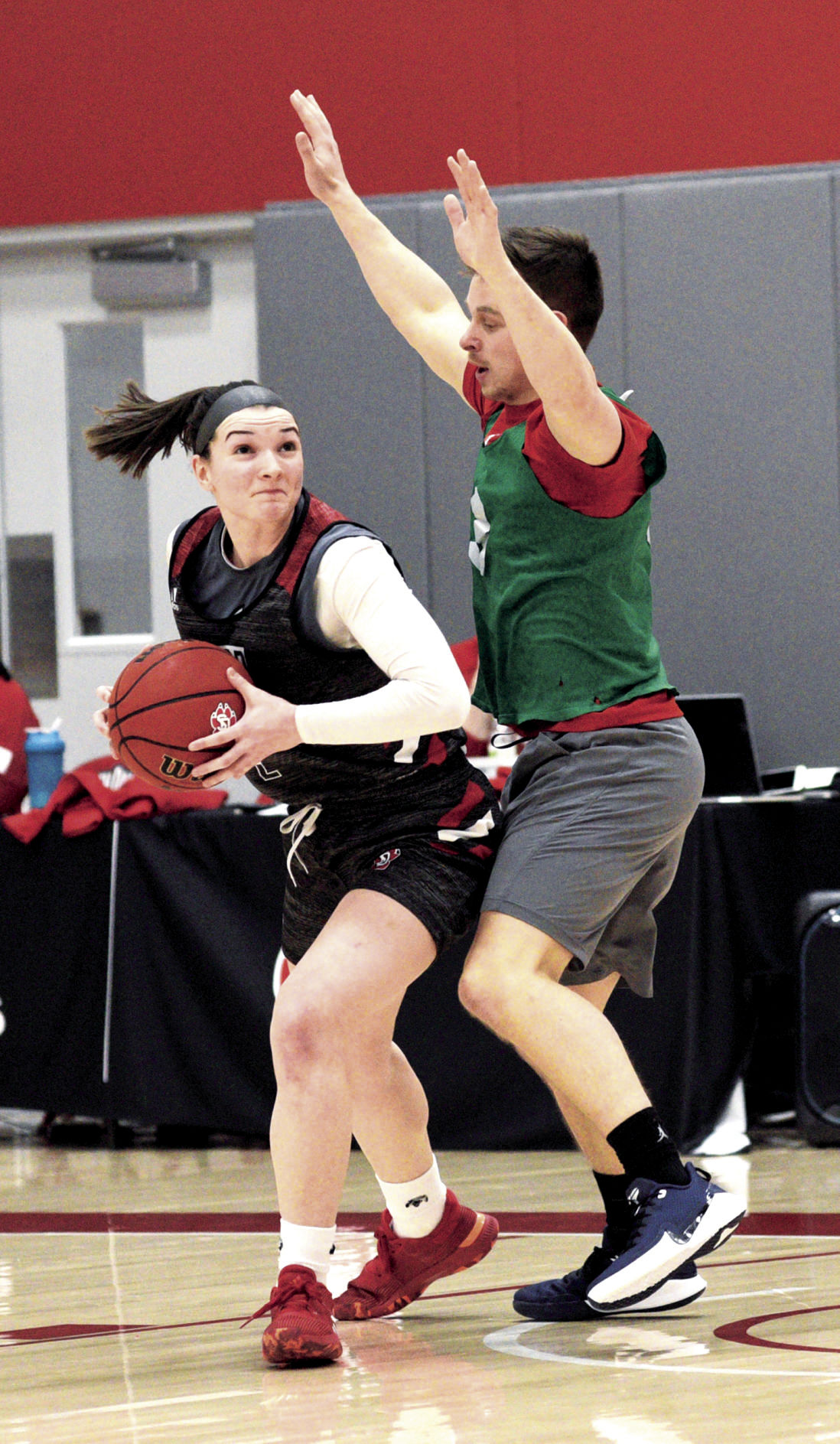 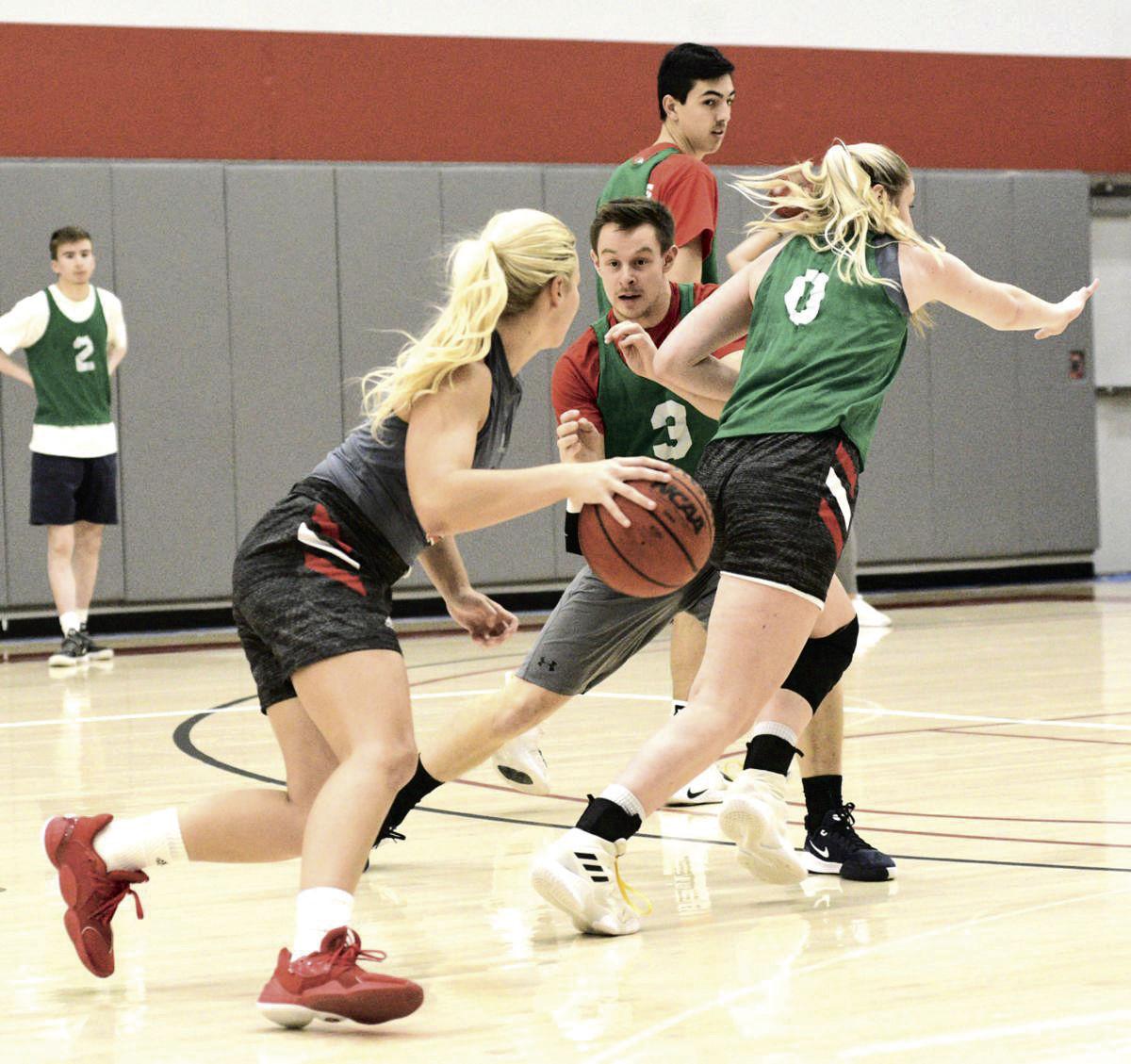 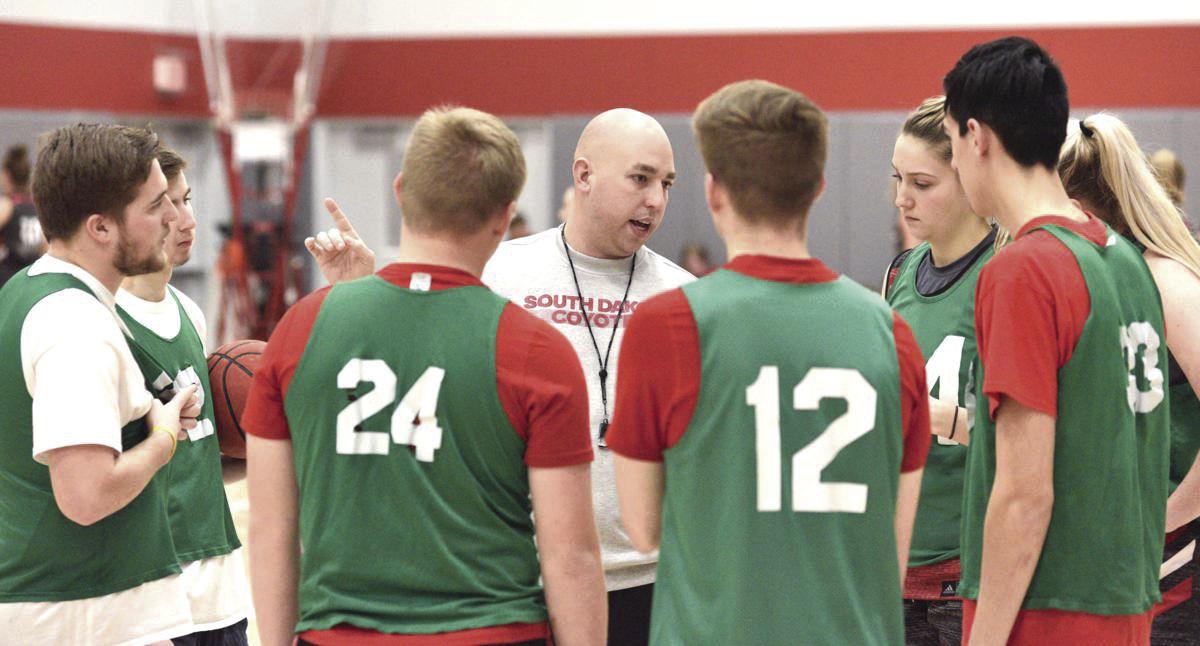 VERMILLION — As Rylan Pratt takes a few warmup shots, Brady Albrecht and Trent Kingsbury sit down to tie their shoes, and for three other guys into the gym, this feels like noon ball.

It has the look of a pick-up game between friends and fellow students.

That’s not what they’re here on a Friday afternoon for, though.

No, these six male University of South Dakota students are here at a practice gym inside the Sanford Coyote Sports Center to practice against a nationally-ranked Division I women’s basketball team.

“It’s been fun,” Pratt says, as he walks across the court.

They’ve all found their small role on a team that is 21-2 this season, 10-0 in the Summit League, nationally-ranked and in search of a second consecutive trip to the NCAA Tournament.

And if you were to ask each practice player, they’d tell you that they’ve long since adapted to the concept of practicing against females.

“You come to practice every day realizing you’re going to get beat sometimes, so you have to be OK with it,” Albrecht says, with a smile.

These guys don’t mind at all.

They instead relish the idea of preparing the Coyotes for their upcoming opponent — that’s the main role the practice guys have; they essentially serve as a scout team.

“They work you pretty hard, and it’s fun to compete again like you did in high school,” Kingsbury says before practice.

“It makes you feel good that you’re helping out and part of their success.”

That’s how the Coyotes see it, too.

“They do a tremendous job for us,” head coach Dawn Plitzuweit says Friday, Jan. 31 from her office, where she’s preparing for a film session with her team.

Those practice guys are considered part of the team to the point where they were invited to USD’s viewing party for the NCAA selection show a year ago — and were later acknowledged to the fans at the public party.

“They’re a big part of our team and our success,” Plitzuweit says.

A lengthy process is involved, however, for any male student to become a practice player.

They first have to be eligible (a full-time student and have to meet a certain grade point average), and then they need to take a physical, and their class schedules have to align with when the team practices. Practice players also don’t receive any compensation and they can’t travel with the team.

Really, the only thing they can receive is team apparel — most of the guys on the floor Friday are wearing Coyote t-shirts.

“They have to do it out of the kindness and goodness of their heart,” Plitzuweit says.

Not all 12 guys attend every practice, but there’s a strategy involved, too, in the number of smaller guards or taller post-type players that USD would like to see for each practice.

“It’s all about getting the right look, depending on who we play next,” says Alex Antonen, the director of basketball operations, as he walks to the practice gym.

With these practice players, though, it’s far more than just showing up to the gym.

No, they arrive early to watch film with associate head coach Jason Jeschke and then he runs through different sets for the upcoming practice — it’s a lot to take in in a short amount of time.

“They’re so valuable for us,” Jeschke says.

Those practice players allows USD’s players to focus on their side of things, he adds.

There are other things the practice guys do once the women’s players arrive and practice begins, but ultimately, their goal is the same: Help the Coyotes.

“It’s good to have guys in there who push us to the next level, and that’s what we need,” senior Madison McKeever says.

The kind of rebounding, pressure and athleticism that the practice guys provide are all things that will help the Coyotes, according to McKeever.

It’s not as though the guys come in and only give 50 percent effort, either — the USD coaches don’t want them to snag rebounds off the glass or try to dunk the ball, though.

“A lot of times they try to put us in tricky situations, so I’m usually going full bore,” Pratt says.

“They’re really good; don’t underestimate those girls. They kick our butts sometimes,” he adds, with a smile.

Do the practice guys take credit for victories?

“Oh yeah, for sure,” McKeever says with a smile.

But there is a sense of pride involved when the Coyotes win, the practice guys say.

“It makes us feel good that we’re a small part of that,” Kingsbury says.

“Even though people may not know about us, we like to come in here and work hard for them.”