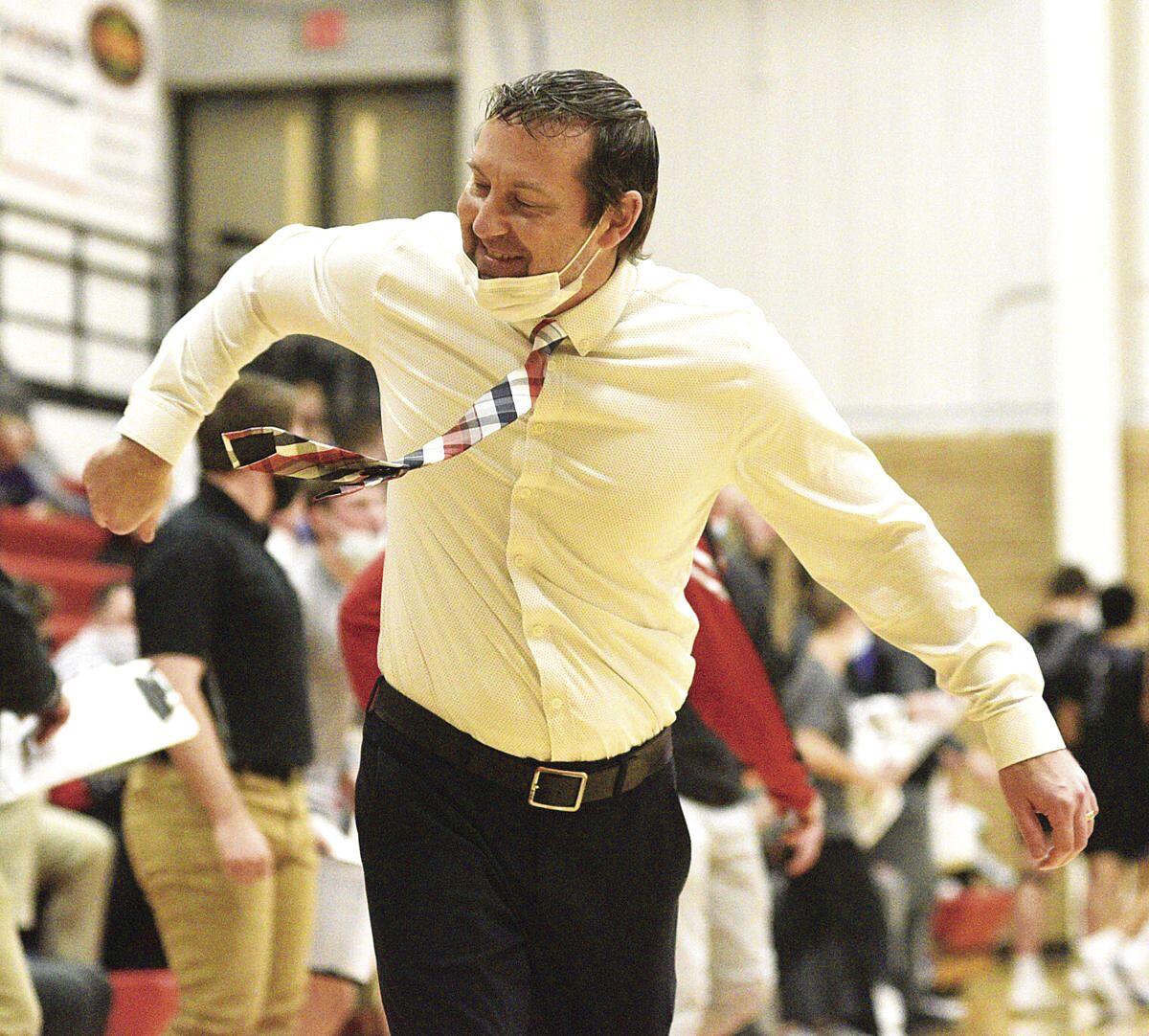 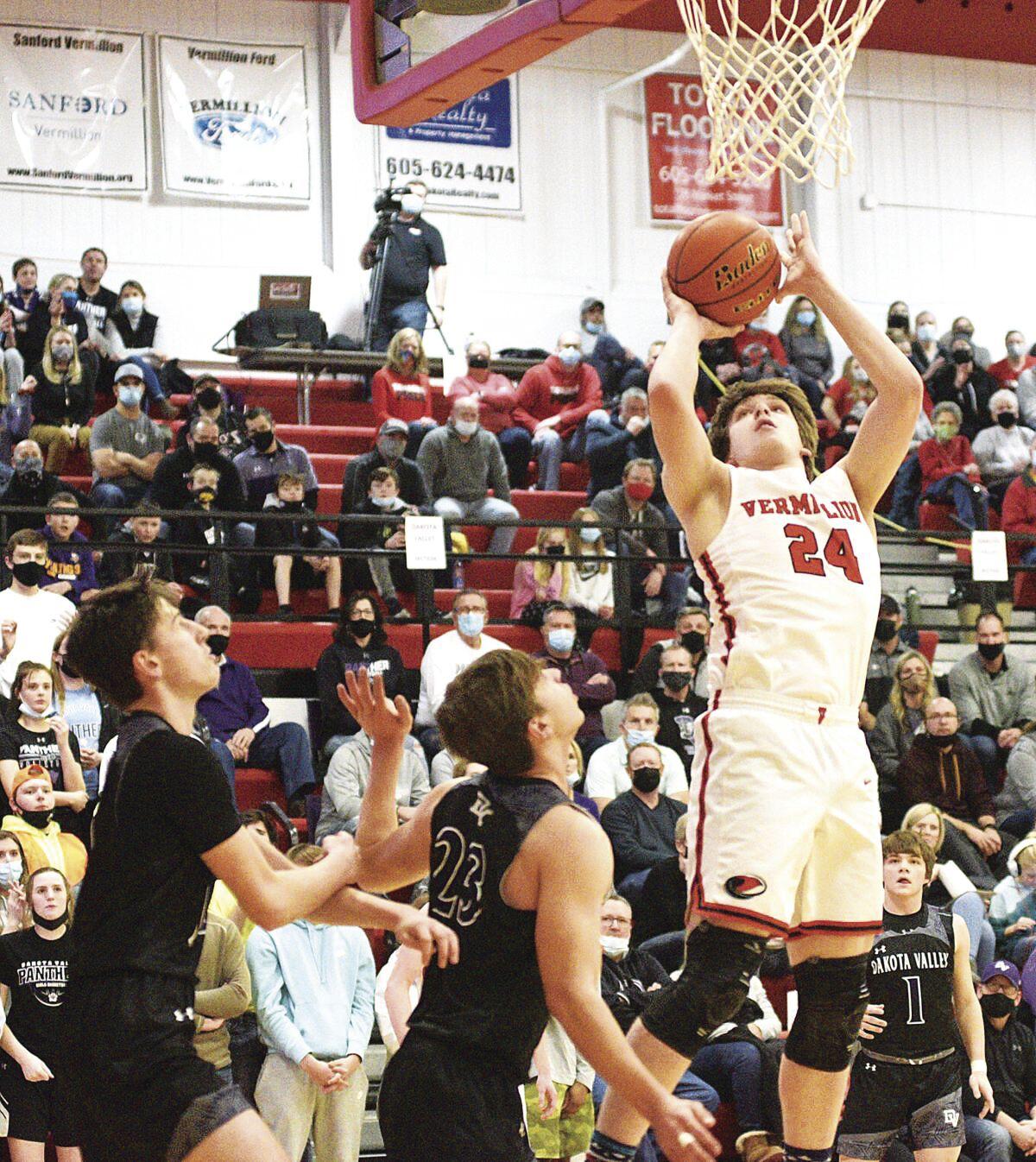 Vermillion’s Dillon Gestring, 24, goes up for a shot around two Dakota Valley defenders during the Tuesday, Feb. 9, boys’ basketball game against Dakota Valley in Vermillion.

Vermillion’s Dillon Gestring, 24, goes up for a shot around two Dakota Valley defenders during the Tuesday, Feb. 9, boys’ basketball game against Dakota Valley in Vermillion.

When Jay Drake says it to his players, they know exactly what it means. They’ve gotten plenty used to hearing it.

“He says it before every game and in every practice,” Vermillion High School senior Dillon Gestring joked Wednesday, Feb. 10.

“It’s all about being tougher physically and mentally,” he added. “It’s those little things like diving on the floor; the stats that don’t show up.”

They’re the hustle plays that nobody would see in a box score after a game, added Drake, the Vermillion head boys’ basketball coach.

His players, he said, have embraced those ‘invisibles.’

“They’re all great kids, and that’s been the main thing with our group this year, they’ve really bought into playing together,” Drake said.

“They don’t care one who gets what points or whatever, as long as we get it done.”

To the rest of the state, however, the Tanagers aren’t invisible. No, everyone can see them.

There’s nothing hidden from view when you sport, as of two weeks ago, an unblemished 14-0 record, a No. 1 ranking in your class (A) and you’re looking like the team to beat for a state championship.

Vermillion cemented its top ranking with a 79-68 victory over third-ranked Dakota Valley on Tuesday night, Feb. 9, in an electric atmosphere at Vermillion High School.

It was another game in which the Tanagers showed that everyone can do a little bit of everything.

“If you look at our stats, you could have one guy going off for 32 like Jakob did or another person doing it another night,” Gestring said. “It’s fun. It doesn’t matter who scores.”

Vermillion’s main rotation would be even deeper if not for an injury.

Junior Charlie Ward suffered a knee injury late in the football season for the Tanagers and would have assumed the starting point guard duties for the basketball team, according to Drake.

“When he went down, it was a concern from a personnel standpoint and a depth standpoint, but our guys have hung in there,” Drake said.

They were already motivated enough — long before Ward’s injury — for a strong 2020-21 season after last season’s run ended with a loss to Dell Rapids in the SoDak 16.

“It obviously stings to end on a note like that; to fall short in the end,” Gestring said. “It’s still a fresh wound for all of us.”

The Tanagers used that loss as fuel for this season, which is off to a historic pace.

Vermillion, which was 17-6 a season ago, hasn’t reached the state tournament since 1989 when it won the second of two straight championships.

“We feel like the last seven years or so, we’ve had some really good teams, but haven’t reached our ultimate goal,” said Drake, who is in his seventh season as head coach.

The Tanagers also feel like their competition within the Dakota XII Conference prepares them for postseason success, he added.

Drake said he was confident that with what his team returned this season, Vermillion could once again be a contender, even though the stalwarts of the conference — Dakota Valley, Dell Rapids, Sioux Falls Christian and Tea Area — also brought back plenty of talent this season.

“With the group we had back and with what those other four had back, we felt we could be five of the better teams in Class A,” Drake said.

After Tuesday’s (Feb. 9) win over Dakota Valley, Vermillion is now 8-0 this season in the Dak XII with two games remaining (Madison and Canton).

The Tanagers have leap-frogged Dakota Valley for first place in Region 4A, and the final two teams left standing in the 4A Tournament advance to the SoDak 16.

For now, though, Vermillion is set on continued improvement, according to Drake.

“It sounds so cliché, but you want to improve as the year goes on, and you want to be playing your best basketball at this point in the season,” he said.

As far as the No. 1 ranking goes, the Tanagers aren’t really spending much time thinking about it, according to Gestring.

“It’s cool and all, but a number one ranking doesn’t matter in March if you don’t win the state tournament,” he said.

And that’s the goal: To bring home a state championship trophy.

“It’s more of an unspoken goal,” Gestring said. “We all know that’s where we want to be, so we don’t even need to say it out loud.”