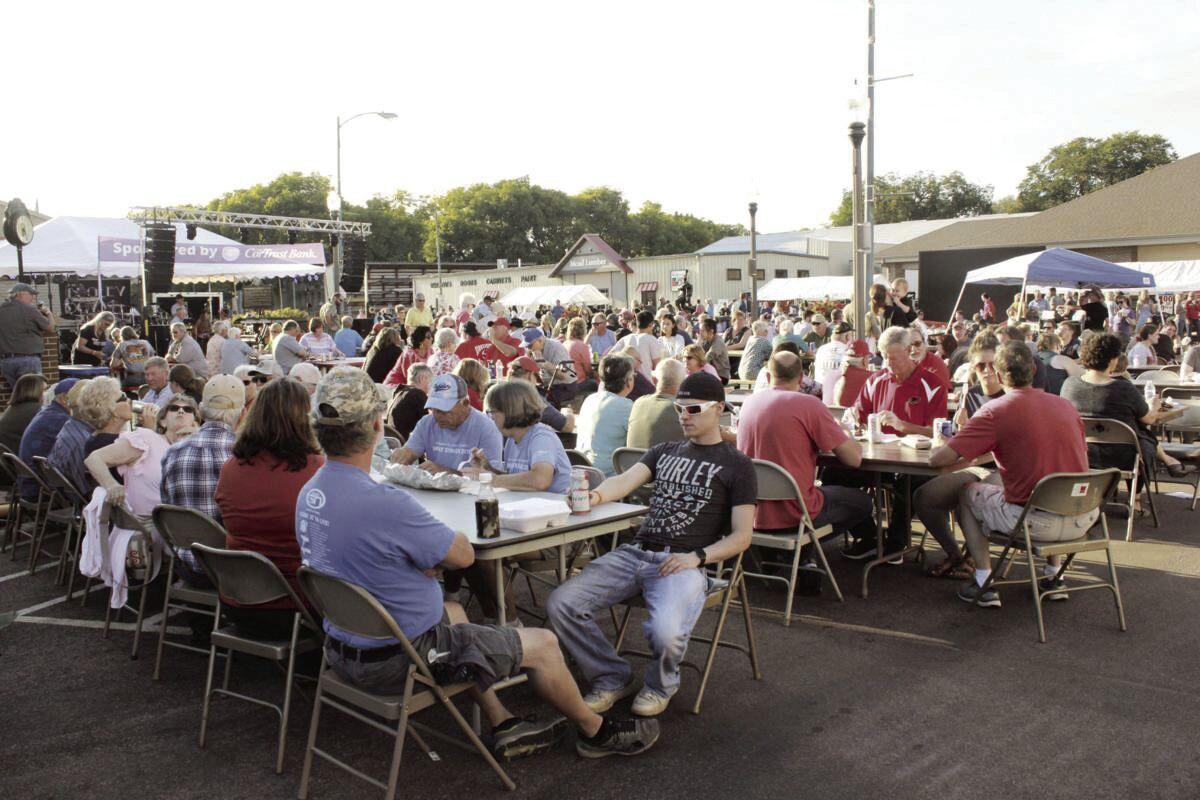 A crowd of people fills the tables set up around Ratingen Platz during the first night of the 2019 Ribs, Rods & Rock 'N Roll held in Vermillion. Planners of this year's event are expecting similar, or perhaps greater numbers this week. 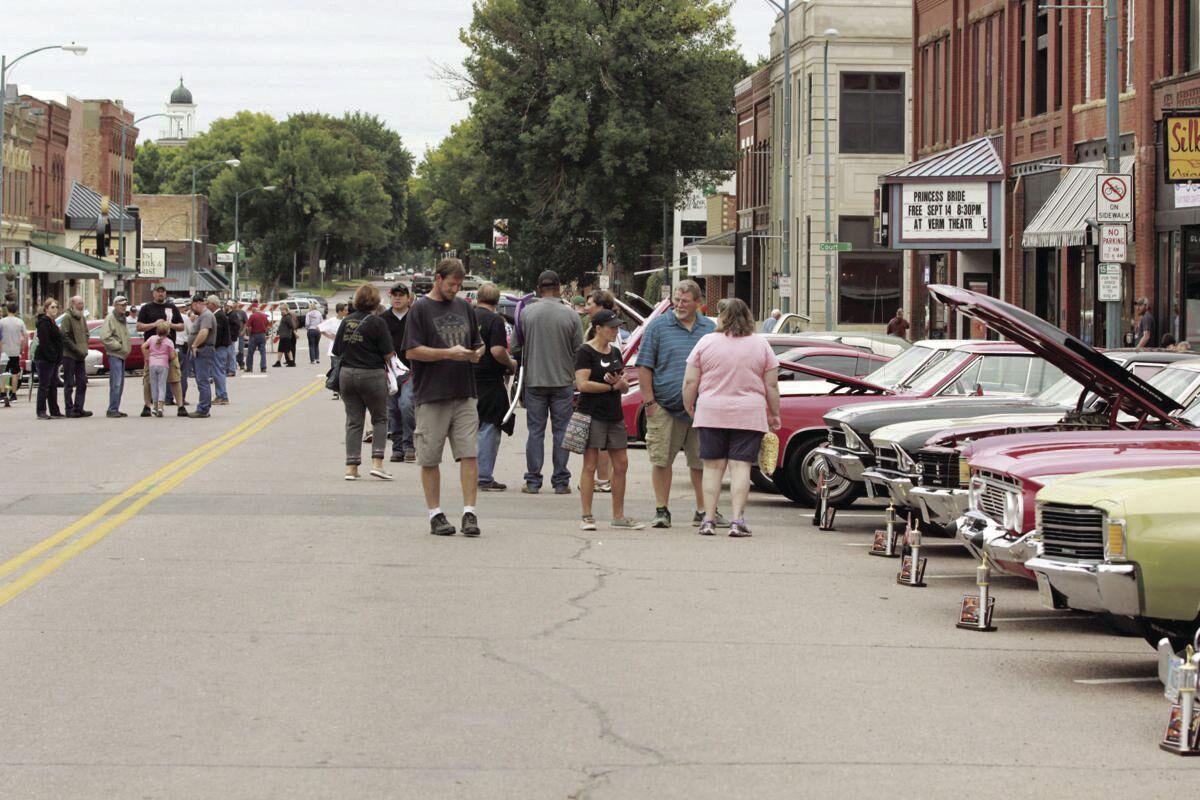 Rainy weather in 2019 reduced the number of visitors to the Classic Car & Cycle Show and Shine held as part of that year's Ribs, Rods & Rock 'N Roll in Vermillion. A favorable weather forecast and a heightened desire of people to get out of the house as the pandemic lessens has planners expecting a greater turnout this weekend.

A crowd of people fills the tables set up around Ratingen Platz during the first night of the 2019 Ribs, Rods & Rock 'N Roll held in Vermillion. Planners of this year's event are expecting similar, or perhaps greater numbers this week.

Rainy weather in 2019 reduced the number of visitors to the Classic Car & Cycle Show and Shine held as part of that year's Ribs, Rods & Rock 'N Roll in Vermillion. A favorable weather forecast and a heightened desire of people to get out of the house as the pandemic lessens has planners expecting a greater turnout this weekend.

After a year in which the COVID-19 pandemic made public participation in Vermillion’s annual Ribs, Rods and Rock ‘n Roll impossible, organizers are ready for this year’s event to begin Friday, Sept. 10 as it always has – with a great turnout of competitors and people from the community and surrounding area ready to enjoy a great line-up of food, music and other entertainment.

The 17th annual Ribs, Rods & Rock ‘N Roll will kick off in Vermillion at 5 p.m. Friday with live music by the Clay Creek Deaf Cowboy Band.

The event has over the years attracted a strong lineup of a KCBS (Kansas City Barbecue Society)- sanctioned competitors who travel to South Dakota from around the United States to compete.

It also attracts thousands of people to dine on barbecue, listen to live music and enjoy a host of activities, ranging from a Corn Hole Tournament to the annual Classic Car & Cycle Show & Shine.

“You know we are at about normal numbers with the competitors … maybe a little lower than usual,” said Jenny French, president of the Ribs, Rods and Rock ‘n Roll Committee. “We could still get a few more this week. But, from what we’ve heard from the local community, it’s going to be a great weekend and we know Riverboat Days (in Yankton) had one of the best years ever if not the best year ever with people attending.

“And people are ready to get out more,” she said.

This year’s event will also be held in a partially improved downtown as workers make progress on the Vermillion Downtown Streetscape project.

French said the construction should have little impact on this weekend’s event.

“We are anticipating possibly not having the north side of one of the blocks downtown, which would just affect the car show a little bit,” she said. “We’ll just have to spread them out (the cars) a little bit more and get the cars down the middle, just squeeze them in a little better.”

The focus of streetscape work recently has been in the area of Ratingen Platz, which is located on the corner of Main and Market streets.

The Platz serves as focal point for the annual event. Musical acts are staged there and it is usually surrounded by tables where visitors dine on the ribs served by several vendors located nearby as they listen to live music.

Construction work around the Platz is expected to be complete by the time Ribs, Rods and Rock ‘n Roll begins Friday.

“Rod Oberle of our committee has been meeting with the city and the contractors,” French said. “He’s been going to the meetings every week and I don’t know if the planters will be filled with plants and things, but there will be dirt and it will be safe and we can use the whole area.”

The Ribs, Rods and Rock ‘n Roll web page notes that barbecuing ribs is an important part of Vermillion’s history. Decades ago, cooking and serving barbecue was begun by the community’s forefathers as a way to celebrate the end of harvest.

“Every year after the completion of harvest the community would celebrate by barbequing ribs over hand dug pits below the bluff along the banks of the Vermillion River,” the website states. “The feast was cooked using corn cobs. The entire Vermillion community was welcome.”

The modern-day event has a KCBS sponsored BBQ cookoff that, as of Tuesday, has 25 teams signed up to compete in various categories of barbecue preparation.

The planners of Ribs, Rods and Rock ‘n Roll have also made sure to schedule events that will appeal to people of all ages.

Friday’s schedule includes the opening of the Rib Fest Food Court and Beer Garden from 5 p.m. to 12 a.m. Following registration that is scheduled from 5 to 6 p.m., a Cornhole Tournament will begin downtown at 7 p.m.

A family fun area also will open at 5 p.m. Friday and new event – axe throwing – is also scheduled to begin at 5 p.m.

A “People’s Choice Wing War” will be held Friday from 5:30 to 7 p.m. People who wish to judge barbecued wings are asked to sign up to receive tokens they will use to vote for the entries they like the best. The team with the most tokens at the end of the competition will be declared the winner.

Each team will also receive $1 per token that is placed in their ballot box. The more tokens earned by a team, the better its chance they have at winning and at earning more prize money.

A “Public Choice BBQ War” will be held Saturday afternoon, from 2 to 3:30 p.m. It will work much like Friday’s Wing War, with the public choosing the winning competitors.

Friday evening will also include a “Walmart Kids Q” that gives youth a chance to try out their barbecue competition skills. Grills will be provided for competing youth to begin cooking their entries at 6:30 p.m. Judging will begin at approximately 7:30 p.m. and awards will be presented at about 8:15 p.m.

Anyone is welcome to participate in the American Legion Post 1 Corn Hole Tournament, which is scheduled to begin at 6 p.m. at the intersection of Main and Prospects streets in front of Café Brule. There will be cash payouts to teams that place first, second and third.

A family fun area (featuring inflatables and other kid activities) and sidewalk vendors will be open from 5 until 8 p.m. Friday. Don’t miss the “Wing War” from 5:30 until 7:00 p.m. and be sure to vote for your favorite wing to help determine who will win the People’s Choice award.

Friday’s activities will end with a street dance that begins at 8 p.m. with live music provided by Wild Card.

On Saturday, Sept. 11, at 9:30 a.m., a 5k Color Run will begin at the corner of Market and Kidder streets. The event, sponsored by the 730th Area Support Medical Company (ASMC) of the South Dakota Army National Guard in Vermillion, will be held to honor those who were lost in the 9/11 terrorist attacks.

Before the race begins, opening remarks will be given at the CorTrust stage, moments of silence will be observed, and the USD Band will perform “The National Anthem.”

Registration for the Classic Car & Cycle Show & Shine will be held from 9 a.m. until 12 noon Saturday. The show begins at noon and will wrap up at 4 p.m.

The family fun area, the axe throwing event, and the Rib Fest Food Court and Beer Garden will all begin again at 10 a.m. The fun area and axe throwing activity are scheduled to end at 8 p.m.; the food court and beer garden will close at 10 p.m.

The South Dakota BBQ Championship judging will be held from noon until 2 p.m. The awards presentation for this year’s competition will be held at 4 p.m. at Ratingen Platz.

Other activities that afternoon include the Pork People’s Choice competition from 2 to 3:30 p.m. and a Poker Run that begins at 4 p.m. that will have two cash winners.

The 2021 Ribs, Rods & Rock ‘N Roll will conclude with a street dance that begins at 5 p.m. featuring JETT. The dance is scheduled to end at 10 p.m.

Children’s activities and vendors will be open at 11 a.m. until 8 p.m. with the Classic Car & Cycle Show and Shine taking place from noon until 4 p.m.

Members of the 2021 Ribs, Rods & Rock ‘N Roll Committee are all set for a “normal” event to return to downtown Vermillion, and they’re sensing that local citizens are anxious for its return.

“We’re getting a lot of positive energy from the community,” French said. “They’re really looking forward to it and we’re expecting a huge crowd. The weather for the weekend looks like it will beautiful, too.”