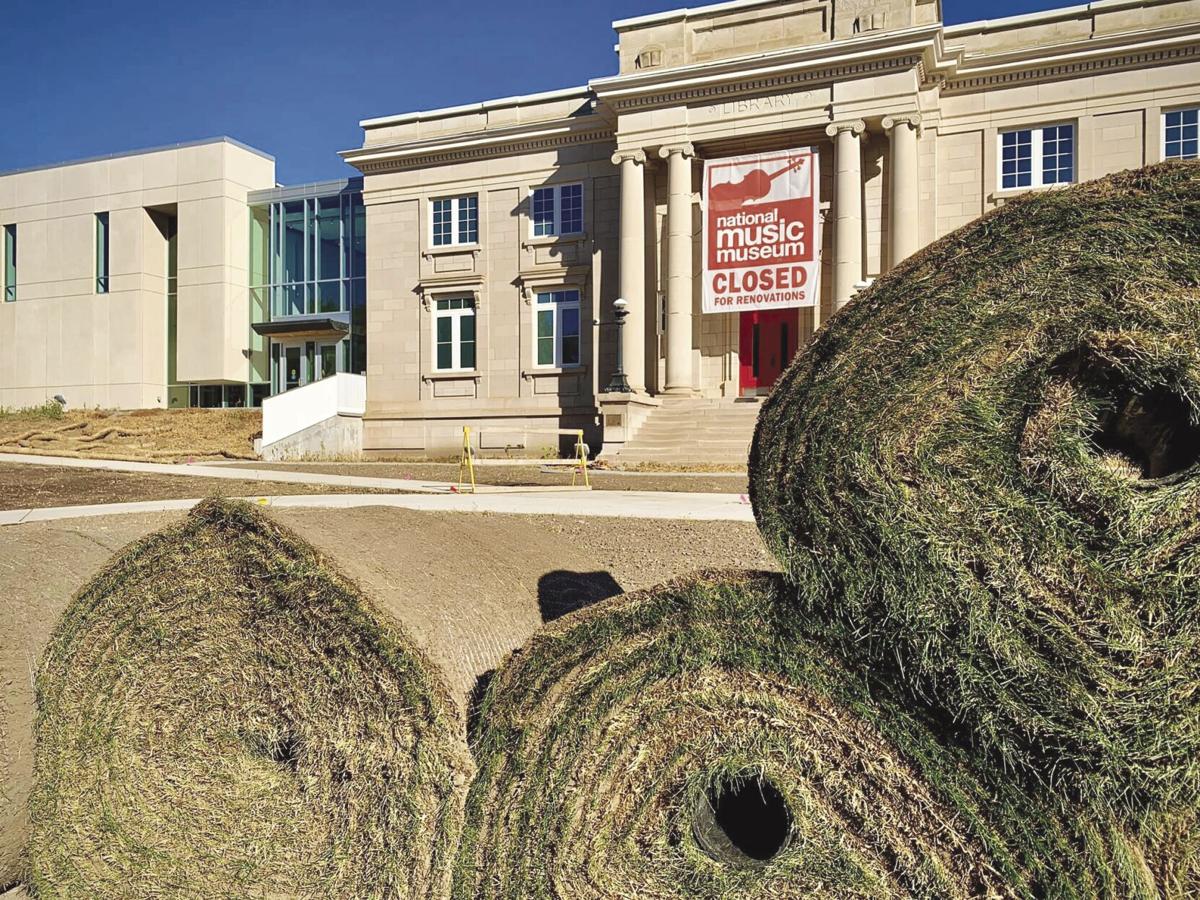 After being torn up for the better part of a year, the exterior esthetics of the National Music Museum got a big boost when sod was installed around the exterior of the building earlier this month. The new addition is scheduled to open in the spring of 2021, but interior work will go on for at least another year as 13 galleries are constructed in the 13,000 square feet of the museum's Carnegie building. 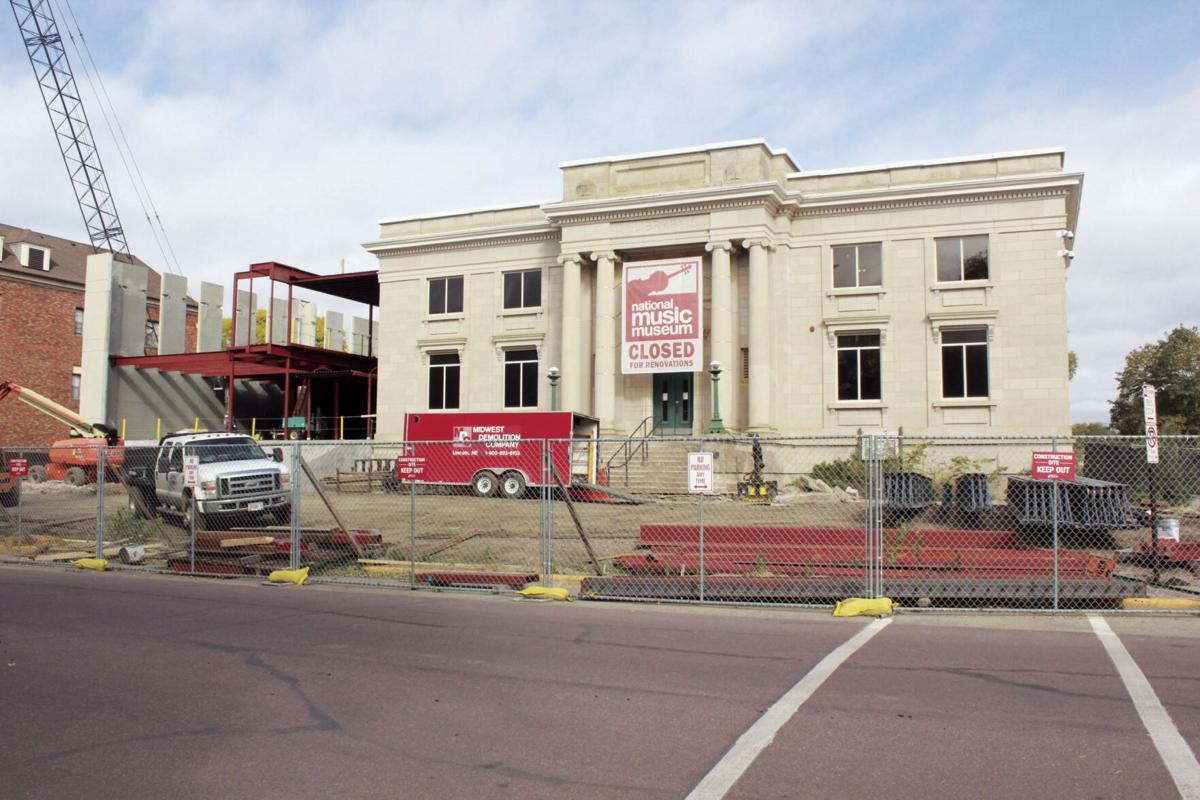 Iron beams and concrete walls were in place approximately a year ago as construction workers made progress on the new addition to the National Music Museum on the campus of the University of South Dakota. Construction of the new addition is now virtually complete and it is scheduled to open in the spring of next year.

After being torn up for the better part of a year, the exterior esthetics of the National Music Museum got a big boost when sod was installed around the exterior of the building earlier this month. The new addition is scheduled to open in the spring of 2021, but interior work will go on for at least another year as 13 galleries are constructed in the 13,000 square feet of the museum's Carnegie building.

Iron beams and concrete walls were in place approximately a year ago as construction workers made progress on the new addition to the National Music Museum on the campus of the University of South Dakota. Construction of the new addition is now virtually complete and it is scheduled to open in the spring of next year.

The Vermillion City Council got a sneak peek at what the interior of the National Music Museum (NMM) on the University of South Dakota campus will eventually look like once the facility’s new addition and the renovation of the former USD Carnegie Library, which has served as home to the museum for decades, is complete.

“I am thrilled to be here,” said Matt Collinsworth, the director of the museum as the city council met via Zoom at noon on Oct. 5. “It’s a busy time to be here … COVID-19 has not deterred our progress in any demonstrable way yet in terms of our construction projects.”

Much work has been done, he said, and it will be approximately a year and half before the remodeling of the museum and the creation of new exhibits is complete.

In March 2018, the NMM announced it would be adding 16,000 square feet to its 1910 building (formerly the Carnegie Library) in a $9.5 million expansion project. The addition includes a new concert hall, temporary-exhibits gallery, Galleria atrium, kid-friendly areas, research and conservation lab and about 4,600 square feet of new exhibit space.

Before the construction of the new addition at the museum could begin, however, the museum had to complete another building project. In the fall of 2018, work began on the museum’s new Center for Preservation and Research located on Carr Street.

“By the spring of that year it was under roof and they were pouring concrete flooring out there and then, by May of 2019, we had started working on the Carnegie Building. By June, we’re rushing to get everything out of Carnegie and by July the footers and the basement walls of the new addition (to the Carnegie building) were poured and things were moving very quickly. Also by July, the Center for Preservation and Research on Carr Street was essentially complete and we were prepared to move into that facility,” he said.

In late July and through August of last year, the 6,000 instruments housed in the Carnegie building were moved to the Center for Preservation and Research.

“It’s very full. We’re thrilled to have that facility. The expansion of Carnegie wouldn’t really have been possible without it and it has worked incredibly well for us since we moved in,” Collinsworth said. “We have about 8,000 objects stored there now and have begun the process of moving things back into Carnegie today. Our team has started to move boxes of books and papers back into the expanded museum facility.”

By October of 2019, the walls were going up and the floors were being poured of the new addition and that work continued throughout the winter.

“By the spring of this year, things were rounding into shape, but there was still a lot of work that needed to be done … but by August of this year, the project was essentially finished,” Collinsworth said. “We still have a little bit of work that’s going on … some final touches that are being finished, but by and large, the new wing is done.

Collinsworth showed city council members slides of images of what has been completed and what’s still to come at the museum. Featured in the interior of the new addition at the NMM is a new performance hall.

“It sounds great; it looks beautiful,” he said. “It will seat around 104 people.” Seating still has to be added to the hall, but ‘it’s generally done,” Collinsworth added. “It will be a fantastic place not just for musical performances but also for meetings and presentations.”

He also shared a photo of the museum’s new foyer, which is big, open and spacious, with a lot of natural light. Next to the performance hall is a changing exhibition gallery with glass partitions that may be opened to make it one large room for events, exhibition openings and similar activities.

“That is something we did not have in the Carnegie building before this project,” he said. ‘We were not able to do changing and traveling exhibitions.”

Changes have been made in the structure of the Carnegie building.

“Our galleries on the second floor did not connect with one another. They were sort of individual cells. Doorways have been installed connecting all three of the large galleries on the north side of the building,” Collinsworth said.

He also shared a photo of new classroom space that has been created in the museum with the help of city funding.

“It’s a beautiful, functional space that adjoins with our galleries on the second floor and it will be a great place not just for taking school groups or conducting USD classes, but also it will be available for community meetings and all of those sorts of functions,” he said.

Further renovations will create 13 galleries in the Carnegie building.

“The structure of all of the room spaces is the same except that the ones upstairs are now connected with new doorways,” Collinsworth said. “All that’s really happened at Carnegie is a pretty sensitive renovation. We did new flooring, but we tried to maintain any significant architectural details in the space.”

The new addition to the NMM should open sometime in the spring of 2021.

“However, it’s going to take us a bit longer to get the Carnegie side of the building opened up -- the historic wing,” he said, “because that’s where our permanent exhibitions will be.”

The galleries in Carnegie, once completed will look significantly different than they did before the renovation took place.

He gave the Vermillion City Council a “walk through” of what’s envisioned in those galleries through a slide presentation.

The exhibitions are being designed and created with the expertise of Luci Creative, of Chicago, Illinois.

“They’ve done a fantastic job working with us,” Collinsworth said. “This is not an easy design project.

“The mission of the National Music Museum, which has guided us through the exhibition design process, is to explore, enjoy and preserve the world of musical instruments,” he said, “and so that mission undergirds all of our decisions moving forward. Our goals for this exhibition process is that we want visitors to have a unique, enjoyable and educational experience regardless of whether it’s a group of third graders or a couple of adults stopping by on their way to the Black Hills.

“We want everyone to be able to have that sort of experience,” Collinsworth said. “We want to maintain our position as a preeminent institution and resource for research. We, of course, want to care for and preserve the instruments in our care for future generations. We want to be welcoming and accessible for all of our constituent communities -- folks from the city, students from USD, regional school systems -- we want to be a place that welcomes everyone.”

The NMM also wants to provide unique performances and programming, particularly in the performance hall and the changing exhibition gallery, he said, and it wants to provide good educational content for students in grades K through 12 and in universities in the Vermillion region and from around the state.

“The big idea we landed on for the thesis statement for these exhibitions is musical instruments tell us stories about creativity, culture and connection,” Collinsworth said. “Thematically, that’s the big idea. That’s the story we’re trying to tell as we develop these permanent exhibitions.

“The key messages are people make music and musical instruments to express what they find meaningful,” he said. “Musical instruments develop along, with and in response to their socio-cultural context and, finally, music is part of our lives and it helps us build community. Those are the three key messages that we’re dealing with.”

The goal of the museum is to create new exhibits that are warm and bright with a lot of natural elements and some moments of drama.

“We want them to highlight, not distract from the objects in our collections,” Collinsworth said. “And we want the approach to each gallery to be inspired by the objects contained within.”

He shared sketches of how the new galleries may appear with city council members.

“We want a flexible approach; we want things to be able to shift with the objects being displayed and we want the pairings to be right,” Collinsworth said, describing how the font of the type used to describe various instruments will reflect the era in which they were produced.”

Read more about the exhibits that are planned for the NMM’s Carnegie building in next week’s Plain Talk.