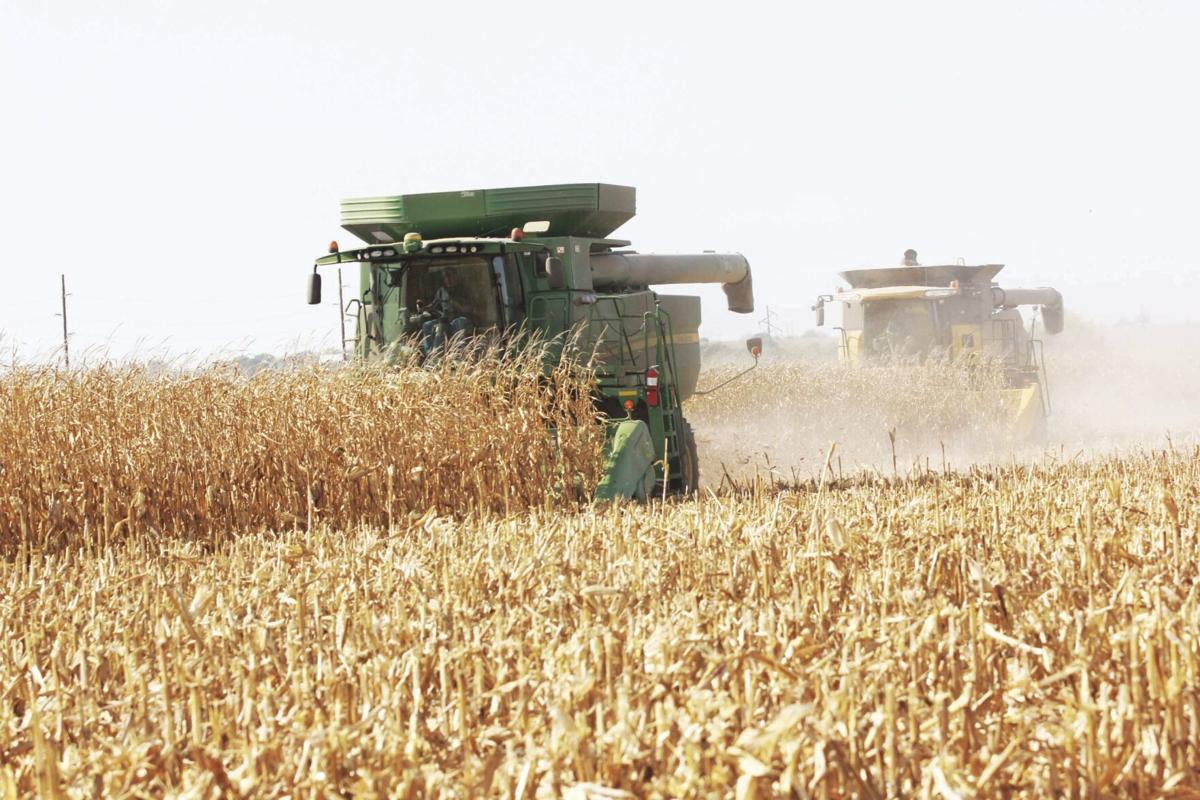 A John Deere combine and a New Holland combine operate in unison Tuesday afternoon, making quick work of the corn harvest at the Erlin Ellison farm north of Vermillion. Four combines, several trucks, tractors and a crew of over 20 neighbors finished the work at approximately 2 p.m. 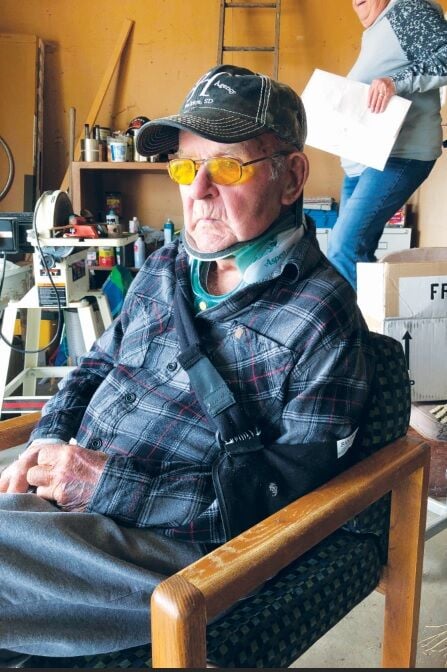 “It’s overwhelming when the community gets together,” Erlin Ellison said as his neighbors gathered at his farm Tuesday to harvest his corn crop. Erlin was injured in a traffic accident last month. 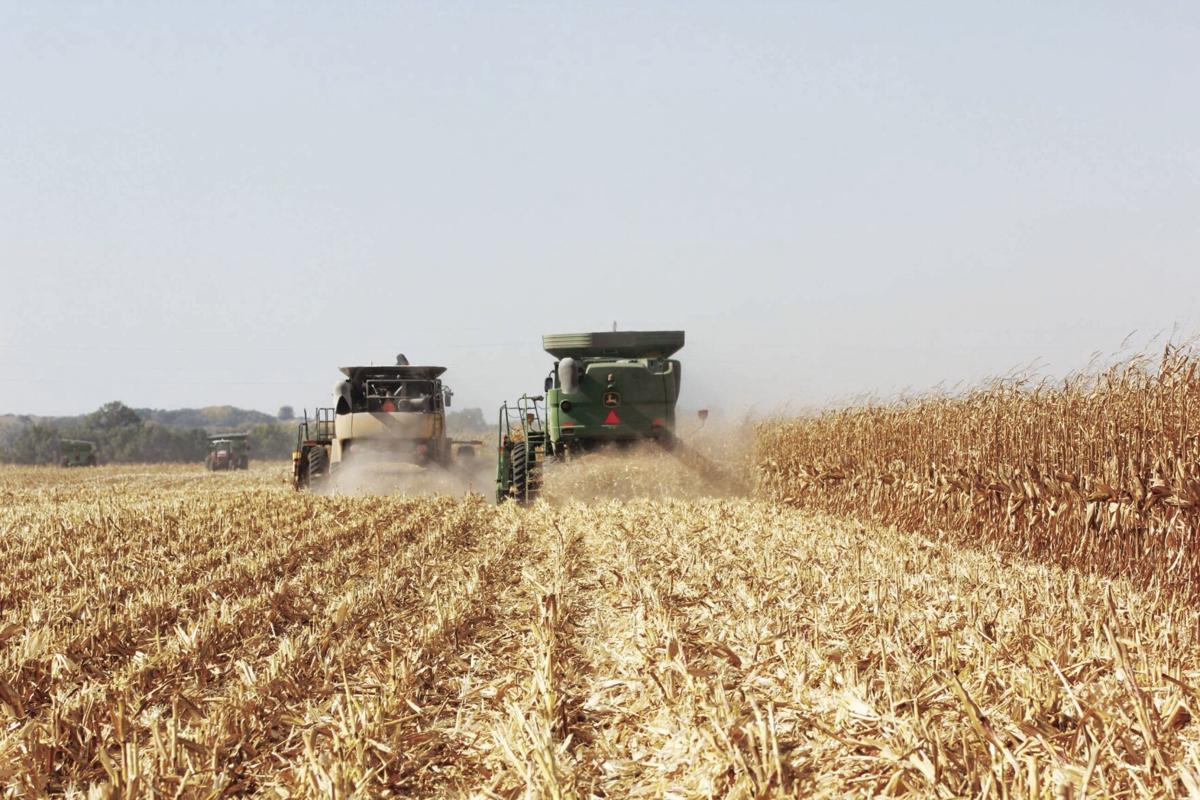 Unwanted stalks and chaff tumble from the back of a John Deere combine and a New Holland combine as they work in unison Tuesday afternoon harvesting corn at Erlin Ellison’s farm.

A John Deere combine and a New Holland combine operate in unison Tuesday afternoon, making quick work of the corn harvest at the Erlin Ellison farm north of Vermillion. Four combines, several trucks, tractors and a crew of over 20 neighbors finished the work at approximately 2 p.m.

“It’s overwhelming when the community gets together,” Erlin Ellison said as his neighbors gathered at his farm Tuesday to harvest his corn crop. Erlin was injured in a traffic accident last month.

Unwanted stalks and chaff tumble from the back of a John Deere combine and a New Holland combine as they work in unison Tuesday afternoon harvesting corn at Erlin Ellison’s farm.

Take a drive out in the country near Vermillion this week and one sight is common: clouds of dust following combines as local farmers sweep up their soybean and corn crops during a stretch of unbelievably mild weather.

This active time of the year is yearned for all summer long by area farmers. It is the worst time for a farmer to get banged up.

That’s what happened to Erlin Ellison, though. The 86-year-old, who operates a family farm approximately 10 miles north of Vermillion, was in a traffic accident last month that injured the vertebrae under his skull.

He lived to tell the tale of his accident, which happened when he had harvested all but about six acres of his soybean crop. He’s not home yet on a full-time basis as he needs further medical care in a local hospital to recover.

It’s difficult to heal, however, when your corn crop is still in the field, rustling in a South Dakota breeze.

That all changed Tuesday. Many of Erlin’s worries were lifted allowing his body to be more on the mend. He was able to return to his farm that morning to watch an act of selflessness play out in his corn fields.

It all started when neighbors Danny Johnson and Dick Nissen, realizing that Erlin’s corn was ripe for the picking, started making phone calls asking people to show up at Erlin’s farm. An army arrived made up of over 20 women and men and various machinery, including four combines, grain carts and tractors to pull them and over 10 semi-trucks. The trucks took the freshly combined corn to the Poet ethanol plant near Hudson.

The combines attacked the fields relentlessly; the common clouds of dust seen in area fields this week were uncommonly large on Erlin’s farm Tuesday because four combines were operating at once. The crew demonstrated that many pieces of machinery and the men who operate them, acting together, make light work.

While men were busy in the field, another component of the work crew – several area women – were busy, too, making sure that everyone got a chance to rest for a bit late in the morning. They all enjoyed a meal of sandwiches provided by Valley Ag of Gayville and Madsen Spraying, served in Erlin’s garage, before their tractors and combines and trucks roared to life once again, heading out to the field where work remained to be done.

Early Tuesday afternoon, a John Deere combine and a New Holland combine worked in unison, harvesting corn with the unwanted stalks and chaff tumbling from the back of the machines.

Three of the combines’ owners and operators included Rick and Barry Peterson, Eldon Johnson, who is Danny Johnson’s 92-year-old father, and Dick Nissen.

Further north in the same field, Bob Madsen, who farms five miles north of Meckling, was operating the fourth combine without a partner tagging alongside. Bob said he first heard last week that help was needed on Erlin’s farm.

“I talked to Danny Johnson and Dick Nissen and just let them know that we had equipment to help whenever they decided what they were going to do,” he said. “We got started about 9 o’clock (this morning) and it doesn’t take long with this much equipment.”

Bob estimates that Erlin had approximately 160 acres of corn and Dick and Danny helped everyone get a good start on the harvest Tuesday by opening the fields.

“They had some of it done; they had the fields opened up, they did the end rows, so it enabled us to get things done pretty fast,” he said.

There wasn’t much corn left in the northern part of the field where Bob was working. The other two combines working together on a larger area of cornrows were also making great progress.

“We stopped for lunch … we had a nice meal together and we’re going to be done in good shape. As a matter of fact, I just got about one round left is all,” he said with a laugh. “There are a number of people who have trucks and they’re hauling it all to the ethanol plant in Hudson. There are lot of people here today helping out.”

As he spoke early Tuesday afternoon, the sun was shining brightly. There was a bit of wind, typical for South Dakota and the temperature had climbed above 70 degrees.

It was a perfect day.

“There’s a chance of rain tomorrow, so this all worked out good,” Bob said.

Back at the farmstead, Erlin sat in the garage as women who came to his farm were cleaning up and taking down tables after serving a meal to all the workers earlier.

He was home that day, able to participate in this year’s harvest by watching from the sidelines.

He was a little more exact in describing the number of acres being harvested. The combines were in a 90-acre field of corn early that afternoon.

“There’s about 160 (acres) in two different places,” Erlin said, noting that the volunteers had harvested about 70 acres earlier that morning. He added that his farm also includes another quarter section of land about a mile west.

His grandfather bought the farm in 1889, his dad was born on the farm and he and his brother operated it for several years.

Erlin described himself as “the next generation” to operate the farm. He doesn’t know exactly when he formally became its chief operator.

“I know I farmed some of those dry years and then I went to the Army for two years and came back,” he said. “I’ve farmed ever since, I guess.”

Erlin has to wear a neck brace and has one arm in a sling as he recovers from the injuries of his traffic accident.

He had nearly all his soybeans out of the field before his accident.

“I had the beans just about combined when I had that accident,” Erlin said. “I had seven acres left, I think it was. Today, the neighbors came in and took care of everything for me.”

He said he mentioned to Dick Nissen sometime after the accident that he wouldn’t be able to harvest his corn.

“And I don’t know who was the first one who organized all of this, for sure,” Erlin said.

He knew one thing was certain Tuesday afternoon.

“I’ve got a lot of good friends,” Erlin said, the look on his face expressing his feelings as he struggled to find words that were adequate. “It’s overwhelming when the community gets together.”

“Between Danny and Dick Nissen, they’ve done a heck of a job pulling everyone together and getting them here,” Erlin said.

“I’m a neighbor; I live about a half mile away from Erlin,” Danny said when contacted by phone Tuesday night. He talked about how he and Erlin would eat lunch together at least once a week before the accident and Erlin would stop by his place occasionally.

Danny began reciting the names of people who helped earlier that day and it became apparent that he likely couldn’t mention everyone’s name simply because of the size of the day’s workforce. Plus, he was fearful of omitting people’s names.

It also became apparent that Tuesday was a perfect example of neighbors coming together to help a fellow neighbor. Those who showed up include Gregoires and Madsens and Petersons and Henriksons, along with Nissens and a Sample and at least one Lindblom.

Danny’s 92-year-old dad, Eldon, operated one of the four combines that day.

“My mom is the same age as Erlin and she was out there helping to put the food together,” he said, “along with a lot of other ladies from the community.”

He estimated a total crew of between 25 and 30 men and women helped make the harvest a success.

“It was kind of a family affair; it was made up of maybe five or six different families and their wives and kids, basically,” Danny said. “Dick Nissen was the head guru; I helped him with it, but he was the one who ram-rodded it and got everything going.

The combines finished their work at about 2 p.m. Tuesday.

“The trucks maybe weren’t all unloaded, but the combines were all headed home at about 2 o’clock,” he said. “We took out about 160 acres in about three-and-half to four hours. Believe it or not, everything went smoothly and I don’t think there were any accidents and I don’t think anybody broke down.

“It worked out really well and it was a beautiful day,” Danny said.