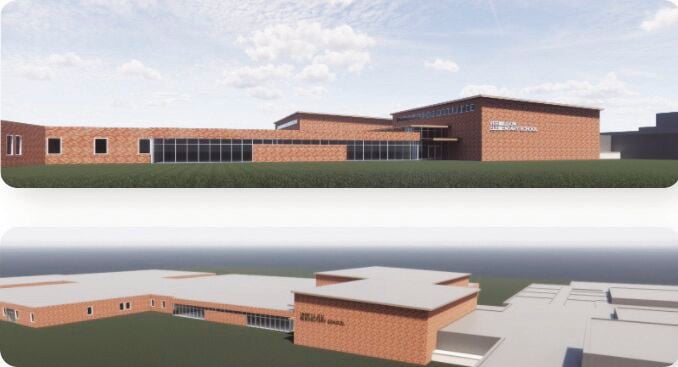 These architectural renderings show how the exterior of the proposed new elementary school in Vermillion may appear, should voters approve the issuing of bonds to fund its construction. The new building would replace Austin and Jolley schools. The two school buildings were constructed approximately 67 years ago. 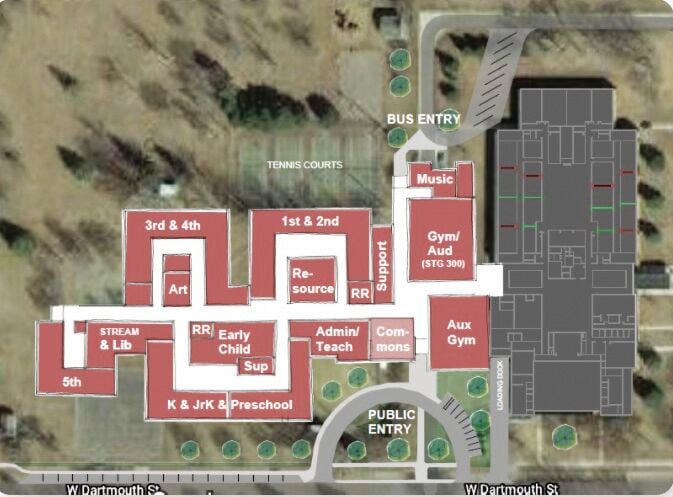 These architectural renderings show how the exterior of the proposed new elementary school in Vermillion may appear, should voters approve the issuing of bonds to fund its construction. The new building would replace Austin and Jolley schools. The two school buildings were constructed approximately 67 years ago.

The Vermillion School Board agreed Monday night it was time.

After receiving input from three recent public meetings and also from a special web page that provides detailed information and allows school district patrons to seek answers to questions, the board decided to take action.

It approved a resolution calling for an Oct. 5 election in which voters living within the school district will be asked to approve a $26 million bond issue to finance the construction of a new elementary school in Vermillion.

“One of the questions that people have been asking is, really, when will we make the decision to move forward?” Superintendent Damon Alvey told board members, “and before the board this evening is an abstract of the minutes with a proclamation to move forward with a $26 million bond for 30 years.”

The motion approved Monday night contains information from the night’s meeting that states it is the board’s intent to move forward with an Oct. 5, 2021 proclamation to go forward with a school bond election, he said.

“Then, from this point forward, you will see at future meetings the timelines that would be necessary to make sure we have the correct dates for voter registration and the sample ballot … those would be the things that we would create and put out for the public to view along this journey over the next couple of months,” he said.

School Board Vice President Tim Schwasinger, who was leading Monday’s meeting because President Doug Peterson was absent, read a major portion of the proclamation aloud to allow the public to be informed on what the board was considering.

“What I’ll accept a motion on is this following resolution … This is a resolution declaring necessity and expediency for issuance of general obligation school bonds, calling an election, therefore, and hiring professionals in connection, therewith.

“Be it resolved by the School Board of Vermillion School District 13-1, Clay and Union Counties, Vermillion, SD, as follows:

“Declaration of Necessity: It is hereby found, determined and declared that it is necessary and expedient for this school district to borrow money by issuing its general obligation school bonds in an amount not exceeding $26 million payable from not and not to exceed 30 years from date of issuance, bearing interest payable at such times and such rate or rates as may be determined by this school board for the purpose of financing school facilities including:

“One – The construction of a new elementary school.

“Four – The infrastructure cost of utilities servicing the new buildings.

“Five – The furnishing and equipping of the same, and

“Six – The cost of issuing the bonds if so approved by the voters.

“The election, the question of authorizing the issuance of such bonds shall be submitted to the qualified electors of the district at a bond election which will be held the fifth day of October, 2021, between the hours of 7 a.m. and 7 p.m. The question shall be in substantially the following form:

“Shall the Vermillion School District 13-1 … issue its negotiable general obligation school bonds at a principle amount not exceeding $26 million issued in one or more series bearing interest at such rates as may be determined by the school board, payable at maturing at one and not to exceed 30 years after the date of issuance for the purpose of financing school facilities, including construction of a new elementary school, improvements to the existing middle school facilities, site work and infrastructure improvements, the furnishing and equipping of the same and the cost of issuing the bonds. Shall the above proposition be approved and the bonds issued?”

The resolution was approved unanimously by the board.

“Just to note, since Doug is not able to be with us tonight, he and I did visit by phone and he said he is very much in favor and said that he saw no reason that he would not have voted positively for that,” Schwasinger said. “Thank you very much, and I anticipate a big thank you from the community come Oct. 5.”

Earlier during Monday’s meeting, Alvey noted that three, well-attended public hearings to discuss the bond issue with local citizens had recently been held.

“We appreciate people who have come out to ask questions and find out more about the project,” Schwasinger said. He added some good news, so to speak, as he referred to comments he made at May’s school board meeting indicating that the bond issue may need to be total more than $26 million.

“A month ago at our meeting here I talked about the fact that through the supply chain dynamics and the pandemic and everything that that has done to construction costs and everything that we were not sure that we could stick with our $26 million proposed amount,” he said. “What we have found since that time is that we can, indeed, stick with that $26 million amount.

“To be transparent to the public, it likely will cost more than $26 million but what we have done is visit with our bond representative … and since we don’t know exactly what will happen to supply chain and construction costs,” Schwasinger said, “– maybe we need $2 million more, maybe we need $4 million more – we as a board can issue capital outlay certificates at the time they are needed, not having to go back to the public and ask for more money.”

The $26 million figure included in the resolution “is strong and fast. As a reminder, that is $160 per $100,000 assessed property value,” he said, describing the increase in real estate taxes that would come about should the bond issue be approved, “and that is static, whether that be agricultural land, commercial land or residential. We just want to be very transparent about that.”

It is exciting, Schwasinger said, that the school district has the financial flexibility to deal with possible higher than anticipated costs without placing a higher burden on taxpayers, should the bond issue be approved.

“That’s a credit to prior boards and the district, in general, being frugal all the time. That helps us do things like this in a very disciplined way,” he added. “The market for bonds – it’s a good time to borrow money if there is a good time to go into debt – it makes this very doable.”

Schwasinger added that there may not be much discussion about the bond issue during the summer months.

“As we get to August and we’re getting ready for the next school to start up, we will start with continued education to the public. If you need a refresher on any questions, you can go to vermillionschoolbond.com and look at that information. We appreciate you taking the time to check that out.”

Last April, the school board made it known that it would likely ask the public to approve an estimated $26 million bond issue to construct a new elementary school to replace the Jolley and Austin elementary schools.

“For several years, we’ve debated this topic in our facility plan,” said Schwasinger back in April. He serves on the district’s Facilities Studies Committee that has been reviewing options regarding the two elementary school buildings.

“The conclusion of the committee has been that it is time to replace those two aging elementary buildings,” he said in April. “What we are proposing and the board will have to make this a formal proposition in months to come as we get through the education process with the community, but we would propose a $26 million bond issue over a 30-year time frame.”

“I’ll just add,” Jim Peterson, a member of the school board said Monday night, “that after the public meetings, everything has been positive. I’ve reached out to a few groups in town and it’s all been positive. I believe the web site is updated with the last couple of questions they’ve had, so if they go to vermillionschoolbond.com – it’s been updated.

“Just to recap: we’re going to go forward with $26 million. Hopefully that is enough with the supply chains, but if not,” he said, “we can do it (provide additional funds, if needed) through some capital outlay certificates to augment anything we need.

“It’s a very good plan that’s been laid out and we just go from there,” Peterson said.

“It’s my understanding that these conversations have been happening for some time in our community,” Carol Voss-Ward, school board member, said, “and so I appreciate all the work that has gone in to getting to this point.”