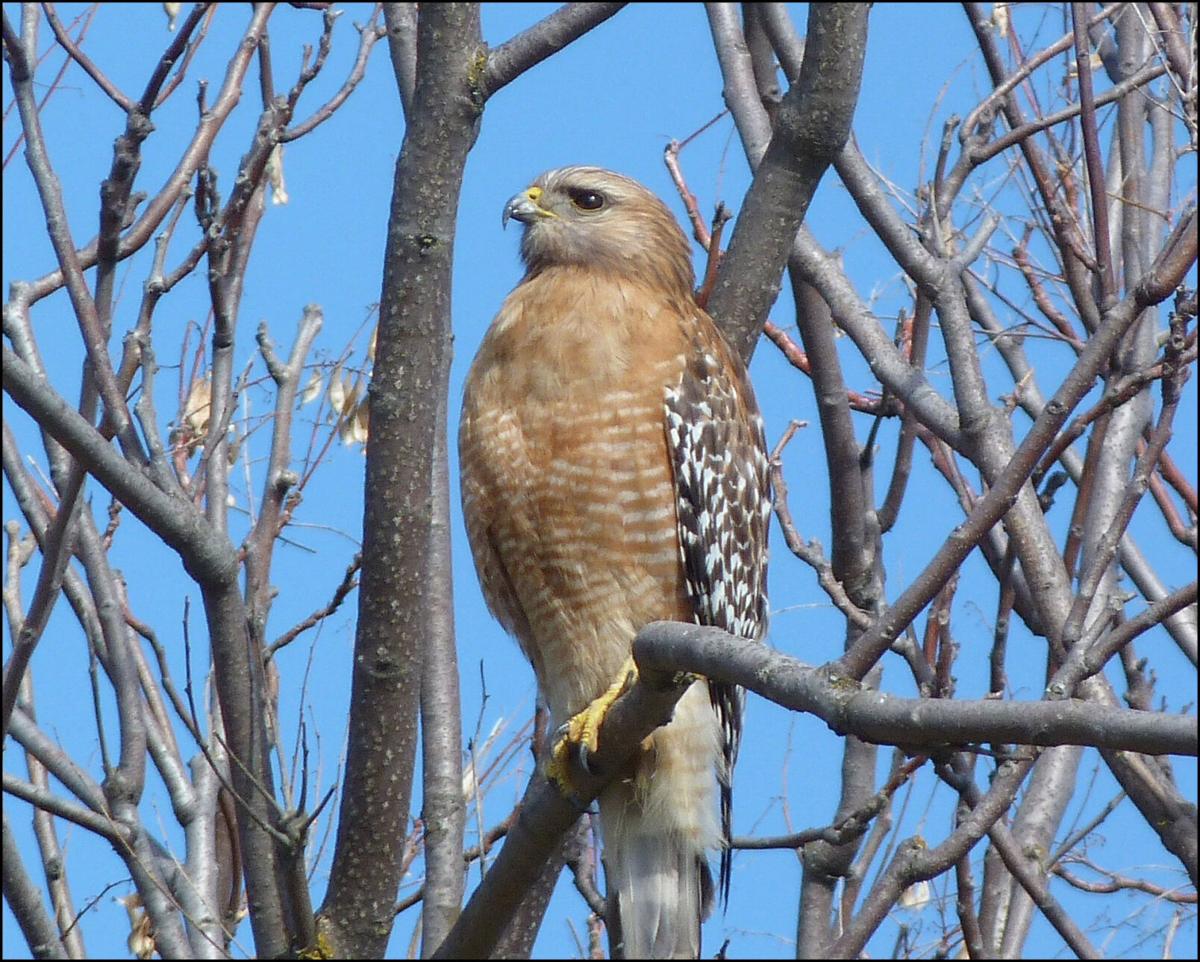 This stock photograph shows a Cooper's hawk in all of its splendor. Thanks to Lori Kat Gregory, we know that at least one of the majestic birds makes frequent visits to Prentis Park in Vermillion. 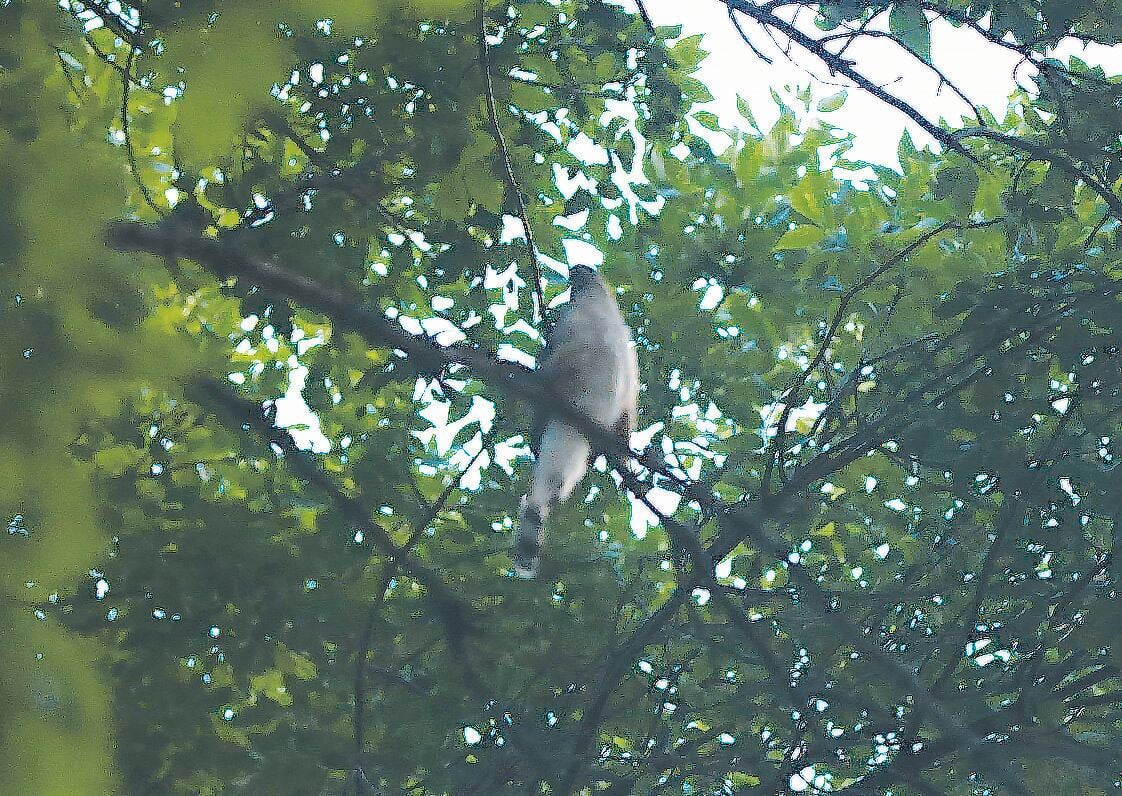 This stock photograph shows a Cooper's hawk in all of its splendor. Thanks to Lori Kat Gregory, we know that at least one of the majestic birds makes frequent visits to Prentis Park in Vermillion.

Newspaper editors and reporters receive what can be dubbed as “eccentric” story ideas all of the time.

I remember during my very first newspaper job, when I was a green cub reporter at a South Dakota weekly publication, a man walked into the newsroom one day with a tomato he had grown that summer. He claimed it looked like Richard Nixon.

This was at about the time of Watergate, so the whole world knew what President Nixon looked like except, apparently, this guy. Plus, while talking with him, I was struggling mentally, asking myself, “How do I write a story about a tomato?”

Eventually, feeling discouraged, the man left. I felt good about myself. I could get back to writing about the important, although not highly exciting news of the day: a repair project on Main Street, followed by a report on what had happened at the school board meeting the night before.

What I didn’t know was that Bruce, my publisher, a seasoned newsman, had witnessed my conversation with the tomato gardener.

“I know you’ve got other stuff to do,” he said, “but you just let a good story get away.”

“Keep typing,” he said. “I know you’ve got deadlines to meet. But think about it.”

I share this tidbit of my early, on-the-job experience because Monday I found myself more or less demonstrating that I’ve not learned a thing over the years.

That afternoon, I received a phone call from Lori Kat Gregory, a Vermillion woman who walks her dog through Prentis Park at about 5:30 every morning.

For much of this past month, she said, she has encountered a Cooper’s hawk in the park. The hawk hasn’t bothered her or her dog, Lori said. He has a favorite tree that he usually sits in where she finds him every morning. She talks to him, Lori said, and he talks back. She called because she thought the fact that a Cooper’s hawk, a bird of prey, is making his home in our community’s most popular park, is kind of neat and maybe warranted a human interest story.

I’m afraid I gave Lori the cold shoulder. I remember telling her that her idea wasn’t that viable; I think I described her suggestion as being “on the fringe” when it came to something I’d write about.

As soon as I hung up the phone, I began reliving that tomato experience from years ago. My very first boss has been retired for decades and lives in California, but it was as if he was standing in my office.

I kept hearing his voice, over and over. “You just let a good story get away,” he kept saying.

Then, I found a message Lori had left me on the Plain Talk’s Facebook page. It included information about a Cooper’s hawk and she even sent an audio clip of its unique call.

“Outside of the breeding season, Cooper’s hawks tend to be silent,” she wrote. “They are one of most fearless hawks as it will actually let you get close. I stand below the branch he’s on and talk to him. He’s never tried to dive bomb me or my small 20# dog. He’ll stay there as long as I talk to him. Any other hawk will fly away as you walk toward it even if you’re a hundred plus feet away.”

“Hawks have a real ear-piercing, weird sound,” Lori said, “and when I first heard this bird, I thought ‘What is that? It’s not a hawk,’ but it turns out it was.”

Having watched too many Western movies, I had concluded that every member of the hawk family simply let out a long, high-pitched “caw” sound. That’s hardly the case with a Cooper’s hawk.

Ornithologists note that this bird’s most common call is a loud, grating cak-cak-cak, 2-5 seconds long, given by both sexes in defense of the nest. This call is also given during courtship.

The sun hadn’t risen yet when we stepped into the park, but the sky had turned into that pre-dawn, milky color and Prentis Park sounds like a bird paradise at 5:30 a.m. It’s as if every songbird imaginable is awake at that time and they’re all tweeting each other -- 280 characters at a time.

With this birdsong going on all around us, Lori and I continued our stroll, hoping to hear that cak-cak-cak.

During our walk, she mentioned that she first heard the hawk about two weeks ago and I had to agree that a Cooper’s hawk doesn’t really sound like a hawk.

“When you first hear it, you would think you’re in a Brazilian rain forest,” she said. “That’s what I thought, because it’s so different from the other birds here. It’s just so different from any other bird here and mostly you hear the robins in the morning.”

Lori said her first encounter with the hawk simply left her curious.

“I heard the sound, I heard the bird and I thought, ‘I don’t think it looks like a hawk,’” she said.

When Lori returned home, she researched hawk sounds in South Dakota and learned, upon hearing a recording of its unique call, that she had encountered a Cooper’s hawk.

We were walking toward an area of the park where she usually finds the hawk, but clouds had darkened the sky a bit and she worried that would keep him away.

“I think it’s a male and it may be a breeding thing, because he’ll sit for a while and call there and then he’ll fly to another tree and do it,” Lori said.

We had a chance to talk about more than birds. Pal, the dog, is 11 years old, and is a cockapoo Old English sheep dog, according to DNA tests.

“You’d never know it, but she herds us,” she said.

Lori moved to Vermillion about a year ago, right about when the COVID-19 pandemic was beginning to spread through South Dakota. She was born in Watertown, but hasn’t lived long in South Dakota.

“I have kind of a legacy with this town because my grandfather went to college here in 1928. Then my two aunts went to school here,” Lori said.

Those aunts would meet men who would eventually become her uncles.

Today, she lives near the frat house that was once her grandfather’s home.

She asked me how long I’ve been in the newspaper business and she learned I’ve been reporting for most of my adult life and I’ve worked in Vermillion for the past 25 years. I admitted I was getting a bit ‘long in the tooth,’ but I’m not ready to stop working yet.

By now, we were near the tree where the Cooper’s hawk usually can be found. The early morning light was dim, but there seemed to be no hawk in the tree and we weren’t hearing the bird’s distinct sound.

Lori mentioned the very first time she saw the bird.

“I’m walking toward a bird of prey and thinking, ‘As I get closer to him, that’s it. He’ll be gone.’ But I’m walking and talking to him and he does not go anywhere,” she said. “I mean, I get right under the branch and he does not fly away.”

Lori gets chills, she said, every time she sees a majestic bald eagle in flight, so she couldn’t pass up that first opportunity she had to get as close as possible to the Cooper’s hawk.

She finds Prentis Park to be a lovely place to give Pal a walk every morning and meeting up with the hawk is simply a bonus to that great experience.

Lori learned that my wife and I have no pets, mainly because of allergies, but I mentioned that my daughter, Sarah and her husband, Erik, who live in Elk Point, are overrun with dogs and cats that they “babysit.” They love to do it and I eventually shared Sarah’s phone number with Lori as a potential “sitter” for Pal.

By now, 15 minutes had passed and we began to worry that Tuesday morning may be a hawkless one in Prentis Park.

He called again and we walked toward the sound.

“He’s usually a lot more vocal. He must be hunting,” Lori said.

Soon, it sounded like he was nearly above us.

“Where are you, buddy?” she said, directing her question to the treetops, hoping the bird would respond.

A man driving what I thought had to be the loudest motorcycle possible drove past the park on Prentis, and turned west on Main, roaring the whole time. Surely, I assumed, that had to scare the bird away.

The Cooper’s hawk called again. He was right above us. I could see him in the dim light; Lori hadn’t spotted him and I tried my best to point out his location while also aiming my camera the bird’s way in the pre-dawn light.

My pre-dawn photography skills, I learned, are lacking and the Cooper’s hawk decided not to stick around long enough for me to get a bead on him.

We both watched as he took off, loudly chattering and flew east across Prentis Street toward a tree behind a house.

I thought maybe the sound of my camera had scared him away and Lori assured me it didn’t.

Lori was thrilled that I photographed the bird, brushing aside that it wasn’t a clear image.

“That is awesome! Who cares if it is in focus?” she said.

It was time for Lori and Pal to begin their walk home, but she summed up our time together.

I made sure Lori knew the morning was a fun experience for me, too.

It was more than just “fun,” though.

I had not let a worthy experience “get away.” I had just taken an early morning stroll through a beautiful park surrounded by a symphony of bird songs.

I heard, encountered and attempted to photograph a Cooper’s hawk.

Best of all, I made a new friend.