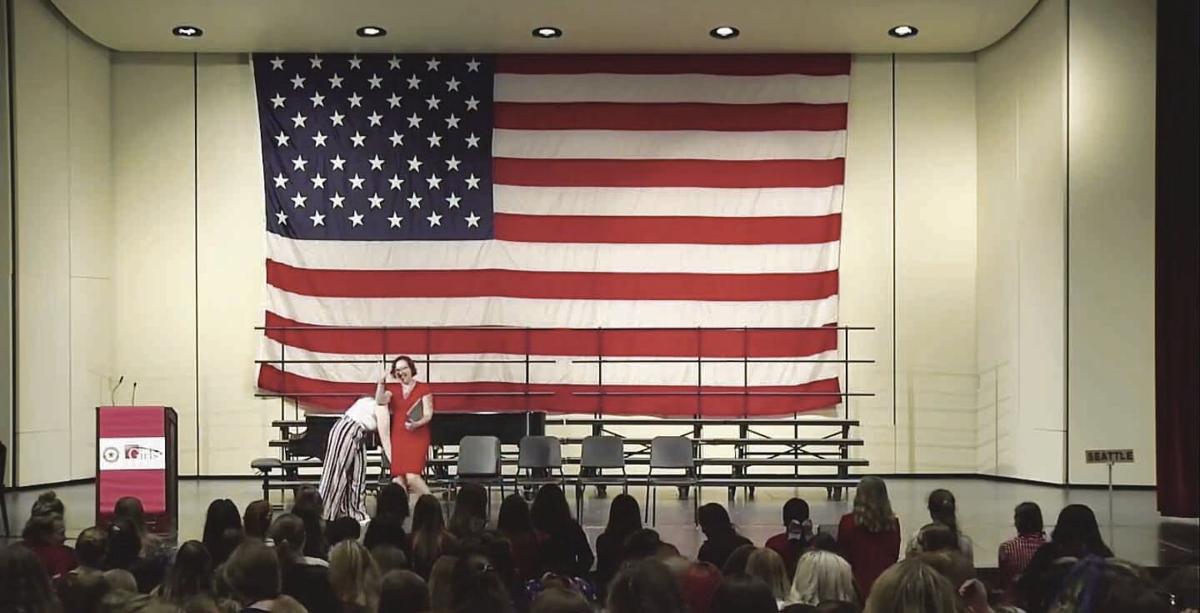 Vermillion Mayor Kelsey Collier-Wise waves to delegates of the 2021 session of the American Legion Auxiliary-sponsored Girls State program Friday, June 4, before she left the stage of Aalfs Auditorium on the University of South Dakota campus at the conclusion of her talk. 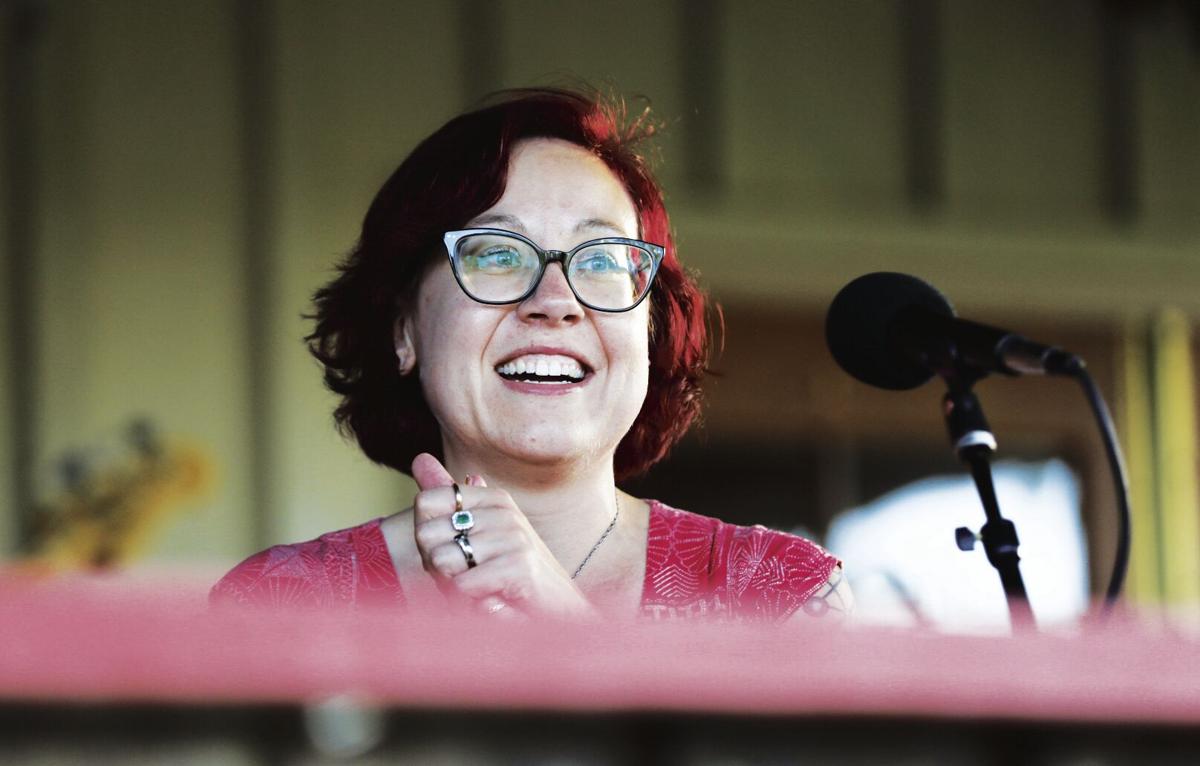 Kelsey Collier-Wise addresses people who turned out for an event held at Valiant Vineyards Friday to support her campaign for mayor. She won in a five-person race for the office Tuesday, receiving approximately 52 percent of the vote.

Vermillion Mayor Kelsey Collier-Wise waves to delegates of the 2021 session of the American Legion Auxiliary-sponsored Girls State program Friday, June 4, before she left the stage of Aalfs Auditorium on the University of South Dakota campus at the conclusion of her talk.

Kelsey Collier-Wise addresses people who turned out for an event held at Valiant Vineyards Friday to support her campaign for mayor. She won in a five-person race for the office Tuesday, receiving approximately 52 percent of the vote.

“I’ve got a very ‘Leslie Knope’ approach to city government,” she said in response to a Girls State delegate’s question. “I get excited about it. I think it's awesome and it’s because it’s the closest you can get to actually making a difference in people’s day-to-day lives.”

Leaders who work on the state and national level sometimes get bogged down in issues without seeing how they benefit people, Collier-Wise said.

When one can accomplish good things on a local level, the reaction is so much more immediate, she said.

She used the city’s recently constructed Prentis Plunge aquatic center as an example.

“We’re very proud of it and when that was completed and we got to see the kids go in the pool for the first time and get so excited about it, that was really awesome,” Collier-Wise said. “When you’re in Congress, you don’t necessarily get to see your friends and neighbors enjoy something that you had a hand in creating.

“That’s one of the things that makes it the best to me,” she said. Plus, she said, you’re always in touch with other members of your community.

“You always hear about politicians ‘going Washington.’ Well, your local politicians have to see you at the grocery store. They can never stop listening to their constituents,” Collier-Wise said. “None of us (the city council) do this as our full-time job … and it’s just a lot more responsive.”

Earlier in her talk, she described herself as often serving in an understudy role. Her position as mayor, before Tuesday’s election, was by appointment. Her presence at Friday’s Girls State gathering also came up last minute; she was asked to fill in after a schedule change.

The 2021 session of the American Legion Auxiliary-sponsored Girls State program began May 31 at the University of South Dakota campus in Vermillion and concluded June 5..

“It is 100 percent in line with my philosophy about leadership,” Collier-Wise said. “When people need someone to jump in at the last minute, to take the reins when the train has gone off the track -- I realize I’m mixing my metaphors here -- they’re going to look to someone dependable, someone who will read up, show up and do the work, so I always take it as a compliment.”

Those characteristics include aggression, empty charisma, ambition for its own sake, confidence masquerading as competence and being a lone wolf or a maverick.

“These are not just attributes that make a person unpleasant to be around -- although they do -- they actually lead to poor performance for the team that’s being led and the goals of the organization, whether it’s government, a non-profit or the private sector,” Collier-Wise said.

The author of the book, who happens to be a man, she said, noted that many leaders who have those attributes happen to be men and that the traditional solution “that we’re sold to achieving parity for women in government and business is that we should embody those characteristics.

“The result of that has been that we’ve just seen more incompetent women join incompetent men in leadership,” Collier-Wise said. “They make selfish decisions or they hurt their product or their constituents and then they just get replaced by the next model.”

Attributes correlated to effective leadership, according to studies, are more stereotypically associated with women but certainly not exhibited by women exclusivity, she said. They include team building, cooperation, integrity, humility and empathy.

“These are things that most of you already have in spades, things that people will try to convince you to abandon, things that you will question as you progress through your education, our life and your career,” Collier-Wise said, “and I hope you can resist that. I hope that you can tune out the people that will tell you that you are going about leadership wrong because you choose kindness or compromise.”

A delegate asked her if she’s always known that she wanted to someday enter politics.

“I was always interested in politics -- it’s something I’ve always cared about, but I definitely always saw myself as a behind-the-scenes person,” Collier-Wise said. “I worked on a lot of campaigns, starting in high school through college and I worked for Stephanie Herseth-Sandlin in her congressional office, but I always thought it would always help other people or work on campaigns.”

One day, years ago, she and a bunch of neighbors got together to talk about who, among them, was going to run for Vermillion City Council.

“I kind of drew the short straw; everybody else had an excuse not to do it and I said, ‘I’ll do it, I guess,’ and it ended up being really rewarding,” Collier-Wise said, in ways that she had never thought of before.

She described Mayor Jack Powell, who died in April 2020, as a mentor.

“He would always keep encouraging me,” Collier-Wise said. “He would say, ‘We need somebody for council vice president. Would you be interested in that?’ I never would have put myself out there. I never thought it was my time or my turn, but he encouraged me through that process and started asking me when I was going to run for mayor.”

She told the Girls State delegates that she would constantly reply that she wasn’t ready yet.

“That’s a frequent thing that we tell ourselves -- that we’re not ready,” Collier-Wise said. “I’m really thankful to have mentors like that in my life that push me further than I would see myself going.”

She added that she doesn’t foresee herself holding anything more than local office.

“I love Vermillion. I don’t really like to leave it very often and I’m really, really passionate about my day job,” Collier-Wise said.

She is executive director of the United Way of Vermillion and was instrumental in the formation of the Community Connection Center (CCC) in downtown Vermillion, which opened in the fall of 2019.

The CCC today houses the Vermillion Food Pantry, the Welcome Table and its related backpack programs, the Salvation Army and its emergency fund and the United Way.

The CCC has also struck up a partnership with the Health Sciences program at the University of South Dakota. “City government helps people, but when I leave here (the Girls State gathering), I’m going to see people coming into the Food Pantry,” Collier-Wise said. “They didn’t have food and they’re going to have food. There’s nothing more rewarding than that to me.”