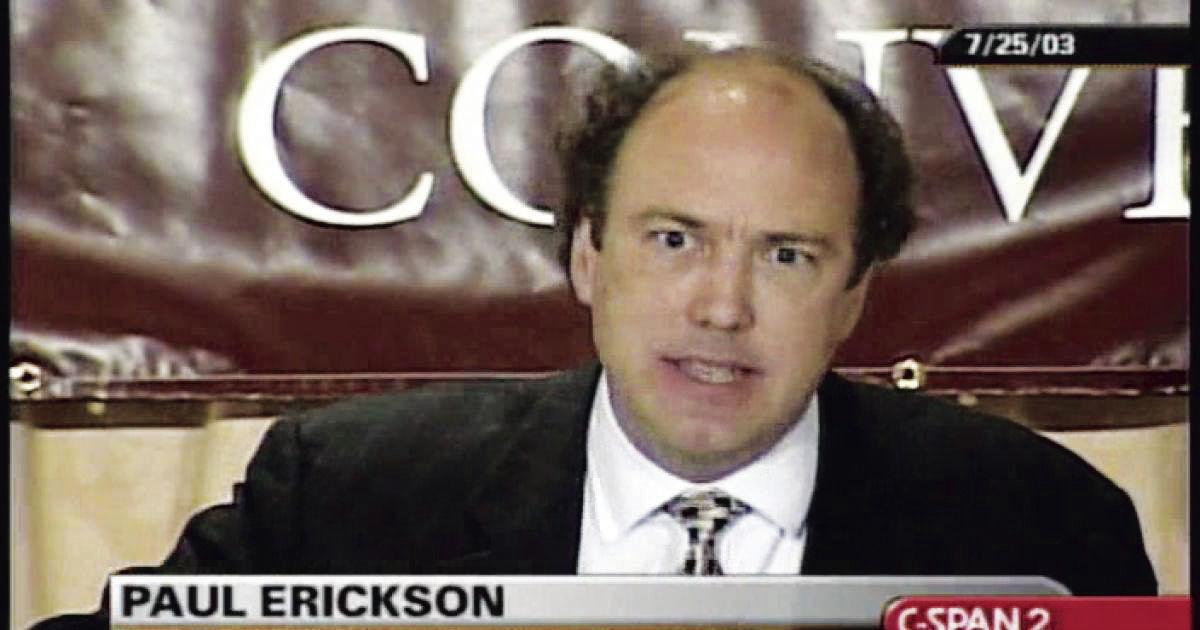 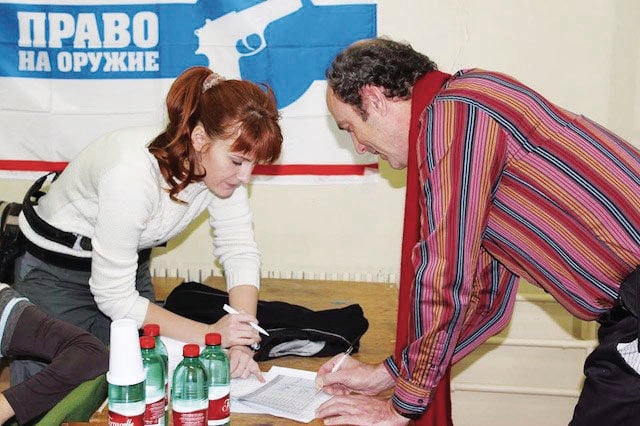 Maria Butina and Paul Erickson are pictured together at a gun event in Moscow. Butina posted this photo on social media on Nov. 1, 2013. In September of 2014, Erickson, an NRA member, GOP operative and Butinas boyfriend, reportedly attended a forum in Moscow organized by Right to Bear Arms, a guns rights organization in Russia founded by Butina.

Maria Butina and Paul Erickson are pictured together at a gun event in Moscow. Butina posted this photo on social media on Nov. 1, 2013. In September of 2014, Erickson, an NRA member, GOP operative and Butinas boyfriend, reportedly attended a forum in Moscow organized by Right to Bear Arms, a guns rights organization in Russia founded by Butina.

Vermillion native Paul Erickson, who made headlines in July 2018 when his Russian girlfriend, Maria Butina was arrested on charges of conspiring to infiltrate American political groups on behalf of Russia, has plead guilty to one count of wire fraud and one count of money laundering.

His federal charges and guilty plea are not related to Butina’s activities that include conspiring with a Russian official to make inroads with U.S. political groups.

Erickson, 57, of Sioux Falls, was indicted by a federal grand jury on a total of 11 counts of wire fraud and money laundering last February. He appeared before U.S. Magistrate Judge Mark A. Moreno on Feb. 6, and pleaded not guilty to the indictment at that time.

According to a factual basis statement signed by Erickson and his attorney, Clint L. Sargent on Nov. 15, Erickson stated that he solely operated the business venture to develop land in the Bakken oil fields in North Dakota.

“Through my business, I became acquainted with several individuals with whom I developed strong professional and personal relationships,” Erickson states in the Nov. 15 court document. “I approached many of these individuals about investing in my business.

“However, I falsely represented to investors that I would use the money to purchase real estate and the construction of single-family home in North Dakota, which I did not do,” he added.

Erickson admits in court papers that on March 1, 2017, he accepted a $100,000 wire transfer from D.G. that was deposited into his Wells Fargo bank account.

“This was supposed to be an investment in my business. I represented to D.G. that the money would be used for the development of real estate in North Dakota and that the amount would be repaid no later than Aug. 28, 2017,” Erickson states in the court paper. “My representations to D.G. caused him to wire transfer $100,000 to my Wells Fargo bank account on March 1, 2017.

“However, I did not invest the money from D.G. into the Bakken oil fields venture and I did not repay D.G. any of the money he paid me,” he states. “Furthermore, from the $100,000 I received from D.G. … I conducted a financial transaction and transferred $1,000 to M.B., as alleged in Count 8 of the indictment.”

No further identification is given in court papers to the individual known as M.B., but Erickson was in a relationship with Maria Butina.

Over A Decade Of Schemes

According to the federal indictment filed Feb. 5 with the U.S. District Court in South Dakota, Erickson was active from 1996 to August 2018 in devising schemes to fraudulently obtain money.

The court papers state that Erickson he operated several businesses in recent years, including Compass Care, Inc., Investing With Dignity, LLC, and the venture to develop land in the Bakken oil fields in North Dakota. A grand jury in February found that Erickson used these businesses to defraud investors.

He told investors in Compass Care, Inc., for example, that returns on their investment in the company would be repaid within a year. Erickson promised to personally repay investors the original amount they had paid if the returns failed to materialize. He made several other claims about the company that weren’t true.

A grand jury found that Erickson’s business “Investing With Dignity, LLC” was also used to defraud investors. Erickson claimed the company was in the business of developing a wheelchair that allowed people to go to the bathroom without being lifted out of the wheelchair.

He told investors in this company that they would double or triple their original investment in six months to a year.

The February indictment also lists his Bakken housing scheme in North Dakota. He formally changed his not guilty plea regarding this scheme to guilty during Tuesday’s hearing in Sioux Falls.

The indictment lists over 20 examples from April 1999 to May 2017, in which Erickson deposited over $1.2 million to the accounts of his three fraudulent businesses or to his personal account with Wells Fargo Bank.

From October of 2014 through March of 2017, Erickson also made money laundering payments to several individuals which involved the proceeds of his unlawful wire fraud.

According to a February news release from the U.S. Attorney’s Office, the maximum penalty upon conviction is up to 20 years in federal prison for each count, and/or a $250,000 fine for wire fraud, and/or a $500,000 fine for money laundering, three years of supervised release, and up to $1,100 to the Federal Crime Victims Fund. Restitution may also be ordered.

The investigation was conducted by the Federal Bureau of Investigation and the Internal Revenue Service Criminal Investigation. Assistant U.S. Attorney Jeffrey C. Clapper prosecuted the case.

Erickson grew up in Vermillion and has had a Sioux Falls apartment in recent years. He is a 1979 graduate of Vermillion High School who holds a bachelor’s degree from Yale and a law degree from the University of Virginia.

His colorful life prior to his involvement with Butina included working as a top staffer in Pat Buchanan’s 1992 presidential campaign, and serving as an entertainment agent for John Wayne Bobbitt after Bobbitt’s penis was infamously severed in 1993.

Erickson and Butina, 31, reportedly met several years ago while she was operating a gun-rights group in Russia and was cultivating connections with American gun-rights activists.

Butina’s activities brought her to South Dakota several times. She gave a lecture on the University of South Dakota campus in Vermillion in the spring of 2015. Her address at the university was entitled “The Right To Bear Arms In Russia … Where Neither Currently Exists.”

Butina’s appearance was sponsored by the university’s W.O. Farber Center, The Criminal Justice Club and The Political Science League.

In 2016, Erickson and Butina co-founded a South Dakota-based company named Bridges LLC, according to a February report in the Rapid City Journal. The incorporation papers say nothing about the company’s purpose.

Posing as a Russian gun activist, Butina had ties to a powerful Russian oligarch who’s a friend to President Vladimir Putin. Last year, she pleaded guilty to conspiracy to act as an unregistered foreign agent and was sentenced to 18 months in federal prison.

She took a plea deal and pleaded guilty Dec. 13, 2018 in Washington, D.C. She acknowledged conspiring with a Russian official and someone else described as “U.S. Person 1” to infiltrate and influence American political groups on behalf of Russia, without required registration as a foreign agent.

“U.S. Person 1” is widely believed to be Erickson.

Butina was released from prison last month and deported back to Russia, where she received a hero’s welcome and a job with the Russian government.