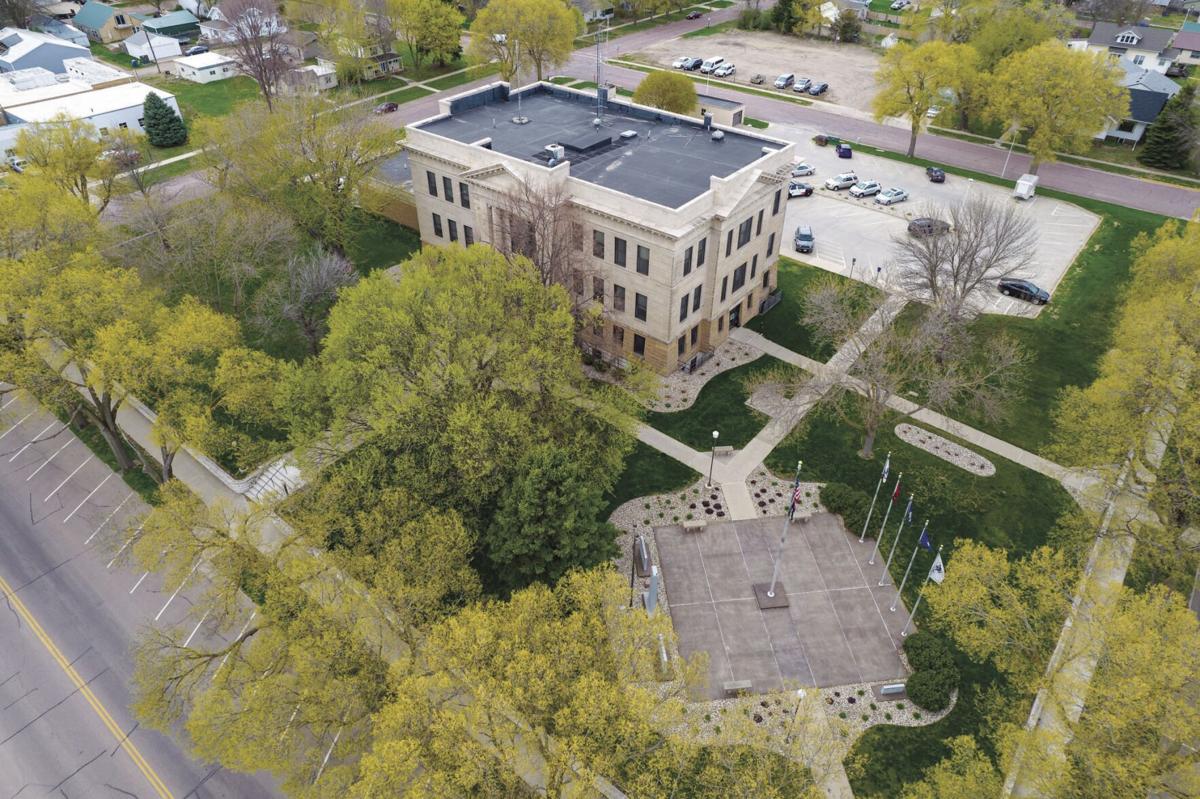 The Clay County Courthouse has stood at 211 West Main Street in Vermillion since its construction in 1913. It is of Classical Revival style and was listed on the National Register of Historic Places in 1983. It is a two-and-a-half-story building with stone veneer, on a raised basement. Pictured in the lower right of the courthouse’s grounds is the Clay County Veterans Memorial, which was dedicated on Veterans Day, Nov. 11, 2000. 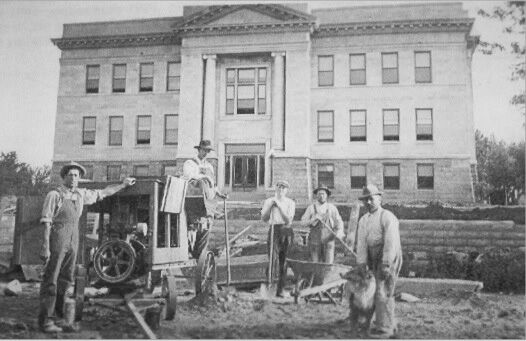 The Clay County Courthouse has stood at 211 West Main Street in Vermillion since its construction in 1913. It is of Classical Revival style and was listed on the National Register of Historic Places in 1983. It is a two-and-a-half-story building with stone veneer, on a raised basement. Pictured in the lower right of the courthouse’s grounds is the Clay County Veterans Memorial, which was dedicated on Veterans Day, Nov. 11, 2000.

The group working to save the Clay County Courthouse doesn’t have the funds to hire a professional architect.

“We haven’t priced this because we don’t have an architect to do that,” Art Rusch, a member of the “Save Our Historic Clay County (SD) Courthouse” committee said. “I just can’t believe that this wouldn’t be significantly cheaper than what they are talking about.”

Part of the $55 million plan offered and ultimately rejected by the county from JLG/BWBR Architects includes $2 million to $3 million to rent temporary offices while the courthouse is emptied completely for its renovation.

“I was involved in remodeling the courthouse in Yankton,” Rusch, a former circuit judge said. “We didn’t have anything like that. Actually, many of our court cases at that time were held here in Vermillion where we could. The ones that involved a lot of citizens in Yankton were held in the city council chambers in Yankton. We didn’t have to have a temporary courtroom built somewhere.”

He noted that when Union County constructed its new courthouse in Elk Point, it used an auditorium as a temporary courthouse, with dividers set up to provide temporary offices in that building.

“It certainly has problems -- the wiring and the plumbing and all of that -- but part of the $54 million plan includes knocking all of that down, while Klein McCarthy says you can reuse that. We’ve put together a plan that we think would be less expensive and fulfill the needs. Of course, they don’t include a new building, but they preserve our historic courthouse.”

The first step of the committee’s alternative plan calls for replacing the roof of the courthouse and doing needed tuck pointing to the building’s exterior. It is work, the committee notes, which would have to be done anyway.

The second major component of the committee’s proposal calls for the construction of a new jail and law enforcement center.

According to the plan, “It would be preferable to be done across the street from the present courthouse as the county already owns that land. Klein McCarthy estimated the additional land acquisition cost at $400,000. Other possibilities would be somewhere in that vicinity for convenience purposes and to be walkable for those who don’t have driver’s licenses.”

The committee also states that further study is needed to determine what size that new jail and law enforcement facility should be.

“Do we need a facility that will meet our maximum needs or just our average needs and plan on boarding out the excess prisoners when we have overflow days? What effect will the decriminalization of marijuana have? Do we want to be in the business of running a jail for profit?” the committee asks in its proposal, adding “Yankton is already doing that. Sioux Falls is going to be doing that due to their large new jail. Can we compete with them? Where will the proposed prisoners come from?”

“According to Klein McCarthy Architects, the Public Safety Center is in relatively good condition for its age and type of building,” the committee states in its written recommendations, “and has many years of life remaining, but is in need of repairs and upgrades.

Step four of the committee’s alternative proposal: Moving some existing courthouse offices into the “courthouse annex.”

The fifth step in the committee’s proposal calls for moving remaining county offices into the “courthouse annex” temporarily during the courthouse’s renovation. This would save on moving expenses and the $2 million to $3 million cost estimated by JLG/BWBR Architects to rent temporary courthouse space.

The final step of the plan is the restoration of the courthouse and constructing a new elevator/restroom addition to its north side. “With the space that was vacated by the offices that moved into the ‘courthouse annex,’ there would be room to expand the remaining offices in the courthouse,” the committee’s recommendations state.

“This is an accumulation of the committee visiting and our oversight to say ‘what would we do?’” Pat Gross, a member of the Save Our Historic Clay County (SD) Courthouse committee said. “I think we’re sensitive to the idea of the public saying, ‘what are we really going to do?’ I think Art put it together and did a lot of cross referencing to the Klein McCarthy reports, but it also represents over a dozen of us that have had a chance to think about this and talk about it.”

“We all acknowledge that they need to do something about the jail,” Rusch said. “I’m not sure how big this jail needs to be. Yankton boards prisoners now. Sioux Falls, we gather because their new jail was built so big, that they’re going to be in the business of boarding prisoners there.”

He stated that Clay County doesn’t need to build a jail to house the maximum number of prisoners it believes it may have in the future.

“If you build a jail for 20 and you have 22, you board out those two,” Rusch said. “We move prisoners between Yankton and Elk Point on a daily basis.”

Should the $41 million bond issue fail at the polls in June, the Save The Courthouse committee hopes it can join the Clay County Courthouse, Jail, & Law Enforcement Planning Committee and the Clay County Commission in planning the county’s next steps.

“We’ve talked with Betty (Clay County Commissioner Betty Smith) about that, and her goal would be to see them come up with what she calls a clean bond issue that just addresses the problems with the jail and major renovation things,” Rusch said. “We’d be all supportive of something like that.”

“Which would include restoration and more practical utilization of space and bringing the courthouse up to code,” Gross said.

Rusch said the county likely may have to wait for a while before attempting a second “clean bond issue” after the expected failure of the one scheduled in June because the Vermillion School District likely will be holding a bond issue in November to finance the construction of a new elementary school.

Don’t Make Us Vote No

“As far as our group goes, the number one thing has always been to save our historic courthouse,” said Dan Christopherson, a “Save The Courthouse” committee member. “That is our number one thing and I told the county commissioners that during at least three of their public meetings. We want to save the historic courthouse for a long time. Please, please, don’t make us vote no on the bond issue by not having that (the courthouse) a part of it.

“It ended up that what they ended up asking for includes abandoning the historic courthouse,” he said. “In order to keep our number one goal in mind, we have no choice but to vote no. We agree with the law enforcement/jail part of it. We agree that the current courthouse building needs a lot of restoration. That can be done by moving into temporary space, not rebuilding everything at a temporary location.”

Christopherson said he believes the committee has come up with a reasonable proposal to help make the saving of the courthouse a reality.

“We don’t have the architects engaged, so we can’t quote numbers and things like they (the county) can,” he said, “but we think we have a reasonable alternative and would be happy to help move forward with that because it saves our historic courthouse and that’s our number one goal.”

“I’d like to think that this is (the alternative proposal), as opposed to saying we don’t want the bond issue … I look at this as a beginning discussion point and a bit of an answer to people who say ‘well, you just can’t be opposed to it. What are we supposed to be doing here?’” said Gross. “These are topics that really deal with some of the critical issues that need to be solved -- first of all, replacing the roof and we understand there’s money for that. There are a lot of people that really want that roof fixed.”

He believes that voting on a multi-million dollar bond issue would perhaps have more meaning to citizens if they would have had more choices.

Christopherson shared an observation that Rusch has made: what the county is doing is similar to an individual giving a realtor $400,000 and saying “Pick me out something, I don’t care what it is, I don’t care what it looks like, but here’s the money.’ That’s kind of what they’re asking us to do -- to give them $41 million and they’ll decide where it is and what it looks like with no further public input.”

“I’ve never heard of a bond issue where they didn’t disclose where it was going to be built,” Rusch said. “Maybe there have been some that I’m not familiar with.”

He suspects the county commission may be worried that announcing the location before the bond vote may outrage voters. A similar situation occurred, Rusch said, when property was purchased in Tea to build a new jail and law enforcement center in that community and voters decided to not approve funding for the facility.