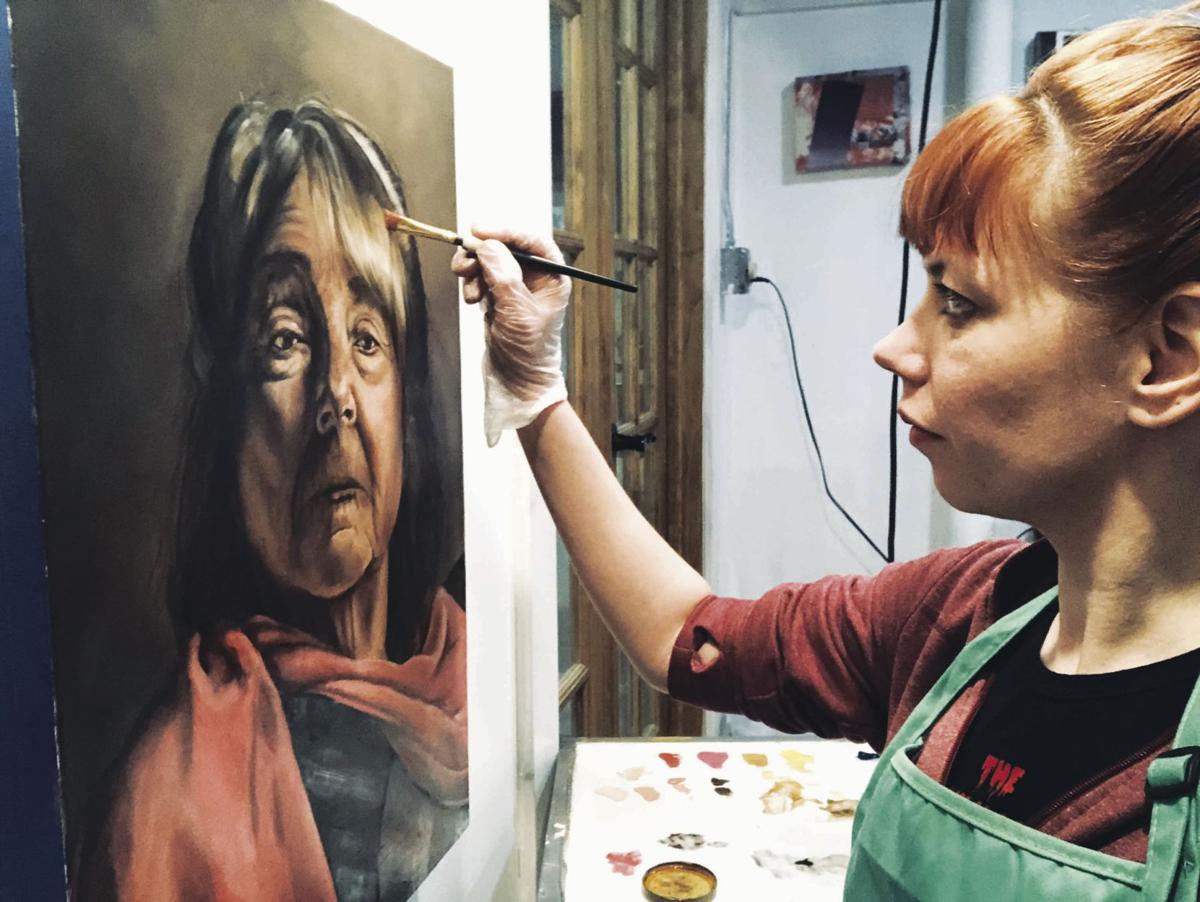 Klaire Lockheart is pictured at work in her studio in Vermillion.

Pictured is the stripe created by Vermillion artist Klaire Lockheart for the national Her Flag project. The stripe, which features South Dakotan dinosaurs dressed as suffragists, represents women’s ancient struggle for equality. This piece of art was sewn on to the Her Flag art project Thursday night, Jan. 30, at the Cultural Heritage Center in Pierre. 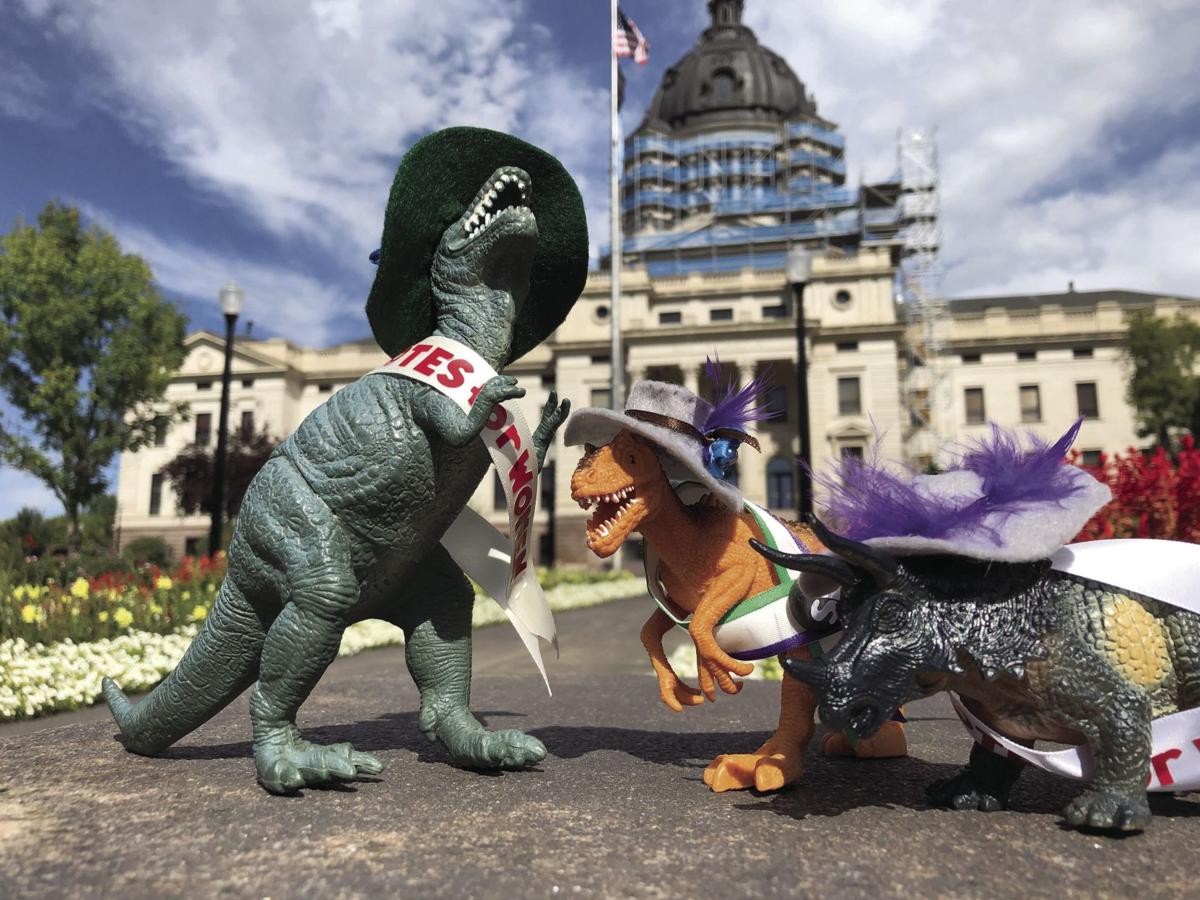 Pictured by the South Dakota Capitol is “Suffragist Sue,” a character that Klaire Lockheart created in a scene she shot in Pierre.

Klaire Lockheart is pictured at work in her studio in Vermillion.

Pictured is the stripe created by Vermillion artist Klaire Lockheart for the national Her Flag project. The stripe, which features South Dakotan dinosaurs dressed as suffragists, represents women’s ancient struggle for equality. This piece of art was sewn on to the Her Flag art project Thursday night, Jan. 30, at the Cultural Heritage Center in Pierre.

Pictured by the South Dakota Capitol is “Suffragist Sue,” a character that Klaire Lockheart created in a scene she shot in Pierre.

On the panel she created for the national Her Flag project, Vermillion artist Klaire Lockheart uses humor and iconic imagery to depict South Dakota’s role in the women’s suffrage movement. Lockheart’s artwork, which represents South Dakota on the commemorative flag, was sewn onto the project last night (Jan. 30) during a special ceremony at the Cultural Heritage Center in Pierre.

Her Flag is a collaborative art flag being created to commemorate the 100th anniversary of the 19th Amendment, which gave most women the right to vote in 1920. Her Flag creator Marilyn Artus, an Oklahoma artist, is on a 14-month journey to visit the capital cities of the 36 states that ratified the amendment and in so doing, to create the commemorative flag.

In each state, Artus sews on that state’s contribution during a special ceremony. She started the Her Flag project on June 10, 2019, the day that Wisconsin got the women’s suffrage movement started. She will conclude the project on Aug. 18, 2020, the exact date that Tennessee ratified the 19th Amendment into law. South Dakota was the 21st state to ratify the amendment on Dec. 4, 1919.

When completed, the commemorative art flag will measure 18 feet tall by 26 feet wide. South Dakota’s strip on the flag is 26 feet long.

“The stripe I created features South Dakotan dinosaurs dressed as suffragists,” said Lockheart, who was chosen to create South Dakota’s Her Flag contribution after answering a national art call for the project. “I made tiny little hats and banners for dinosaur toys, photographed the compositions, and then transformed the images so I could silkscreen them onto fabric.”

Lockheart, who holds an MFA in painting from the University of South Dakota, used the process of silk-screening to create the South Dakota Her Flag contribution because of the association between fiber arts and women’s work. She thought silk-screening was also a great way to represent the long, hard process women in South Dakota went through to acquire voting rights, she said.

“Women have been fighting for equality since the dawn of time, which is why I use dinosaurs as a metaphor for this ancient struggle,” said Lockheart. “Like other American women, South Dakotan suffragists fought a long and difficult battle to earn the right to vote. While women’s rights are a serious issue, I enjoy incorporating humor to make serious subjects approachable.

“The plastic dinosaur toys are silly at first glance, but I transformed them into suffragists to represent the South Dakota Universal Franchise League and the South Dakota Equal Suffrage Association. I made Suffragist Sue to honor the strength and tenacity of women from South Dakota including Mary “Mamie” Shields Pyle, Jane E. Waldron, and Etta Estey Boyce,” she said. “In addition to the Tyrannosaurus Rex, I utilized other South Dakotan dinosaurs to celebrate the state’s unique contribution to the 19th Amendment.”

Lockheart is humbled to be selected as the artist representing South Dakota in this project, she said.

“I am honored to represent South Dakota as part of the Her Flag collaboration!” she said. “Marilyn Artus is unifying fantastic American artists to celebrate the 100th anniversary of the 19th Amendment and I am lucky to be included."

Lockheart currently has a solo exhibition of paintings on display at the Sioux City Art Center, which closes Feb. 2. Two pieces of her artwork, including imagery from Lockheart’s Her Flag composition, will soon be featured at the upcoming Arts Night at the Washington Pavilion.

Lockheart, who moved back to Vermillion a year ago after some time away, says she is excited to be part of the arts community in Vermillion again.

“In addition to making and displaying my art, I am interested in positively impacting the arts community,” said Lockheart. “I am in the process of organizing two art exhibitions that will be on display in Vermillion this spring, and I am looking forward to seeing who enters artwork. Subversive Celebration is an international altered card exhibition. Packard Group National Exhibition 2020 is a show that anyone in the country can make artwork that is 8x10 inches or smaller for inclusion. I hope to get more artists from South Dakota excited to participate because we have fantastic artists in the area! I have more details posted on my website: https://www.klairelockheart.com/art-calls.html.”

For more information about the Her Flag project, visit www.herflag.com.