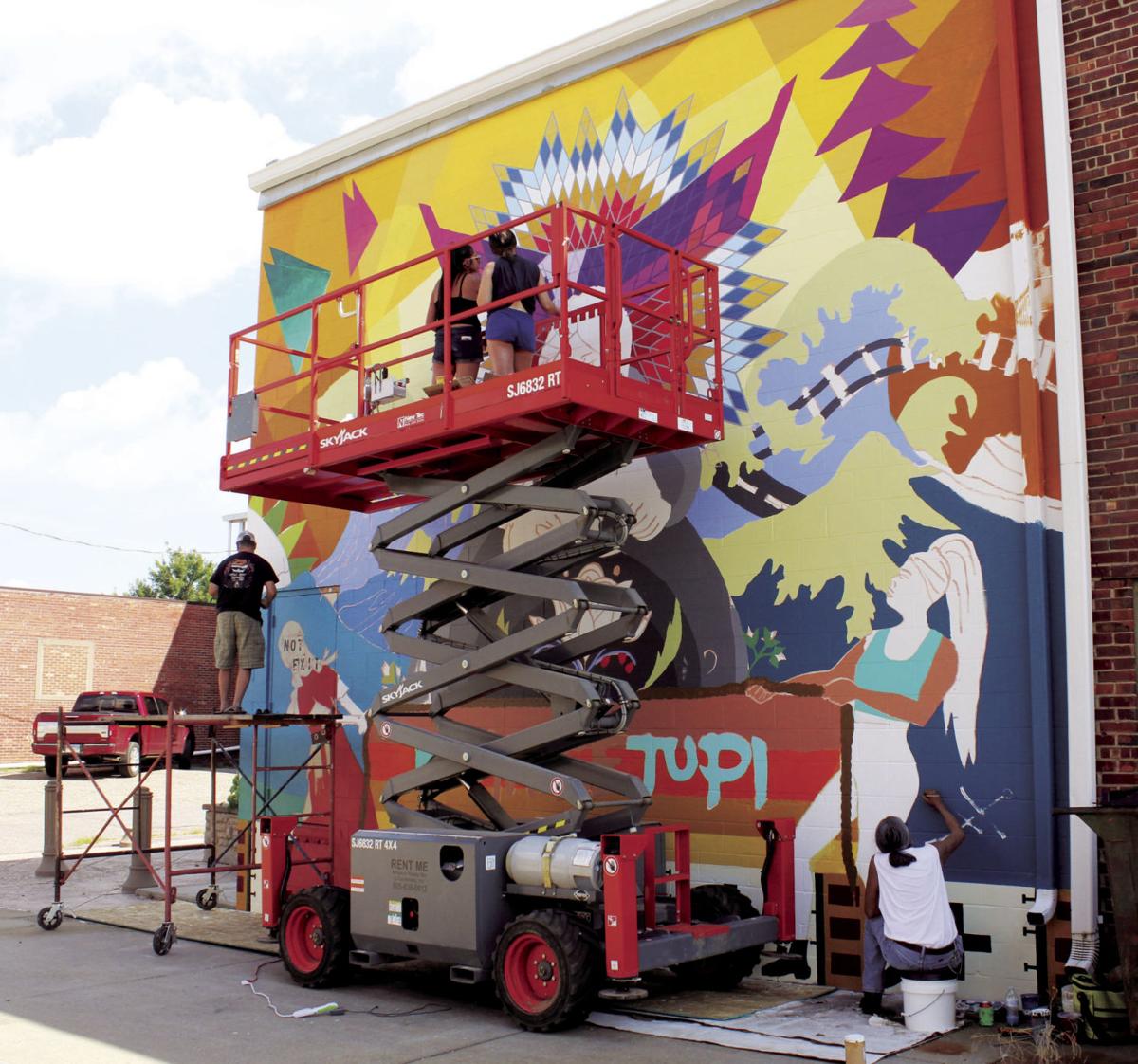 This is how the mural appeared earlier this month as artists Scott Martinson, Jenae Porter, Reyna Hernandez and Sal Hernandez make progress on the large piece of art. 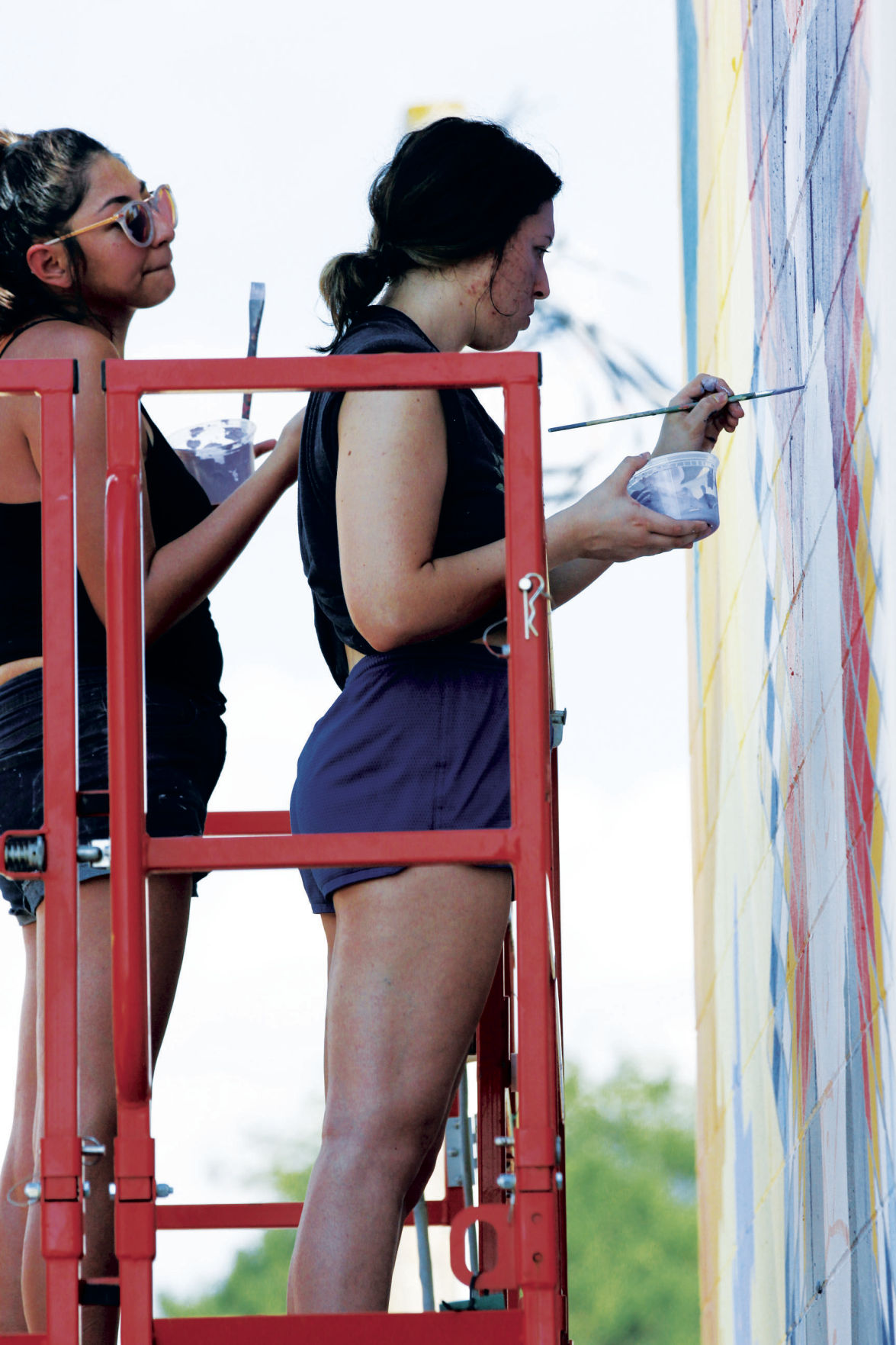 Lead muralist Reyna Hernandez of Yankton adds fine touches to the mural being painted on the north exterior wall of the Coyote Twin Theatre in this photo taken Aug. 1. With her is Jenae Porter, a USD student who is also one of the lead painters of this piece of art.

This is how the mural appeared earlier this month as artists Scott Martinson, Jenae Porter, Reyna Hernandez and Sal Hernandez make progress on the large piece of art.

Lead muralist Reyna Hernandez of Yankton adds fine touches to the mural being painted on the north exterior wall of the Coyote Twin Theatre in this photo taken Aug. 1. With her is Jenae Porter, a USD student who is also one of the lead painters of this piece of art.

A new mural is currently in progress on the north side of the Coyote Twin Theatre.

“This project began with a grant I received from the Change Network,” Hansen said. “Money from the grant is being used to buy materials and to support the three lead artists in creating a new community-based mural for Vermillion.”

According to Hansen, the Vermillion community has not only been supportive but integral to the design process.

“When we held our first meeting with the community, we began by asking them what they felt was missing from our visual landscape,” Hansen said. “This question inspired lengthy conversations surrounding topics ranging from motherhood, lack of female representation, untold stories of marginalized people, identity and unknown histories of this place.”

The mural is expected to be completed by the end of August, according to Hansen.

“As of right now, we don’t have a title,” Hernandez stated. “But we included the Lakota word eúŋkičetupi, meaning ‘we are restored’ or ‘we come back to life’. I think that the idea of being restored is one of the main overarching themes in this design.”

Themes that the Vermillion community itself helped brainstorm through discussion and even creating a collaborative poem.

“The floods that impacted the Midwest were a huge topic of conversation at this meeting,” Hernandez said. “We talked about the dual nature of water as both a source of life, but also one of devastation like we were seeing all around us. Powerlessness against nature, but also optimism that things would be restored.”

According to Hernandez, the artists were determined to create a design unique and challenging.

“We wanted to make sure that we recognized and placed emphasis on the community’s contribution to the design process while also staying true to who we are as contemporary Indigenous artists,” Hernandez said.

The final design, Hernandez said, aims to include exactly what the community decided is missing from the visual landscape.

“We were interested in creating space for women, specifically indigenous women, who are so often left out of the narrative,” Hernandez said. “So our design is talking about the importance of women in all cultures while telling the Sioux creation story, which is fairly unknown.”

According to Hernandez the Sioux creation story begins with a worldwide flood and a lone survivor, a pregnant woman.

“In the story an eagle carries her to the top of a peak where she gives birth to twins, thus beginning the Sioux nation,” Hernandez said. “The major themes we took from the community meetings and tried to include in the mural are restoration, rebirth, femininity, womanhood, identity, water, landscape and the importance of representation.”

According to Hansen, the community response to the mural has been extremely positive.

“The design team and the Vermillion Cultural Association which approved the final design have been very supportive,” Hansen said. “We also had many people join us in the community paint days. The wall was filled with people throughout the entire time we were painting.”

This isn’t the first time Hansen has participated in this type of project.

“In 2016, I helped facilitate a community-based mural that was led by two artists in the community and myself,” Hansen said. “Since then, it has been a dream to create more murals with the community, being led by different artists.”

According to Hansen, the fact that this wasn’t a new process gave room for more thoughtful discussion.

“I think the muralists did a fantastic job creating an image that is uniquely guided by the very seriously, thoughtful and playful conversations that were had during our design workshops,” Hansen said.

According to Hansen, the collaborative effort of the artists have been inspiring as the team has navigated challenges such as weather, health problems and full-time jobs.

Hansen also stated that the community has been behind the project all the way, providing all the assistance they needed in both volunteer work and resources.

Hansen said she hopes community-based murals will not end with the completion of this one which is actually only half of the design created by Hernandez, Skye and Mani.

“At this point though, we are looking forward to completing this half of the mural,” Hansen said. “Moving forward, we would like to raise funds to paint the wall that wraps around the building to finish the other half of the design. The artists have designed the other half and we are hoping to find more funding to paint it next spring.”

Regular updates on the project can be obtained by emailing Hansen at amber.hansen@usd.edu or following the facebook group @vermillioncommunitymural.

Below are the roles and titles of the artist’s participating:

Lead Muralist: Reyna Hernandez was born in Yankton, South Dakota and is an enrolled member of the Yankton Sioux Tribe. She received her B.A in English and B.F.A in Studio Arts at the University of South Dakota in 2016. Throughout her research, Reyna investigates the concept of identity hybridity in relation to her Indigenous bloodlines and her westernized upbringing.

Assistant Muralist: Inkpa Mani is Tarahumara and Mexica. He grew up in the lands now known as Chihuahua, Mexico and Minnesota. His work uses social engagement to share the many injustices faced by Native Americans. Inkpa is a multi-discipline artist using stone, paint, and paper, digital media, and public speaking to explore Indigenous issues.

Assistant Muralist: Elizabeth Skye’s work has been primarily about contemporaneous indigeneity and what that looks like within the future of ceramics. She is also a data visualist for the Sovereign Bodies Institute (SBI) where she is continuing work on her project Unbottling Injustice: Missing and Murdered Indigenous Women, Girls, & Two- Spirit Peoples. She is currently a fourth-year senior and is anticipating graduation inDecember 2019.

Jenae Porter, a BFA Painting Senior has joined the mural painting crew as one of the lead painters. Jenae is a senior at USD and will graduate in May 2020 with a BFA in Painting and a minor in Art History. She is interested in community based art and has worked under Amber Hansen in multiple mural projects. Her studio work draws inspiration from personal experience and the importance of mental health and emotional wellbeing.

Marisa Cummings, the director of Native Student Services at USD, is a faculty advisor on the project.

The new mural will be located on the North Side of the Coyote Twin Theater. This project is supported by the Bush Foundation through the Change Network, Vermillion Cultural Association, the Vermillion Area Community Fund & the University of South Dakota’s Fine Art Department and Native American Cultural Center.

Several individuals and business have donated their time and resources to help prepare the wall and execute the painting. They include Vermillion’s Ace Hardware, Midwest Ready Mix & Equipment, Inc., and Coyote Twin Theater.