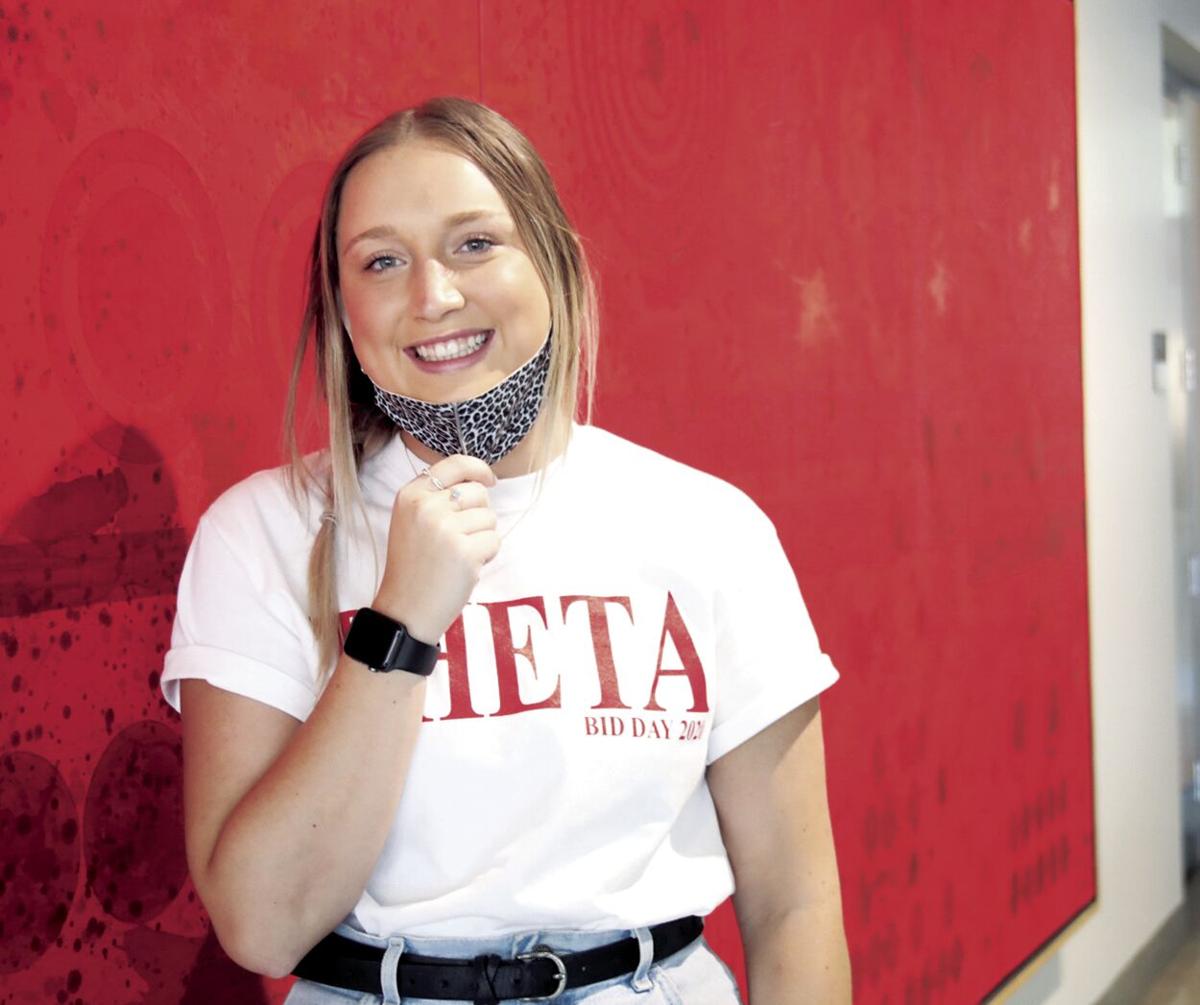 Alyssa Bossman, a senior the senior studying health services administration at the University of South Dakota’s Beacom School of Business, pauses for a moment in the school’s lobby before heading to class following her interview with the Plain Talk on Sept. 1. She settled into her off-campus housing on Sept. 18, a week after undergoing brain surgery so she could be present for the opening day of classes on Sept. 19. 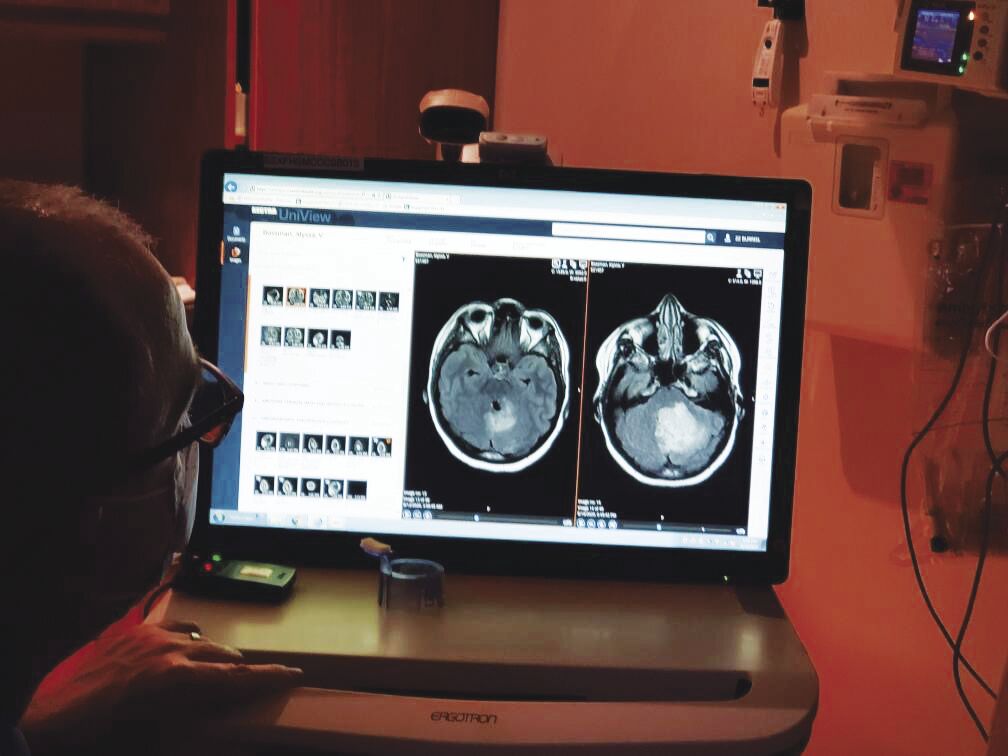 An MRI scan of Alyssa Bossman’s skull last month revealed a mass growing near her brain. Surgeons remove it and tests determined that the mass was benign. The surgery took place on Aug. 11. Bossman returned to Vermillion on Aug. 18 so she could be present for the first day of classes at the University of South Dakota on Aug. 19.

Alyssa Bossman, a senior the senior studying health services administration at the University of South Dakota’s Beacom School of Business, pauses for a moment in the school’s lobby before heading to class following her interview with the Plain Talk on Sept. 1. She settled into her off-campus housing on Sept. 18, a week after undergoing brain surgery so she could be present for the opening day of classes on Sept. 19.

An MRI scan of Alyssa Bossman’s skull last month revealed a mass growing near her brain. Surgeons remove it and tests determined that the mass was benign. The surgery took place on Aug. 11. Bossman returned to Vermillion on Aug. 18 so she could be present for the first day of classes at the University of South Dakota on Aug. 19.

To say that Alyssa Bossman had a unique, remarkable summer is a bit of an understatement.

The first remarkable thing that happened is she had brain surgery on Aug. 11. The operation has put an end to painful headaches and other problems that had been plaguing her for quite some time.

There’s more, however. A second remarkable thing happened that can’t be chalked up alone to the miracles of modern medicine.

This second miraculous happening occurred because, through sheer grit and will power, Alyssa was determined to not let anything get in her way.

On Aug. 18, just a week after undergoing brain surgery, Alyssa moved back into her off-campus housing in Vermillion from her parents’ home in Humboldt.

When the first day of classes at the University of South Dakota began Aug. 19, just eight days after going “under the knife,” the senior studying health services administration at the university’s Beacom School of Business was strolling on the Vermillion campus, resuming her studies with thousands of her cohorts at exactly the moment the new school year began.

Alyssa and those close to her first got the notion that things just weren’t quite right health-wise when she was diagnosed with vertigo in September 2019.

“They thought it was kind of weird because I’m so young and people who usually get that are older,” she said in a Sept. 1 interview at the business school. “That turned out to be the tip of the iceberg. In January, I started to get really bad headaches but they didn’t have the dizziness that goes along with vertigo. They weren’t very frequent, so I just let them pass.”

The headaches began when Alyssa was studying abroad in the Virgin Islands.

“The headaches weren’t frequent enough for me to be worried about them,” she said.

Alyssa and other students had to end their studies there early and return home last March because of the COVID-19 pandemic.

“The healthcare system there is actually really scary. It’s not the greatest so I was terrified that I might get stuck there,” she said.

After returning home, Alyssa was doing well for a time, but eventually the headaches returned, prompting her to visit her doctor last April.

At first, it was thought that her neck was out of line and she needed to visit a chiropractor. Those visits only made her vertigo flare up.

Later that spring, she and her sister traveled to Arizona to spend some vacation time together.

“I think it might have been the plane ride that did it,” Alyssa said. “Every day I would wake up with a headache and it wouldn’t go away until I threw up.” That experience would repeat itself several times a day.

Upon her return, she visited a clinic in Vermillion and a doctor initially thought Alyssa was suffering from tension headaches. She was given ibuprofen and a high dose muscle relaxer, but her condition only worsened.

“I was on the couch a lot and I tried to walk around the kitchen and I just didn’t feel right,” she said.

That prompted a Monday morning, Aug. 10, doctor visit. A CAT scan was ordered at 4 p.m. that afternoon and the results found “something concerning,” according to her diagnosis that likely would require surgery.

Before knowing for certain what would happen next, doctors ordered Alyssa to undergo an MRI and that test revealed that she had a mass on her cerebellum, on a portion of the back of her brain.

“They said they were going to get it out the next morning, so I had surgery the next morning (Aug. 11) at 10:30 a.m. and I stayed in the ICU for about four days because I had a tube in my head that was draining fluid,” she said. “I got moved to a normal room on Friday and got out on Saturday (Aug. 15).

“We still had to wait for my pathology results, so it was kind of a terrifying weekend of just waiting and waiting, and then they finally called on Monday and I missed it,” Alyssa said, laughing, “but they called back and we went to my doctor’s office. He said it was all good, they got everything out, it (the mass) was benign and I should be good. It wasn’t cancer and that was the most important, the biggest thing for me.”

She delivered some things to her off-campus housing on Monday, Aug. 17, went back home and “officially came back on Tuesday night, Aug. 18,” Alyssa said, “and then I went to class on the 19th.

“People think I’m crazy, but I just felt it would be easier to come back right away rather than two weeks later or three weeks later and, first of all, be super behind, and second of all, have everyone else finally in the swing of hybrid classes and everything and I would be starting from scratch,” she said. “I feel like that would be so much more difficult than just starting classes right away.”

She no longer has to take three medications that she was initially prescribed when released from the hospital last month.

“I only have to take one pill now as opposed to four,” Alyssa said.

Doctors said the benign mass they removed from her brain was the size of a small orange.

She has had a few struggles to deal with in the first weeks following her surgery.

“I wasn’t allowed to drive until my follow-up appointment on Aug. 27, and washing my hair takes about 20 more minutes,” Alyssa said, again with a laugh that lets everyone know that these smaller problems are difficult to take seriously after what she’s been through.

She lifts up her long hair to show the scar from the surgery that begins roughly at the top of her neck and extends to the middle of the back of her head.

“It’s still healing and very sore,” Alyssa said. “I sleep on an ice pack or a heating pad every night. My roommate has to wash my head two to three times a day, but luckily she’s a nursing major so she doesn’t mind it too much.”

Doctors told her to get plenty of rest and she’s discovered that not taking naps each day really isn’t an option -- at least for the time being.

“People don’t understand -- I HAVE to go take a nap,” Alyssa said. “That was another big thing … my friends understanding that I can’t just do everything, yet, so there’s definitely been some struggles.”

She goes to all of her classes each day and on Sept. 1, she worked her first shift on a job in the university’s admissions office.

“We’ll see how well that goes, because it kind of took it out of me to have class and then work and then have class again,” Alyssa said. “It was a lot all at once that I’ve got to get used to doing.”

Every day, she noted, is a bit better than the day before. Her scar is healing. The debilitating headaches are gone; she still gets a headache now and then just from the general soreness following the surgery.

“They said muscles got cut and that will take about six weeks (to fully heal) so that’s something that I’ll have to deal with,” Alyssa said.

Her ability to walk is also returning to her normal. The benign mass was beginning to affect that at about the time she had her surgery.

“I had to hold onto rails and stuff and it was kind of hard to get back into it,” Alyssa said. “I always felt like I had to be grabbing something, so it’s nice that I finally feel like I can walk freely.”

She knows she easily could have spent time at her parents’ home recuperating, but her mind was set on USD’s Aug. 19 start of classes.

“That was my biggest goal. It pushed me to get out of the hospital. I’m in a sorority and I missed my senior year recruitment and that was really hard and really sad for me to accept, so I’m not missing the last ‘firsts’ that I have,” Alyssa said. “I just really wanted to experience the first day … and I got to.

“I don’t feel like I had to sit around all day to heal,” she said. “Honestly, a big thing that I needed to be doing was walking around anyways … so there’s not really a point to me sitting around at home. I have a bed here and both of my roommates are nursing majors, so I’m in good hands. I definitely don’t regret it.”

Alyssa will graduate in May.

“I haven’t decided yet if I want to go straight into the workforce,” she said. “I might stay and get my master’s. It just depends if I get offered a job or if I apply for jobs.”

Alyssa had mentioned earlier during her interview with the Plain Talk that she’d like to someday be the administrator of a long-term care facility, such as a nursing home.

“It was nice to get literally hands-on experience,” she said of her hospital stay. “Not that I wasn’t compassionate before, but it gives you a new sense of knowing exactly how a patient feels, especially in a nursing home when someone is stuck in bed or can’t necessarily walk. That’s exactly how I felt. I had to have someone with me and I had to literally do what residents in a nursing home have to do.

“It is very nice to be able to remember that when I’m dealing with them and make sure to stay compassionate and have empathy,” Alyssa said. “I definitely think it’s going to help me in my future.”