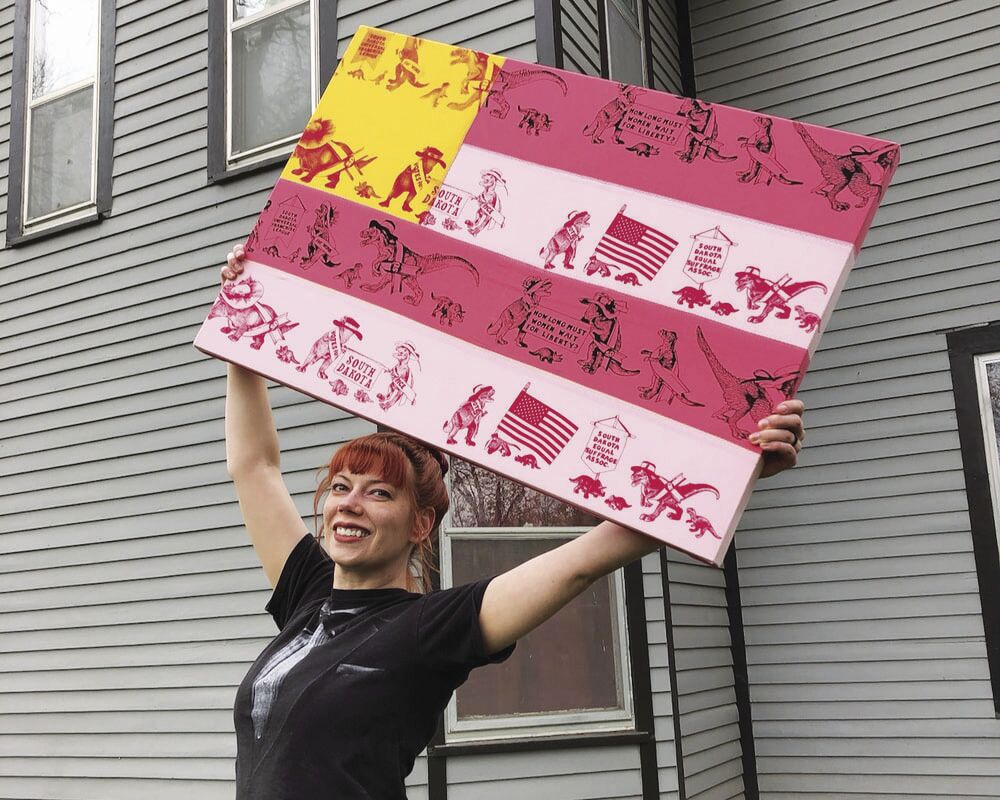 Klaire Lockheart is pictured holding her ink on fabric on canvas piece of art entitled "Suffragist Sue." Her creation is now a part of the state’s art collection. This photo appears on Lockheart's web page, where she states, "I invented Suffragist Sue to honor the strength and tenacity of women from South Dakota, and then I printed on fabric to reference traditional women’s fiber work." 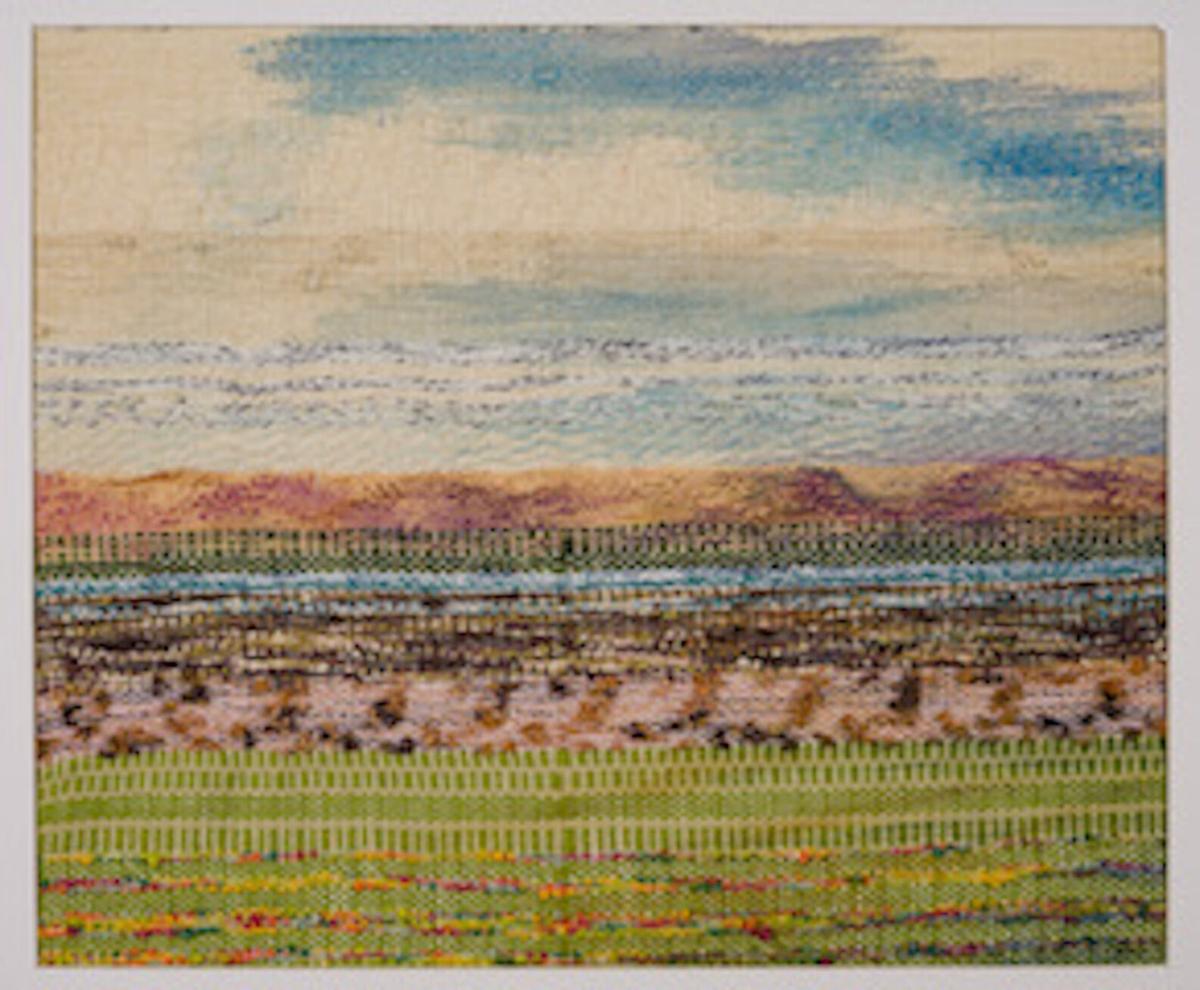 Klaire Lockheart is pictured holding her ink on fabric on canvas piece of art entitled "Suffragist Sue." Her creation is now a part of the state’s art collection. This photo appears on Lockheart's web page, where she states, "I invented Suffragist Sue to honor the strength and tenacity of women from South Dakota, and then I printed on fabric to reference traditional women’s fiber work."

Two Vermillion artists have had pieces purchased by the state of South Dakota for the state’s art collection.

Phyllis Packard and her daughter-in-law Klaire Lockheart’s pieces were among 13 new artworks the state purchased from a pool of 54 applicants from across the state according to a press release from the South Dakota Arts Council (SDAC).

“We were thrilled that so many talented South Dakota artists answered the call to provide art, giving us the opportunity to support their small businesses,” said SDAC Executive Director Patrick Baker. “The variety of artwork is impressive, and I hope people will visit to see the collection in person and fully appreciate the depth of talent represented.”

Packard and Lockheart both submitted art last year after the state put out a call or invitation for artists to submit work. If purchased, the art would be put on display in various state buildings for employees and visitors to enjoy.

According to Packard and Lockheart, the state then changed its mind about purchasing any artwork due to budget restrictions.

Made in 2018-19, the 24X30” piece consists of woven threads using various techniques practiced by Packard for 55 years.

“On a lot of what I call watercolor weavings the landscape is what you call woven with a lot of the color and definitely the texture,” Packard said. “When I take it off the loom I then stain it with watercolor to push it a little bit further to what I want it to look like.”

According to Packard it takes many layers of stain to get the desired addition of color.

“I don’t use textile dyes because textile dyes don’t provide subtlety,” Packard said. “What I’m going for is a very illusive, very suggestive color and the watercolor has really worked for that. I took three or five years to experiment with watercolor, putting pieces in the sun making sure they weren’t going to disappear within a day. I still have pieces that I've done that are the watercolor weaving that are 20-25 years old and still perfectly fine.”

Packard said her pieces are inspired by the South Dakota beauty she sees daily around her.

“My loom has a bank of windows by it that looks South and West so I'm constantly aware of what the weather and what the prairie is looking like,” Packard said. “I see the Missouri River Valley hourly daily and so often it’s influencing what I'm weaving and my travels around South Dakota. I think I've stated on this piece it could be anywhere in South Dakota, somewhere looking at the hills from afar or by Pierre or Mitchell or Madison. There are areas of the prairie that no matter where you are on the prairie you could see that piece is where you live or where you’re at.”

It seemed to be relatable to the SDAC.

“I was told that everybody on the panel just jumped at buying it,” Packard said. “It is South Dakota and wherever you want to believe that it is, I'll agree with you.”

Packard’s weavings are also inspired by where she grew up in Massachusetts.

“The ocean is very strong in my memory and my upbringing,” Packard said. “I have always seen the prairie in a similar light as the ocean and so when I'm weaving my mind is constantly playing back and forth. Am I weaving prairie or am I weaving ocean and at times it can be either depending on how you look at it and what you see.”

According to Packard the weaving took about three months to make.

“Curiously I had sat down a couple of months ago with a spreadsheet and really started figuring out if I made $10 an hour in creating one of these pieces with what I put into them for time and materials and equipment etc, they should really be about $5800,” Packard said. “So I thought well, $4,500 makes me happy. I’m not being a waitress.”

Packard said she figured if she gave herself $15 per hour the piece would cost over $6,000.

“Art is rarely paid what the pieces are worth in actuality,” Packard said. “It does feel good that I have been selling pieces close to what they’re worth. I am really delighted on this.”

Packard said her priorities go beyond the price tag.

“The price was wonderful to get. The fact that it was recognized and chosen is so much more important as an artist. It will be seen for a long time by a lot of people.”

Lockheart submitted and sold a piece of fiber art entitled “Suffragist Sue” which sold for $1,000.

The 24X36” piece is ink on fabric on canvas, a small flag with printed dinosaurs in suffragette garb.

It is based on the artwork that she made to represent the state of South Dakota for the Her Flag project, a collaborative work of art with over 30 women from across the country commemorating the 100th anniversary of the 19th amendment.

“For my contribution I made what’s called Suffragist Sue which is a T-Rex and she’s protesting for the right to vote,” Lockheart said. “I had printed yards and yards of these dinosaurs to have for my contribution because it was 6 inches tall and I think it was 26 feet wide. I kept a lot of this fabric so I made a smaller version of the flag but it’s only with the South Dakota art on it. It’s reminiscent of a flag but it’s not 100% accurate and it’s covered in dinosaurs that like that women can vote.”

Lockheart’s artist statement for the piece says that she uses dinosaurs as a metaphor for the ancient struggle of women fighting for equality.

“South Dakotan suffragists fought a long and difficult battle to earn the right to vote,” Lockheart said. “While women’s rights are a serious issue, I incorporate humor to make serious subjects approachable. The dinosaurs are silly at first glance, but I transformed them into suffragists to represent historic suffrage organizations. I invented Suffragist Sue to honor the strength and tenacity of women from South Dakota, and then I printed on fabric to reference traditional women’s fiber work.”

Lockheart stated that she feels honored to have her work in the state collection, especially a piece which addresses such a relevant issue.

“The 19th amendment was accepted 100 years ago but still it feels like it was a long time ago but it’s also not a long time ago,” Lockheart said. “We still have issues with voting rights today and it’s important to be able to participate in our government and what’s going on in our state.”

According to the SDAC press release, the state began building its permanent state art collection in 2008.

The work of the chosen South Dakota artists is on display in publicly accessible areas of state government buildings in the capital city.

The pieces purchased this year should be installed this month.

A third Vermillion artist, Ari Albright, also had art purchased by the state of South Dakota for the state’s art collection. Her works that are now part of the collection are entitled: “Country Nights 2, Fancy Camping.” They are acrylic on canvas.

According to information from the South Dakota Arts Council’s web page, Albright is a visual artist and traveler who has spent three decades generating narrative paintings that explore themes of identity and belonging. Born in Cheyenne, Wyoming, Ariadne (air-ee-odd-knee) received her B.F.A. in Printmaking from the University of Washington and M.F.A. in Painting from the University of South Dakota.

Employed as an artist and art educator, Ariadne is the Arts Program Coordinator at Sanford Vermillion Medical Center (SVMC) and an active roster artist with the South Dakota Arts Council’s Artists in the Schools and Communities Program (SDAC).

She initiated the arts in health curriculum within the College of Fine Arts at USD and serves as board member of the National Organization of Arts in Health (NOAH).

“My primary purpose as an art educator is to facilitate connections between students and our visual culture. Because each person has varying abilities, interest levels and learning styles, our art exercises must be both engaging and relevant,” she said. “Mural painting is a popular way to coordinate the elements of art, design and visual themes from art history with students of all ages. The classroom provides an opportunity to create an atmosphere of trust, creativity, scholarship and enthusiasm for the visual arts.”

Based on the quality of life outcomes with clients of arts in health programming, Albright presents on artists working in healthcare including the MAYO Clinic Arts in Healthcare Symposium, Pioneer Network Conference and South Dakota Association of Healthcare Organizations Conference.

Her first book, “An Artist in Healthcare” is still being “workshopped” by editors. A recent SDAC Artist Fellowship Grant facilitated her painting exhibition and visiting artist activities in Ankara, Turkey.

Other purchases by the state of South Dakota include:

For a full list of the Art for State Buildings collection and locations visit artscouncil.sd.us.