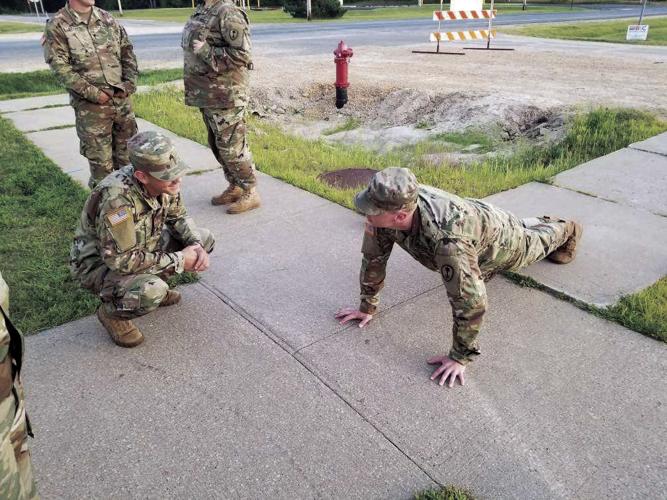 South Dakota pole vaulter Kaleb Ellis joined the U.S. Army shortly after his 17th birthday. He represents the latest chapter of his family’s long and proud legacy of military service to the country. 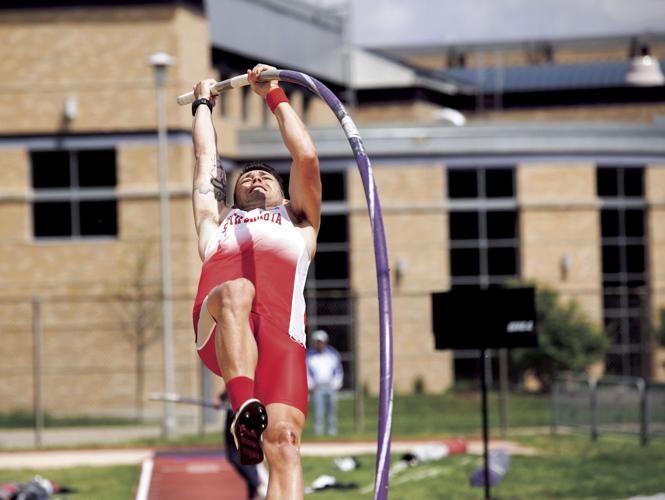 After enrolling at USD in 2016, Kaleb Ellis, a sergeant in the U.S. Army, was deployed to Guantanamo Bay. He’s now back at the university, working to improve his pole vaulting skills along with being a student and a soldier.

South Dakota pole vaulter Kaleb Ellis joined the U.S. Army shortly after his 17th birthday. He represents the latest chapter of his family’s long and proud legacy of military service to the country.

After enrolling at USD in 2016, Kaleb Ellis, a sergeant in the U.S. Army, was deployed to Guantanamo Bay. He’s now back at the university, working to improve his pole vaulting skills along with being a student and a soldier.

VERMILLION, S.D.—When someone asks University of South Dakota pole vaulter Kaleb Ellis about his family’s military background, he might start by taking a deep breath.

Though still a college student-athlete, he could explain his own contributions to the service of our country first. But that would represent only the most recent chapter within a long and proud legacy.

He has several relatives – some gone now and others going strong – who have devoted large portions of their lives to protecting and serving the nation.

“I have a lengthy family history with the military,” he began. “My great-great grandfather was the first South Dakotan to die in World War I. He was a flamethrower so he was kind of a tough guy.”

Ellis was just getting started.

“My great grandfather was at Pearl Harbor in World War II when it was bombed,” he continued. “He passed away five or six years ago. My grandpa on my dad’s side was in the Navy during Vietnam. My dad did 20 years and retired from the Army Reserve. My step-mom did eight years in the military, then took a break, and then just re-enlisted. My uncle has done 21 or 22 years of active duty in the Air Force, and my aunt did eight years active duty in the Air Force as well.”

Ellis was providing context in response to a question about why a high school kid with a lot of options would feel drawn to serve. And then he added what by this point was unnecessary:

“Being patriotic and serving our country has been part of our family for a really long time,” he said. “I wanted to do my part and follow in their footsteps.”

The Brookings graduate, who won the 2015 state high school and Howard Wood championships in the pole vault as a senior, joined the Army shortly after his 17th birthday. He spent his summer after his senior year in basic training and then moved on to Advanced Individual Training (AIT). He enrolled at USD for the second semester in 2016.

“Basic training breaks you down as a civilian and then builds you back up with the mindset of a soldier,” Ellis said. “The AIT is training for your actual job.”

He became part of the military police force 31B, or 31 Bravo as it is commonly called. He went to school for the spring semester and then again the following fall.

Just when college pole vaulting was starting to make some sense, he was deployed to Guantanamo Bay.

All told, he left school for a year.

Now a sergeant, Ellis resumed pole vaulting at USD but initially struggled. He’d been lifting weights and was as strong as ever, but it wasn’t the kind of muscle that translated so well to pole vaulting.

No matter. He was going to do whatever it took.

“When you spend a year away from school and you tackle this whole other life, it would be easy to say ‘Okay, I’m just going to pursue this side of it,’” said USD pole vaulting coach Derek Miles. “But when Kaleb came back, it was like ‘Let’s get to work.’ He’s still committed to school; he’s still committed to pole vaulting. It’s interesting to see him stay aggressive in all three areas. Most people would let one go and focus on the other two.”

It wasn’t easy getting back into the swing of things. That included pole vaulting and everything else.

“The most challenging part of it is not being around your friends and family while the rest of the world is moving forward,” Ellis said. “It’s like you were in place for a year and when you came back you had to play catch-up with everyone.”

Last spring, Ellis posted a 16-foot, 5.5-inch vault, the best vault of his career, while finishing third at the Sioux City Relays. It was the first time he’d been able to focus and get better at something that has always been that third thing, along with being a student and a soldier. He goes into his final year hoping to improve on marks while providing assistance to the top-rated college pole vaulting crew in the nation. It includes three-time national champion Chris Nilsen, of course, but the head coach represents the rising tide that raises all boats.

“Derek is great at using different ways of explaining things to us,” Ellis said. “He’s great at showing the reasoning and the physics and the history behind all the drills that we’re doing. It’s humbling and beneficial to be coached by one of the best coaches in the nation. And then being a part of the No. 1 team in the nation. I feel lucky and blessed to have the opportunity to vault with these guys.”

Miles works with Ellis, the vaulter. The rest of it he respects. It can’t be as easy as the sergeant makes it look.

Instead, Miles, like everyone else, sees a good student and solid vaulter looking to finish strong, and someone who has made a commitment to the country most of us just read about.

“It’s fun to have a kid in your program who is doing something special like this,” Miles said. “It’s easy to take for granted things like our house or our car, and most importantly, being able to do what we want to do in this country. We have those things because of kids like him.”

It goes back to a family legacy in one sense, but it goes deeper than that. Nobody made Ellis decide at age 17 that he should become a soldier. He took on that challenge on his own.

“I think it’s very important to do your part for the U.S.,” he said. “That might be military or maybe law enforcement or just being a good person in general. I think that the U.S. has the most opportunity in the world, and I think we should all, to the best of our abilities, try to repay for those opportunities we’ve been given. This is one of the ways I can try to give back.”