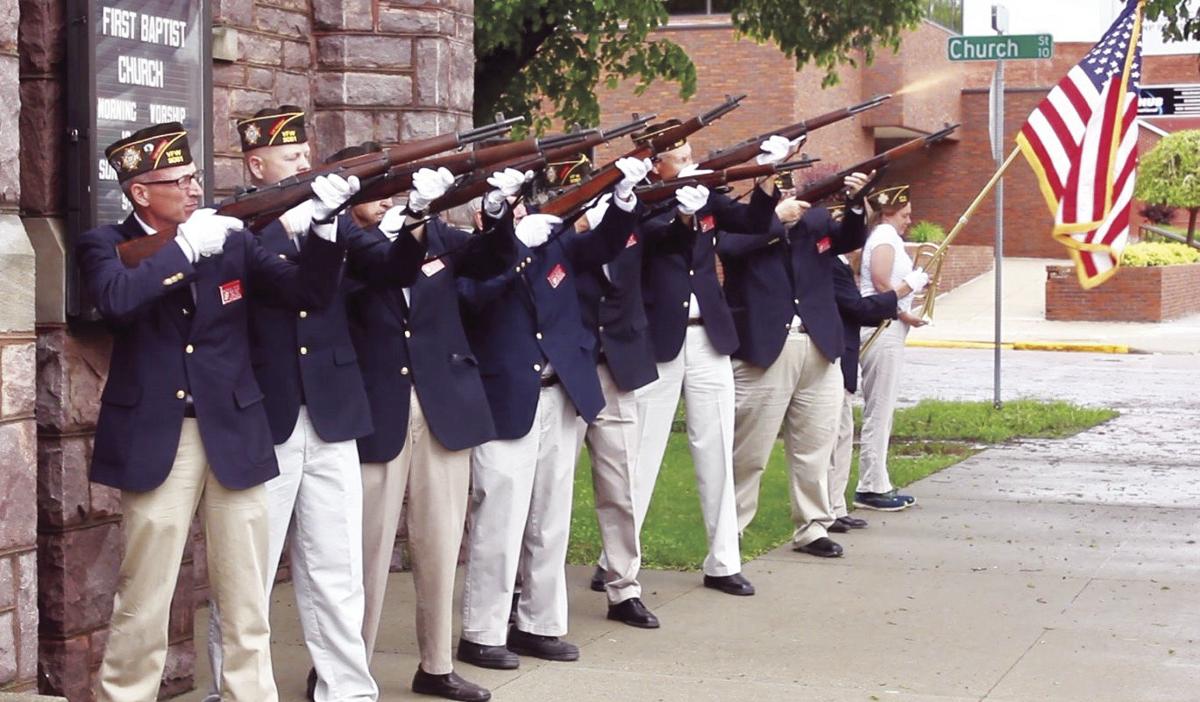 The Vermillion VFW Honor Guard fires a rifle salute at the conclusion of Monday's Memorial Day service held in the First Baptist Church in downtown Vermillion. 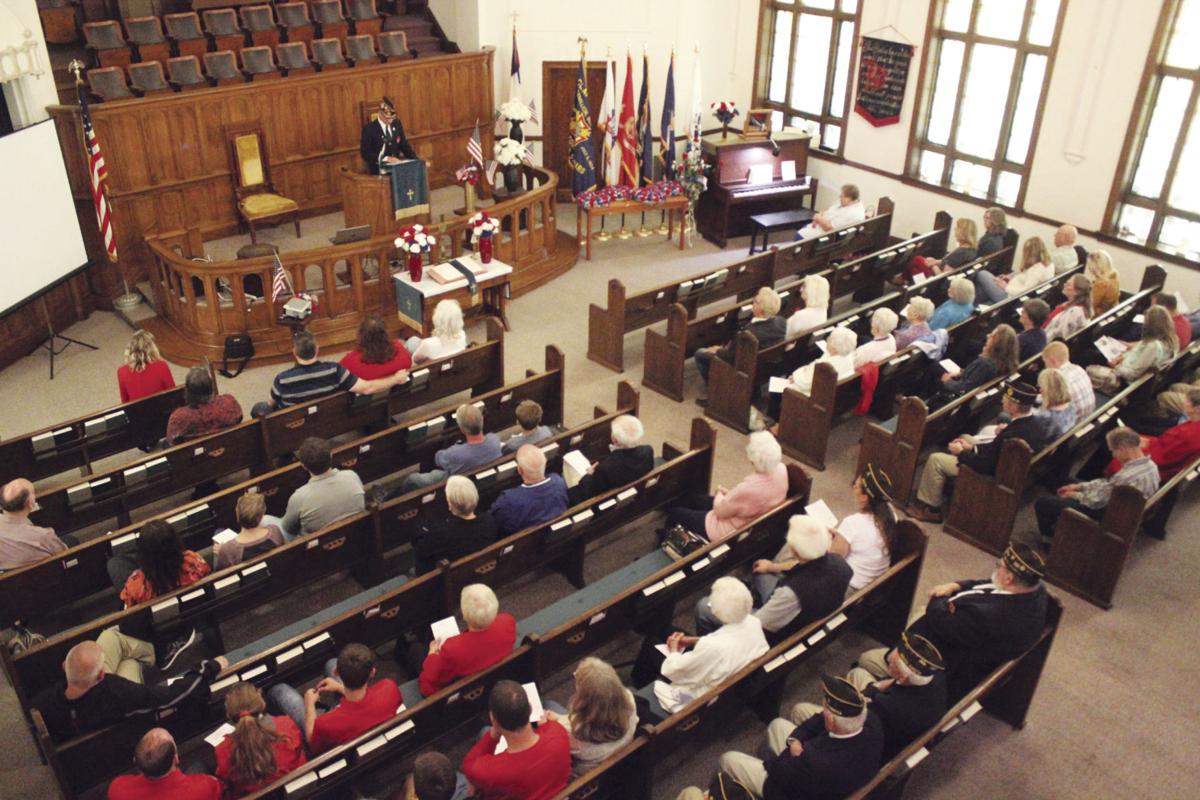 Andy Howe, quartermaster of the VFW Post 3061 of Vermillion, reads the honor roll call of local men and women who died while defending the nation in the U.S. Armed Forces during Monday's Memorial Day observance, held in the First Baptist Church of Vermillion.

The Vermillion VFW Honor Guard fires a rifle salute at the conclusion of Monday's Memorial Day service held in the First Baptist Church in downtown Vermillion.

Andy Howe, quartermaster of the VFW Post 3061 of Vermillion, reads the honor roll call of local men and women who died while defending the nation in the U.S. Armed Forces during Monday's Memorial Day observance, held in the First Baptist Church of Vermillion.

People who attended Monday’s Memorial Day service in Vermillion learned about the rather brief life of CPL. Lloyd M. Thompson, who grew up in Clay County and lost his life in defense of the United States during World War II.

University of South Dakota student Brett Hughes, who researched Thompson’s life from the time of his birth to his life’s end on a battlefield in France, said he learned more about one man’s life while sifting through records and newspaper clippings.

“This project has totally changed my perspective on the human costs of war,” Hughes, the keynote speaker at Monday’s service, held in the First Baptist Church, told a near capacity crowd. “Before this project, I viewed death tolls as just mere statistics. For example, 400,000 Americans gave their lives during World War II; 58,000 Americans died during the Vietnam War and 200 Americans died in the Gulf War, just to name a few wars.

Hughes, a junior at USD studying history education, was tapped to give the address at Monday’s service by its organizer, VFW Post 3061 of Vermillion. For the past four years, the speaker at Vermillion’s Memorial Day service has been a USD student chosen as the winner of the “Clay County’s Fallen” research contest sponsored by the VFW in association with Dr. Jing Williams of USD’s School of Education.

In the “Clay County’s Fallen” contest, education students research the lives of military service members from Clay County who were killed in action.

“When Dr. Williams first introduced this project, I was overwhelmed with by the amount of research and hard work that came along with this,” Hughes said. “But I have to say, after completing this project, it’s been of the most important things I’ve done at USD and in my life.”

Thompson’s parents were both Danish immigrants, according to Hughes’ research. His mother, Marie Jonsen, arrived in the United States in 1904 when she was 4 years old. Eight years later, his father, Thomas Thompson arrived in the U.S. He was 23 years old.

“Both the Jonsens and the Thompsons came to the United States for economic activity because at the time in Scandinavia, the agricultural market was totally saturated,” he said, “as well as the fishing industry.”

Four years after Thompson arrived in the U.S. he met Jonsen. The couple was married in 1916.

“And a year later, on Aug. 21, 1920, Lloyd M. Thompson, my fallen hero, was born,” he said. “Lloyd’s childhood was very typical of many people who grew up in the South Dakota area. He helped his father out on the farm. Education was secondary to the farm -- not that education wasn’t important, of course -- it was just that the farm came before education.”

Hughes said Lloyd was expected to become a farmer, following in his father’s footsteps.

Lloyd attended school in the Irene area, but after attending high school for only one year, he dropped out.

“Presumably, he did this to help out his father on the farm,” Hughes said, “and he became an agricultural laborer, working over 60 hours a week from age 14 to 22. The only reason why he didn’t work past 22 was eventually he was drafted into the military.”

He noted that as a direct result of the United States becoming more involved in the European Theatre as well as the Pacific Theatre during World War II, more and more draft orders were being implemented throughout the country.

“On Oct. 15, 1942, Lloyd Merlin Thompson was directed to report to Army service at Fort Crooks near Omaha, Nebraska,” Hughes said. “At Fort Crooks, he received his physicals as well as his basic Army training. Eventually, he was placed into the 92nd Chemical Mortar Battalion.”

He was able to find this information with the help of the Clay County Historical Society and the numerous newspapers from the past stored at the Austin-Whittemore House in Vermillion.

Thompson began training for his eventual role in World War II in Europe. Two years later, his battalion was sent to England to continue its training.

“At this point, through his hard work and dedication, Lloyd Merlin Thompson became a corporal in his battalion,” Hughes said. “The 92nd Chemical Mortar Battalion was famous for its roles in Ardennes-Alsace, central Europe, northern France and the Rhineland campaigns during World War II.”

After training for five months in England, the 92nd Chemical Mortar Battalion arrived in France on June 27, 1944, just a few weeks following the allied D-Days invasion.

“Over the course of the 92nd Chemical Mortar Battalion’s history, 42 men were killed in action, 132 men were wounded in action and 149,502 rounds were fired by the battalion during World War II,” he said.

During his talk, Hughes showed slides of newspaper clippings and various documents that helped him piece together Thompson’s life and, ultimately, his death.

“Of the 42 men who gave their life in the 92nd Chemical Mortar Battalion, Lloyd Merlin Thompson was one of them,” he said. “Lloyd was killed in action in France during the Northern French campaign. The cause of his death is ultimately unknown, but we do know that he died fighting for his country. He gave up everything for his country.”

His body was recovered and brought back to the United States. Lloyd was laid to rest in Hillcrest Cemetery in Yankton County.

Hughes found the Thompson family’s application for a headstone marker and shared it with the audience in his slide presentation. The document is particularly power, he said, because it contains the signature of Lloyd’s mother, Marie Thompson.

“I cannot imagine what it was like for her to fill this out for her fallen son, who was only 23 years old and passed away fighting for a country that she immigrated to,” he said. “It must have been one powerful moment and absolutely incredible.”

Lloyd was survived by his brothers, Chester and Robert, and his parents. Nineteen years later, his father, Thomas, passed away at age 75.

“Thirty six years after Lloyd’s death, Marie passed away at the age of 82 in 1980,” Hughes said. “Thomas and Marie were buried in a joint grave in Hillcrest Cemetery with their fallen hero.”