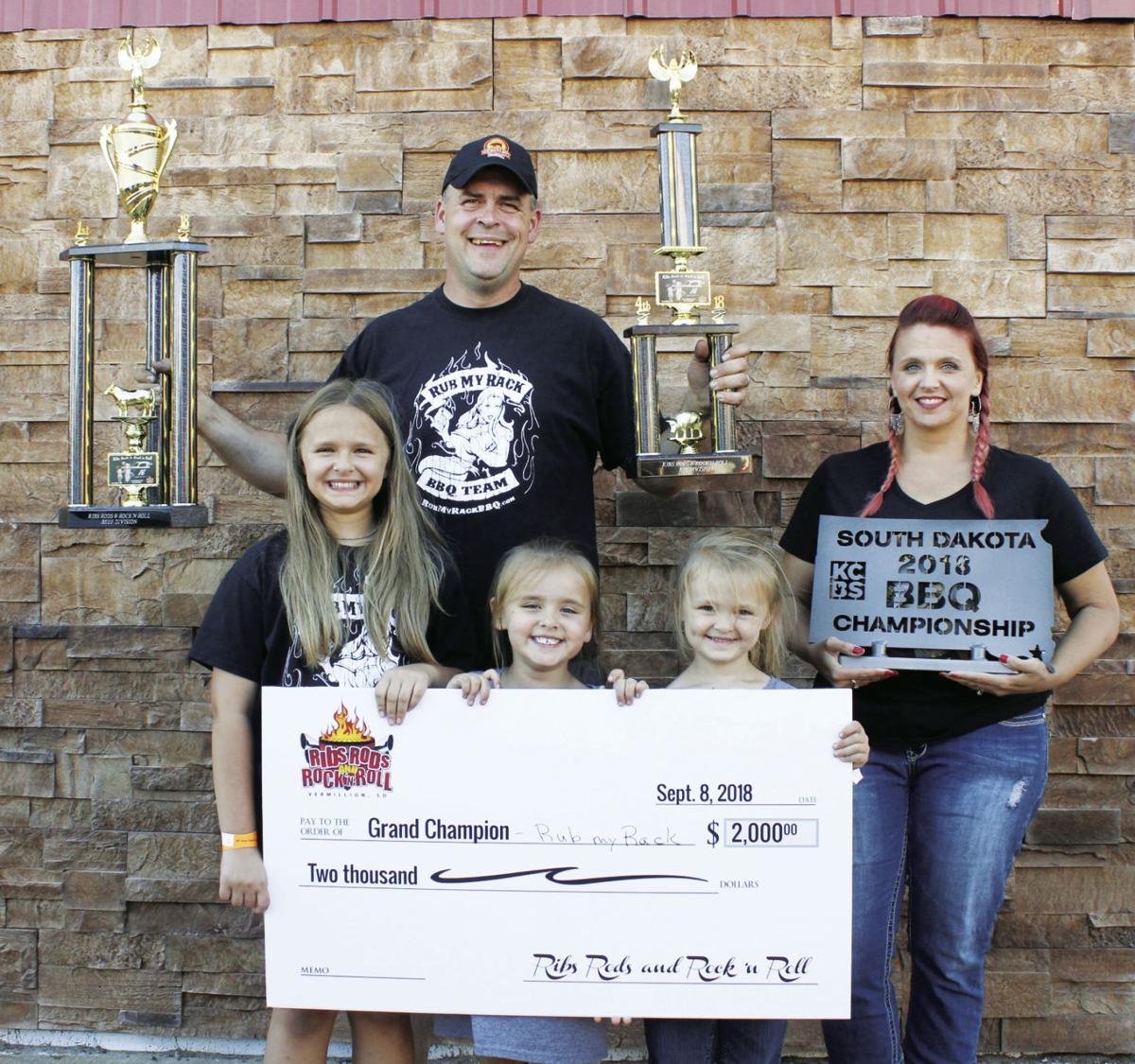 Stan and Tonia Dobosenski, and their daughters Zoe, Gemma and Maizie, display the trophies and $2,000 check they received at the awards ceremony of the 2018 Ribs, Rods and Rock ‘n Roll barbecue competition. The family operates Rub My Rack BBQ, and they received top honors in the beef division and ribs division and were named grand champions of the KCBS barbecue competition held in Vermillion during the event. 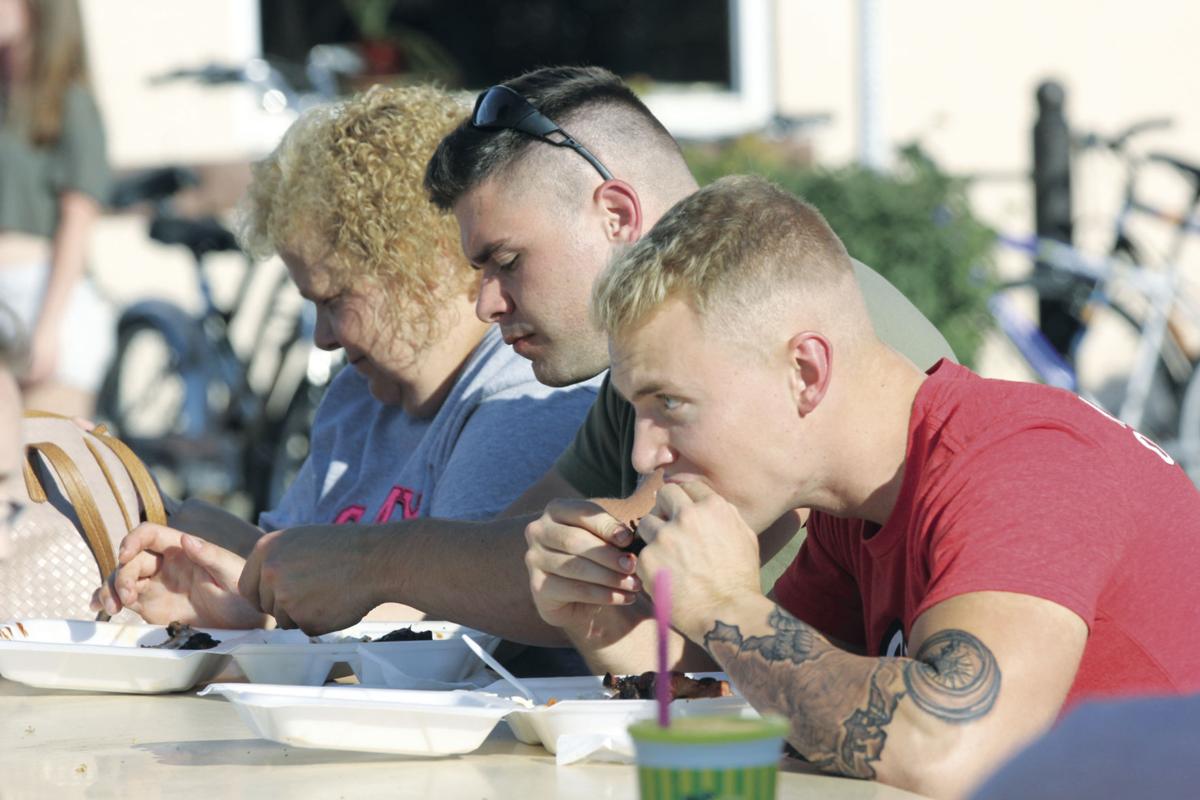 Thousands who attended the 14th annual Ribs, Rods & Rock 'n Roll event on Friday, Sept. 7 and Saturday, Sept. 8 in downtown Vermillion were attracted to the event by live music, a car show that featured over 250 automobiles and motorcycles, activities for kids and grown-ups alike and plenty of barbecue and other good things to eat.

Stan and Tonia Dobosenski, and their daughters Zoe, Gemma and Maizie, display the trophies and $2,000 check they received at the awards ceremony of the 2018 Ribs, Rods and Rock ‘n Roll barbecue competition. The family operates Rub My Rack BBQ, and they received top honors in the beef division and ribs division and were named grand champions of the KCBS barbecue competition held in Vermillion during the event.

Thousands who attended the 14th annual Ribs, Rods & Rock 'n Roll event on Friday, Sept. 7 and Saturday, Sept. 8 in downtown Vermillion were attracted to the event by live music, a car show that featured over 250 automobiles and motorcycles, activities for kids and grown-ups alike and plenty of barbecue and other good things to eat.

Stan and Tonia Dobosenski, operators of Rub My Rack BBQ from Fort Ripley, Minnesota, had their hands full Saturday afternoon while accepting congratulations and letting the moment sink in.

While accepting congratulations and juggling two other trophies and a large $2,000 check they had received in the awards ceremony held Saturday afternoon at Ratingen Platz in downtown Vermillion, they kept their three young and very excited daughters – Zoe, Gemma & Maizie – under control while letting the moment sink in.

Professional barbecue has become a major and rewarding part of the Dobosenski family's lives.

The five Dobosenkis, now in their fifth year of competing on the professional barbecue circuit, drove about six hours from their home in Fort Ripley to Vermillion last week to compete in the Vermillion barbecue contest.

Before becoming competitors, the couple served as judges at professional contests like the one just held in Vermillion.

“We were on vacation and we were down in Alabama – there was a barbecue contest down there – and we were just road-tripping, and a team from Alabama brought us to that side of the tent,” Stan said. “We sat with them during the contest as they did all of their turn-ins and watched and tried to help out and we were hooked.

“I said 'I never want to judge again; I want to try and compete' and so that's how we started,” he said. “I bought a little Weber Smokey Mountain smoker and cooked all that winter. There was an event in Brainerd, Minnesota and we just started out close to home.”

In 2013, the Dobosenkis formed Rub My Rack and registered it as a KCBS (Kansas City Barbeque Society) competition barbecue team.

Stan admits they were “greenhorns” as competitors in that very first barbecue competition.

“We didn't know what we were doing,” he said. “But we were hooked from that day on. It was fun.”

There were a lot of logistics to overcome in that first competition – The Great Northern BBQ held in Brainerd in August of 2013. Stan and Tonia were armed with their Weber Smokey Mountain, two Traeger pellet cookers, a tailgate Traeger, a variety of baby equipment and a babysitter.

Zoe, their oldest daughter, was five years old at the time. Gemma was 17 months old.

“Zoe and Gemma were in a front pack with Tonia all through the contest, and she was pregnant with Maizie at the time,” Stan said, laughing. “We're kind of nuts, I guess.”

“She cooked a burger, and she won, which is outstanding – I'm really proud of her for that,” Stan said. “The main KCBS four meat contest consists of chicken, pork ribs, bone-in pork shoulder and brisket. We did people's choice, as well. That's what we cooked.”

The trophies and championship check the Dobosenskis collected Saturday show just how far they've come in the world of barbecue competition in the last five years. When they plunged into the world of competitive barbecue they had “zero experience,” Stan said. “We didn't do backyard or anything. If you're going to jump, you've got to jump all in.

Stan credits the success he and his wife have experienced to the strict regimen they follow at each competition.

“We try to be as disciplined as possible,” he said. “We follow the exact, same routine and if we make changes they are very subtle. Timeline is everything. Flavor profile is important but tenderness is more important.

“We just try not to screw it up,” Stan said, “and not do something bone-headed with all of the distraction that we have.”

The process the Dobosenskis follow began at 4 a.m. Saturday morning, when Stan fired up their smoker and began preparing some of the first meat that would be judged that day.

“I think this is our 42nd contest. The first year we did one contest and the second year we did two,” he said. “I think we did seven the third year … last year, I know we did 15. My numbers might be skewed a little, but we just kind of progressed each year. We're going to go the American Royal next weekend down in Kansas City, Kansas, so we'll be cooking down there.

“We want to get one more cook in before the American Royal to try to make sure that we're dialed in,” Stan said. “Hopefully we didn't blow all of our good luck down here in Vermillion.”

Vermillion's Ribs, Rods and Rock 'n Roll barbecue event last weekend is the 12th competition that Rub My Rack BBQ has participated in this year.

“We started in January; we went to Lakeland, Florida, we've hit Papillion, Nebraska, and we've done some in Minnesota and South Dakota,” he said. “We've done eight of them in our own state this year.”

When the Dobosenskis were only in their second year of operating Rub My Rack BBQ in KCBS competitions, they were among the contestants in the Vermillion event.

“That was our first year here and our only year here,” Stan said. “We always missed it. It's a great event put on by great people and everything else that surrounds it. This is just a fantastic package.”

He couldn't help but mention the fine dining offered downtown for people – such as professional barbecue masters like he and his wife – who may want to try to dine on something different than smoky, spicy beef or pork.

“Cafe Brule … oh my gosh,” Stan said, referring to the popular restaurant located right in the heart of downtown Vermillion where the barbecue competition took place. “Those beignets … Cafe Du Monde (a renowned restaurant in New Orleans, Louisiana) has nothing on those, man, that's for sure.

“We like Vermillion,” he said. “You can tell the community is really behind it (Ribs, Rods and Rock 'n Roll). It's a lot of fun.”

Sorry, there are no recent results for popular articles.

Sorry, there are no recent results for popular images.