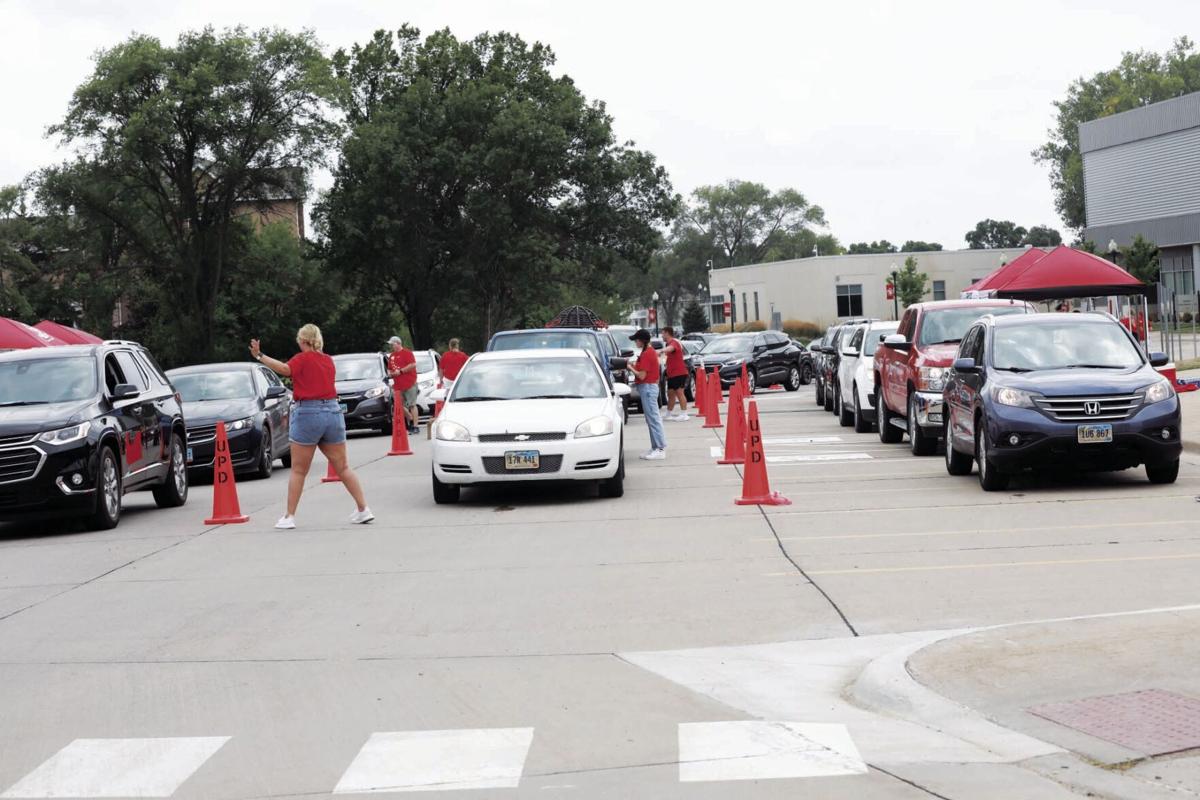 University student volunteers usually deal with two lines of cars carrying new University of South Dakota students and their belongings to Vermillion on move-in day. This year, three lines snaked through the parking lot in an attempt to ease the bottleneck caused by Highway 50 bypass construction. 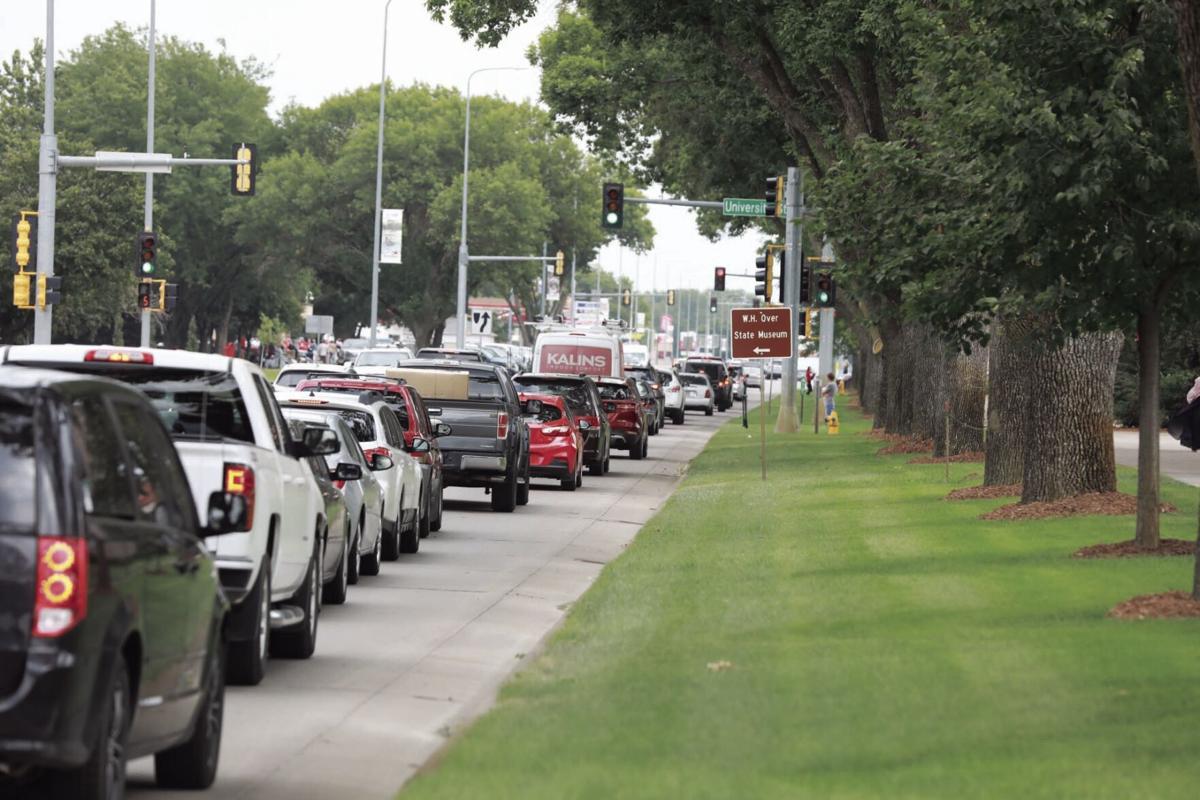 Motorists on Cherry Street experienced bumper-to-bumper traffic as a large number of University of South Dakota students, many of them freshman, made their way to Beede, Mickelson, Richardson and Olson halls which are located near Cherry Street. 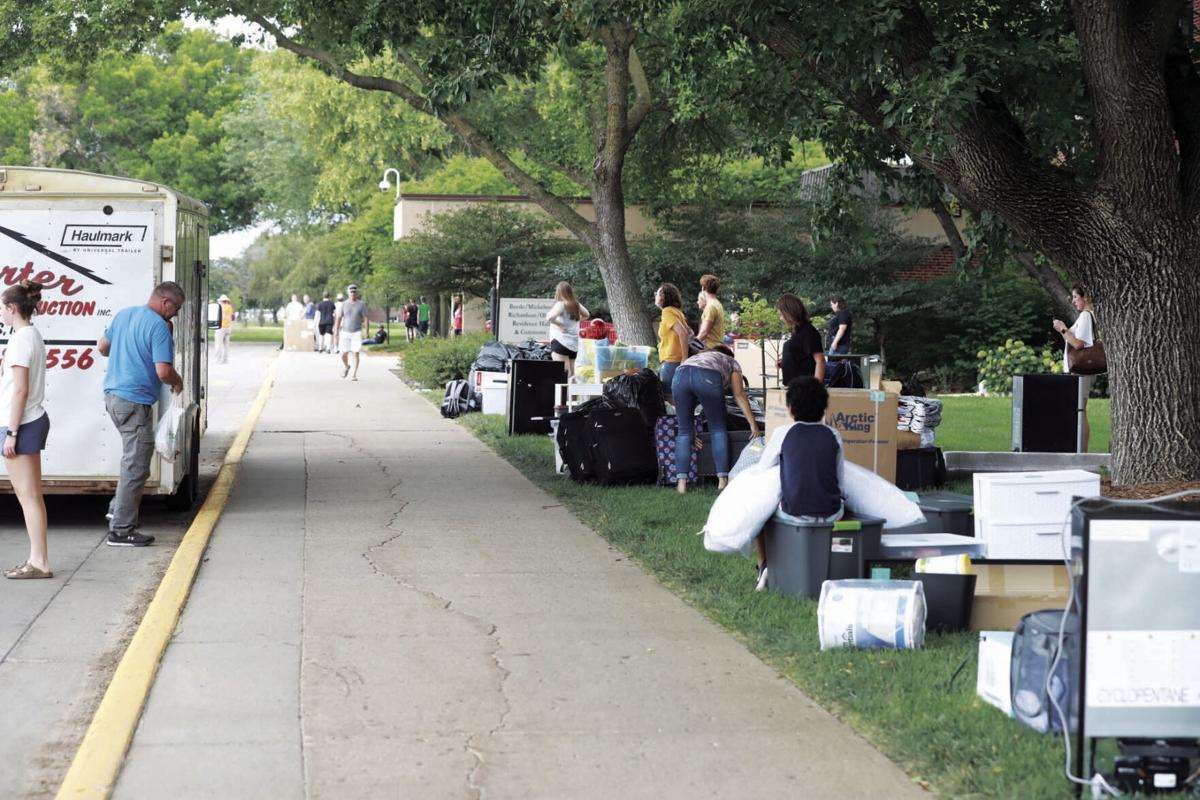 Incoming students at the University of South Dakota patiently wait in line Friday to move their belongings into their rooms in the Beedle/Mickelson residence hall complex.

University student volunteers usually deal with two lines of cars carrying new University of South Dakota students and their belongings to Vermillion on move-in day. This year, three lines snaked through the parking lot in an attempt to ease the bottleneck caused by Highway 50 bypass construction.

Motorists on Cherry Street experienced bumper-to-bumper traffic as a large number of University of South Dakota students, many of them freshman, made their way to Beede, Mickelson, Richardson and Olson halls which are located near Cherry Street.

Incoming students at the University of South Dakota patiently wait in line Friday to move their belongings into their rooms in the Beedle/Mickelson residence hall complex.

Vermillion experienced something Friday that rarely happens in other South Dakota community.

Its population grew by roughly 10 percent. In one day.

University of South Dakota students, many of them freshman, flocked back to the community on Friday, Aug. 20 as classes are scheduled to begin on the campus on Monday, Aug. 23.

The traffic in Vermillion, especially in the area of the DakotaDome and on Cherry Street, was thicker than usual. The Highway 50 bypass that runs north of the campus usually serves as one of the routes to the DakotaDome, where new students receive the keys their rooms, packets of information and other needed items from a group of volunteers.

The bypass is currently under construction. That left Cherry Street, located south of the DakotaDome, as a major traffic artery Friday and it showed. Cars, vans and pickups, filled with new students, friends and family members and the students’ belongings, were often lined up bumper to bumper as they made their way to student housing on the USD campus.

“The difference is because of Highway 50 construction, we have to bring everybody down Cherry Street,” said Scott Pohlson, vice president of enrollment, marketing and university relations at USD. “That’s really why it looks a little different today. It’s only due to the construction on Highway 50.

“The biggest problem we have, but I think the community understands, is just coming down Cherry Street,” he said. “It’s much more of a bottleneck there. We’re excited about what’s happening with Highway 50. I know that sounds a little bit weird, but widening that makes sense in the future. We’re making it work.”

Friday he was at the DakotaDome, where groups of student volunteers from the university’s sorority and fraternity community, student athletes and various USD clubs and organizations helped keep a well-organized process moving.

Likewise, a group of volunteers from those same university-affiliated groups were stationed at university housing to help new students move their belongings from their vehicles to their dorm rooms.

People from not just the Midwest but also from coast to coast arrived at Vermillion on Friday.

Izzabela Goerke, who transferred from Grand Canyon University in Phoeniz, Arizona to USD, arrived in Vermillion Thursday night. She will be playing softball for the Coyotes as a sophomore next spring and she and her parents dashed into the DakotaDome Friday afternoon for a scheduled meeting with her coach and teammates.

Goerke’s home for the school year is Coyote Village and she loved the move-in process she experienced Thursday night.

“It was just me and my parents and I tend to not really like to get help from a lot of people,” she said, laughing. “I’m glad I did it early.”

Goerke and her parents, Whitney and Nate, drove two days this week in their journey from Arizona to Vermillion.

Moving their daughter to USD housing “was a great experience,” Whitney Goerke said, “and all of the staff are really knowledgable and helpful here. It’s a beautiful campus – green. We’re from the desert so, it’s just so beautiful.”

Nate Goerke said he is impressed with the organized process USD has put into place to make move-in a less stressful time after they had driven from Arizona.

“It was a nice, two-day drive, but we got to see a lot of the grassland instead of the desert, which was nice,” he said.

Goerke first visited Vermillion and the USD campus in June.

“We saw the softball facilities and the athletic facilities that are planned here and they are really cool,” she said.

A main factor in Goerke’s decision to transfer here is USD’s “really good coach,” she said.

“I saw a car today from New Jersey. Obviously, we always get Colorado, Nebraska and Iowa and our favorite, which is South Dakota,” Pohlson said. “We love to see kids from our home state come here.

“It’s such a great energy. I’ve worked at USD since 2009 and this is always my favorite day,” he said, “especially if it doesn’t rain.”

A chance of precipitation had been in the forecast for Vermillion on Friday, but early that afternoon, not a drop had fallen.

Approximately 1,500 students would be settling into the community on Friday, Pohlson said.

“We’ll see how that number shakes out. We had a lot more students move in earlier (this year),” he said. “We’ve done that with sorority life, athletics, the marching band has been here. All of those students have reduced the number that we’ve had today, but roughly 1,500 to 2,000 is usually what moves in over the course of the weekend.

COVID-19 greatly changed the university move-in process last year, extending it over a three-day period. This year, thanks to the vaccines and slowing of the infection rate, more normal practices were utilized Friday.

“Last year, we spread it out a lot more. We specifically took Thursday, Friday and Saturday and made that three days of move in,” Pohlson said. “What we did this year is we still spaced it out in terms of our time slots which really helps us reduce the number that are here during a certain half hour or 15 minutes, but you can obviously tell that it’s not what it was last year. So far, things have gone the way they were planned.”

There is a lot going on in Vermillion right now, ranging from the Highway 50 bypass construction, which had a large effect on Friday’s move-in, to the Downtown Streetscape work, which didn’t affect move-in much, but may provide new traffic detours for new students to learn.

“What we always find fascinating is that no matter how much we communicate, you still the families that say, ‘I’m not sure what direction I’m supposed to go,” he said. “’ Can I just drive through the line? Can I just walk over to my residence?’”

Students and families are told they can’t, as that would just add a bit of chaos to an orderly process.

“We try to make this coordinated. We get a lot of great comments from families. They’re so thankful that we’re organized. We even have a couple from our administration team that have moved children onto other campuses and they look to see what other are doing,” Pohlson said. “They said ours (move-in process) is really well coordinated compared to what they saw and that’s the goal.

“The goal is to make it easy because it’s pretty stressful for families today, especially with the new students coming here,” he said. “A couple of moms had some tears and a couple of the dads were trying not to show the tears. There are emotions with today, too, so we just try to reduce that whole stress level.”