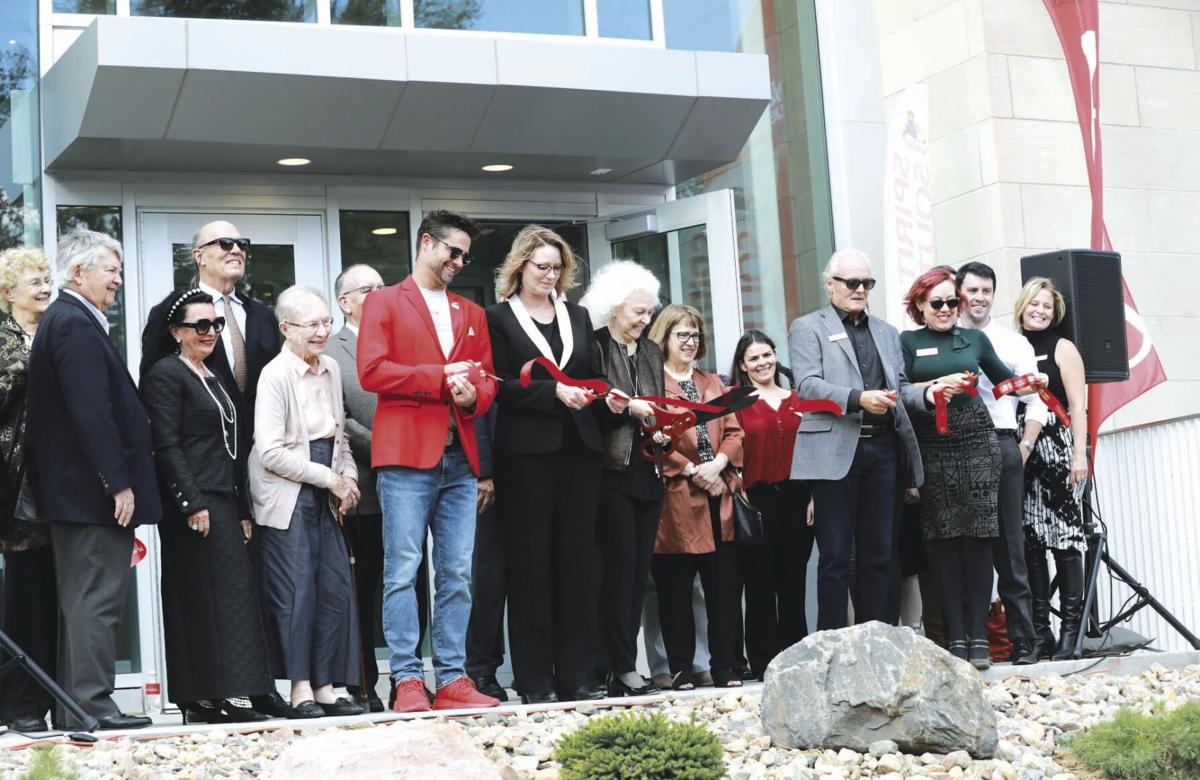 As past and present members of the National Music Museum's Board of Trustees watch, University of South Dakota President Sheila Gestring and Cindy Lillibridge cut the ribbon to mark the completion of the Lillibridge Wing of the museum during a Friday afternoon ceremony. Holding the ribbon are Nate Welch, president and CEO of the Vermillion Chamber and Development Company, Gestring, Lillibridge, Scott Lawrence, Scott Lawrence, chairman of the National Music Museum Board, and Vermillion Mayor Kelsey Collier-Wise. 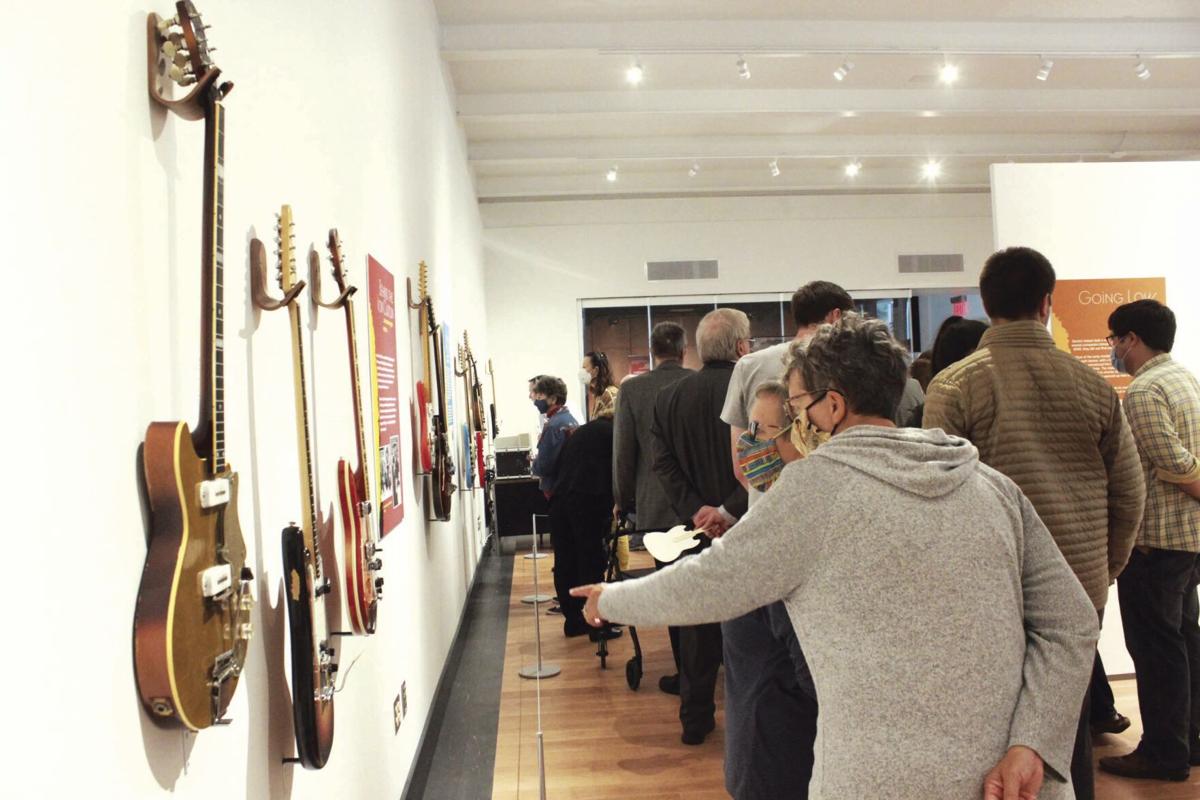 People who attended the ribbon cutting of the National Music Museum’s Lillibridge Wing escaped a strong South Dakota wind as they stepped inside the addition to view a temporary exhibit entitled “NMM Goes Electric.” The exhibit interprets the history of electric stringed instruments through objects from the permanent collections of the museum. Many of the items have never been previously highlighted or displayed.

As past and present members of the National Music Museum's Board of Trustees watch, University of South Dakota President Sheila Gestring and Cindy Lillibridge cut the ribbon to mark the completion of the Lillibridge Wing of the museum during a Friday afternoon ceremony. Holding the ribbon are Nate Welch, president and CEO of the Vermillion Chamber and Development Company, Gestring, Lillibridge, Scott Lawrence, Scott Lawrence, chairman of the National Music Museum Board, and Vermillion Mayor Kelsey Collier-Wise.

People who attended the ribbon cutting of the National Music Museum’s Lillibridge Wing escaped a strong South Dakota wind as they stepped inside the addition to view a temporary exhibit entitled “NMM Goes Electric.” The exhibit interprets the history of electric stringed instruments through objects from the permanent collections of the museum. Many of the items have never been previously highlighted or displayed.

It’s been approximately three years since the doors of the National Music Museum were closed and work began on its new Lillibridge Wing expansion.

On Friday, the Vermillion community and those who love music and the museum gathered to celebrate. The museum remains closed as renovation of the Carnegie Library building that serves as home to most of the museum’s thousands of instruments continue.

Following a ribbon cutting ceremony outside of the doors of the Lillibridge Wing, however, those doors were opened, allowing people to enter and tour the new addition’s first temporary exhibit, “NMM Goes Electric,” in the Groves Gallery of the new wing to the museum.

Friday’s ceremony was a joint effort, hosted by the NMM, the University of South Dakota and the Vermillion Area Chamber & Development Company (VCDC).

“While the National Music Museum isn’t a new addition to our community, this much-awaited day marks the celebration of a significant investment,” said Nate Welch, president and CEO of the VCDC. “The VCDC and our partners know the value of a community that is dedicated to enriching the quality of life in the Vermillion area and throughout South Dakota.”

The investment made to improve the museum, he said, continues the effort to reach that goal of a better quality of life in the community and state.

“As the premiere music museum and the best institution of its kind in the world, it is a true gem for our community and our state,” Welch said. “The National Music Museum puts Vermillion on the map and we’re proud to be the arts and culture capital of South Dakota.”

He noted that the NMM has been recognized as a landmark of American music by the National Music Council and called a “musical Smithsonian” by the New York Times.

“We know that visitors from across South Dakota and further afield will come back right here to Vermillion,” Welch said. “As a community, we look forward to the new programming and exhibits that have been planned by the National Music Museum and its fantastic, one-of-a-kind staff.”

“The National Music Museum is so well known to the state, to the University of South Dakota, to the nation and quite frankly, the world,” said University of South Dakota President Sheila Gestring. “It’s considered one of the top collections of rare musical instruments and, quite frankly, an epicenter for musical instrument research and preservation.”

She noted that the museum was founded in 1973 and its collection of instruments now exceeds 15,000 pieces that span hundreds of years of culture.

“The National Music Museum’s many prized possessions include the world’s earliest cello, the oldest known playable harpsichord, a peacock-shaped lute from the 19th century India and guitars owned by the likes of Johnny Cash and Elvis Presley,” Gestring said, along with extensive archives of musical instrument-related materials.

“In partnership with the USD College of Fine Arts, the National Music Museum offers the only graduate specialization in musical instruments in all of South Dakota,” she said. “This shrine to music, as it was once known, is a world-class collection and it deserves this world-class facility.”

In March of 2018, the NMM announced its plan to add approximately 16,000 square feet that includes two floors plus an underground level to the existing Carnegie building. Funding for the estimated $9.5 million building project was raised by the museum’s board, with up to $1.5 million of that amount, representing upgrades to HVAC and facilities infrastructure, to be covered by the University of South Dakota.

“Work on the expansion began in the spring of 2019 and while we were sad to see the doors closed, there was definitely a feeling of excitement and energy that something momentous was about to happen,” Gestring said. “This is momentous. This is a beautiful space.”

The Lillibridge Wing was constructed because, with some 15,000 musical instruments currently in the NMM’s collections, as well as many thousands of supporting artifacts and materials, the facility needs not only more public display area but more storage and conservation options.

“The Vermillion Area Chamber and Development Company has been instrumental to the museum’s project and partnered with the National Music Museum to build and finance an off-site storage structure call The Center For Preservation and Research,” the university president said. “Instruments have been stored there during the renovation and during the expansion.

Cindy Lillibridge, Bonesteel, one of the NMM’s trustees, gave the critical donation to make the new wing possible. Her late husband, Thomas, who passed away in 2017, was active in the leadership and development of the museum in recent years. The performance hall has been named the Janet Wanzek Performance Hall to honor a late friend of the museum. The Groves Gallery honors one of the museum’s trustees, Jason Groves and his wife, Betsy.

“The National Music Museum is truly a treasure in our community and we are blessed to have it,” Mayor Kelsey Collier-Wise said. “We absolutely do not take it for granted.”

The facility was known as the Shrine to Music Museum and was a special place for the mayor as she grew up in Vermillion, she said, offering her a place to skip her American Government class every Friday during her senior year to sit in the audience of the Brown Bag Lunch concerts held there.

“The world changes and institutions need to change and grow with it,” Collier-Wise said. “The Lillibridge Wing and the renovations to the Carnegie Library wing are not only taking the National Music Museum to the next level, they are elevating Vermillion as a visitor and research destination, as well.”

She credited the late Mayor Jack Powell, who passed away in 2020 and served as treasurer on the NMM’s board of trustees, as recognizing the importance of those museum improvements.

“It is why he championed the strong partnership among the city, the VCDC, the museum and the university,” the mayor said. “I wish he was here to see the beautiful results of his efforts.”

“I spread the gospel everywhere I go in South Dakota and the region about this place and the greatest collection of musical instruments in the world,” said Scott Lawrence, chairman of the National Music Museum Board. He noted that the King cello, “is the rarest and most priceless instrument on the planet that exists today and we have it. But that’s only one of over 15,000.

“This expansion allows us to continue to come back and make this collection available to research, to students, to visitors and put us on the map,” he said.

Lawrence honored Cindy Lillibridge, who was present at Friday’s ceremony, and her late husband, Tom, for their efforts and leadership on the museum’s board of trustees.

“Cindy, I’m sure Tom is looking down and smiling today,” he said. “Thank you so, so very much.”

Lawrence also offered thanks for the support received from the city, the VCDC and USD.

“Time, talent and treasure has been given to make this thing a reality,” he said. “There were times when we didn’t know if we could get this done, but, ladies and gentlemen, we’re here.”

He expressed his appreciation to the museum’s staff that worked tirelessly, moving instruments to prepare the new “NMM Goes Electric” exhibit in the Lillibridge Wing.

“I just couldn’t be happier and prouder today, and I’m so proud that you’ve all come to enjoy it with us,” Lawrence said.

The National Music Museum is located in the former 1910 Carnegie Library building on the campus of the University of South Dakota, at the corner of E. Clark and Yale Streets. The new addition is on the west side of the current building and includes a new ADA-accessible entrance into a glass-fronted two-story lobby.

Schwartz/Silver Architects of Boston, Massachusetts, created the integrated look of the addition. Koch Hazard Architects of Sioux Falls are the on-site authorities as architect of record.

Fundraising continues to support the redesign of exhibits, cutting-edge museum technologies, aesthetic enhancements, operational costs and the sustained growth of the museum’s endowment.