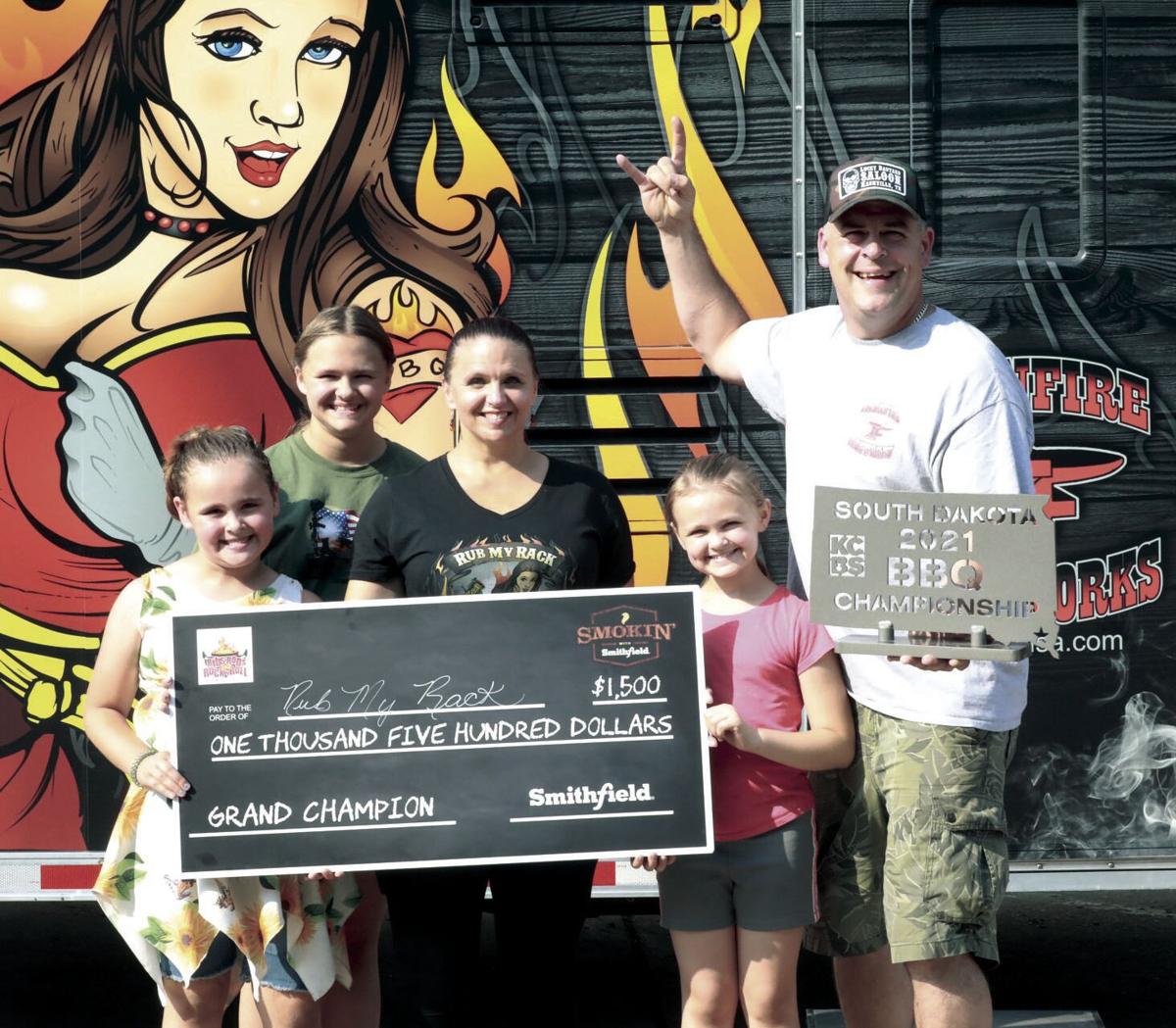 Gemma, Zoe, Tonia, Maizie and Stan Dobosenski display the trophy and $1,500 check they received at the awards ceremony of the 2021 Ribs, Rods and Rock ‘n Roll barbecue competition held in Vermillion Sept. 10 and Sept. 11. The family, from Fort Ripley, Minnesota, operates Rub My Rack BBQ. 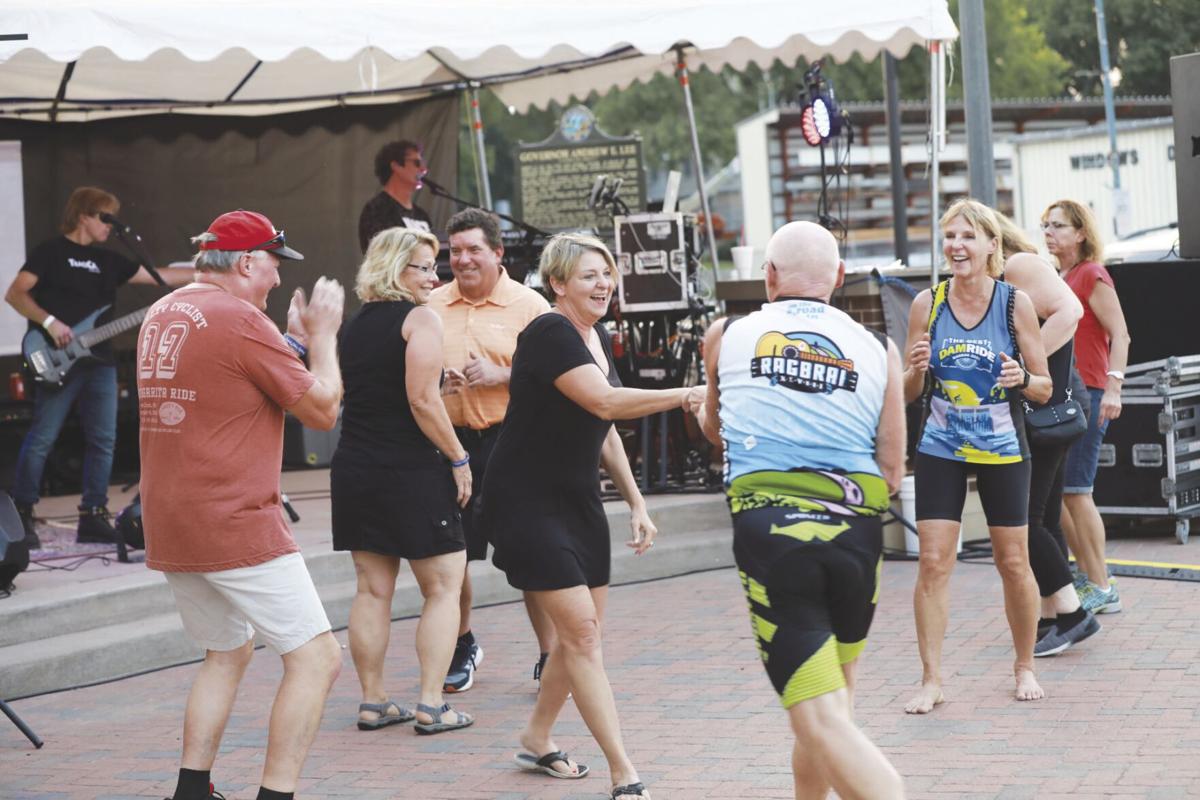 People dance to the music of JETT Saturday evening at Ratingen Platz in Vermillion. The live entertainment was part of the 17th annual Ribs, Rods and Rock 'n Roll held in the community last weekend. 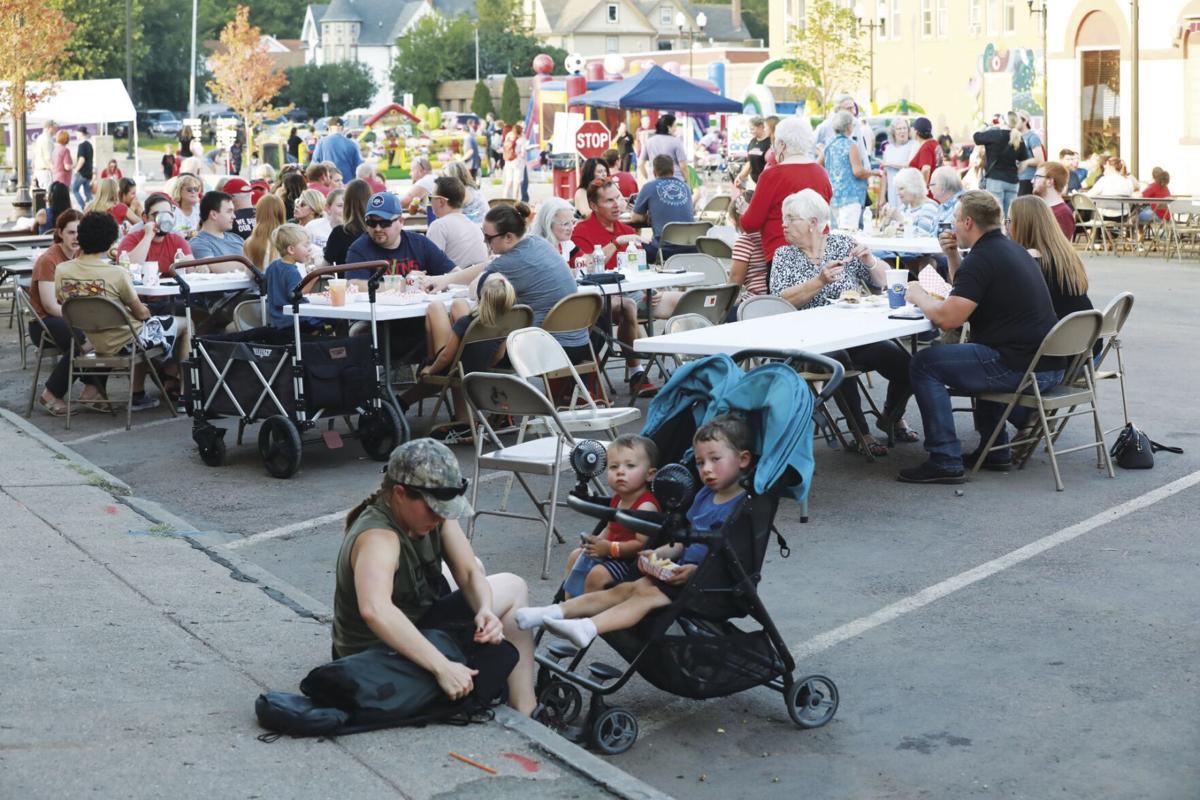 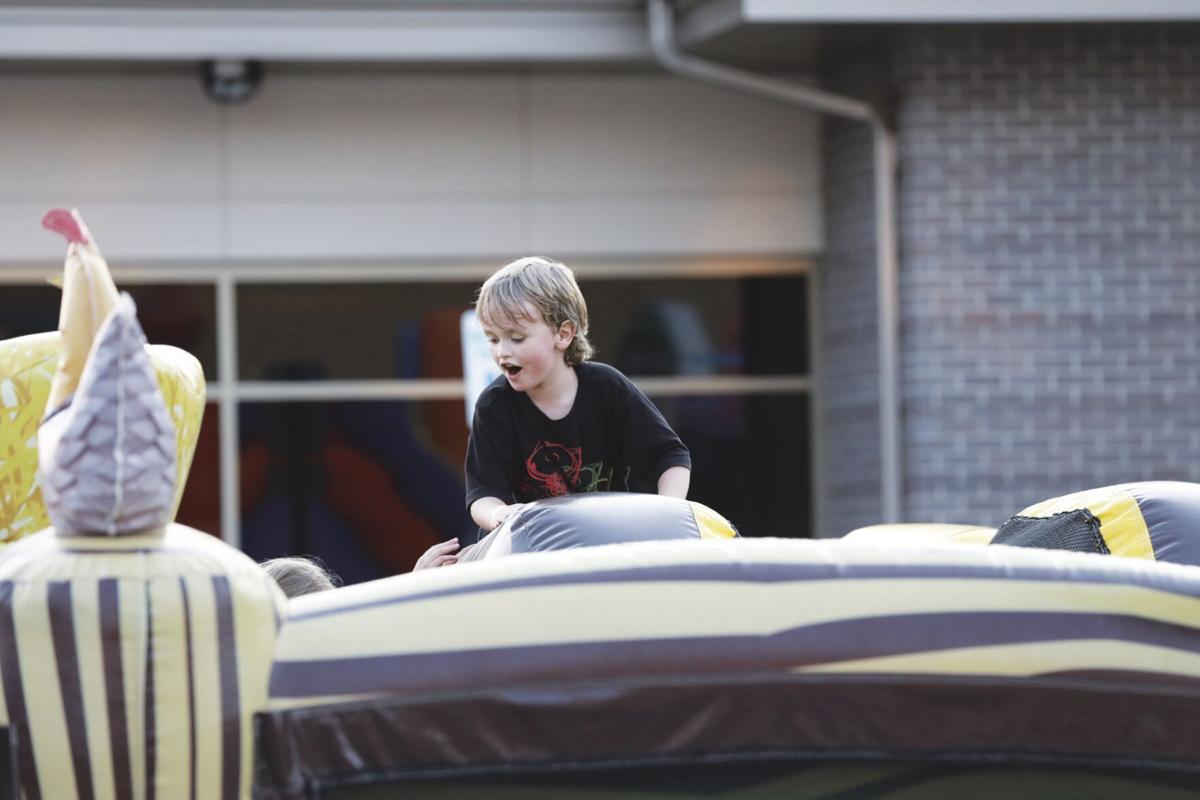 A youngster plays on an inflatable set up near Ratingen Platz Saturday as part of Vermillion's Ratingen Platz. The play area was a hit with the younger crowd that attended the annual event. 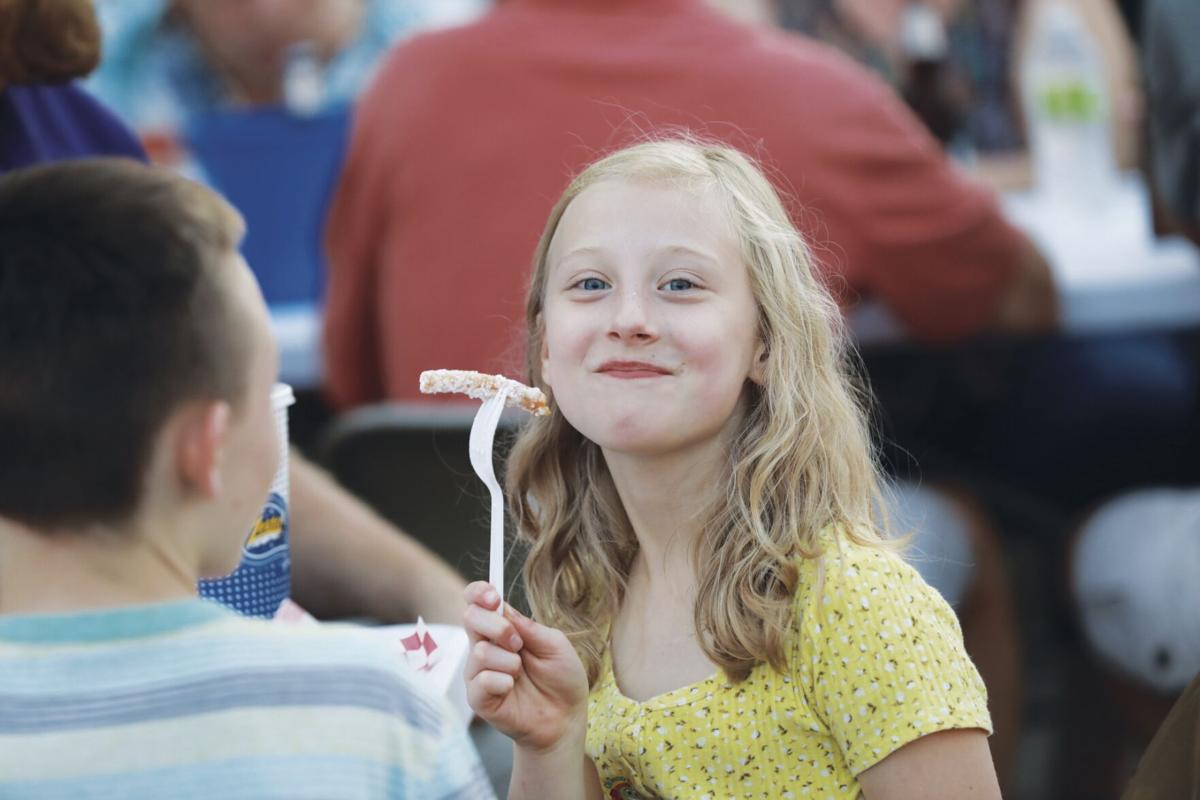 Gemma, Zoe, Tonia, Maizie and Stan Dobosenski display the trophy and $1,500 check they received at the awards ceremony of the 2021 Ribs, Rods and Rock ‘n Roll barbecue competition held in Vermillion Sept. 10 and Sept. 11. The family, from Fort Ripley, Minnesota, operates Rub My Rack BBQ.

People dance to the music of JETT Saturday evening at Ratingen Platz in Vermillion. The live entertainment was part of the 17th annual Ribs, Rods and Rock 'n Roll held in the community last weekend.

A youngster plays on an inflatable set up near Ratingen Platz Saturday as part of Vermillion's Ratingen Platz. The play area was a hit with the younger crowd that attended the annual event.

Stan and Tonia Dobosenski only had to walk about a block from Ratingen Platz in downtown Vermillion to their trailer to escape Saturday afternoon’s hot, humid weather.

It wasn’t an easy process, however. Stan and Tonia, while lugging a heavy grand championship trophy and a large check following the award ceremony where they were named top barbecue competitors at the 2021 Ribs, Rods and Rock ‘n Roll in Vermillion, were stopped dozens of times to receive congratulations from fellow competitors.

People stopped to also talk to the couple’s three daughters -- Zoe, 13, Gemma, 9 & Maizie, 8 -- and commend them for being part of a winning team.

The family eventually made it to their home away from home -- a trailer that serves as both their living quarters and their barbecue preparation area -- where they could collectively take a deep breath and their latest accomplishment sink in.

The Dobosenski family loves Vermillion and for the second time in four years, the Vermillion community showed its affection in return, awarding grand champion honors to the family’s Rub My Rack BBQ operation at the 17th annual Ribs, Rods and Rock ‘n Roll, held Sept. 10 and 11.

“It’s pretty exciting. We love Vermillion,” Stan said. “It’s almost a ritual for us to go to Cafe Brule when we’re down here because, in my opinion, their beignets are better than what you can get in New Orleans. It’s my favorite place, for sure.

“We try to compete at every South Dakota contest because we like it in South Dakota,” he said. “That might sound cheesy, but we do. There are some awesome folks over this way. It’s fun.”

Before the family launched Rub My Rack BBQ, Tonia was employed at a daycare and her boss started a barbecue contest in Brainerd, Minnesota.

“On the day of the contest, he said, ‘Instead of working at the daycare, you’re going to be a judge at this barbecue,’” she said.

At the time, Tonia and Stan were dating and she asked him to be a judge, too.

“We learned how to judge,” she said. “It was a lot more complicated than we thought it was going to be, but we learned and we ended up going to a competition after that and helped a team to cook after we judged.”

Stan found the cooking to be more fun than judging.

Years later, Tonia and Stan received fifth place honors for the barbecued chicken they entered in a hometown competition.

“Once we received that fifth place there, we were hooked and we’ve been competing ever since. Barbecue was forced on us,” she said with a laugh.

The family and its Rub My Rack BBQ has been competing for 13 years now and has participated in more than 80 pro contests.

“It’s a big family, sporting activity for us,” Stan said. “Tonia and I split duties; it isn’t just me by any means. She’s in the pit just as much as I am. It’s definitely a team effort.

“We like the sport of barbecue because we can travel all over the place, we can go as a whole family and you meet the nicest people whether or not they are fellow competitors,” he said.

The family traveled over 15,000 miles to find and compete in contests that were held during the COVID-19 pandemic.

Barbecue has nearly become a year-long activity for the family, especially as they serve as more than just competitors. Stan is currently past president of the Minnesota Barbecue Society.

“I was on that board for a while and I’ve been elected to represent KCBS (Kansas City Barbecue Society) members at the national level down in Kansas City,” he said. “A lot of our orbit is spent in barbecue.”

The family’s last competition of this year will likely be the American Royal World Series of Barbecue, the largest barbecue contest in the world, which kicked off Sept. 16 in Kansas City, Missouri and will conclude Sunday, if you don’t count the World Invitational, which Rub My Rack BBQ will likely be a part of this November.

It also may be a part of Pig Fest, held in Florida each January, which Stan admits is a good excuse to seek some warm weather and the girls enjoy because of Disney World.

“One of the neatest things about competing in this sport is it doesn’t matter how much money you have to spend on equipment because it’s person versus person, it’s skill versus skill,” Stan said. “With cooking, you can have a $20,000 pit and you might face-off with someone with a $150 drum smoker and that’s what makes it so neat.”

When not on the barbecue competition circuit, the family lives what sounds like a typical, normal life in Fort Ripley.

“We’re taking Zoe to hockey practice and helping other kids with their homework and keeping up with school stuff,” Stan said. “My line of work is a family business called Iron Fire Iron Works. It’s a steel fabrication, ornamental fabrication shop that I own.”

He bought the business from his dad, who still comes in a few days a week.

“It’s a small family business,” he said. “And we live out in the country. We have a bunch of animals -- chickens and ducks.”

“Yeah, our kids do silly things with that,” Tonia said. “Zoe has hatched five ducklings and put them in our bathtub for a while. We have a crazy house. We have chickens at home, we have a guinea pig, we have a dog, we have a cat -- the kids love animals.

The team effort that allows the Dobosenskis to barbecue extends beyond family. Neighbors help watch and care for all the animals at their home while they’re away.

“We have neighbors that look after things and that’s important,” Stan said. “And, back to the business, everybody covers everything and that’s a big thing to allow us to leave on a Friday or whatever.”

The Dobosenskis have also partnered with several businesses, from Royal Oak Charcoal and Traeger Grills, to a four-generation hog farm and a barbecue sauce company. The businesses’ names are prominently displayed on the side of their trailer.

“They’re all family businesses,” Tonia said. “It’s so much fun.”

“Our little orbit of all of the people,” Stan said. “It’s not just Stan and Tonia and family. It’s a whole big team, big time, and we appreciate the hell out of those people.”

The team also includes Radar, a 13-year-old dog of various mixed breeds rescued from a shelter, who stayed inside the air-conditioned trailer Saturday to escape the heat.

“He’s a good boy. He waits until the end of every competition and he has one piece of brisket,” Tonia said.