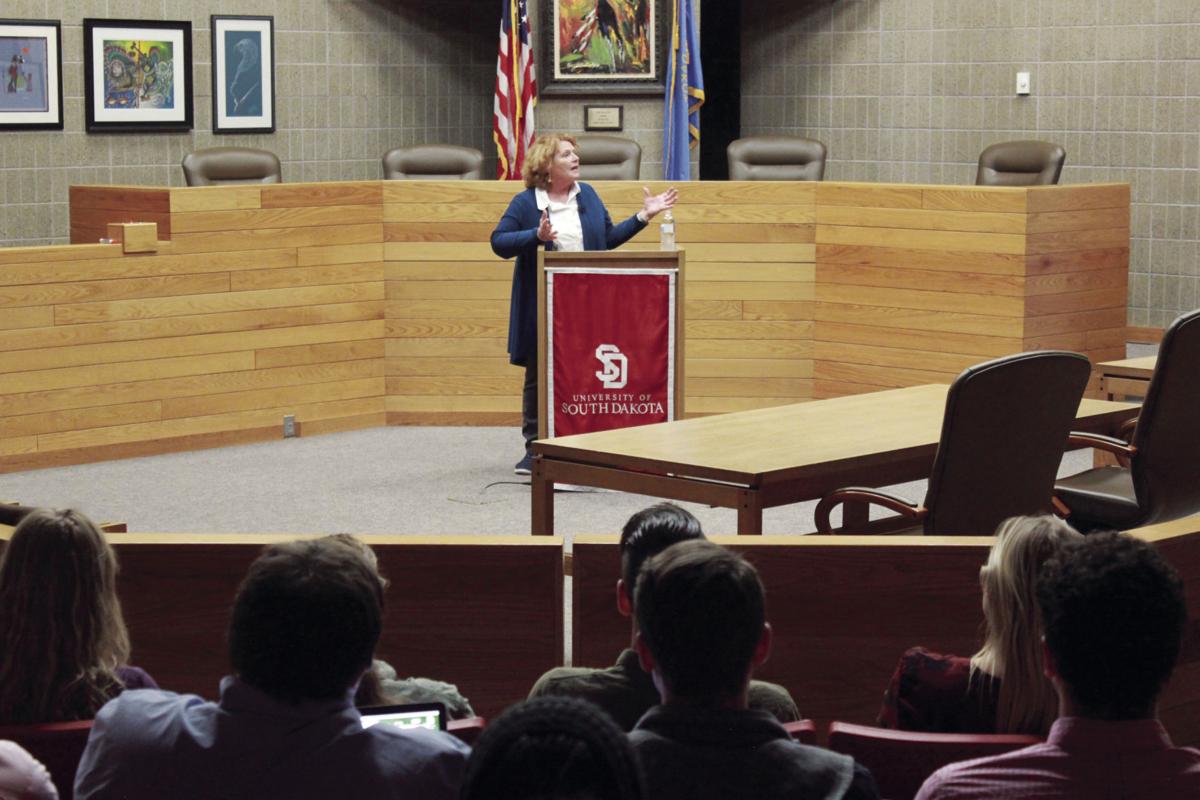 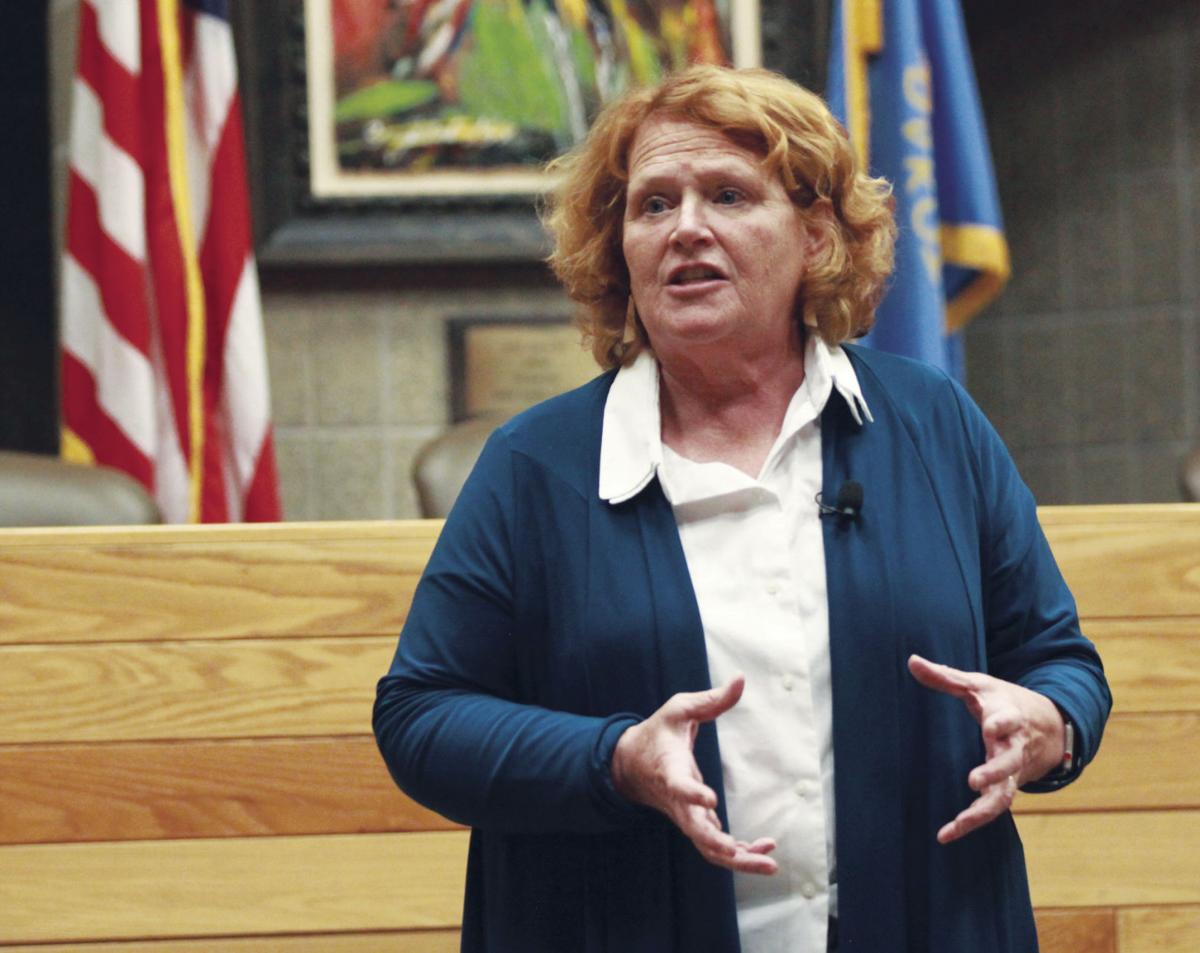 Sen. Heidi Heitkamp told the story Monday of Alva, a resident of the Standing Rock Reservation with borders that spill into both South Dakota and North Dakota.

She had lost a friend, the North Dakota senator said, and so she began going door-to-door on the reservation, counting all of the missing and murdered women on Standing Rock over the past 20 years.

“She came up with 25 names. She also came up with 10 names of missing or murdered men,” Heitkamp said Monday afternoon as she presented the annual Thurgood Marshall Lecture in the courtroom of the University of South Dakota School of Law in Vermillion.

The need to do something about the plight of women on U.S. Indian reservations led Heitkamp, along with Sen. Lisa Murkowski of Alaska and Sen. Catherine Cortez Masto of Nevada to introduce Savanna’s Act in the fall of 2017. The bill was blocked in the House, and was reintroduced earlier this year by Murkowski and Cortez Masto.

The bill is named after Savanna Greywind, a pregnant 22-year-old North Dakota woman and member of the Spirit Lake Nation who was brutally murdered in 2017.

Savanna’s Act, if approved, would require, among other things, annual consultations between U.S. attorneys and Indian tribes on sexual violence, training and technical assistance for tribal police, and new rules for reporting and sharing crime data and responding to violent crimes.

Heitkamp described abused and murdered women on U.S. Indian Reservations as being “invisible.”

She recalled hearing from a Native American acquaintance who said that in just 18 months, six women on the reservations had been killed in domestic disputes. Tribes on North Dakota reservations are made up of about 2,500 women.

“Think about that percentage. Think of if six women in Fargo, a community of 100,000, were killed in 18 months, what would be the community response?” Heitkamp asked. “Why is it that it doesn’t seem that nobody cares? Why is it that the FBI isn’t announcing their most wanted list, talking about what we need to do to cure this problem? Why are these women and children so invisible when we know, if you look at the statistics after the Department of Justice did their report, that Native women are 1.3 times more likely to be victims of crime?

“They’re more likely to be repeat victims of crime, sexual assault, physical violence and they’re most likely to be in a group of people whose offenders are inter-racial,” she said. “Where are they (the offenders) doing this? They’re doing it where they can get away with it, on the reservations.”

These types of crimes are also occurring in cities.

She noted that history teaches that the United States was colonized by genocide and when Native people signed treaties, the U.S. government made promises and then broke those promises when more Indian land was needed for resources or settlement.

Native people took their grievances to the U.S. Supreme Court and the court did the right thing, Heitkamp said. “It honors the treaty rights and then Andrew Jackson said I don’t give an (expletive deleted). And that begins the trail of tears.

“That begins the distrust that indigenous people have about our justice system. And then, we move them a little further and we break another treaty and we move then a little further and we break another treaty,” she said. “When you ask, ‘why don’t Native people work with the criminal justice system?’ I say, ‘what would recommend to you that they should trust the American criminal justice system; that they were going to get justice from a system that has been rigged against them for years?’”

Heitkamp had included a provision in the original Savanna’s Act that would require police and sheriff’s departments and other local law enforcement entities to cooperate with the Department of Justice in cases involving Native American victims to be eligible for federal grants and other DOJ funding.

That provision stopped the act from being passed in the House after it was successfully approved in the Senate.

“It’s the same old story. It’s divide and conquer. So, women whose crimes were committed on the reservations – they might get some extra protection,” Heitkamp said. But women who are ignored and not heard who live in cities across this country who are indigenous – we’ll just leave them behind.

“I am sick of leaving people behind,” she said.

Heitkamp offered what she admitted were rather radical ideas to help solve the problems currently being faced my women on reservations.

You can avoid being subjected to jurisdiction in tribal courts, Heitkamp said, by not going to the reservations to commit crimes in the first place.

“We have to reunite this ideal of safety and community protection with sovereignty,” she said, “because when you separated that and you diffused responsibility, you no longer have accountability for what happens.”

FBI Must Do Its Job

Heitkamp said the FBI must be ‘the cop on the beat’ that they say they are or they must give that responsibility to someone else.

“I can tell you in North Dakota, we have FBI agents that work day and night. They don’t have enough people. It’s not like they’re not committed. It’s not that they’re not doing enough investigations,” she said. “They just can’t keep up.”

Heitkamp said it’s important to identify the tools that Native people can be provided to forge their own economic prosperity.

“The last 100 years have not been a shining example of success,” she said. “What we’ve done has failed and it continues to fail substantially.”

Heitkamp said in the years she served as North Dakota’s attorney general, from 1992 to 2000, “I thought things were horrible. I would tell you, coming back into it in 2012, they were worse.

“We have to work with tribal organizations to solve the challenges, right where they are,” she said.

The challenges posed by the federal government to Native Americans are plenty, Heitkamp said.

“Do you know what we spend in health care at community Indian services? One-third of what we spend on Medicaid recipients and then we wonder why Indian Health Services in failing,” she said. “And guess what was exempt from sequestration? Medicaid, and so you could still get your health care. Guess what wasn’t exempt from sequestration? Indian Health.

“I could go through example to example to example,” Heitkamp said. “When we think about where we are right now as a society and we think about those things which are going to improve the quality of the criminal justice system, to really make justice blind and equal for everybody, don’t forget the justice system has never been blind and it’s never been fair for everyone. The greatest victims, in my opinion, of a failed justice system have been indigenous people in this country.”