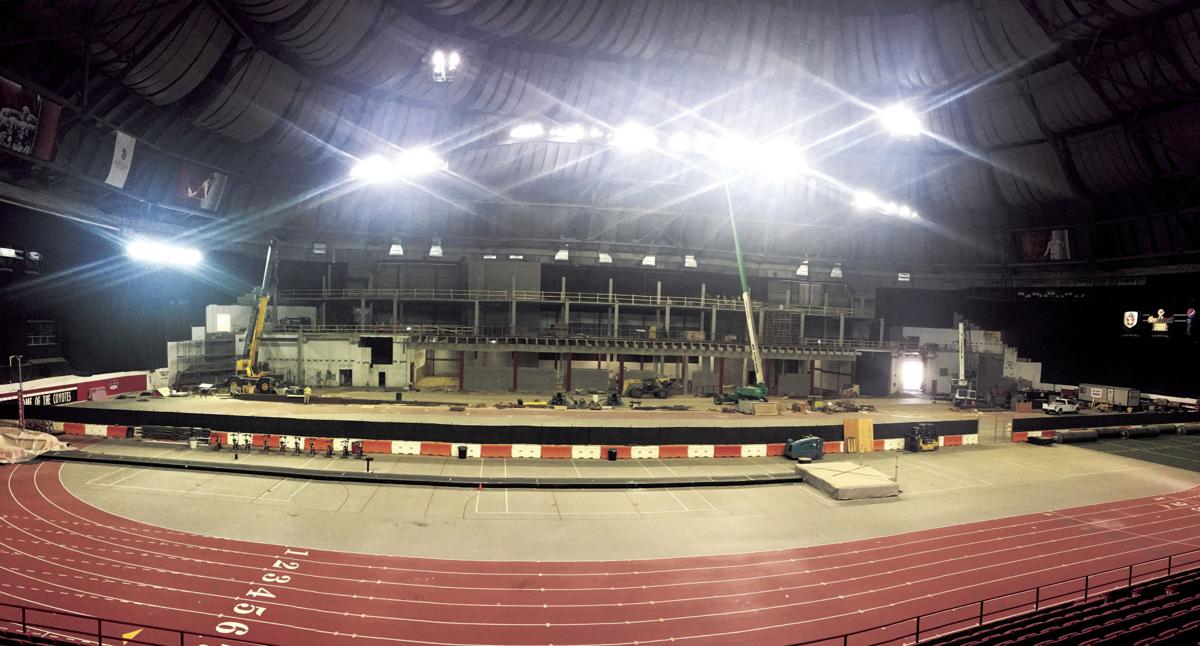 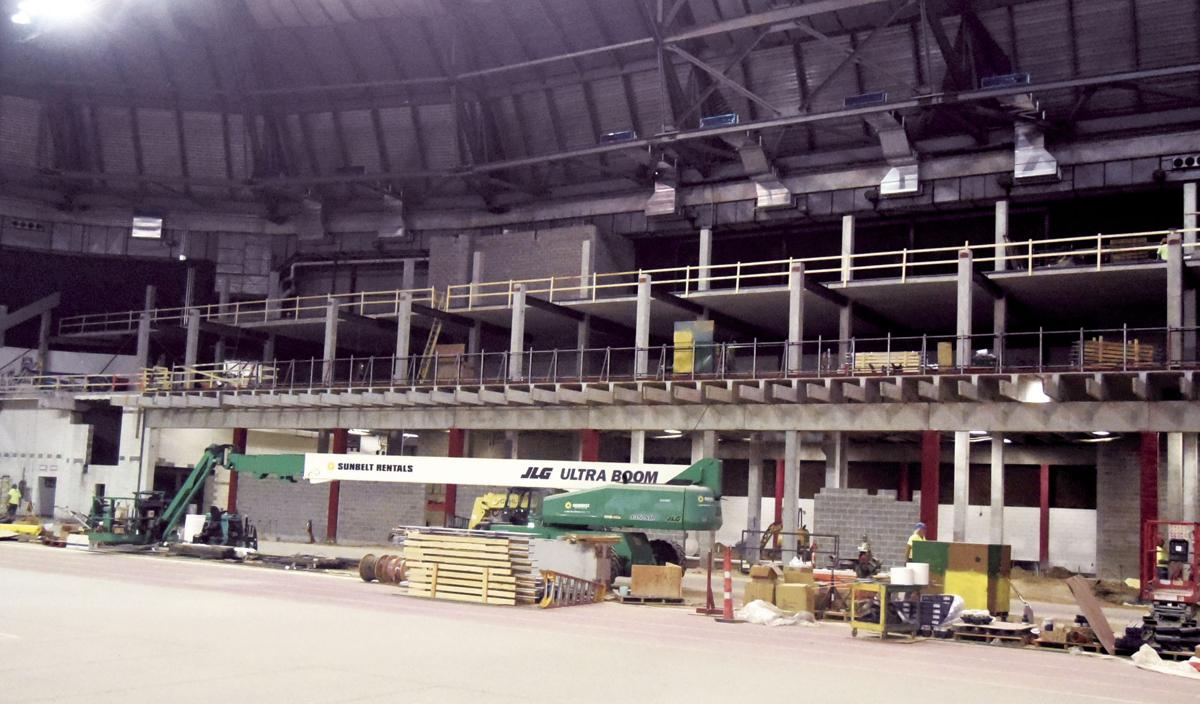 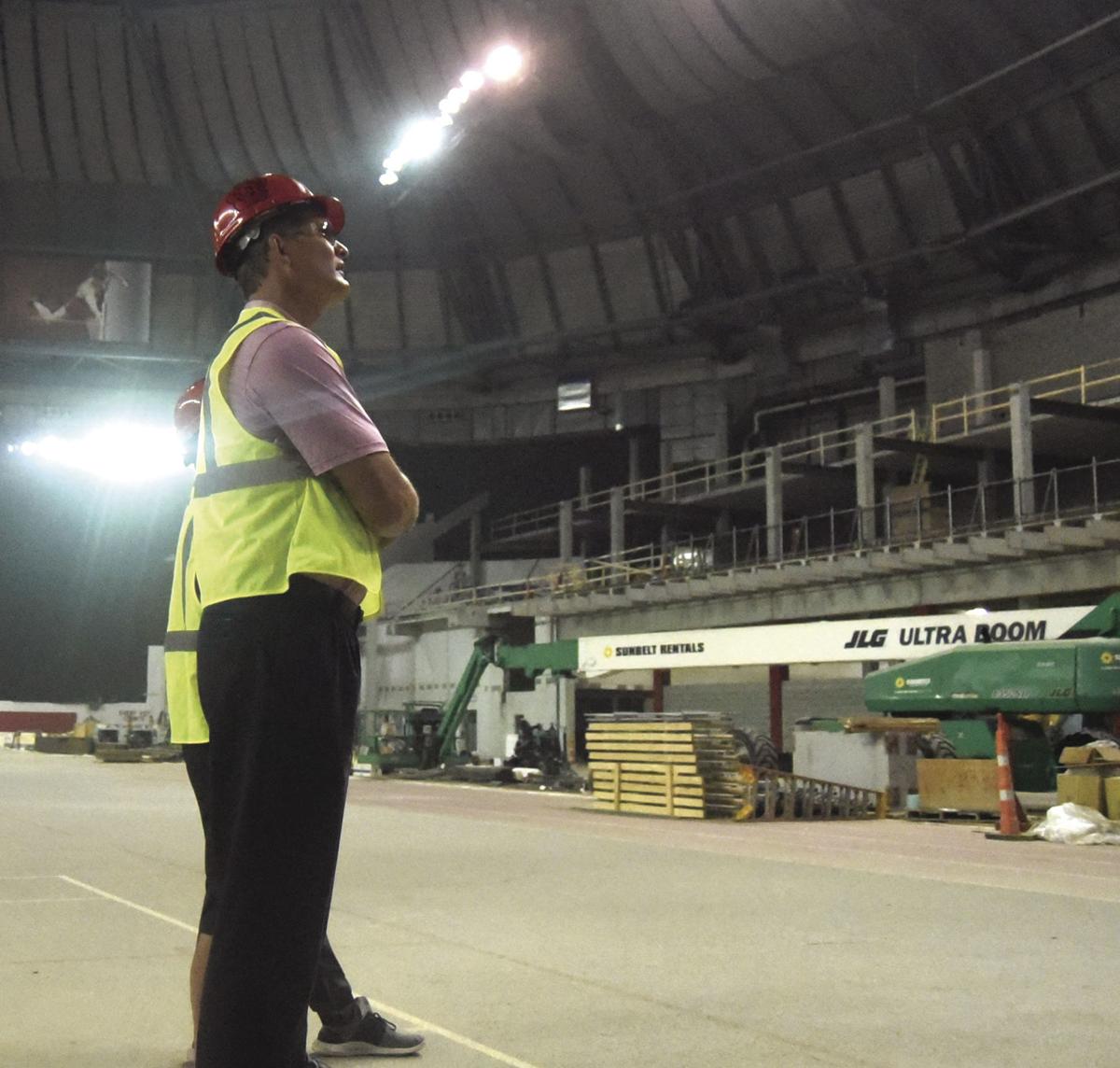 University of South Dakota athletic director David Herbster looks over the construction work Thursday at the DakotaDome in Vermillion. The work is part of a two-phase, $26.3 million project to the west side of the dome.

University of South Dakota athletic director David Herbster looks over the construction work Thursday at the DakotaDome in Vermillion. The work is part of a two-phase, $26.3 million project to the west side of the dome.

DakotaDome, he couldn’t help but think about two things.

The past and the future.

Work continues on renovations to the west side of the DakotaDome in Vermillion.

“It’s a different-looking campus than it was in 2007 when I got here,” the University of South

He’s got a point.

facility projects that USD has undertaken in the past decade.

Among them: A basketball/volleyball arena, an outdoor track complex, a new turfed soccer

complex and an outdoor football practice field. And that’s not even including the new academic

“The campus has grown up,” Herbster said. “The facilities are starting to match our position as

a flagship university and a Division I school.”

Interior work inside the DakotaDome marks the second phase of a $26.3 million project: First

was a $2.1 million football practice field (which is complete) and now comes the $24.2 million

construction on the dome’s west end.

Work began inside the dome in February and the project is expected to take 18 months, and

the goal is to have everything ready for the 2020 football season.

The project is essentially broken down into four tiers:

* The level above that will feature 10 suites, 15 loge boxes, all with premium seating

* The third level would be the concourse level, with permanent seating, restrooms,

Of course, with such a project comes headaches.

football games will be played in front of a significantly smaller fan base. The student sections

and band section will be moved to the east end, which means the DakotaDome seating

“When you’re renovating a place you’re living in, it’s going to be uncomfortable,” Herbster said.

away its seven state football championship games to Brookings this November.

In USD’s case, though, it was able to ensure that none of its 2019 home games were moved

from the DakotaDome, and Herbster said the hope is that fans sitting on the east end will be

“When you can sit in your seat and look over and see progress, you can see the future,” he

To help aid in the inconveniences of certain teams being misplaced during the construction,

USD leased a building along the Highway 50 bypass, Herbster said.

equipment for diving, a throws cage for track, a 30-yard roll of turf and storage.

“It’s certainly not ideal, but we’ve been able to lessen the pain how we can,” Herbster said.

Once the west side of the DakotaDome is complete, USD’s football seating capacity will eclipse

There would be room to increase the seating capacity in the future, Herbster added, but he

said USD would prefer not to overbuild right out of the gate.

“This will give us an even more intimate environment and hopefully a loud one,” Herbster said.

“We want this to be something special.”

In Herbster’s eyes, he said the renovation project is essentially the completion of the dome,

even after four decades.

The original idea, he said, was to have identical seating on both sides, but that didn’t

materialize. And what was left were ways to utilize the west side.

Eight years ago, USD opened a new wellness center east of the dome, which gave students and

campus intramural sports a place of their own. But in order to lessen the burdens of practices

and space availability on its programs, USD had to first construct the Sanford Coyote Sports

The process began with questions about what the space on the west side could be used for,

and providing the football program with modern amenities.

“In (former president) Jim Abbott’s last year, he really wanted to make this happen, so he really

pushed this through,” Herbster said.

As he watched the construction progress on Thursday afternoon, Herbster said he remains

hopeful that the upgrades to the DakotaDome prove to be successful.

“We want to help sure that the dome is a premier facility in the region,” he said.