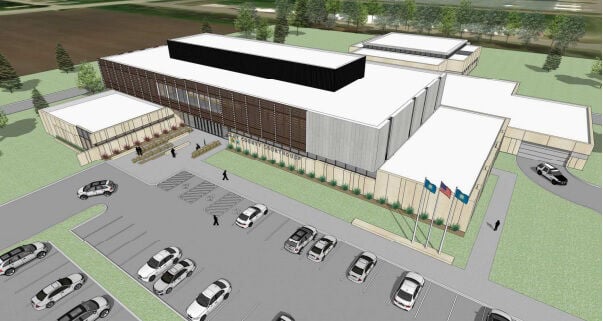 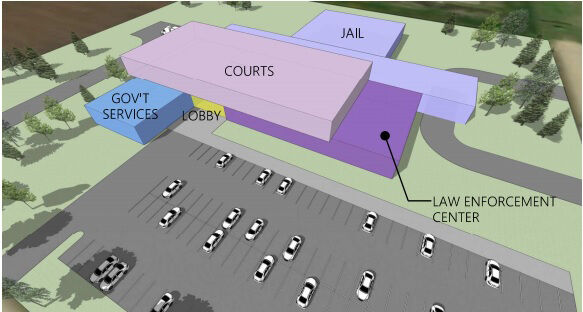 After over two hours of discussion, the Clay County Commission decided early Tuesday afternoon to issue $41 million in General Obligation Bonds to pay for the construction of a new jail, a new law enforcement center, new court space and new government services offices. Included in that total are dollars to cover land acquisition costs for the construction of new county facilities on a yet-to-be determined site.

Dollars will also be set aside to repair the courthouse building’s roof and maintain its exterior.

Clay County voters will be asked to approve the issuance of these bonds in the upcoming election on June 8.

If the bond issue is approved, the new facilities will replace the century-old Clay County Courthouse in Vermillion. Both the courthouse and the current law enforcement center, which were constructed in 1912 and 1989, respectively, will be vacated.

Early in Tuesday’s discussion, County Commissioner Betty Smith proposed that the construction of the county’s needed new buildings and improvements to existing structures, such as the courthouse, be done in phases.

“I don’t believe that building north of town (in a new location) and abandoning the courthouse is viable politically,” she said.

In terms of efficiency, the recommendations received by the county have been correct, Smith said.

“I would like to see action on a new jail combined with a new law enforcement center as soon as possible,” Smith said. “I believe if we go to bond with a new proposal with everything up north, we will wind up with having to put a smaller proposal on the November agenda. That’s just the way it is.”

She noted that 60 percent of voters must approve the issuance of the bonds “and I don’t think we have it. That is the political reality and that is what we have to deal with.”

Smith proposed a first phase of constructing a new jail and law enforcement center at the site of the present courthouse and in time, doing what needs to be done to stabilize the courthouse, including putting on a new roof.

After that construction is complete, an addition can be built onto the courthouse for stairs, elevators, and restrooms that meet ADA requirements. Administrative staff can be moved to the old law enforcement center and other spaces in the city at that time, she said, and then attention can focus on renovating the present courthouse building.

“The advantages of phasing it this way would be, first, minimal costs of relocation,” Smith said. “It resolves the most critical part of the problem first, which are jail conditions and it makes passage of the bond issue almost certain. That is the main reason for proposing it.”

She added that Vermillion’s low-income families and individuals live close to downtown and they would face a significant disadvantage if they had to receive services at county offices located a distance away.

Smith’s proposal called for a bond issue only for a new jail, new law enforcement center and improvements to the courthouse’s roof and the issuance of more bonds in the future as the county launched other phases of construction.

Dick Strassburg, a consultant advising the county commission, noted there are significant costs involved in moving personnel to other quarters while remodeling of existing buildings takes place.

“This (the courthouse) isn’t the type of building where you can remodel part of it now and part of it later,” he said. “It is moved out, gut it, power is off, you literally gut all of the mechanical, all of the electrical, all of the ceilings come down so you can get the fire protection in, so it’s a pretty major project. There couldn’t be occupancy during that time. That’s a reality of whatever would occur.”

Strassburg also said that cost escalation has to be taken into account, leading him to suggest consideration of one of the proposals that has been offered that has approximately a $50 million price tag.

“And that $50 million would include building a jail and law enforcement center on the site that could connect to courtrooms, it would include a new roof on the courthouse?” Smith asked.

“We’ve got that included in the second phase, then,” Strasbourg said.

“It would include the cost of moving staff and building that addition for stairs, elevators and restrooms, so the only thing it wouldn’t include would be the cost of renovating the courthouse offices -- is that correct?” Smith asked.

“So it would be a $50 million bond issue that would cover a new jail and a new law enforcement center on the site, a new roof and tuck pointing on the courthouse, building an addition for stairs, elevators and restrooms and relocating, as necessary, administrative staff. Does that sound right, Dick,” Smith asked.

He agreed, cautioning that the county would have to acquire private property for this, which may increase that $50 million amount.

Smith made a motion, to begin discussion of the next steps the county should take, to seek that construction option, which would cover everything but the remodeling of government offices, which would be financed by a second, future bond issue.

Strasbourg indicated that the courthouse office remodeling could eventually cost from $5 million to $10 million by the time that phase of work was set to begin.

“My problem is that I think when you go back to the voters after they’ve already voted for $50 million, if you come back and say, ‘now we want another bond for $7.5 million or something along that line,’ they’re going to say, ‘you just got everything you needed; why do you need $7.5 million now?’ That’s my problem with it,” Commissioner Micheal Manning said. “I think if you’re going to do this, you have to do everything at once. I just don’t think you can go there in phases.

“I’ve seen phases of work done and what happens is you get the first phase done and nothing happens to the second and third,” he said. “It just doesn’t go anywhere because people aren’t willing … and I’m kind of with that, myself. If you want everything, at first you should ask for it. Now you’re coming back and going to ask for more money (for the additional phases) and going to raise my taxes again? I don’t think that’s going to happen.”

Smith agreed to amend her motion to make construction occur in one phase and to bond for up to $55 million. This would include full renovation of the courthouse.

“We’re going the wrong direction if we think people are going to support $55 million,” County Commission Chairman Travis Mockler said. “The $41 million (option of plans presented to the commission to consider) is hard enough to swallow. Now we’re going to ask them (citizens) for another 30 percent on their taxes?

“In two weeks, we’re going to have a roomful of people already complaining their taxes are too high right now,” he said. “I don’t know how we ask them for more … I would not be in favor of putting a $55 million bond on a ballot.”

Manning noted that if the commission and the public decides to construct new buildings on a different site, the county will still need the courthouse for at least three years while that construction is happening, making it important to maintain it.

It’s also important, he added, for the community to work with the county to eventually find other uses for the building should county offices move into a new, off-site structure.

“This is not an efficient place anymore for the employees,” Manning said, “and I don’t know for sure if I can sit and say ‘I want to spend $55 million.’ I’m having a tough time with that.”

“We also have to remember this courthouse isn’t just for Vermillion. It’s for all of Clay County,” Mockler said. “I’m assuming the people in Irene don’t have the connection to the courthouse the way the people of Vermillion do, but we’re going to ask them to pay for it, so we have to take that into consideration, also.”

Eventually, a vote by the commission on Smith’s motion to ask voters to approve a bond issue of up to $55 million failed. Not long after that action, commission members focused on the $41 million option that calls for constructing new buildings on a different site.

Tuesday’s decision is the latest step taken by the County Commission in a little over three years regarding these county facilities. In January 2018, the commission hired architects to various structural needs present in the courthouse. The architectural firm also reviewed challenges being faced by the Clay County Sheriff’s Department, the Vermillion Police Department, the local dispatch center and the county jail staff in the public safety center which was completed in 1989 as an addition to the courthouse.

In January of 2019, the County Commission also appointed local citizens to serve on a Clay County Courthouse, Jail, & Law Enforcement Facility Planning Committee. It received instructions from commissioners to study possible solutions to problems that have arisen within the aging courthouse and the newer Public Safety Center which is attached to the courthouse.

The planning committee analyzed a March 2018 report from architects and consultants that also included a study of the county jail done by consultants with expertise in correctional facilities.

In August 2019, the County Commission agreed that efforts should begin to construct a new government services center to replace the courthouse. Plans to hold public meetings throughout the county the following year were stymied, however, by the COVID-19 pandemic.

The planning committee mailed a survey to county residents in late 2020 to gather input and formulate options for upgrades or replacement of the Clay County Courthouse and Jail.