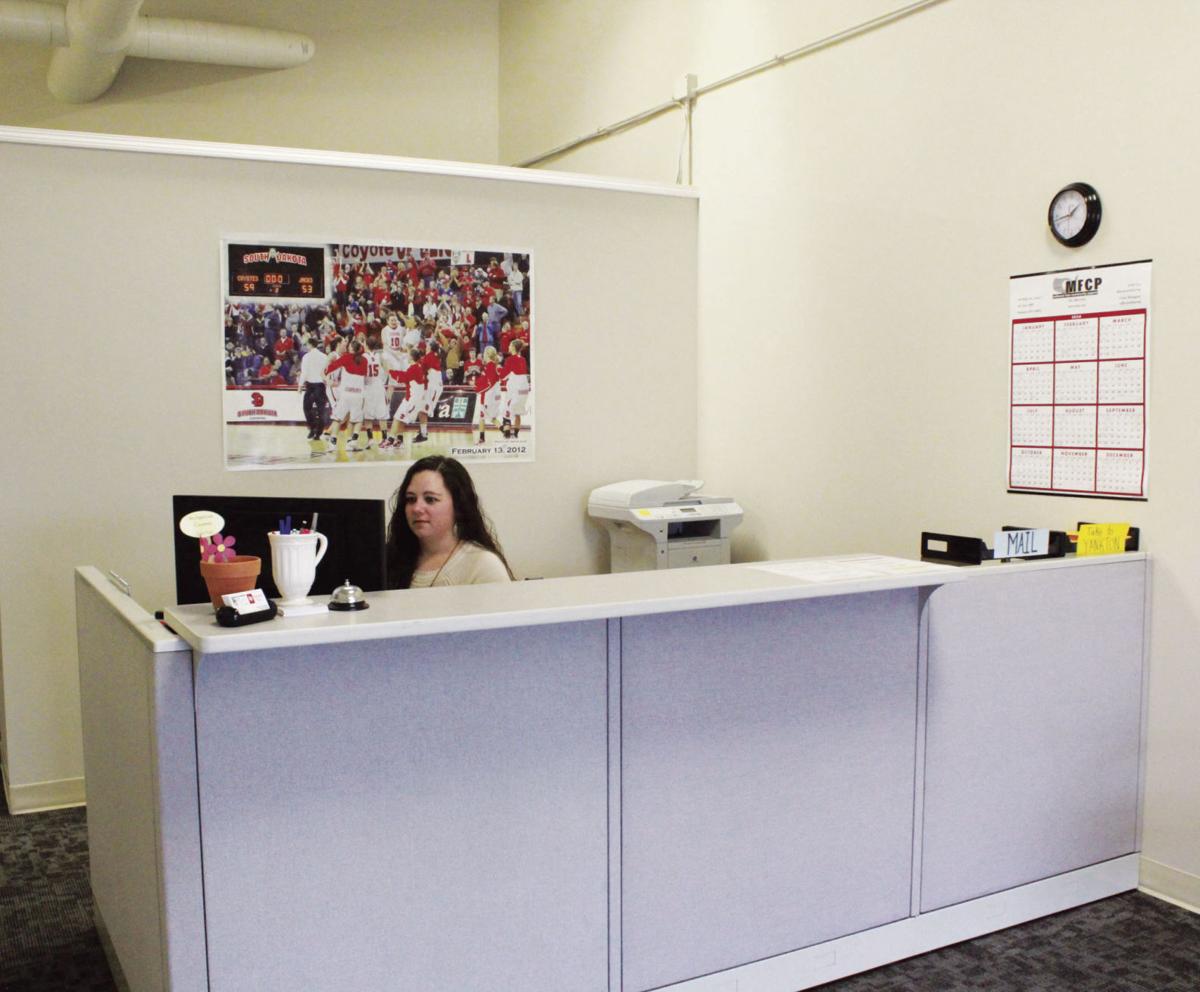 Samantha Berres, office manager of the Broadcaster Press and the Vermillion Plain Talk, is pictured in the reception area of the publications' new office at 818 Cottage Avenue. 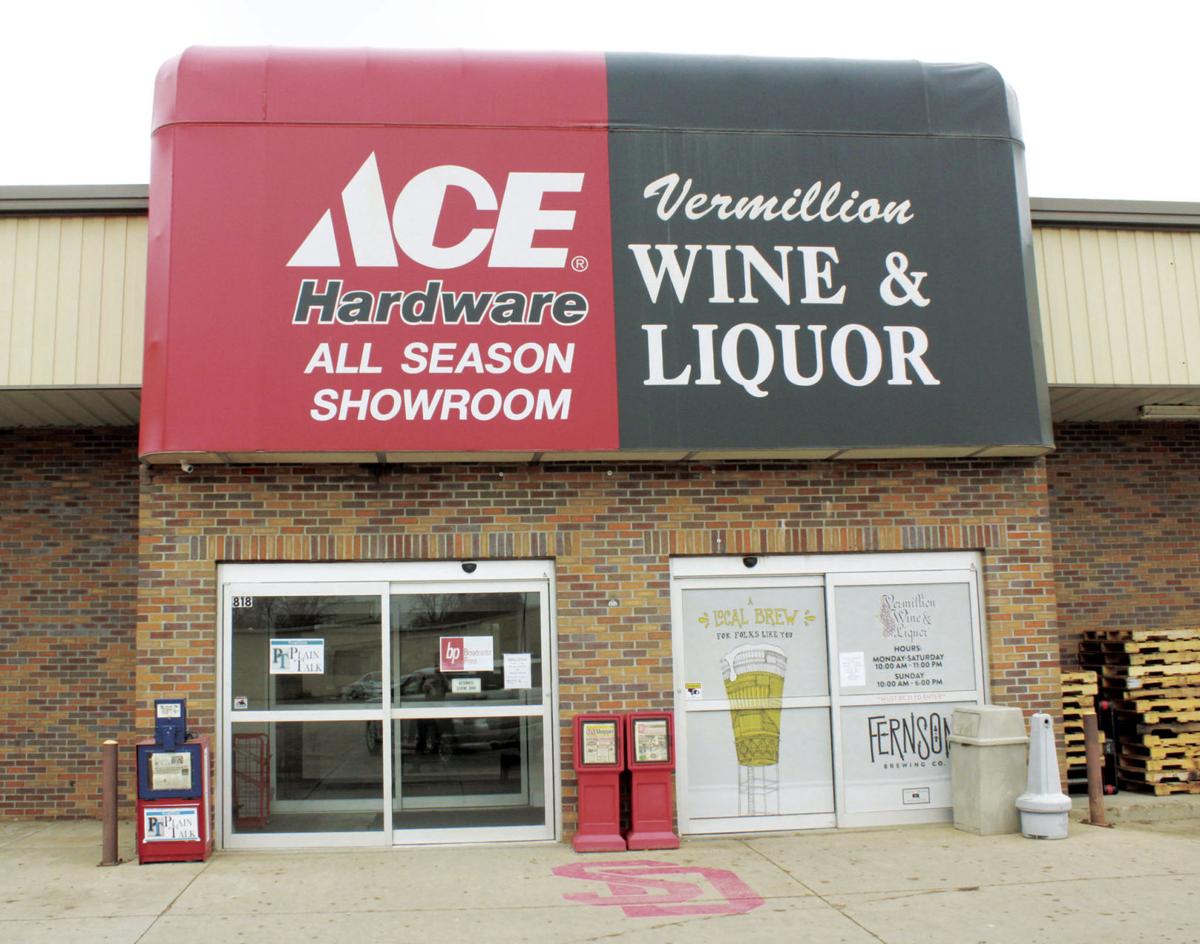 The double doors to the left, which originally were the entrance doors to Jones' Ace Hardware, are now the doors to the new Broadcaster Press and Vermillion Plain Talk office at 818 Cottage Avenue.

Samantha Berres, office manager of the Broadcaster Press and the Vermillion Plain Talk, is pictured in the reception area of the publications' new office at 818 Cottage Avenue.

The double doors to the left, which originally were the entrance doors to Jones' Ace Hardware, are now the doors to the new Broadcaster Press and Vermillion Plain Talk office at 818 Cottage Avenue.

A portion of the retail space that originally served as a part of Jones’ Ace Hardware in Vermillion when it opened in the spring of 2000 is now serving a new purpose.

That small space, which most recently was part of the hardware store’s product display area, is now the new home of the Broadcaster Press and the Vermillion Plain Talk.

Vermillion’s oldest continuously published shopper and oldest and only community newspaper moved to its new home last week at 818 Cottage Avenue as its old home – the building at 201 W. Cherry Street – is being prepared for demolition.

The aging building, which had served as the home of the Broadcaster Press and the Plain Talk since the early 1980s, was purchased late last year by Vermillion Ford, its next door neighbor at 101 W. Cherry Street.

The long-time local auto dealer is removing the Broadcaster Press and Plain Talk structure this week in order to expand its car lot as it prepares to continue its robust retail presence in the community.

“Anybody who has come through here, whether for service for their autos or whatever, can see that we have very limited space right now,” said Donny Stewart of Vermillion Ford. “Things are getting a little tight so the idea (after taking down the Broadcaster/Plain Talk building) is to get some concrete poured and try to create a little more space to park some cars.”

“We’re excited for the people at Vermillion Ford to have the opportunity to expand their lot and their inventory while providing their ongoing great service to the community,” said Gary Wood, local owner and publisher of the Broadcaster Press and the Plain Talk.

Gregg Peters, owner of the building that now houses the Ace Hardware showroom area, the new Broadcaster Press and Plain Talk offices, and the city of Vermillion’s Municipal Liquor Store, was contacted by Wood last year.

“He contacted me to find out if I knew of anything to lease and we had actually spoken to a woman from Sioux Falls who was looking for a spot for a smoothie shop and she had come to us about that space where you guys (The Broadcaster and Plain Talk) are located now,” Peters said. “We realized that we probably had more space than what we needed for our showroom. After discussions with her, she ended up not coming to Vermillion.”

Retail space originally thought to be the new home of a smoothie shop became available as Wood began talking with Peters about a possible new home for the Broadcaster Press and the Plain Talk.

“I told Gary about some of the spaces on Cherry Street that were available and then off-handed mentioned we had this spot (for the smoothie shop) and he was excited about being in that spot,” Peters said. “That kind of started our conversation and we came up with a floor plan that would work for everybody. That’s how it all came about.”

“After working out the deal with Chuck and Donny Stewart at the Ford store we had to move quickly to find a good space,” Wood said. “We quickly found the availability of retail space to rent in this market was really tight. There were just a handful of spaces available but none of them felt quite right for us.”

“It all came together kind of quick,” Peters said. “Gary came up with a plan that he thought would work and we went from there.

The Broadcaster Press and the Vermillion Plain Talk are the latest tenants in the 9,000 square foot building Peters constructed in 2000 to house Jones’ Ace Hardware and the municipal liquor store.

“I think this is going to work out good; it’s going to bring more traffic to our store and to our area … and hopefully we get some café business from you guys since you’re right next door,” Peters said with a laugh, referring to Mr. Smith’s, a popular eating spot located in Ace Hardware. “I think it will be a win-win for everybody.

“We’ve been here going on 25 years and obviously you guys (The Broadcaster Press and Plain Talk) have been here a lot longer than that,” he said.

“It’s amazing how things just seem to fall into place when you least expect it,” said Wood. “While talking to Gregg I was also looking at a downtown location. That space was nice but it just didn’t offer the same things this location did. We’re in a brand new office space and excited about the visibility of our new location. I believe it will be beneficial to us as well as Gregg’s stores. The renewed partnerships created with both the Stewarts of Vermillion Ford and the Peters of Ace Hardware present some exciting opportunities for all concerned.”

The Plain Talk is the only newspaper in continuous publication in Vermillion, providing original, local content since 1894 and the Broadcaster Press is the only continuously published Vermillion area shopper, in business since 1934.

Much of Vermillion Ford’s inventory is the auto manufacturer’s popular lines of pickups and the local business’s lot has run out of room. For some time now, pickups and other vehicles have had to be located across the street, in the parking lot of the Clay County Fairgrounds.

“We’ve been fortunate enough to be able to use that space over there,” Stewart said. “We’re in a trend to grow the business and we needed some extra space.

“Especially in the Midwest, everybody here likes their pickups and they’re some of the safest and best-built vehicles on the road today,” he said. “They’re getting better gas mileage than they used to.”

Stewart added that the expansion of the Vermillion Ford lot is coming at a time of change for the business.

“I think the future of vehicles is going to change here in the next 10 years,” he said, “including all of the electrification in which Ford is very committed to in terms of electric vehicles and hybrids. We’re going to be putting in an electric charging station out here. We’re just trying to keep the business growing.”

Stewart said Tuesday that he believed demolition of the former Broadcaster/Plain Talk building would take place later in the week.

“We’re just working to make sure that we have all of the permits and the power shut off, the gas shut off and the plan is mid-week to start demolishing the building,” he said.

The expansion of the former Broadcaster/Plain Talk site will provide a significant expansion to Vermillion Ford’s lot.

“It will be close to not quite doubling the size of our lot,” Stewart said. “We’re going to utilize the front half to pour concrete and park new vehicles there and we’ll have room to expand if we need to. It will sure help having all of the vehicles on a concrete pad. It will be real nice.”

“Don’t hesitate to stop by the new office at 818 Cottage and say hi,” Wood said.