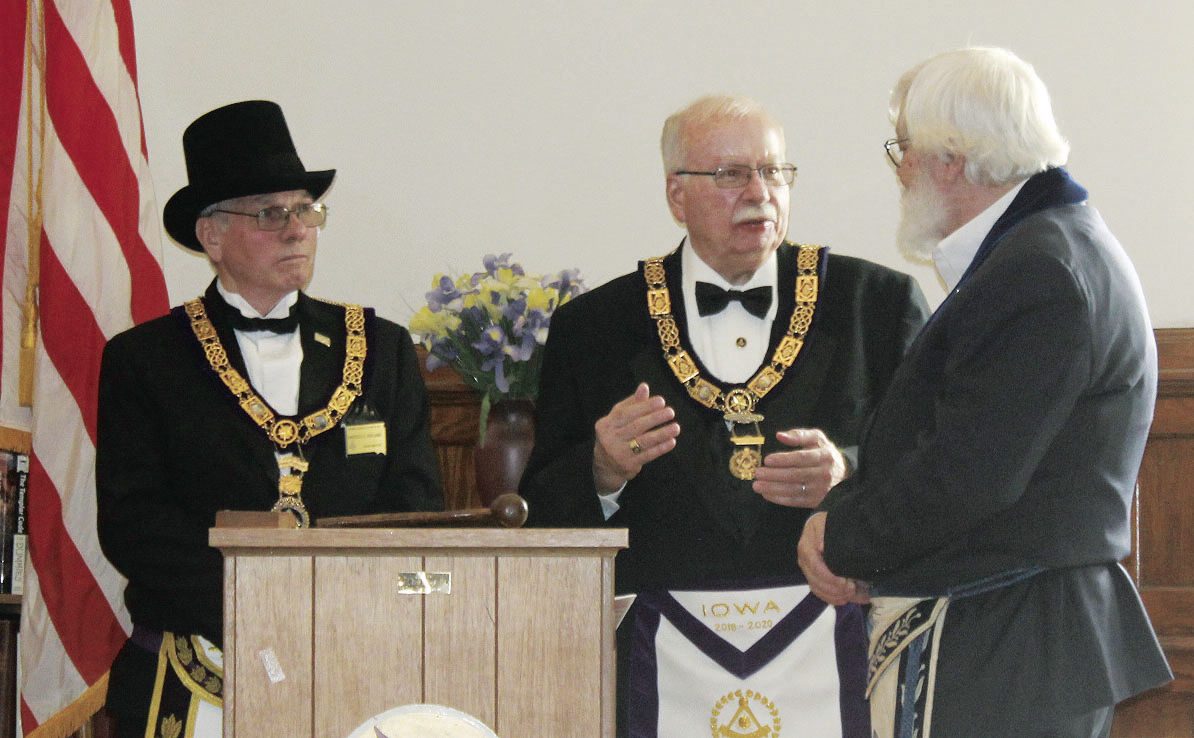 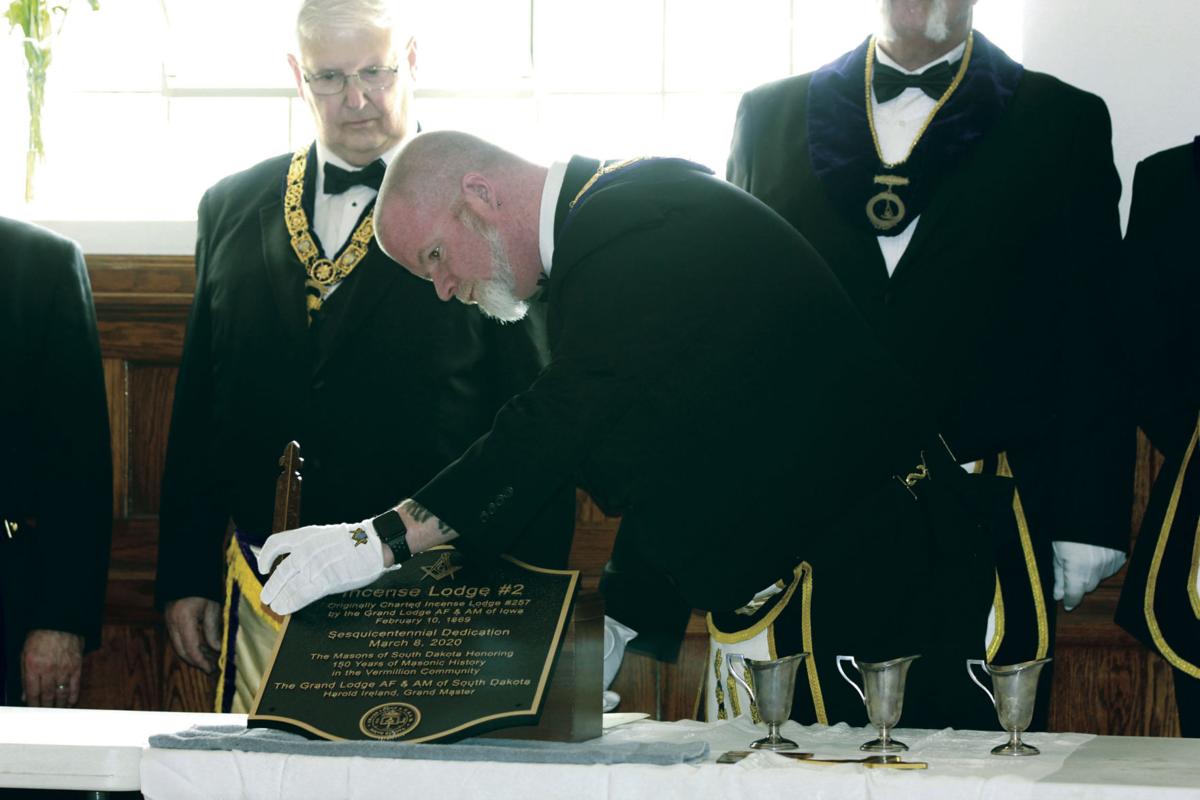 Dan Nace, Sioux Falls, Junior Grand Warden of the Masons of South Dakota, takes part Sunday in the rededication ceremony to mark the 150th year of Incense Lodge #2 in Vermillion. 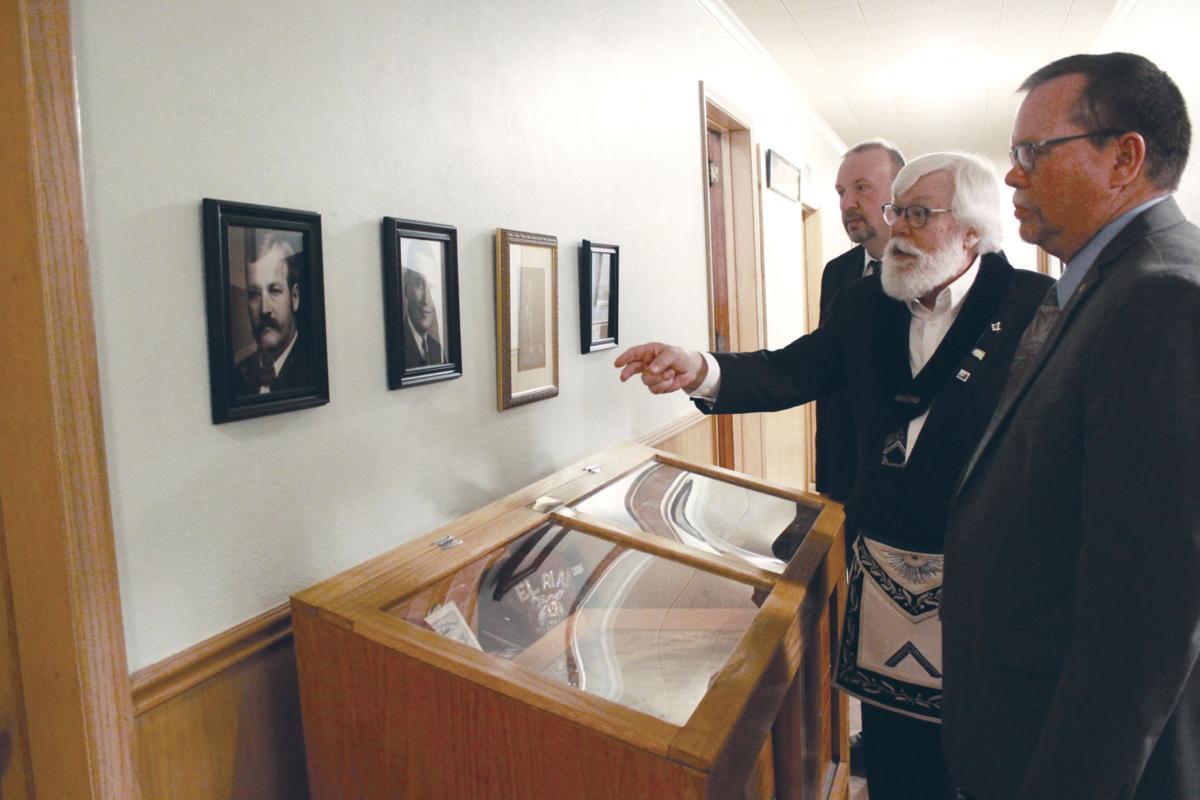 Dan Nace, Sioux Falls, Junior Grand Warden of the Masons of South Dakota, takes part Sunday in the rededication ceremony to mark the 150th year of Incense Lodge #2 in Vermillion.

Members of the Masonic Grand Lodge of South Dakota celebrated the beginnings of the fraternal organization in Vermillion Sunday by making a bit of history of their own.

Masons performed a historic cornerstone rededication ceremony as part of the 150th anniversary celebration of the dedication of what was originally Incense Lodge #257, chartered in 1869 by the Grand Lodge of Iowa.

The ceremony was held Sunday afternoon in the Masonic Lodge in Vermillion, known as Incense Lodge #2, located at 7 West Main in the heart of the community’s downtown.

The event attracted a strong crowd made up of not only local Masons and their spouses, but also some of the organization’s regional leaders, including Grand Master Harold D. Ireland, Senior Grand Warden Jeffrey P. VanCuren and Junior Grand Warden Daniel A. Nace.

Incense Lodge #2 was named in 1875, when the Grand Lodge of Iowa gave its jurisdictional rights to the newly formed Grand Lodge of Dakota, making it the second oldest lodge in the jurisdiction, behind St. John’s Lodge in Yankton.

“As old as this lodge is, the Order of the Eastern Star has been under our roof, according to our history books, since 1898,” Sorensen said. “We have a partnership that goes back a long ways.”

Masonry, a benevolent, educational and charitable organization is the world’s oldest and largest fraternity of men dedicated to helping each other and contributes to the betterment of society.

“The Masons here in Vermillion and Clay County and in this area, in February of last year, celebrated its 150th year and it takes time to plan things and get people together,” Sorensen said. “We were established as a lodge in 1869 when Dakota Territory was here and stretched from the Missouri River all the way to Canada.

“Sometimes when there were conventions and gatherings of Masons, word would get out but the people who lived up on the Canadian border seldom made it all the way this far south simply because it was a long trip, he said.

The lodge was first known as Incense Lodge #247 under the jurisdiction of Iowa.

It became Incense Lodge #2 in 1875, when the Grand Lodge of Iowa gave its jurisdictional rights to the newly formed Grand Lodge of Dakota, making it the second oldest lodge in the jurisdiction, behind St. John’s Lodge in Yankton.

“We were established as a lodge on Feb. 10, 1869, under dispensation issued by the Grand Lodge of Iowa. The Grand Lodge had received due application as early as 1867, but it took a couple years for everything to happen,” Sorensen said.

The first communication of Iowa’s new Incense Lodge was held in a room on the second story of a building below the bluff in what’s known as Original Vermillion.

“It moved several times until finally we established our lodge in this building and then later we remodeled and added on to it,” Sorensen said.

The lodge is the home of several historic documents, including its original charter.

Sorensen noted a photograph of a partially built Clay County Courthouse and a large crowd that had gathered for the ceremony of laying the building’s cornerstone.

“The Grand Lodge of South Dakota helped handle this in 1912 at the Clay County Courthouse,” he said. “We have a very rich history and this is the latest part of our history so watch what happens.”

According to a document prepared by the Homestake Adams Research and Cultural Center in December 2017, there was Masonic activity as early as 1862 in what is now South Dakota. The first charter was issued under the jurisdiction of Iowa to a lodge in Yankton, Dakota Territory, in 1863. By 1875, there were five lodges, all in the southeastern part of the territory.

In 1875, the Iowa Grand Lodge instituted the Grand Lodge of Dakota at Vermillion. In October 1899, 10 years after statehood was granted, North Dakota and South Dakota were split into two Grand Lodges.

Freemasonry or Masonry is the oldest known men’s fraternal organization in the world, tracing its origins to associations of stone masons. The entry-level Masonic unit is the Symbolic or Blue Lodge of Ancient Free and Accepted Masons. Advancing beyond the Lodge in the York Rite are Royal Arch Masons, Royal and Select Masters, and Knights Templar.

The Scottish Rite is a different advancement track. Each unit in an area is a chartered group, approved at a higher level. Each unit has a name and a number, an officer structure, and approved procedures and rituals. There are also auxiliary groups for women, boys, and girls, known as the Order of the Eastern Star, DeMolay, and Job's Daughters, respectively.