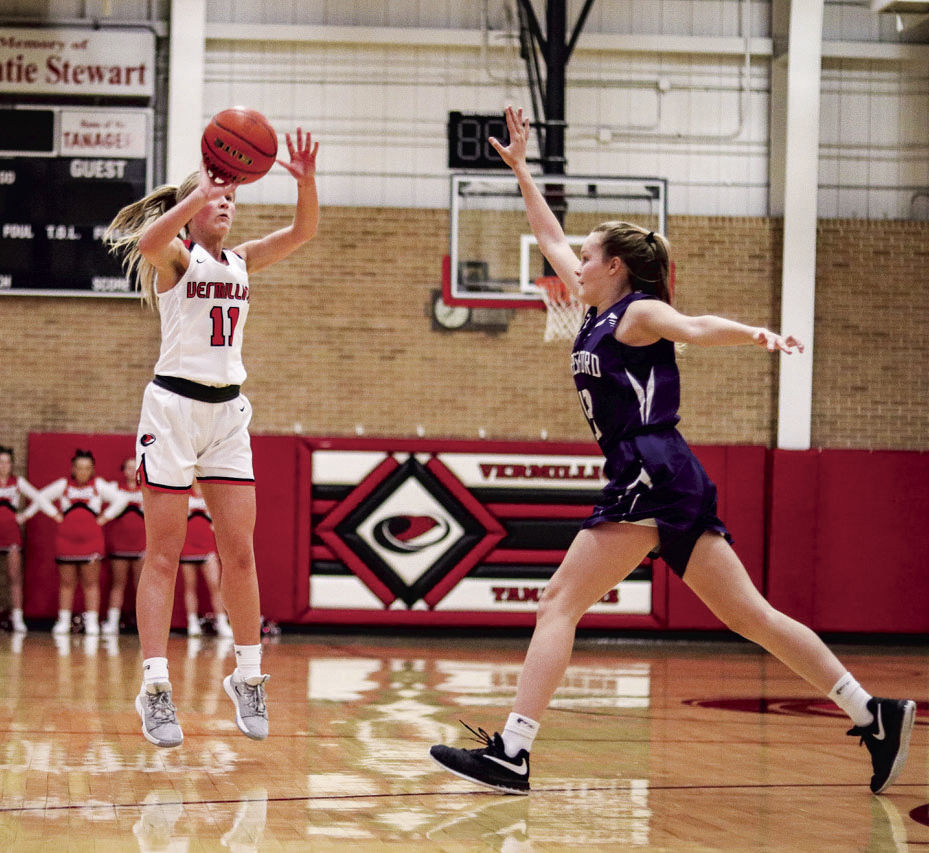 Junior Lilly Johnson drains a 3 against Beresford this past Monday in the first round of region playoffs. 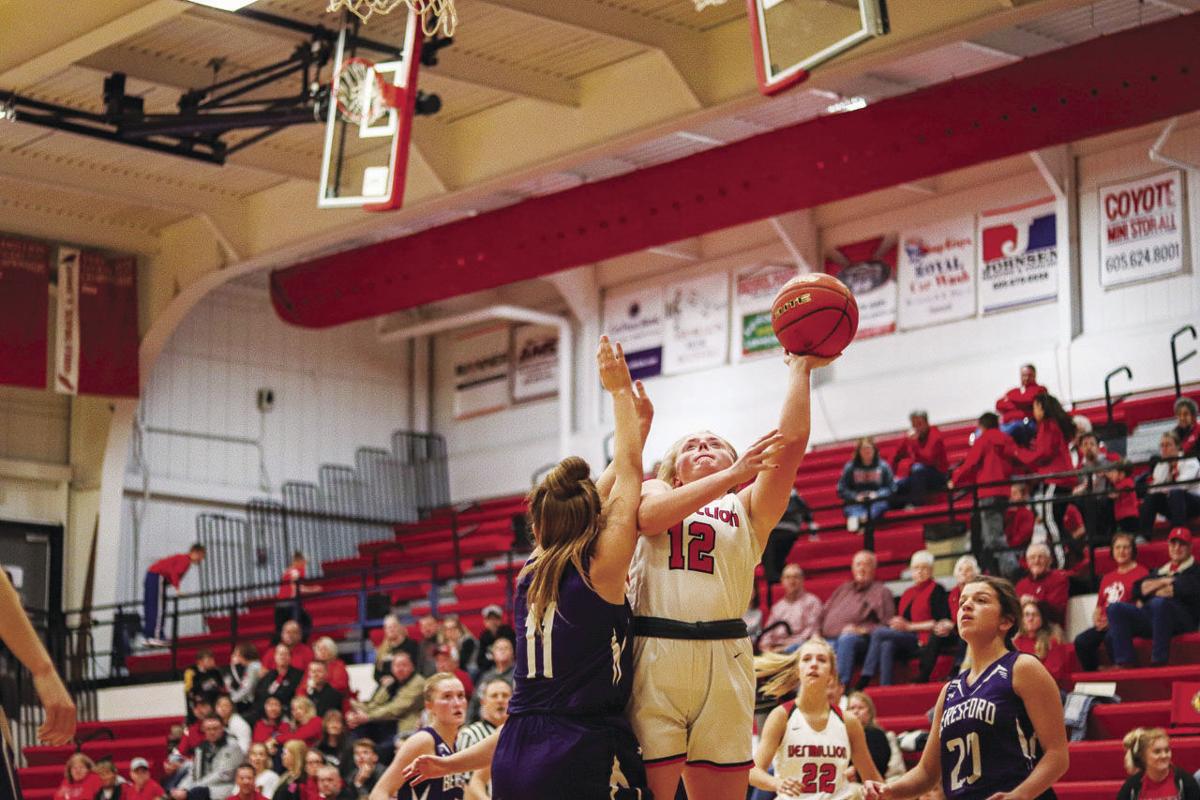 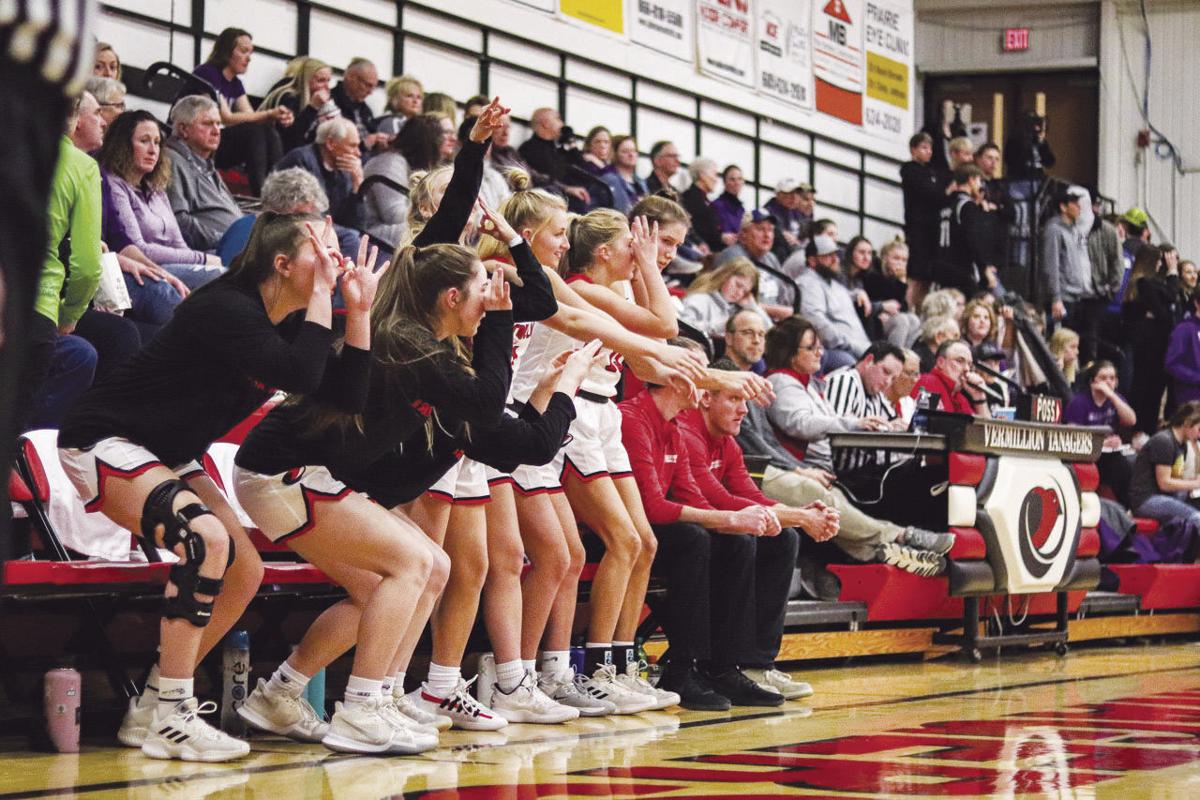 The Tanagers celebrate after one of the six 3s made in Monday's playoff game against Beresford.

Junior Lilly Johnson drains a 3 against Beresford this past Monday in the first round of region playoffs.

The Tanagers celebrate after one of the six 3s made in Monday's playoff game against Beresford.

Vermillion girls’ basketball won the first round of region playoffs this past Monday at home against Beresford 43-31.

“I was really happy with the way our kids came out ready to play right away,” said Vermillion head coach Jon Brooks. “We built a good lead early and executed very well on the defensive side of the ball.”

The Tanagers were the first on the board after two minutes of play and held their lead throughout the game. Vermillion was ahead 13-3 after the first quarter. Junior Lexi Plitzuweit had 11 of the 13 points.

The Tanagers built their lead in the second quarter, outscoring the Watchdogs by 10. Vermillion’s defensive effort also contributed to their 32-12 lead at the half.

Beresford worked to battle back in the second half. The Tanagers were held to seven in the third but still maintained a safe lead, 39-21, entering the final quarter.

Vermillion was outscored by six in the fourth while being held to four points of their own. Yet, it was not enough for a comeback by Beresford as the Tanagers advance to the second round of playoffs after the 43-31 win.

“We did a good job taking care of the ball and getting good shots,” said coach Brooks. “We were also able to create some turnovers with our pressure and turn them into points. Overall, it was a good win for us.”

Plitzuweit had a double-double with 28 points and 14 rebounds. Plitzuweit shot 50 percent from beyond the arc and also tallied six steals, one assist, and one block. Senior Lexi Saunders recorded five points, four points, three assists, and three steals.

Vermillion played in the second round this past Thursday at the 1-seed Lennox.

“Against Lennox, we will need 32 very good minutes,” said coach Brooks. “Against Beresford, we got a little sluggish in the second half which can’t happen against Lennox. In order to beat a very good team, you need to play well the whole game. That will be a big focus for us.”

The winner advances to the SoDak 16 game on Monday, one game away from making it to the state tournament next weekend.