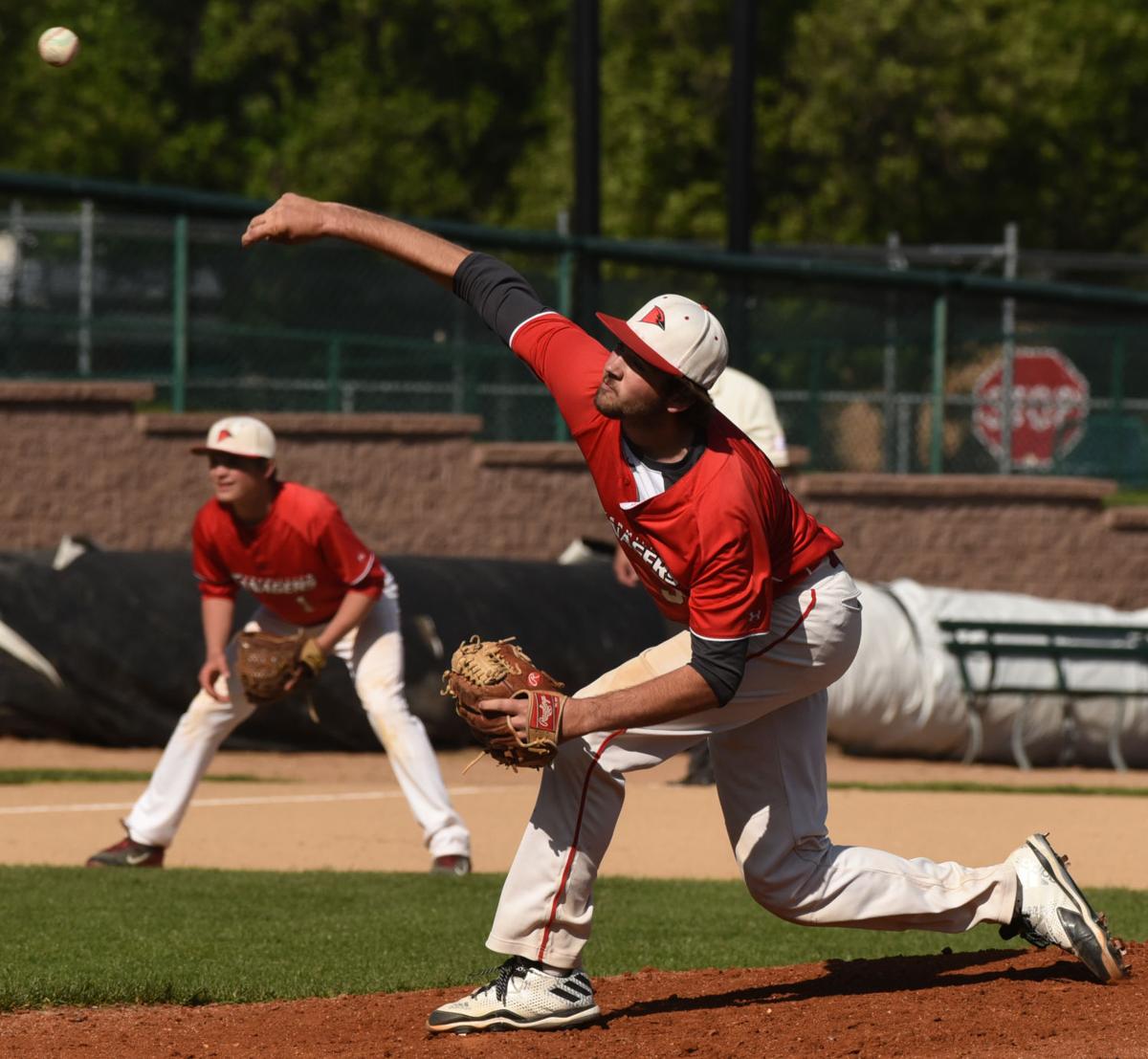 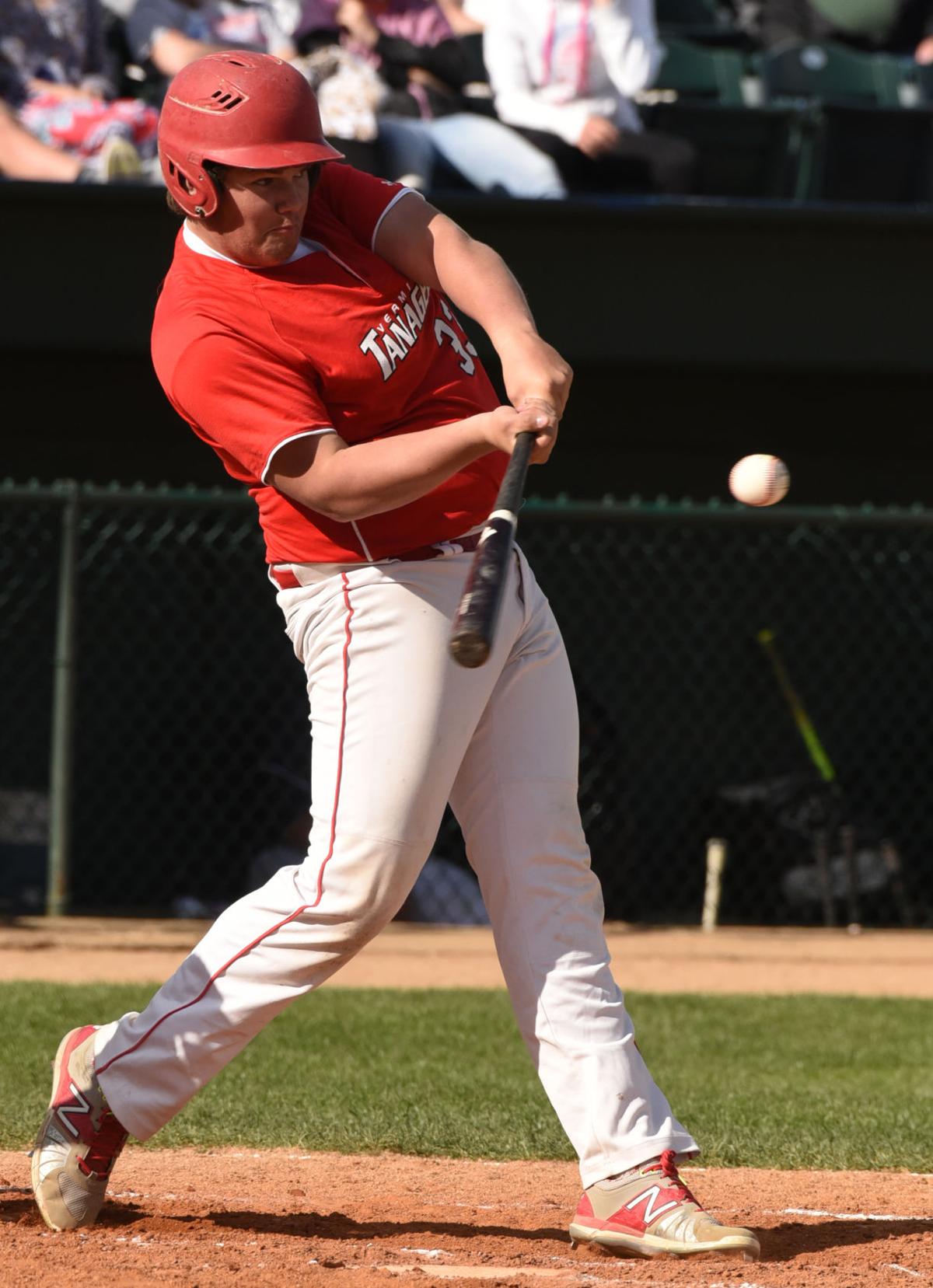 Vermillion players watch the action from the dugout during the South Dakota High School Baseball Class B championship game on Monday at Sioux Falls Stadium. 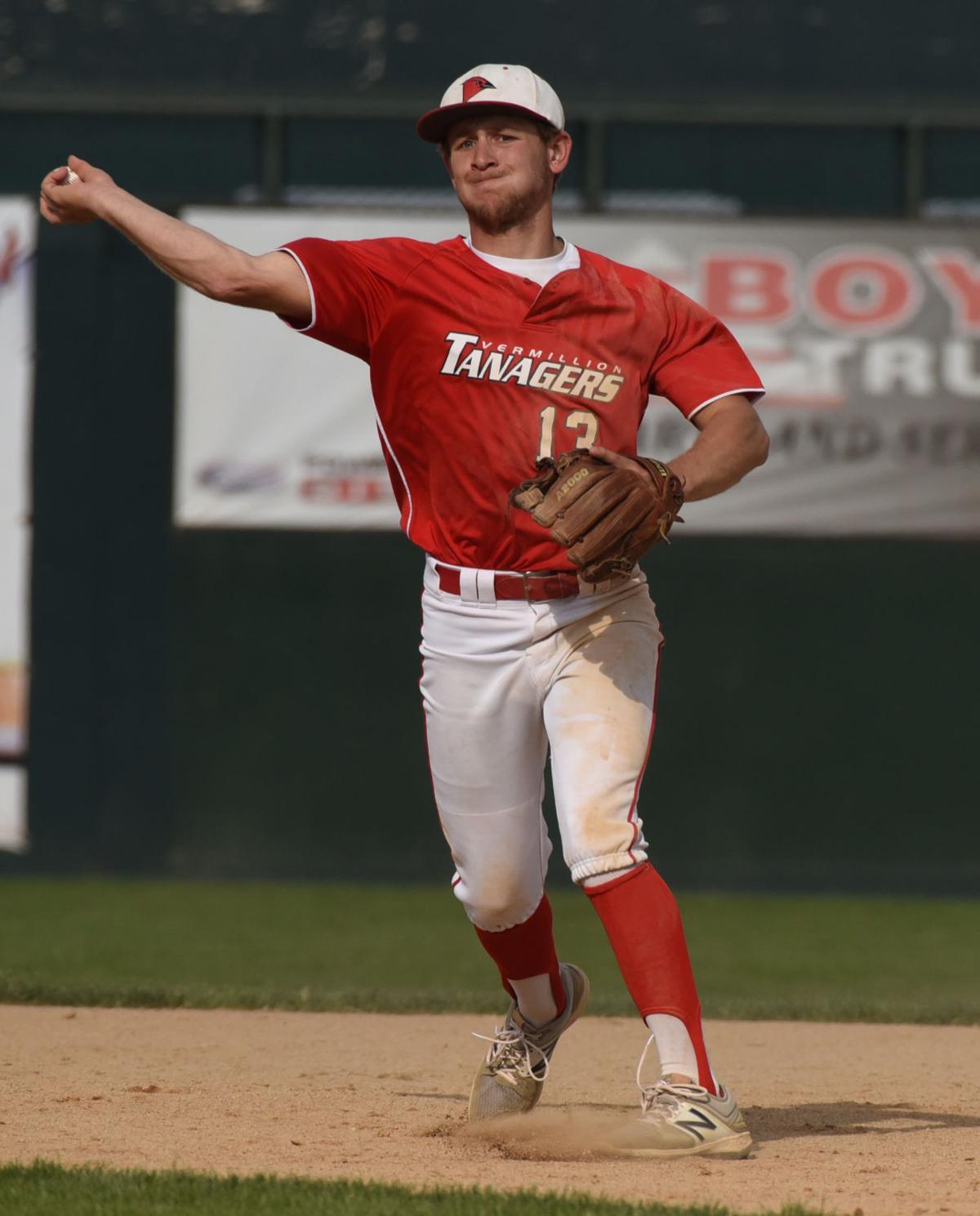 Vermillion's Carter Kratz fires the ball to first base during the South Dakota High School Baseball Class B championship game on Monday at Sioux Falls Stadium. 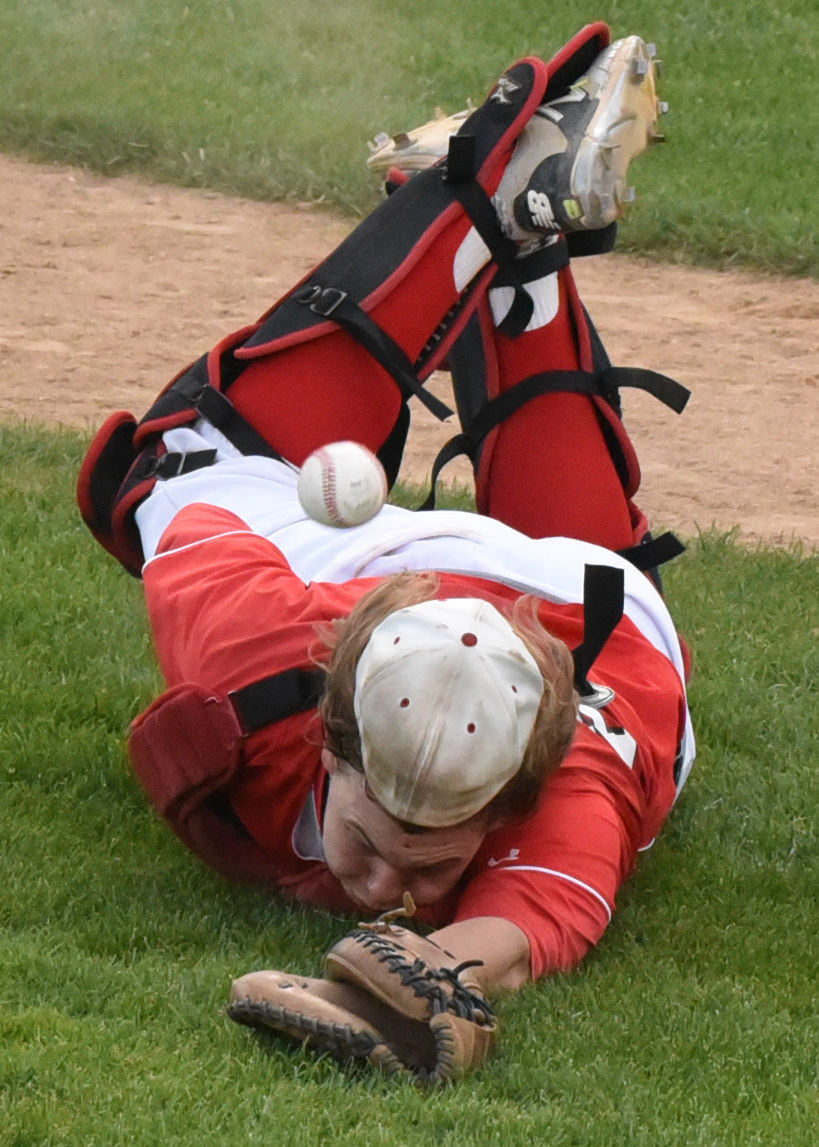 Vermillion players watch the action from the dugout during the South Dakota High School Baseball Class B championship game on Monday at Sioux Falls Stadium.

Vermillion's Carter Kratz fires the ball to first base during the South Dakota High School Baseball Class B championship game on Monday at Sioux Falls Stadium.

Sioux Falls- During the opening game of the Class B State Baseball Tournament the Vermillion Tanagers knocked off the number two seeded Platte-Geddes-Dakota Christian-White Lake-Corsica (PGDCWLC) to earn a spot in the championship where the Tanagers fell to Dell Rapids to be named state runner-up.

Billy Mount threw a complete game and added a two-run home run in the 11-1 win of the opening game against PGDCWLC. He racked up 11 strikeouts during first game of Monday’s tournament in Sioux Falls while allowing only four hits and one run.

"Billy on the mound was spectacular," said Vermillion head coach Tom Heisinger. "He was in control the whole time and not really in any pitch count trouble or anything like that."

The offense lent some help on the other end of play after struggling in the first few innings to get rolling. After just two hits in the first three innings, Vermillion finished the game with 11 runs on 12 hits.

"We had some baserunners early, but it was one of those things where it kind of snowballs when one guys gets a hit then the next, then the next and as long as we kept having baserunners we could get the ball in play and made things happen," Heisinger said.

Nate Robertson was the spark the Tanagers needed with a leadoff double in the fourth inning. Sam Ward came in as a courtesy runner and eventually scored on a wild pitch for the first run of the game. In the same inning, Riley Johnson then launched another double to drive in Riley Peters.

Peters, Trey Hage and Johnson recorded RBIs in the next inning and Gabe DeJong brought home Ward and Hunter Christopherson in the sixth.

Mound capped off the scoring with a two-run homerun to left field in the top of the seventh inning.

"It took us a couple innings to kind of get going, but we were just having a lot of fun up there and I thought our energy was awesome. We were playing for each other and hitting got contagious," Heisinger said.

PGDCWLC’s run came when a single down the first base line hit off the bag and bounced over first baseman Christopherson into the outfield allowing the runner to score.

Christopherson went 3-for-5 in the game with a double and Carter Kratz also recorded a double.

The win pitted the Tanagers against the team from Dell Rapids that beat West Central 7-2 in the first game of the day.

In the championship game Dell Rapids saw its first ever high school baseball state title as pitcher Trevor Pulscher threw a shut out 7-0 win over Vermillion.

In the second game of the day for both teams, Pulscher allowed just four hits and had four strikeouts over the Tanagers, while Dell Rapids knocked out seven hits for seven runs.

"That’s a great team over there and they executed and did things pretty well. We battled and just came up short," Heisinger said.

Christopherson suffered the loss in the final game of the season. Christopherson pitched five and one-third innings and allowed six runs on five hits and four walks, but struck out seven batters.

"He didn’t quite have his A+ stuff, but found a way to get through and battle. The last inning was pretty rough for him, but I was really proud of him because when he was younger he wouldn’t have been able to do that," Heisinger said of the senior pitcher.

Dell Rapids put up three runs in the first inning by taking advantage of an error and two consecutive walks. Seth Anderson drove in all three on a bases loaded double.

Bats went quiet for both teams until the fifth inning when Dell Rapids added another three runs on another RBI from Anderson and a two-run double from Austin Ellingson.

Kratz took the mound in the fifth to finish out the game. He allowed one run on two hits and had two strikeouts.

Pulscher and the Dell Rapids defense proved to be a tough opponent for the Tanagers. Pulscher had just four strikeouts and allowed four hits, but Vermillion struggled to get runners in scoring position.

"He was tough to pick up with his arm slot and he threw decent velocity. He just kept our guys off balance," Heisinger said. "We had a few good swings on it, but they made a lot of good play defensively, too, so you have to credit them."

Dell Rapids second baseman Carter Gullickson flashed his glove on a number of plays to rob Vermillion of some base hits and third baseman Nate McKee kept some hard hit balls from leaving the infield.

Mount, Christopherson and Peters recorded singles for the Tanagers and Robertson hit a double.

Vermillion ends the season with a 14-5 record.