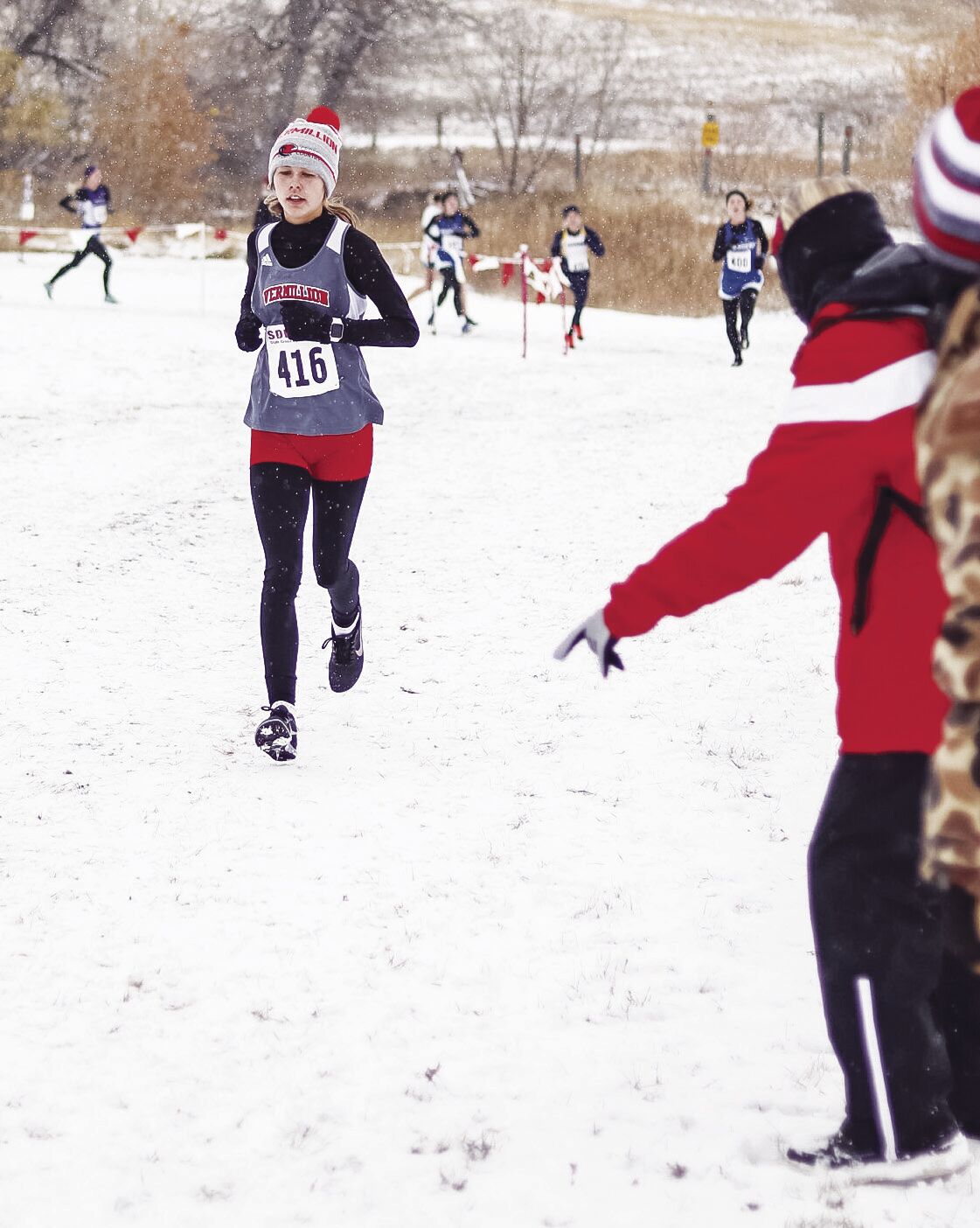 Freshman Taeli Barta runs by as head coach Kelly Fischbach cheers her on in the SD State Cross Country Meet this past Saturday in Rapid City. Barta finished 20th in 20:41.00. 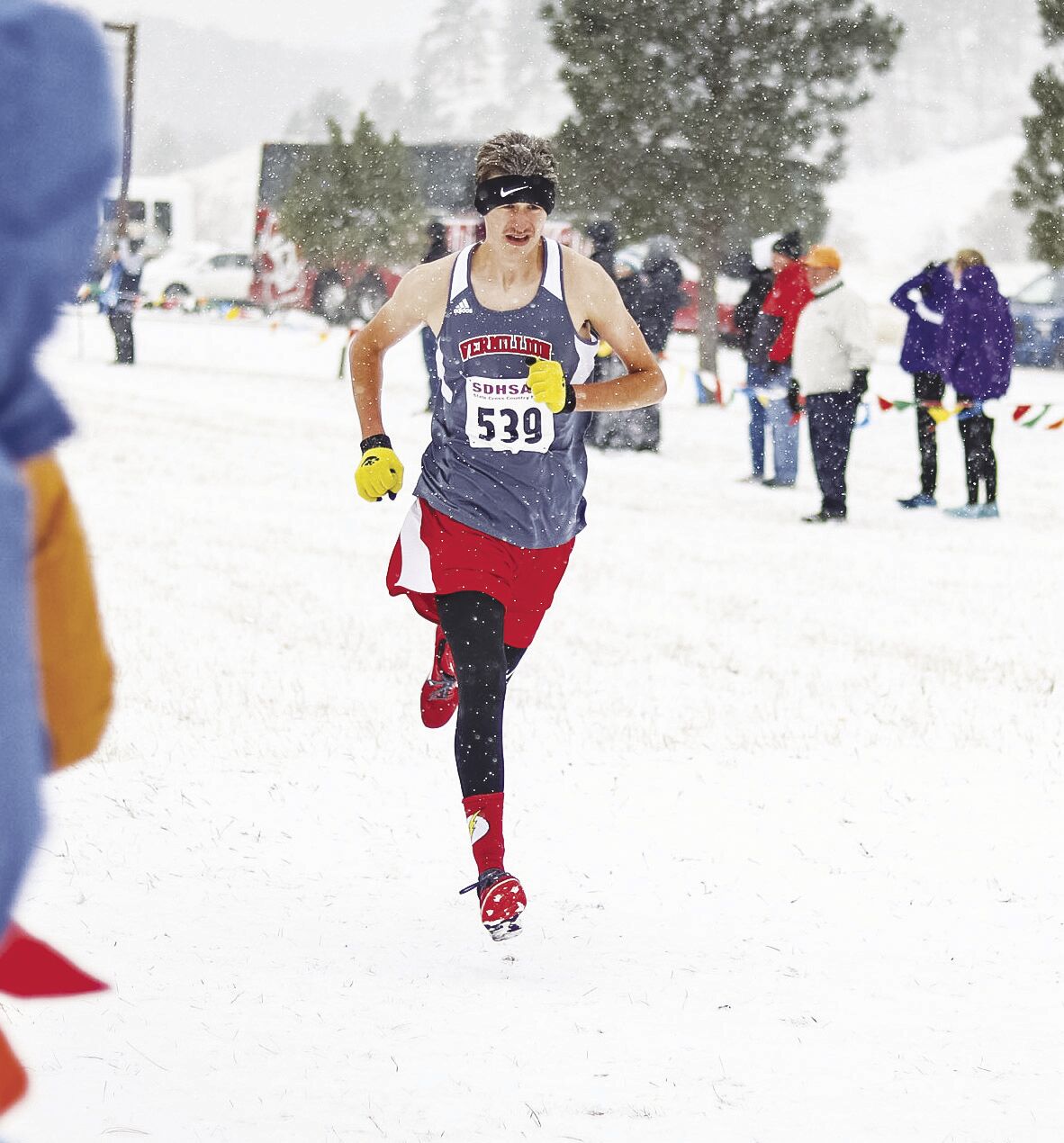 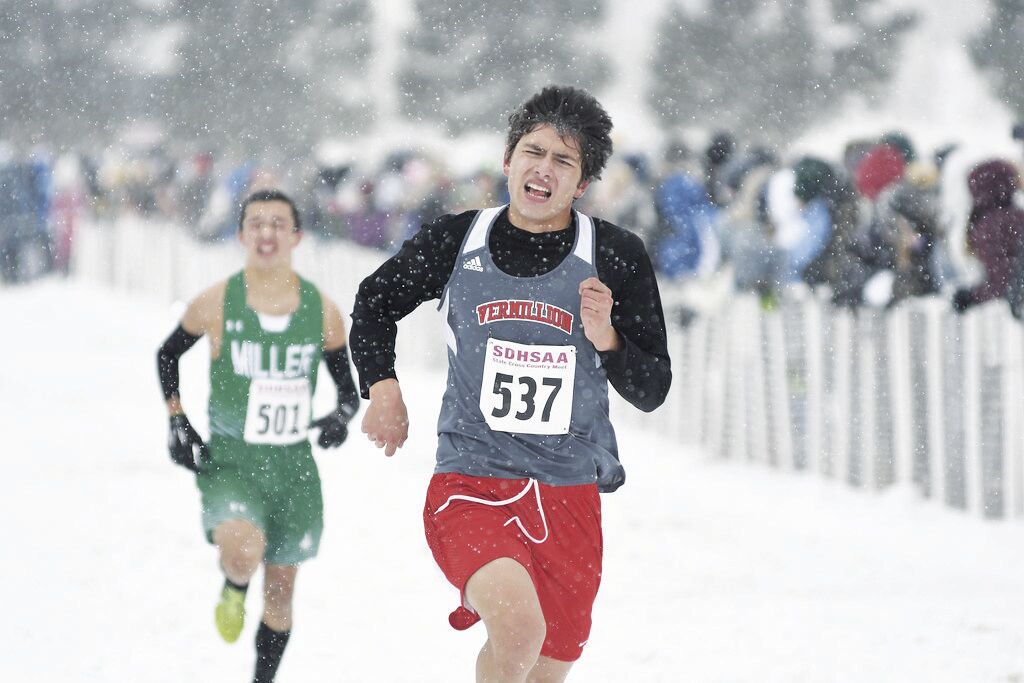 Vermillion's Jakob Dobney placed 13th in the SD State Cross Country Meet in Rapid City this past Saturday with a time of 17:42:03. 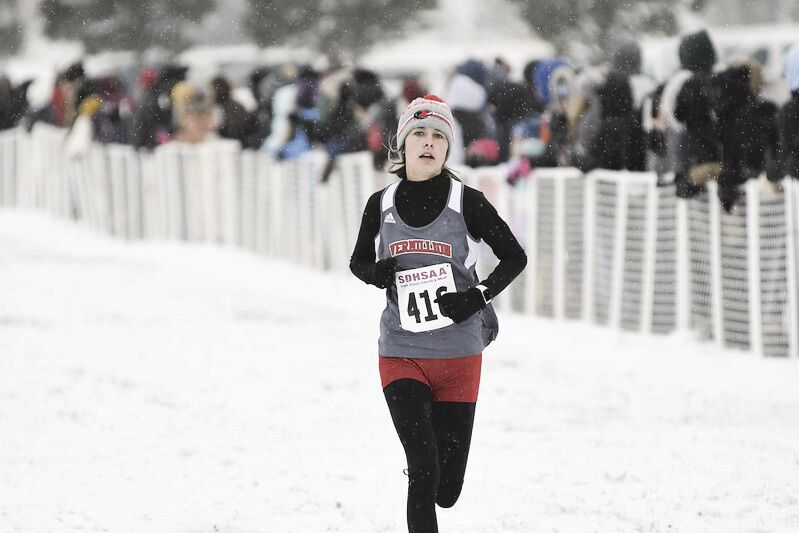 The Tanagers' Taeli Barta finished 20th among female competitors with a time of 20:41:00 at the SD State Cross Country Meet in Rapid City this past Saturday.

Freshman Taeli Barta runs by as head coach Kelly Fischbach cheers her on in the SD State Cross Country Meet this past Saturday in Rapid City. Barta finished 20th in 20:41.00.

Vermillion's Jakob Dobney placed 13th in the SD State Cross Country Meet in Rapid City this past Saturday with a time of 17:42:03.

The Tanagers' Taeli Barta finished 20th among female competitors with a time of 20:41:00 at the SD State Cross Country Meet in Rapid City this past Saturday.

The Tanager cross country team ran at the SD State Cross Country Meet in Rapid City this past Saturday. The boys finished second as a team, and freshman Taeli Barta placed top 20 in the girls’ race.

“What I'm most proud of is the way they stuck together through adversity and in less than ideal conditions,” said Vermillion head coach Kelly Fischbach. “It seems that no matter what was thrown at them, they found a way to pick each other up and do what was needed for the team to be successful.”

In the boys’ 5-kilometer run, senior Riley Ruhaak placed sixth in Class A, crossing the finish at 17:12.55.

“I’m most proud of us putting in our best effort in bringing home another state runner-up,” said Ruhaak.

“At regions, it was Riley and Emery stepping up huge to help the team win,” said coach Fischbach. “At state, Jack had his best race of the year to help us finish second. At some point, each one of them stepped up and that what made them such a tough team to beat.”

“My best highlight of the season was winning conference and having our girls' team place third there as well,” said Barta. “Placing at the state meet was also a huge accomplishment of the season.”

Vermillion loses two seniors after this season, Ruhaak and Dobney.

“It will be so hard to replace Riley and Dobs,” said coach Fischbach. “Riley has a tremendous work ethic and is such a great leader by example. He looks after and encourages the younger runners. Dobs has incredible athleticism and is great at anything he does. He is our spirit and keeps things loose, but when it is race time, he always steps up with a great performance.”

Dobney said he has developed a lot of memories since running his freshman year.

“The one that most stands out to me is when we ended up winning regions my sophomore year,” said Dobney. “I’ll admit, running is not my favorite sport, but what made it a lot better was the bond I formed with my coach and teammates. Running every day with my team made it feel like I wasn’t only running for myself, which motivated me to keep working hard.”

Ruhaak’s favorite memory in cross country as a Tanager was this state meet.

“My favorite memory was probably this year’s state,” said Ruhaak. “It was a lot of fun since we got to spend the night, and we did a lot of fun things before and after. The thing I miss the most is my teammates, being able to run every day with familiar faces and just running itself.”

Coach Fischbach said these are the most decorated male athletes she has coached at VHS.

“They both have three individual state medals, three team runner-up medals and are 4-time state qualifiers,” said coach Fischbach. “That's a pretty impressive résumé, and I can't wait to see what they decide to do in the next chapter of their athletic careers.”

The last few years have been successful for Vermillion cross country, and coach Fischbach hopes the younger athletes continue the tradition.

“It will be hard to lose the two seniors, but we return a great nucleus for next year's team,” said coach Fischbach. “Joel, Jack, Emery, Henry, Jacob and Carter will have big shoes to fill, but I think they are up to the task. They are a great group of kids, and I feel privileged to get to work with them.”

Barta also looks forward to what is to come from the Vermillion running squad.

“I can’t wait to see what our girls’ and boys’ team can bring to this coming track season and next cross country season,” said Barta. “I hope to see our girls' team head to state next year.”