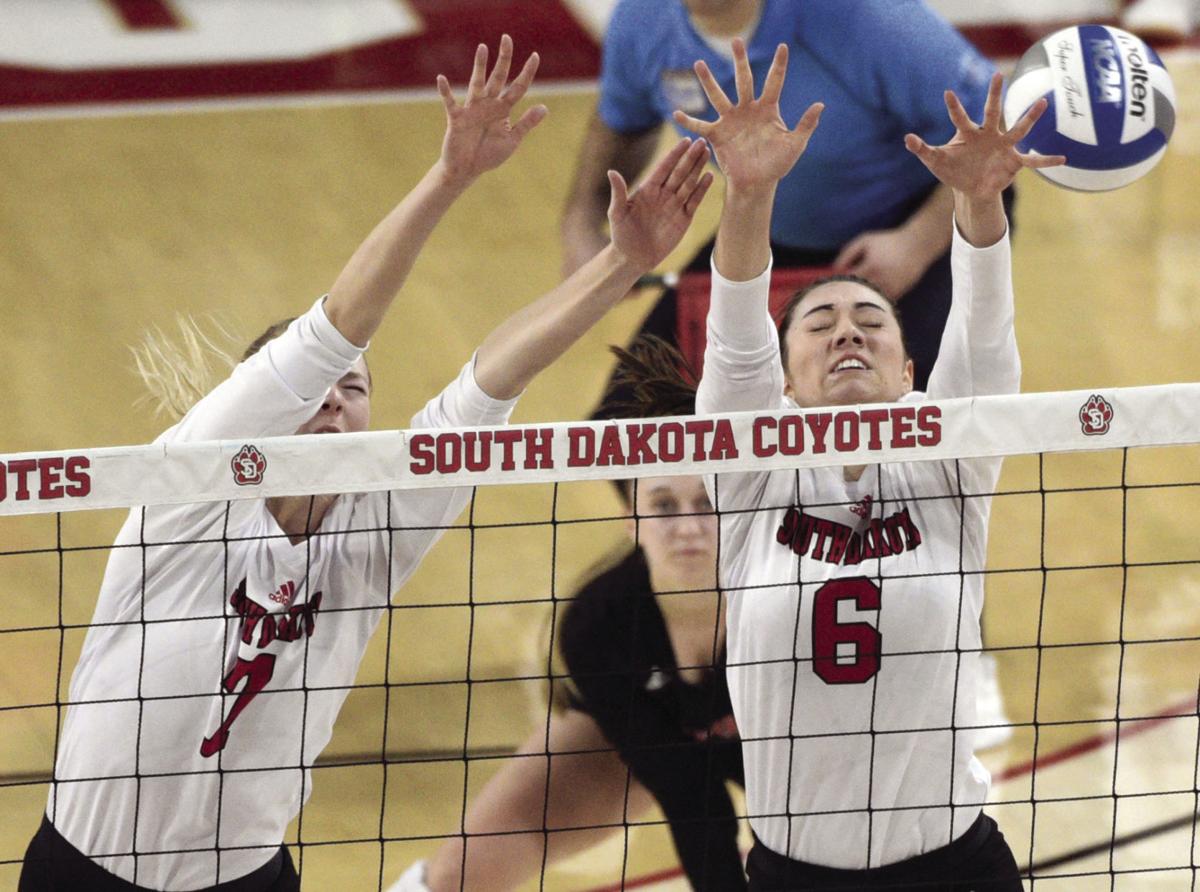 South Dakoat's Madison Harms, 7, and Elizabeth Juhnke, 6, go up to try to block an attack during the final of the National Invitational Volleyball Championship, held Tuesday at the Sanford Coyote Sports Center in Vermillion. 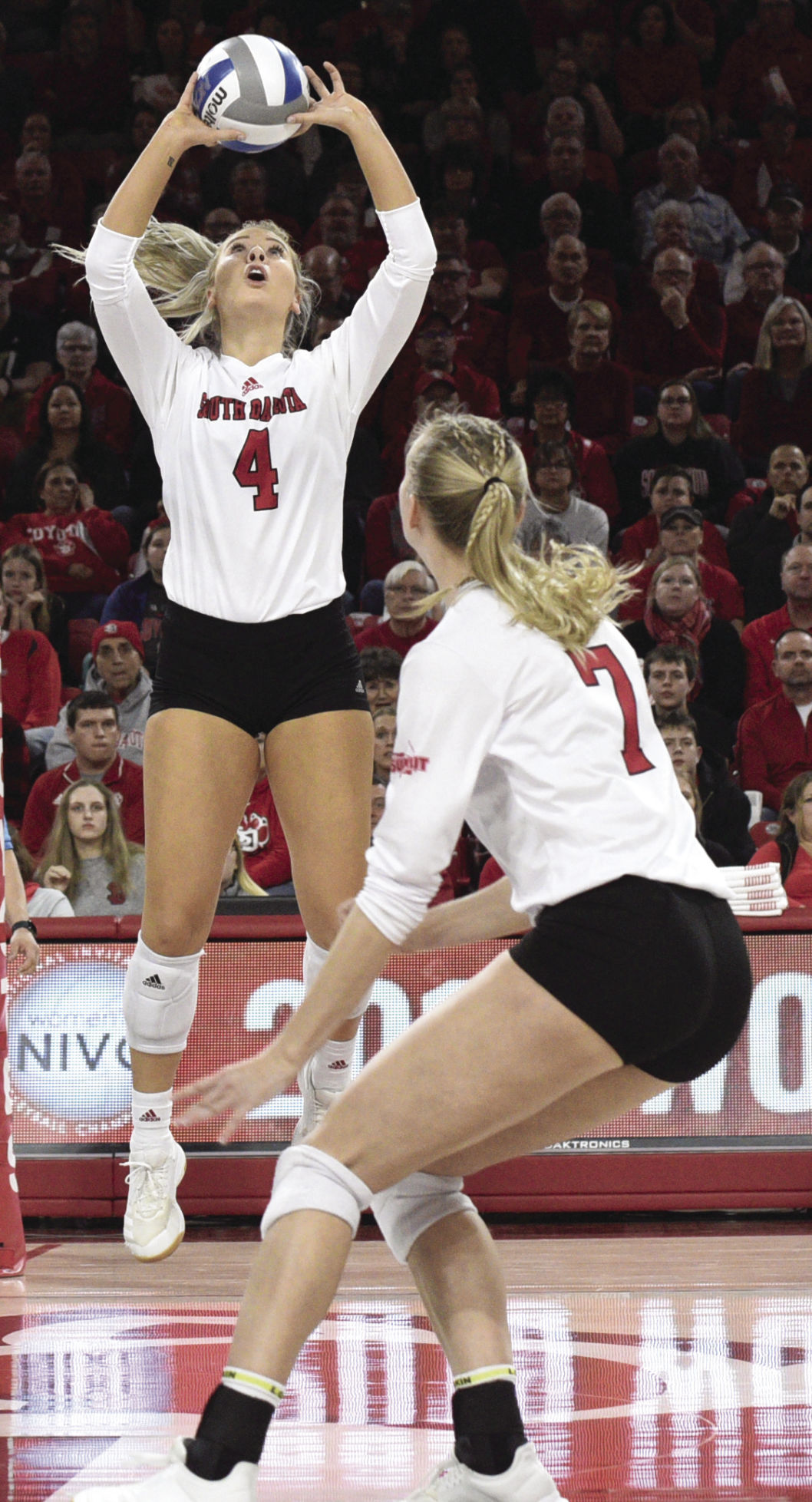 South Dakota's Madison Jurgens, 4, sets the ball as teammate Madison Harms approaches the net during the final of the National Invitational Volleyball Championship, held Tuesday at the Sanford Coyote Sports Center in Vermillion.

South Dakoat's Madison Harms, 7, and Elizabeth Juhnke, 6, go up to try to block an attack during the final of the National Invitational Volleyball Championship, held Tuesday at the Sanford Coyote Sports Center in Vermillion.

South Dakota's Madison Jurgens, 4, sets the ball as teammate Madison Harms approaches the net during the final of the National Invitational Volleyball Championship, held Tuesday at the Sanford Coyote Sports Center in Vermillion.

VERMILLION — Following a 16-0 regular season in conference play and one regular season loss at Iowa State, the Coyotes felt as though they did enough for an NCAA Tournament bid despite a semi-final loss to Omaha in the Summit League Tournament

“I don’t think we’re done. I think we’ve got a chance to play some more really good volleyball and hopefully our players can respond,” USD head coach Leanne Williamson said following the semi-final loss to Omaha.

Williamson was right, her team responded in a historic way.

The Coyotes (31-3) made a run to the National Invitational Volleyball Championship (NIVC) championship game, falling short in straight sets Tuesday night: 25-23, 25-23 and 25-17. The match was played in front of a Sanford Coyote Sports Center crowd of 2,431, a USD volleyball record.

“This was an absolutely incredible environment. We could not have asked for a better showing from our fans,” Williamson said.

“We wanted the opportunity to compete in an environment like this and for a championship, so we knew coming into it, it wasn’t going to be easy,” Georgia Tech head coach Michelle Collier said.

Georgia Tech (26-8) received a jump-start to open the match, jumping out to a 6-1 lead in the first set. Williamson called a time out and her players responded with a 5-0 run to tie the set at 6.

From there on neither side could build more than a three point advantage in the set. USD led 20-18 before the Yellow Jackets went on a 4-0 run to take a 22-20 advantage. Georgia Tech won the first set 25-23.

Similar to the first set, the Yellow Jackets jumped out to a 4-1 lead. The Coyotes rattled off three straight to tie it up, and neither side could build a lead from there until Georgia Tech held an 18-15 lead. USD called a timeout trailing 22-18. The Coyotes rallied off four of five to force a Yellow Jacket timeout leading 23-22. Mariana Brambilla finished the second set off the same way as the first, with a big kill.

“In sets one and two, we felt like we played actually at a high level,” Williamson said. “A few players here and there made the difference.”

Also in the second set, Anne Rasmussen eclipsed 2,000 digs for her career. The senior led the game through two sets with 12 digs and finished with 13 for the match.

“Overall I just loved it and to be able to leave a mark, it’s something every athlete hopes for,” Rasmussen said. “I really could not have done it without the people supporting me and making me better every day.”

From then on Georgia Tech cruised to take the third set 25-17 and the NIVC trophy.

“No team wins more than 30 matches without being a great team, and they had a great season,” Collier said.

Following the match, two Coyotes received all-tournament honors. Rasmussen and Juhnke were joined by three Georgia Tech players. The tournament Most Valuable Player is Brambilla, who finished the match with 16 kills and 12 digs. Julia Bergmann and Matti McKissock were also honored for the Yellow Jackets.

Tulsa’s Taylor Horsfall and TCU’s Katie Clark, whose teams advanced to the semifinals, were also named to the all-tournament team.

The Coyotes graduate four seniors. Rasmussen finishes her career with 2,004 career digs. Elizabeth Loschen finished with 952 kills for her career. Mehana Fonseca and Pamela Zuluaga are the other two seniors on a fairly young Coyote roster.

Elizabeth Juhnke tallied over 500 kills in her freshman season, and she tallied 94 kills throughout the tournament, five short of the tournament record.

“When I was getting recruited and they (the 2019 seniors) were very welcoming,” Juhnke said. “They were a part of the reason I wanted to come here and seeing them go, it’s hard. But I’m excited to be able to take their spot and see what I can do.”