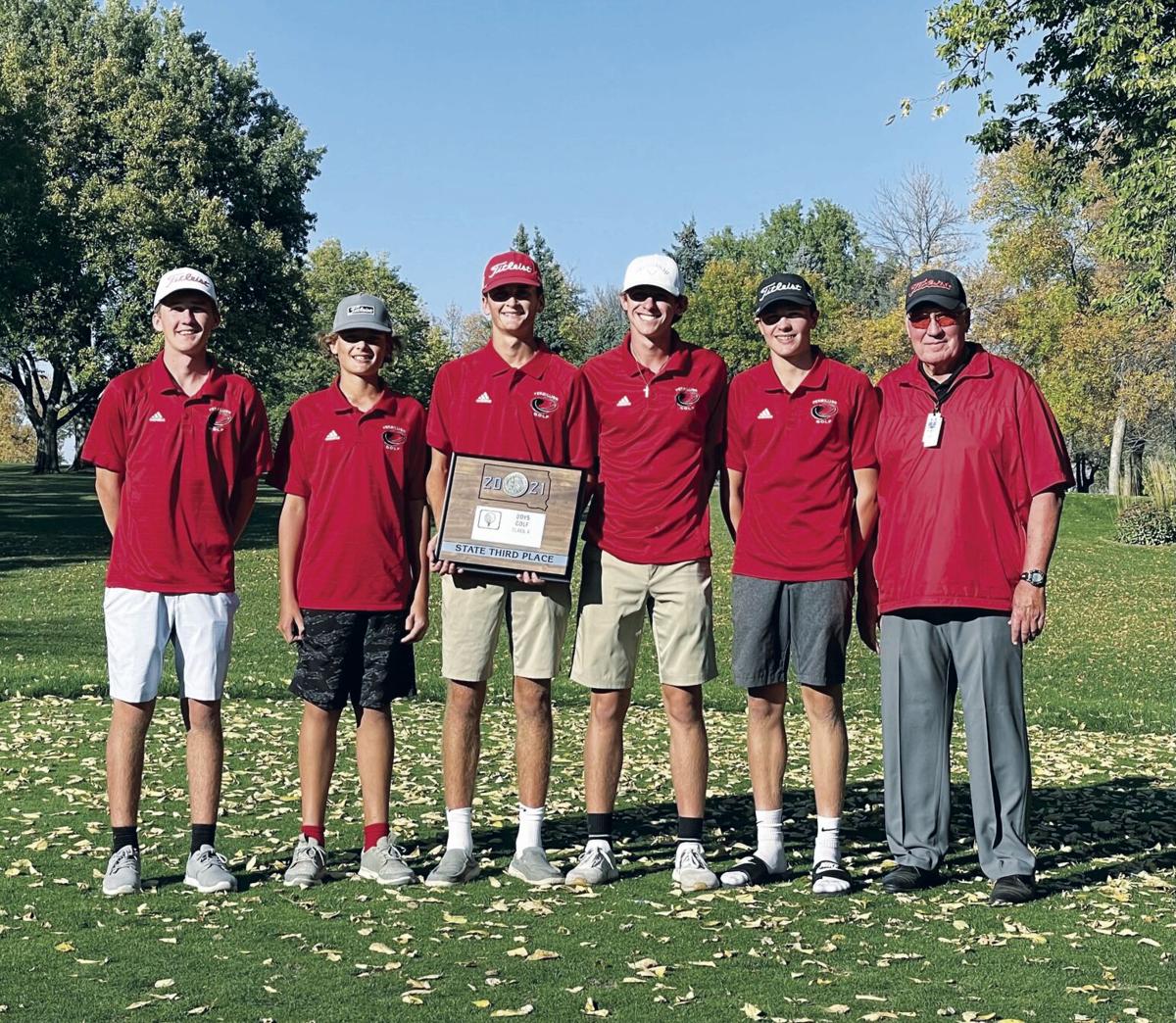 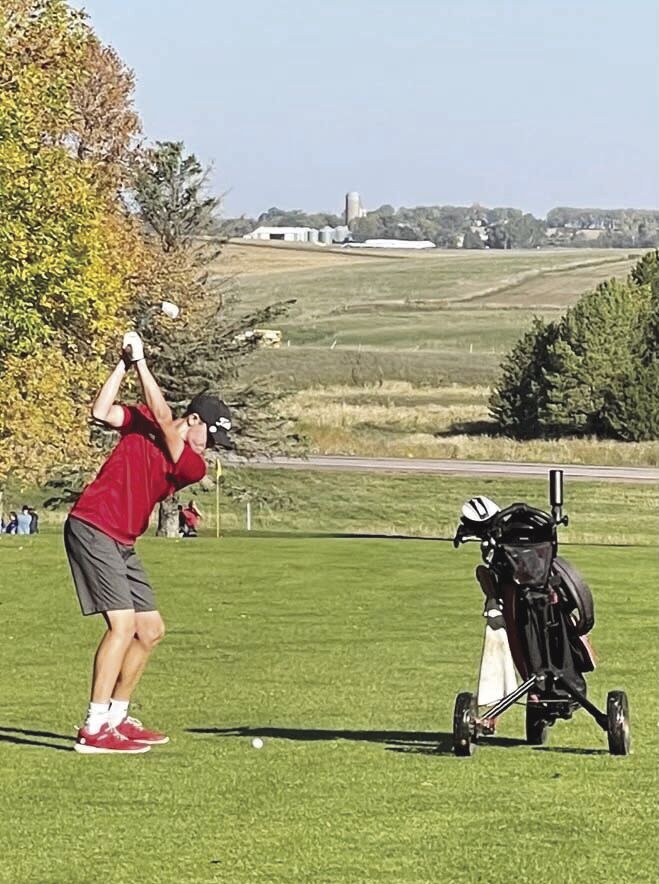 Carter Hansen is pictured as he is about to send his drive down the fairway. 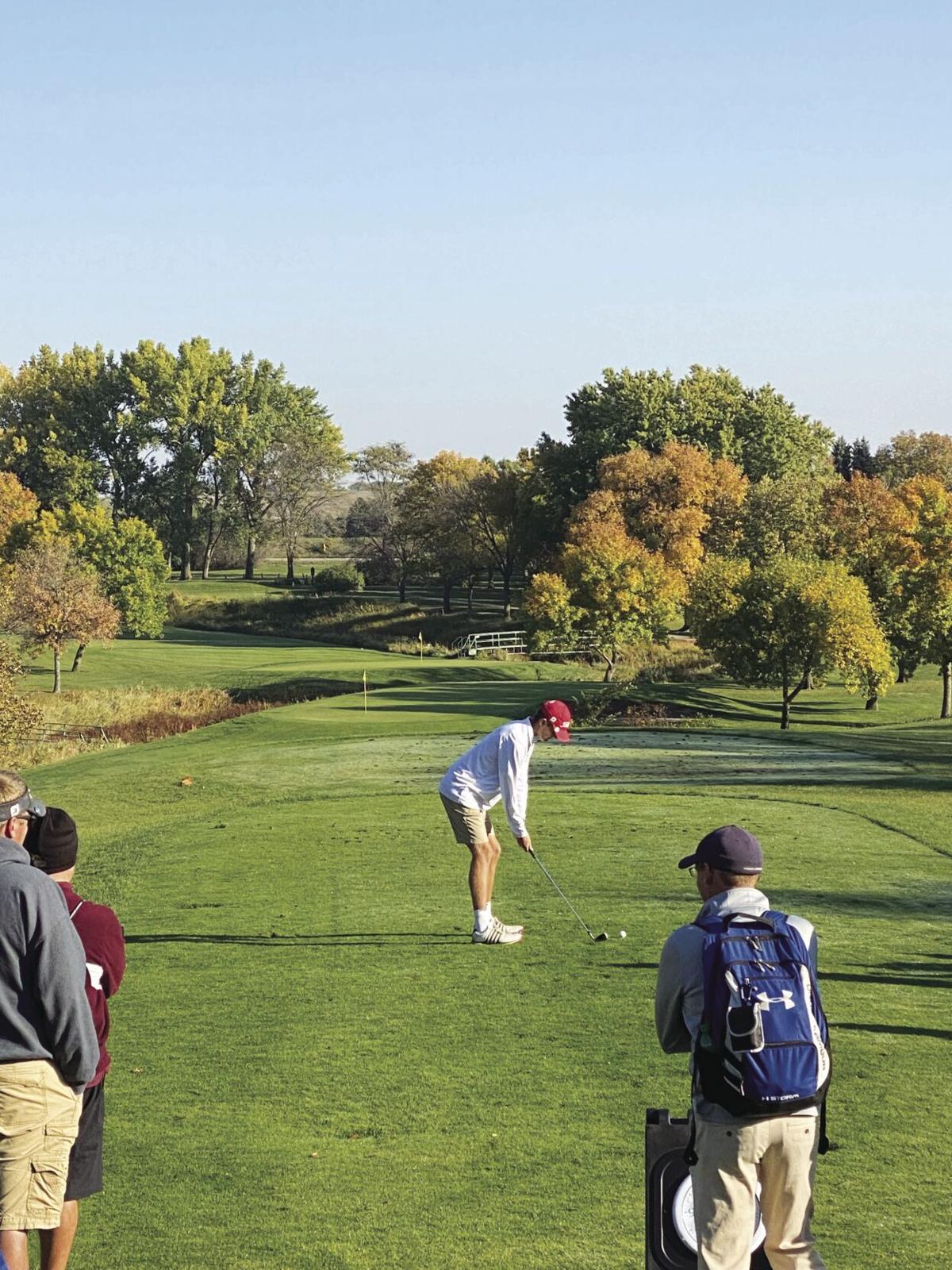 Carter Mart prepares for his drive. 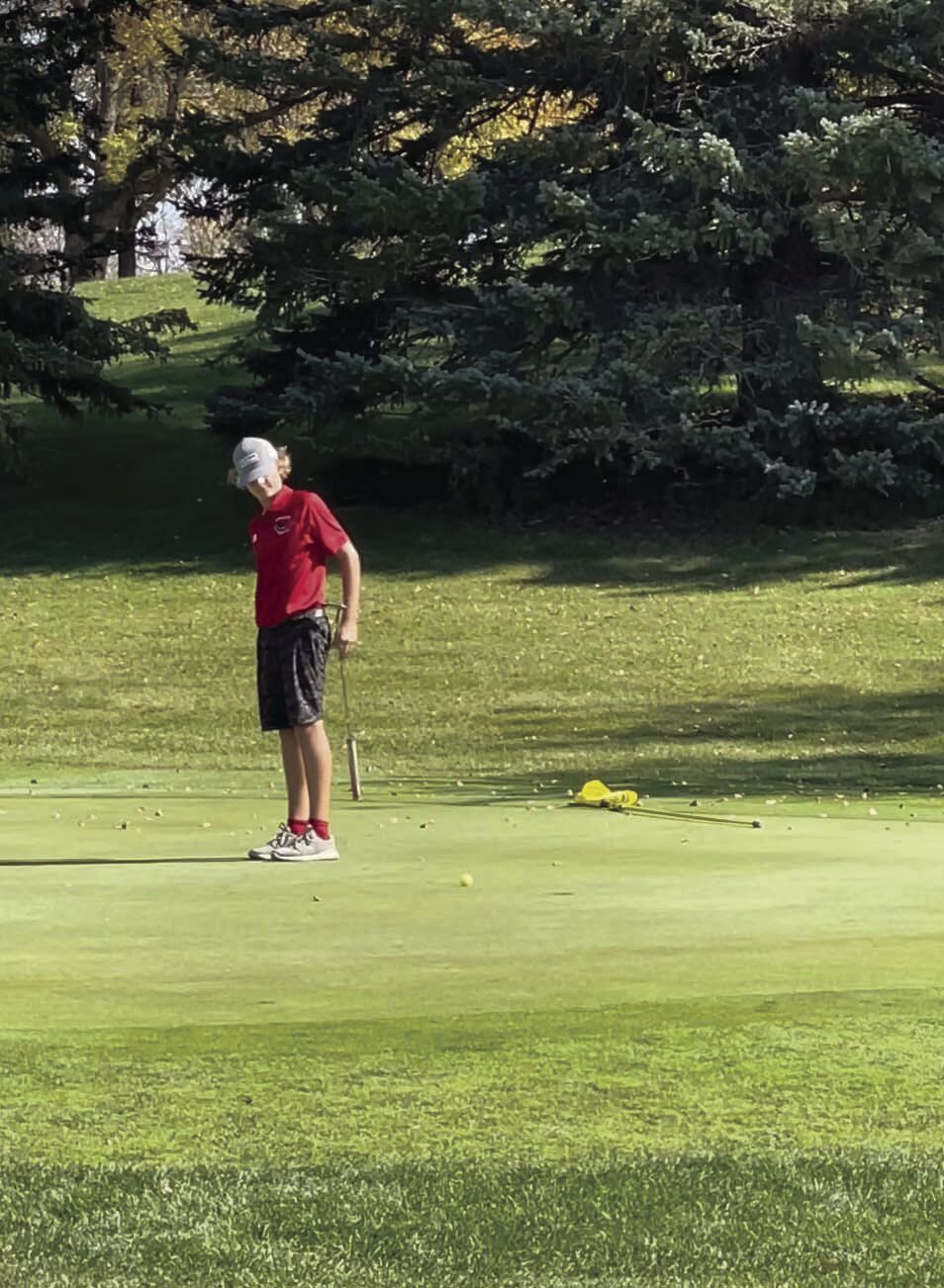 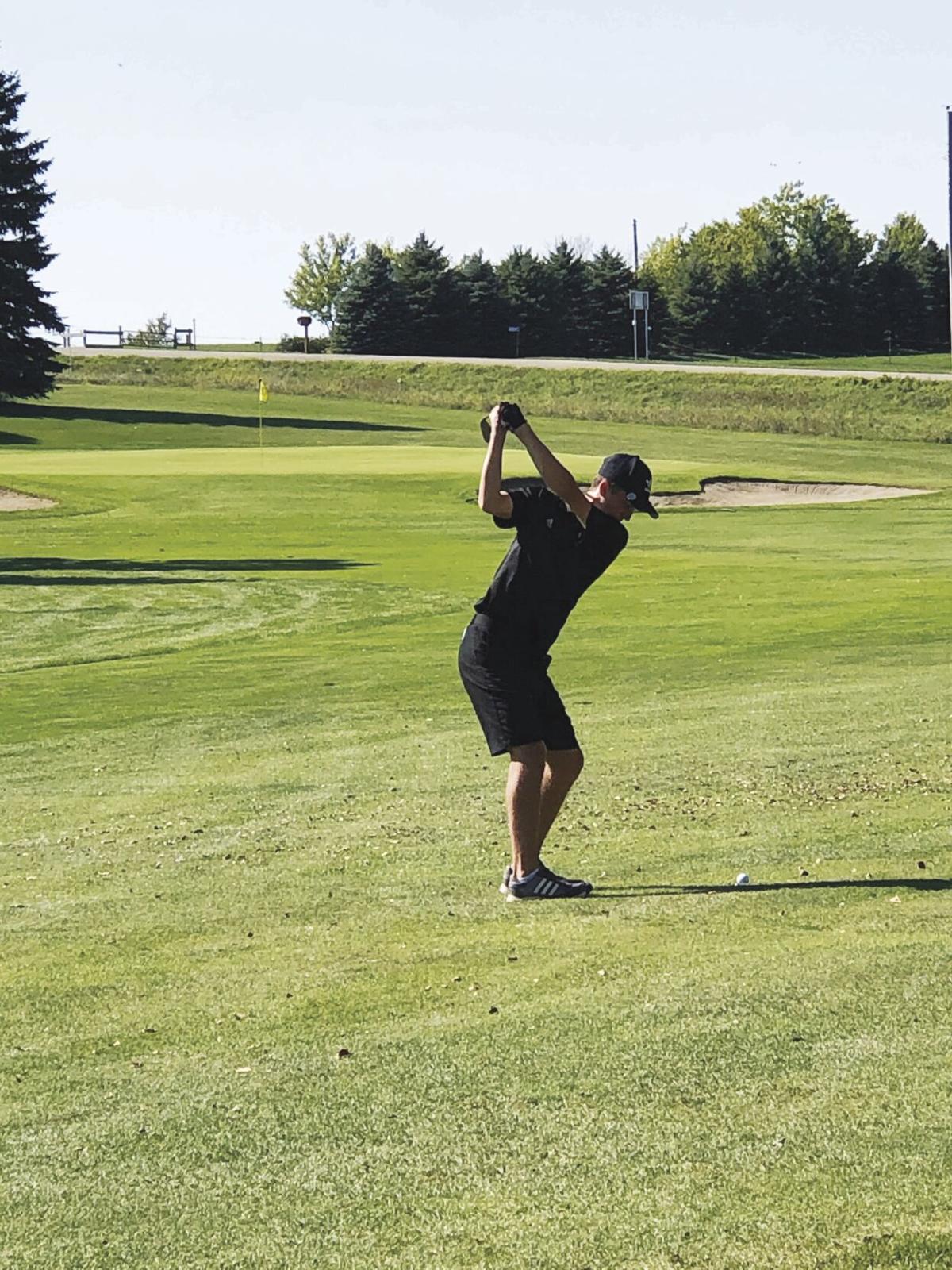 Ben Burbach with his approach shot.

Carter Hansen is pictured as he is about to send his drive down the fairway.

Carter Mart prepares for his drive.

Ben Burbach with his approach shot.

Carter Hansen’s solid two day performance in Madison along with consistent two day rounds from his brother Trey Hansen and TJ Tracy helped the Vermillion boy’s golf team to a third place finish at the SDHSAA State A Golf Tournament this week.

Along the north side of Lake Herman, just outside of Madison, the golf team sent their five that qualified as a team to the Madison Golf and Country Club this Monday and Tuesday. They met some good competition from across the state. Tea Area took home the state team championship trophy with a final score of 669. In second was West Central with a 674. Vermillion third with a 681 and fourth place went to Aberdeen Roncalli who turned in a final team tally of 687.

Freshman Carter Hansen finished tied for tenth place after the two day event, finishing Monday with a round of 83 and following that on Tuesday with an 81. Over the two rounds, Hansen carded two birdies and 16 pars. Hansen finished just outside of eighth place by only two strokes.

Kaleb Jost won the state championship from Sioux Falls Christian with a two day score of 155 (77 and 78).

Trey Hansen and TJ Tracy both helped Vermillion secure the third place team plaque with their two day totals of 168 each, in a four way tie for 15th place overall with players from Tea Area and Parkston as well.

Trey Hansen, just an eighth grader, finished Monday with a round of 86 that included seven pars. Moving on to Tuesday, he improved with one birdie and nine pars, including finishing his final 9 holes on the back nine with a 39.

Senior TJ Tracy had a great weekend on the links, with consistent performances both days as he ended both rounds with a score of 84. On Monday, Tracy recorded an eagle three on the par five number 11, and also grabbed a birdie on number 13 during Tuesday’s round. Tracy finished the tournament with 13 pars.

Ben Burbach finished his Tanager career with scores of 87 and 94, total of 181 and good for a tie at 31st place. Burbach, a senior, knocked in one birdie on Tuesday and finished the tournament with 10 pars.

And rounding out Vermillion’s state team was senior Carter Mart, whose two day total of 192 was good for a tie for 59th place. Mart recorded five pars and two birdies over both rounds, in which he recorded scores of 97 and 95.

Seniors and Next Year….

The state champwionship was the final meet slated for this year, and unfortunately brought an end to a many high school golf careers for this year’s seniors: Ben Burbach, Jackson Girard, Carter Mart, Kaleb Preister, Willis Robertson, and TJ Tracy. All of the seniors, on the state team or not, have been great contributors to the team this year and to the program as whole over the course of their high school career. Next year’s probable returners include: Ayden Clodfelter, Jacob Emerson, Mason Freeling and Rylan Moran, all in this year’s seventh grade class. Cooper Girard and Trey Hansen, both in eight grade this year. Freshman Carter Hansen, Jack Moskowitz, Karson Preister, and Kade Ruevers. That upcoming young Tanager team for 2022 will be looking to be in the top three as well next year at state and has the talent to do so.