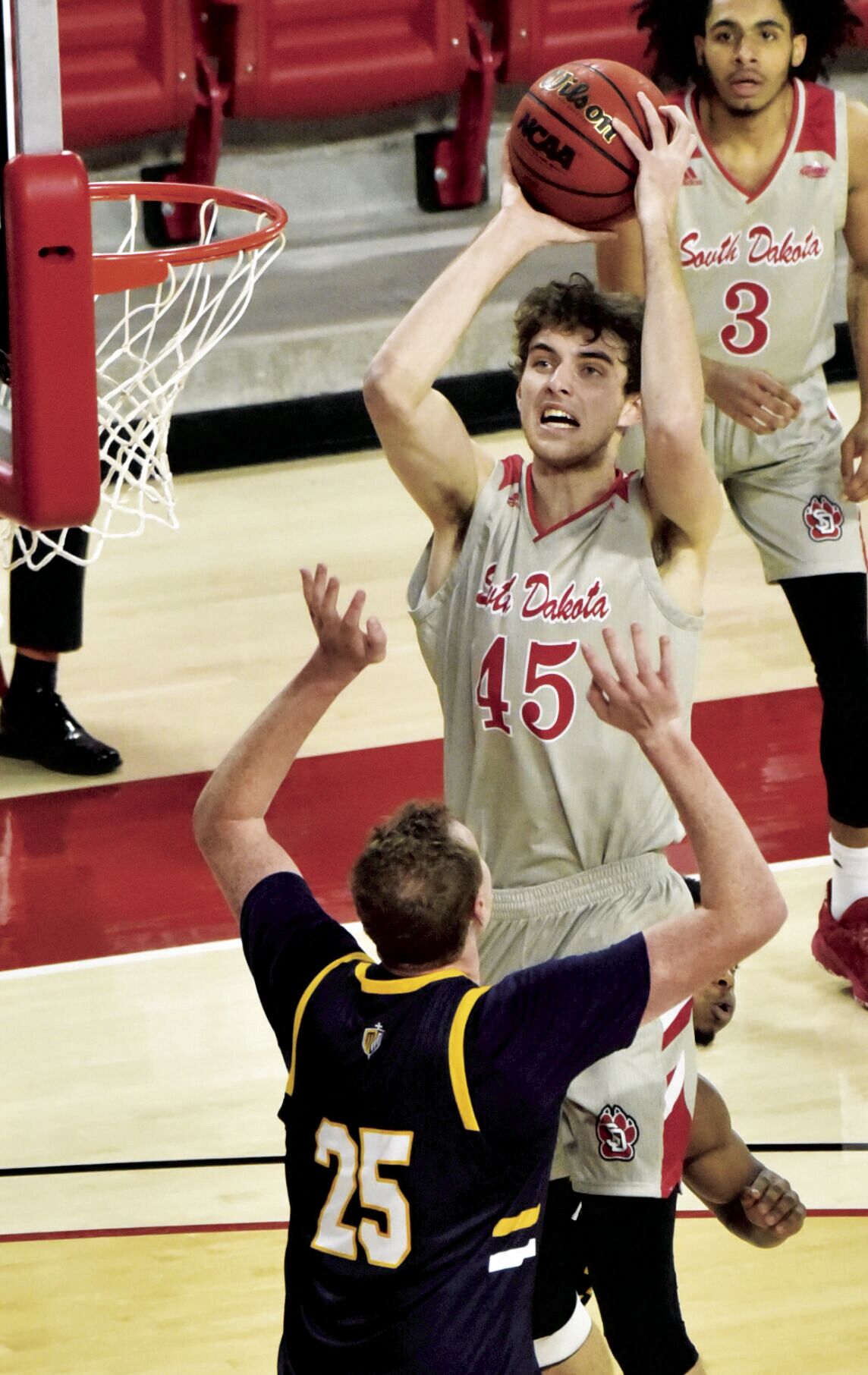 South Dakota’s Brady Heiman shoots over the defense of Mount Marty’s Lincoln Jordre during their men’s basketball game on Sunday at the Sanford Coyote Sports Center. 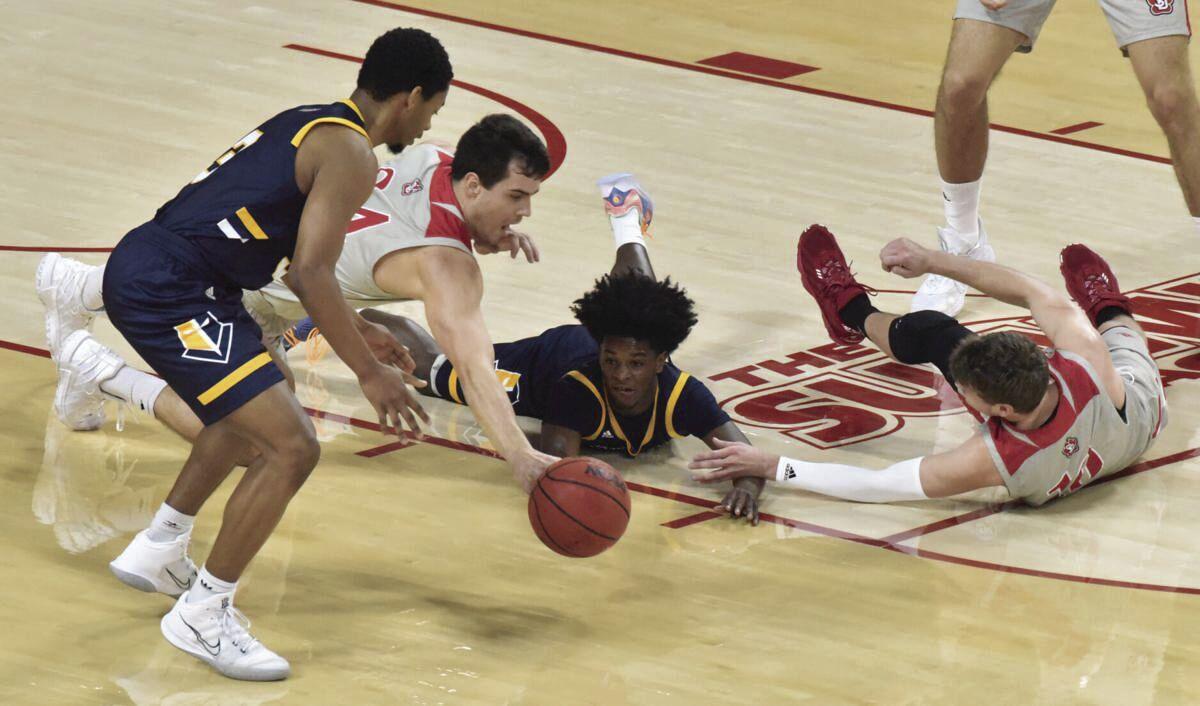 South Dakota’s Brady Heiman shoots over the defense of Mount Marty’s Lincoln Jordre during their men’s basketball game on Sunday at the Sanford Coyote Sports Center.

VERMILLION — Energy wasn’t going to be a problem.

Neither was a lack of focus or a potential ho-hum attitude, given the opponent.

No, the South Dakota men’s basketball team had plenty of reason to be zeroed in for Sunday’s home tilt against a lower-level opponent: The Coyotes had lost by 18 on their home floor two days earlier.

“That was a point of emphasis after we felt like Drake did some things against us that threw us off,” head coach Todd Lee said.

“I thought our guys did a good job.”

In their final non-conference game, the Coyotes took care of business on both ends in an 84-44 rout of Mount Marty on Sunday afternoon at the Sanford Coyote Sports Center.

It was a game where if the Coyotes (2-6) did what they needed to and avoided long let-downs, they should be able to handle the NAIA team from Yankton.

“You’re trying to get them to do their job, and it’s maybe a little bit easier after the performance against Drake,” Lee said.

“It’s not the easiest, but that is the point of emphasis, to do what we do.”

South Dakota did what was to be expected: It out-rebounded the Lancers 48-30, scored 29 points off 18 turnovers and used its size advantage to the tune of a 46-6 edge in the paint.

“Our record being 1-6 coming in, we need to continue to keep getting better.”

After having just played a conferene game on Saturday afternoon, Mount Marty was without its top two scorers (Elijah Pappas and Jailen Billings) for Sunday’s exhibition game at USD.

Certainly the Lancers were without two players who can create plenty of offense, but they ran into an expected force against the Coyotes.

“What happens in most of these DI games I’ve been a part of, the length, and consistent strength and athleticism takes you out of your normal style,” MMU head coach Todd Lorensen said.

Mount Marty committed 18 turnovers, which the Coyotes took advantage of throughout the game.

“And it was probably 50/50 in what were our bad turnovers and ones because of their size,” Lorensen added.

When Mount Marty got to within 52-31 early in the second half, it wasn’t as though the Lancers were suddenly about to mount a huge rally, but the Coyotes put things away anyway.

They reeled off the next 16 points to take even further control of the proceedings.

Outside of Umude, the Coyotes got 13 points from A.J. Plitzuweit, 11 points off the bench from Mason Archambault and seven rebounds from Xavier Fuller. In total, USD’s reserves scored 37 points and five saw at least 10 minutes of action, which should only help the Coyotes, according to Lee.

The Lancers also had plenty of reserves see the floor, including the first varsity action of the season for Chase Altenburg and Hunter Kotrous.

“It was good to see other guys get out there and compete, and it was really good for our South Dakota guys to get some time in a game like this,” Lorensen said.

In the absence of other players who didn’t make the trip, freshman transfer Lincoln Jordre was in the starting lineup for the Lancers.

“He just needs to play,” Lorensen said. “This is his third year out of high school, but when you look at minutes played, he’s hardly played college basketball,” Lorensen said.

Jordre made 2-of-6 shots for five points and also pulled down three rebounds in 22 minutes of action.

“We saw some really positive signs from him,” Lorensen said. “He’s a big dude and it’s hard for people to move him around.

“We just need to find ways to keep developing him.”

The Coyotes will begin Summit League action Jan. 3 at home against Denver, and will then play the Pioneers again the following day.

“The time off is big for us, for sure,” Umude said. “It’s an earlier Christmas break and we’ve been here for a while, grinding. It’s been a tough fall.”