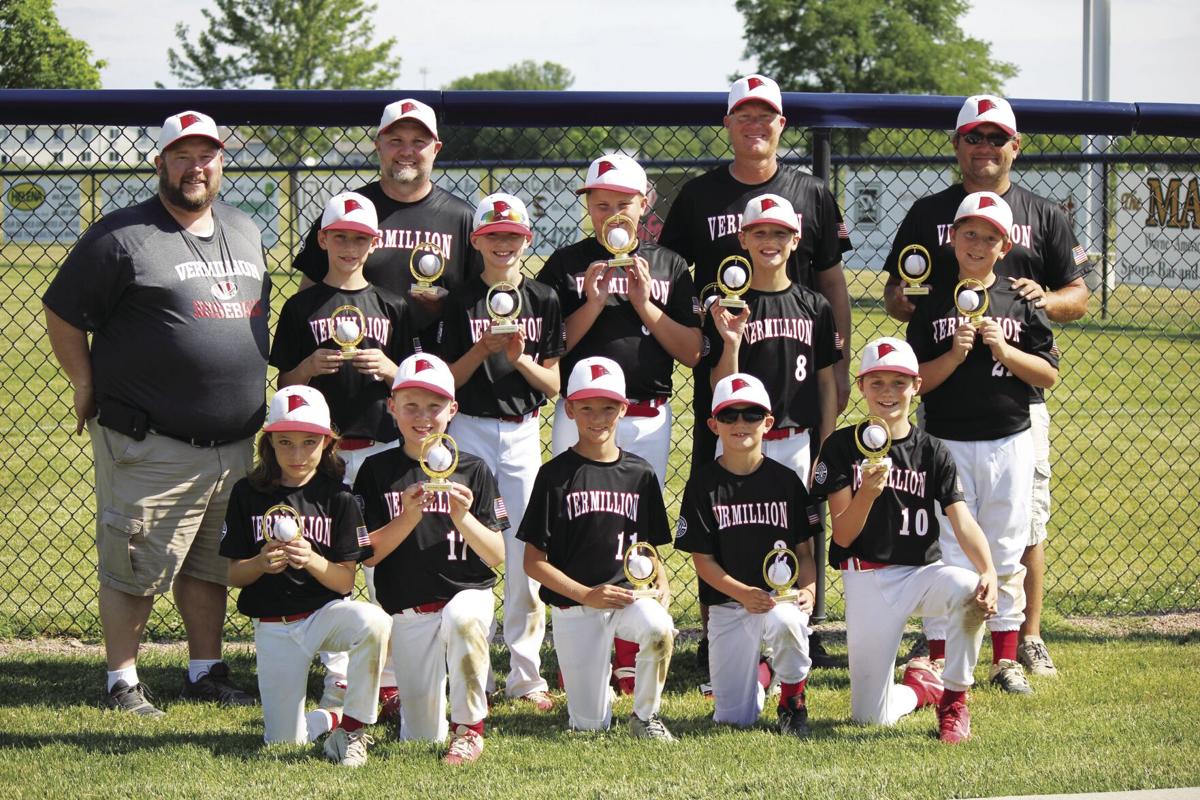 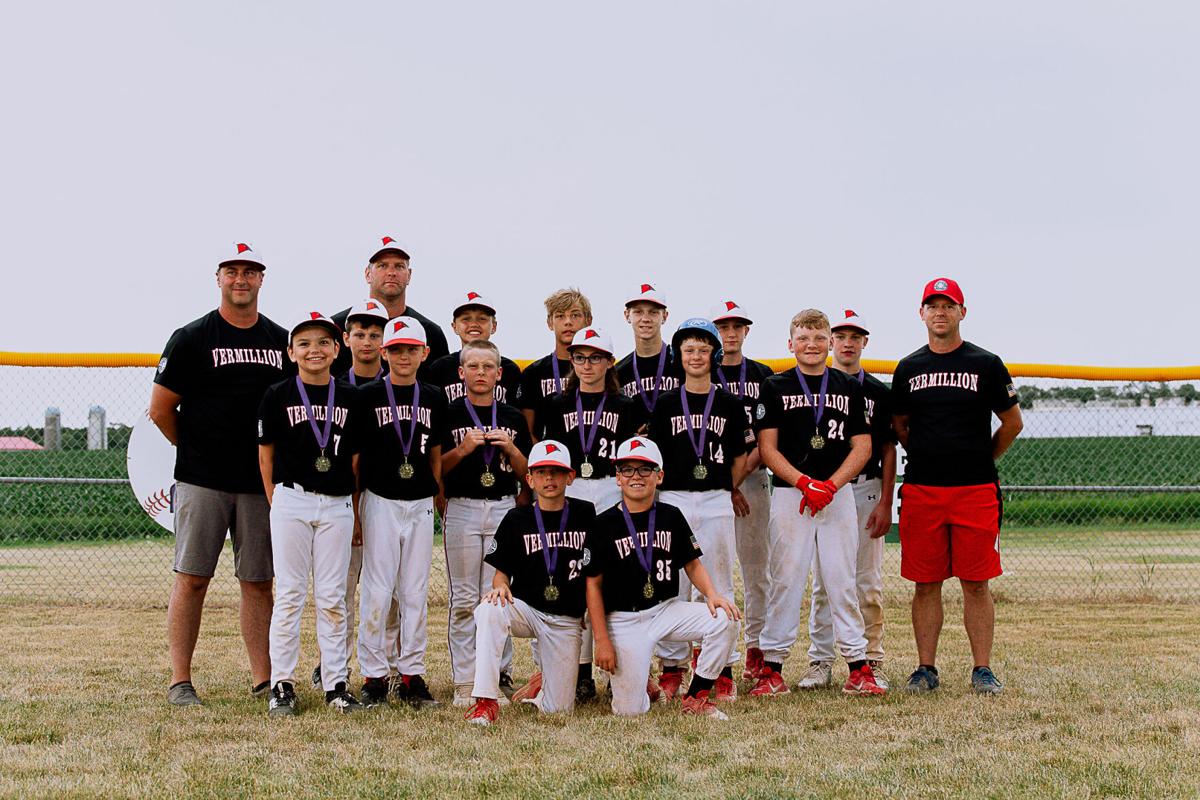 Vermillion’s 10U squad held West point to only two hits and took game one by a final score of 8-4.

Ermerson Jarchow, Luke Uhl and Sam Vitt had two hits apiece and tallied all the Vermillion hits in the game. Jarchow and Vitt collected two doubles, Uhl had two singles. Between the three Vermillion batters, they would drive in four runs.

Kole Larson got the start on the mound, going four innings with nine strikeouts and only allowing one earned run. Larson did not allow a single hit in time on the mound. Maddox Standley finished the remaining two innings, and grabbed two strikeouts.

Vermillion jumped out to a big, early lead and held off a late comeback attempt by Wayne as they took game two 11-8.

Kellen Beach completed the first three and a third innings of the game. He struck out six Wayne batters and scattered seven hits.

Sam Vitt came in relief of Beach as he went the remainder of the game, earning five strikeouts while only allowing three hits.

Sam Vitt was back on the mound for game three as he threw a complete game shutout and the young Tanagers punched their ticket to Sunday morning’s championship game by a final score of 6-0.

Vitt struck out a total of 11 batters in the six innigs of work and only allowed two hits and one walk. Vitt also helped his cause adding a single while at the plate.

Vermillion grabbed 10 total hits and was led by Kellen Beach and Luke Uhl with two each. Beach added a single and a double with three RBI.

Sunday morning’s championship game in Wayne came early and so did the Vermillion bats as they smacked a total of 13 hits to win the Wayne Youth Baseball Tournament over Logan View 11-0.

Ben Green led Vermillion with a home run and two more hits on the morning. Green would knock in a total of seven runs over the three hits.

Vermillion had four other batters with two hits each, including Luke Uhl, Kole Larson, Grayson Jacobs, and Sam Vitt. Larson’s two hits were doubles and he earned one RBI in the process. Vitt added a single and a double and one RBI.

Kellen Beach started on the mound again, this time going four innings with eight total strike outs and only one walk. Beach would surrender the only two hits in the game for Logan View. Emerson Jarchow mopped up the remaining one inning and sealed the victory with two strikeouts, no walks and no hits in the fifth.

Luke Jensen’s bat came alive in the final frame of game one as he propelled Vermillion to walk-off hit and victory 6-5.

Jensen’s fly ball to left in the bottom of the fifth scored Austin Sudbeck and the young Tanagers walked-off in fine fashion to get a much needed win. Jensen was mobbed at first base by a dugout full of excited teammates as the Vermillion 12U squad won their first of three games on the day. Jensen concluded the day going two for three with two singles and three RBI.

Matthew Roob was three for three on the day including a great bunt for base hit just before Jensen’s hit in the fifth.

Ryne Chapman was 2-2 on the day with a double and a home run over the left field fence, notching two RBI.

Ryan Vitt and Sudbeck each chipped in a hit as Vermillion recorded nine hits in the ball game.

Vitt was on his game again on the mound, going three innings, allowing four hits, no runs and striking out eight. Karston Jacobson and Chapman did the relief work with each earning a strikeout in their inning of pitching.

Ryan Vitt, Cooper Reiser, Rylan Moran, Luke Jensen and Padraig Fulton each had a hit for Vermillion. For a second game in a row, Vermillion would collect nine total hits in the game.

Vermillion four pitchers to keep Harrisburg from earning a come from behind victory. Ryan Vitt again started on the mound, this time only going two innings, recording five strikeouts while only allowing one hit. Teddy Nesmith, Mason Freeling and Ryne Chapman each helped out defensively for an inning a piece. Chapman and Freeling struck out all three outs in their inning. Nesmith recorded a strikeout. After game two, Vermillion clinched a spot in the championship game later that evening.

For a third game in a row, Vermillion added nine more hits to the scorebook as the 12U club went on to defeat Sioux Center 13-4.

Karston Jacobson started on the mound and notched six strikeouts in three innings. He only surrendered two hits and allowed just one unearned run.

Roob would do the relief in the fourth, fanning two and only giving up three hits.

The game would be shortened due to time constraints with tournament rules.

In the championship game, Vermillion exploded for 13 hits in four innings as they defeated Canton, winners of the opposing pool, by a final of 12-2.

Mason Freeling capped off the game with a walk-off hit that scored the winning run which ended the game early in the bottom of the fourth due to the 10-run rule. His single scored Austin Sudbeck.

Cooper Reiser, who did the majority of the catching all day, finished the championship game three for three with three RBI, collecting two doubles and a single.

Freeling, Duke Job, Grant Roerig, Ryne Chapman, Luke Jensen and Sudbeck all would add one hit each for the Vermillion offense.

Vitt went the first three innings, allowing just one hit and striking out three. On the day, Vitt threw a total of eight innings and struck out 16 batters, all while not walking a batter and not allowing a single run.

Rylan Moran would relieve Vitt, pitching just the top of the fourth, recording one strikeout and only allowing three hits.