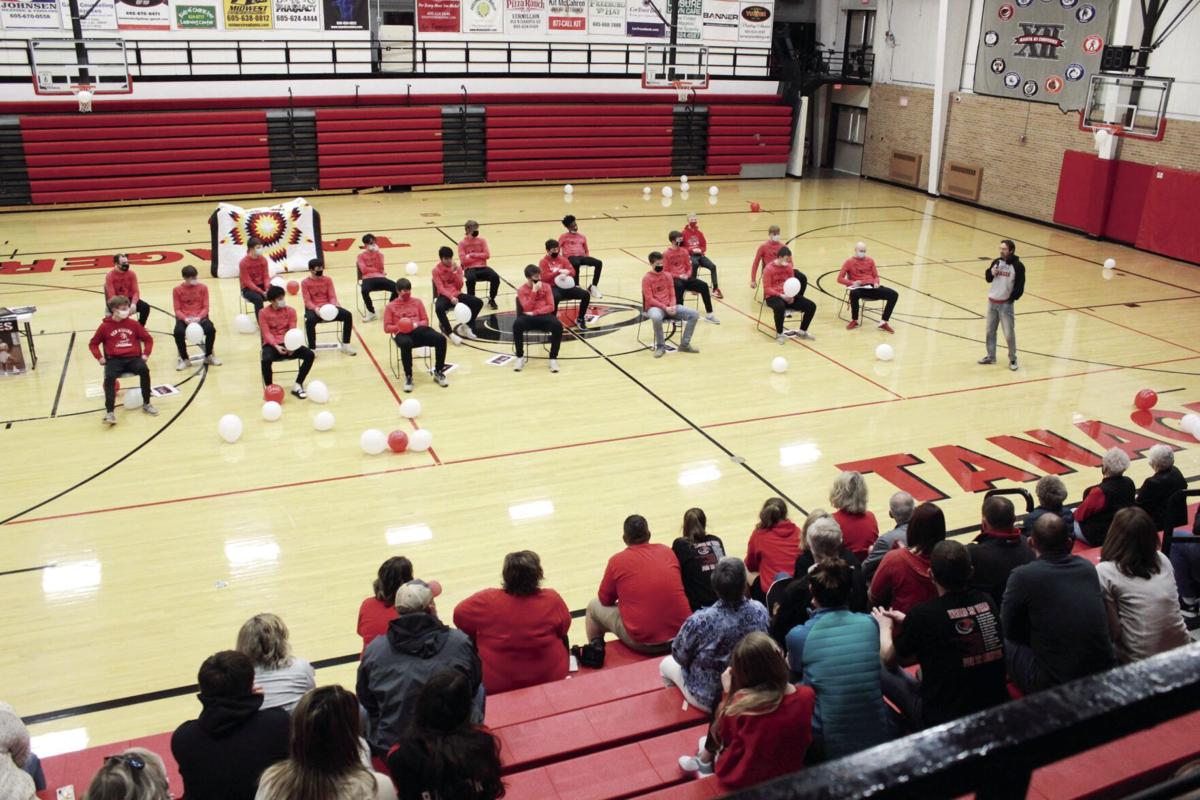 Coach Jay Drake, standing at right, addresses the crowd of Vermillion Tanagers Boys' Basketball fans that turned out Sunday afternoon in the Vermillion High School gymnasium to welcome the team home after it competed in the South Dakota State A Basketball Tournament March 18 through March 20. 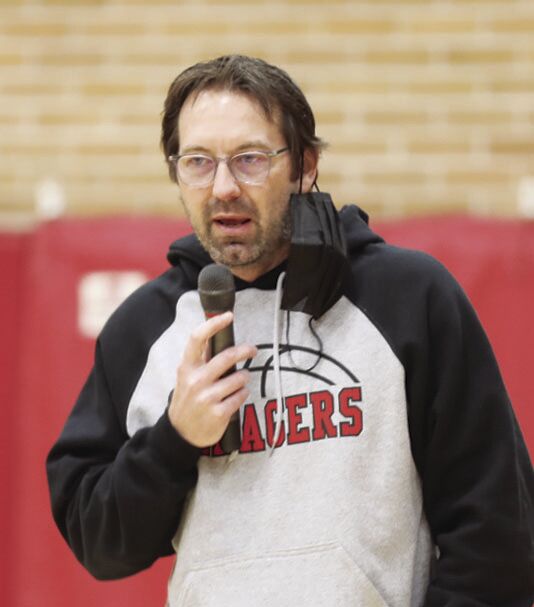 Coach Jay Drake, standing at right, addresses the crowd of Vermillion Tanagers Boys' Basketball fans that turned out Sunday afternoon in the Vermillion High School gymnasium to welcome the team home after it competed in the South Dakota State A Basketball Tournament March 18 through March 20.

Jay Drake, head coach of the Vermillion Tanagers boys’ basketball team, said his players learned last week how in life, the smallest of things can make a huge difference.

“It’s life and that’s what sports is all about,” he said, “because the reality of the situation is if his shot goes an inch left, and inch long, an inch to the right – it goes out.”

The shot he was speaking of left the hands of Dell Rapids Quarrier Landon Ruesink a split-second before the final buzzer sounded from three-point territory at the conclusion of the Tanagers’ first game of the tournament, defeating Vermilion in a heartbreaker.

“We’d all be going crazy Thursday night, saying ‘holy cow, we’ve made it to state semis. This is great!’ the coach said. “But it goes in and we’re sitting there, saying ‘it’s the end of the world.’ I kind of felt that same way, too … but the reality of the situation is we played the exact same way for 32 minutes and their (Dell Rapids) shot went in.”

The Tanagers, who traveled to the South Dakota State Class A Boys’ Basketball Tournament in Sioux Falls top ranked and undefeated during the season, lost their first two games in the tournament with nail-biting finishes, tasting defeat first to Dell Rapids on Thursday 53-52 when Ruesink’s three-pointer at the buzzer gave his eighth-seeded Quarriers team the win.

On Friday, the Tanagers met No. 5 St. Thomas More Cavaliers in the South Dakota State Class A Boys’ Basketball Tournament on Friday afternoon. Once again, victory eluded the Vermillion team, who fell to St. Thomas More. 35-32.

The bright spot of the tournament came Saturday when Vermillion, playing much as it had all season, defeated Winner 78-49 to bring home the seventh place tournament plaque. Family, friends and fans gathered in the Vermillion High School gymnasium Sunday afternoon to give the Tanagers a formal welcome home and help celebrate their tournament accomplishments.

Team members sat masked to mitigate COVID-19 in rows of chairs on the VHS gym floor. Their fans sat in the gym bleachers, cheering the 2020-21 team one last time.

“We played extremely hard under tough circumstances when our dream had been taken away from us the night before,” Drake said, speaking of Friday’s game against St. Thomas More. “We just didn’t make shots. We had a tough time scoring the basketball and for as hard as it might be to watch as fans, we were extremely proud of this group because they did exactly the same thing that we’ve asked all of you – defend, play hard and give ourselves a chance.”

“For as frustrating and for as disappointing at times this past weekend was … we played 25 games this year, won 23 of them and our two losses … literally came down to the final possession (in each of the first two tournament games),” Drake told the crowd. “We literally had a shot right here,” he said, marking an area on the gym floor where Dell Rapids’ Ruesink launched his three-pointer, “that went in. And against St. Thomas More, we had one more three-point final possession to tie it. We played to that final possession.”

Drake noted the Tanagers made their first state tournament in 32 years last week and in recent years has come close but has just run into tougher opponents in region play.

This year, obviously was different. But, the coach noted, it became apparent that things were going to be different at the very beginning of the season.

“If you look at the 22 games going into the state tournament, we only trailed in the fourth quarter by one game and that was against Dell Rapids the first time we played them,” Drake said. “We controlled every game.

“We were all disappointed Thursday, but it’s a game of inches, ounces and we couldn’t get away from it,” he said. “You just want to hide, but on social media, you see that (buzzer beater) shot everywhere.”

The worst thing about a state tournament, the coach said, is that someone has to get beat.

Teams, like the Tanagers, work hard and do all they can to earn that tourney berth, he said. “The bad part about it is somebody is going to walk away, no matter what happens, losing three games … that was my fear for these guys yesterday, but they answered the call.

“What was special about yesterday (Saturday) was is that as tough as Thursday and Friday were … for the first time this weekend we walked away and it wasn’t the place that we wanted – seventh place wasn’t what we were going there to get – but this group walked away looking like the team we’ve seen all year and that’s because their shots went in,” Drake said. “I’m happy for these guys that we could leave on that note.”

He noted that the younger members of the team will be stepping up next year to fill the roles of seniors Connor Saunders, Jakob Dobney, Dillon Gestring, Cael Mockler and Noah Gilbertston.

“All I can say is, what a ride – because that’s what it has been,” Drake said. “We wish it didn’t have to end but we’re forever thankful for what you guys have done. I’ve never seen a group – and I’ve been a part of a lot of teams – I’ve never, ever seen a group that bought in to exactly what a coaching staff wants, is willing to do it and does what is best for the team.”

“Thanks to all of the parents and to the student body for all of the support,” senior Noah Gilbertson told the crowd. “It really does mean a lot.”

“Everything that could be said has been said,” senior Jakob Dobney said. “I just want to take this time to thank everybody for supporting us throughout the season. It really means a lot to us.”