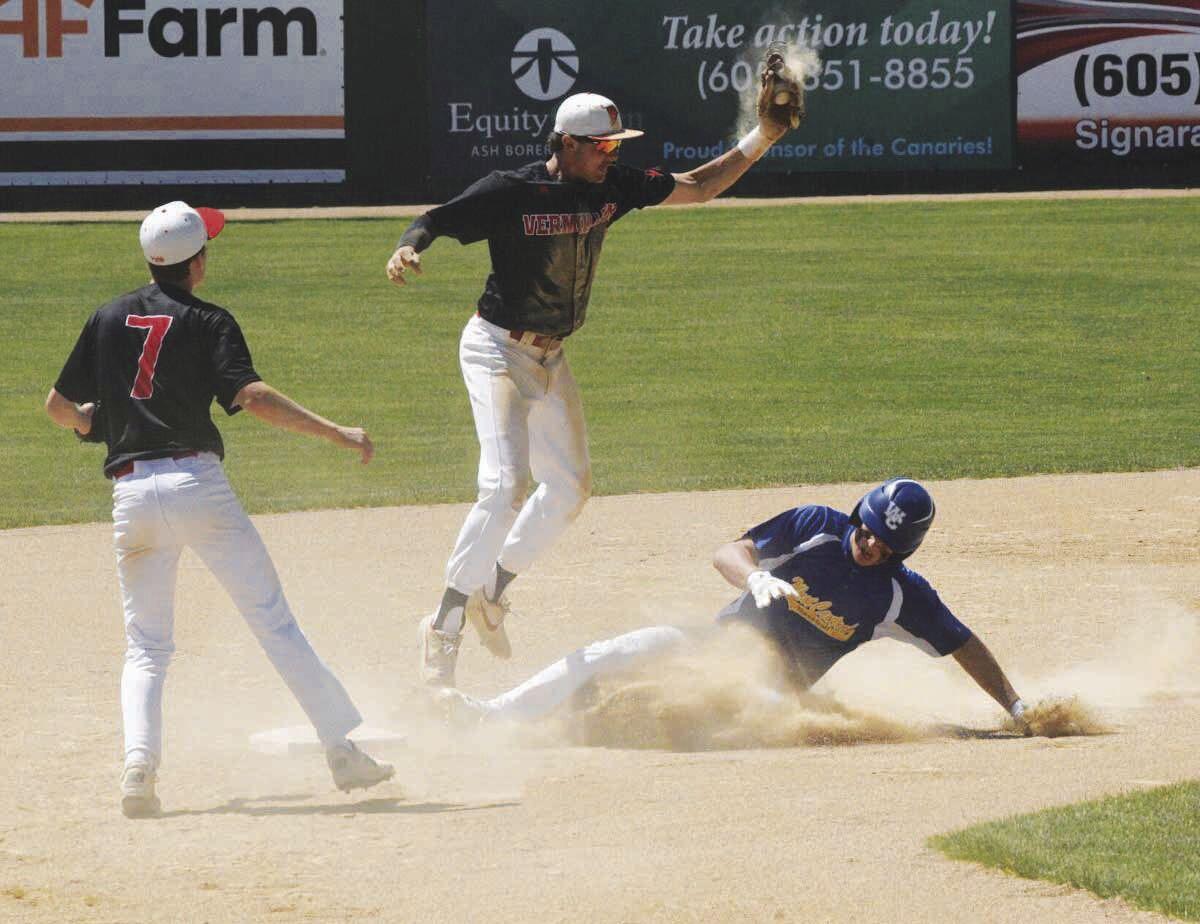 Vermillion shortstop Jack Kratz fields a throw to second base as teammate Ben Burbach looks on during Tuesday's Class 'B" State Tournament semifinal against West Central in Sioux Falls. 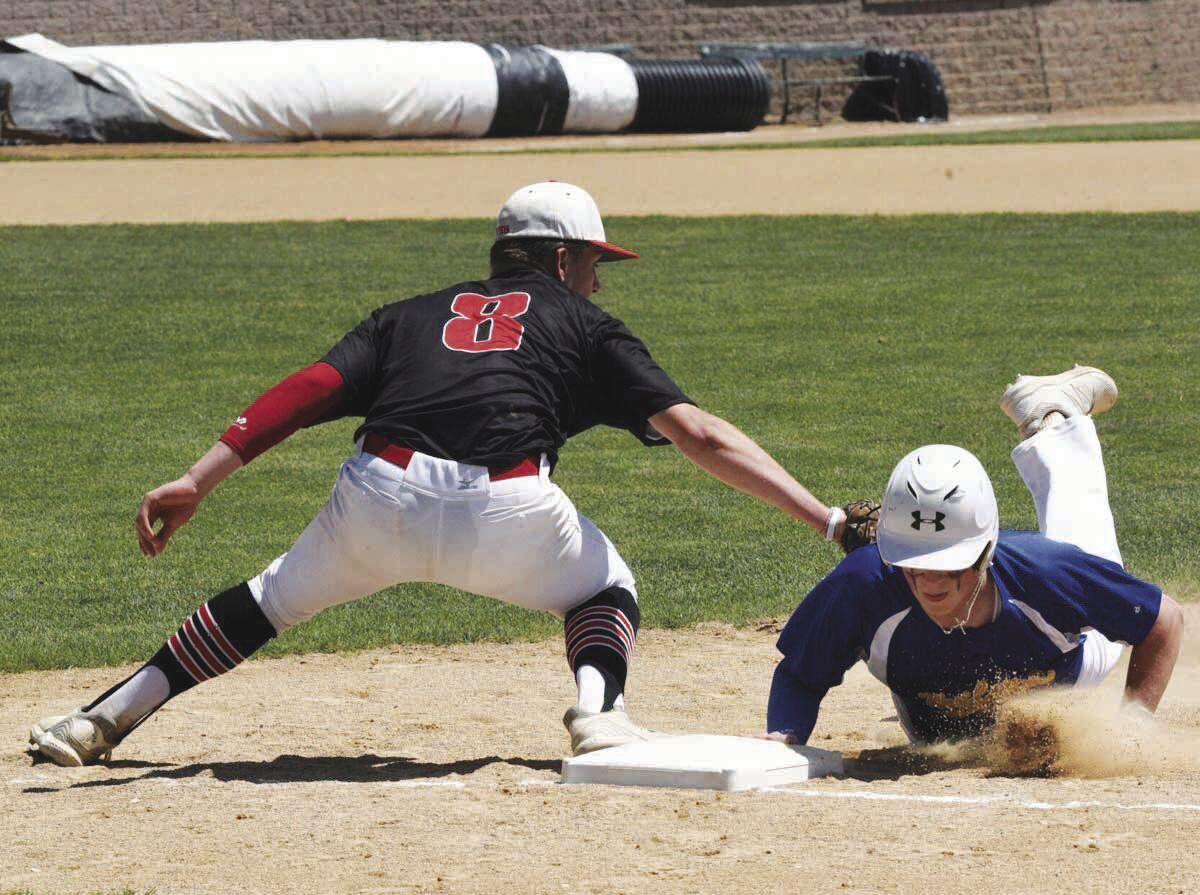 Vermillion first baseman Jake Jensen applies the tag on a pick-off attempt at first base against West Central Tuesday at Sioux Falls Stadium. 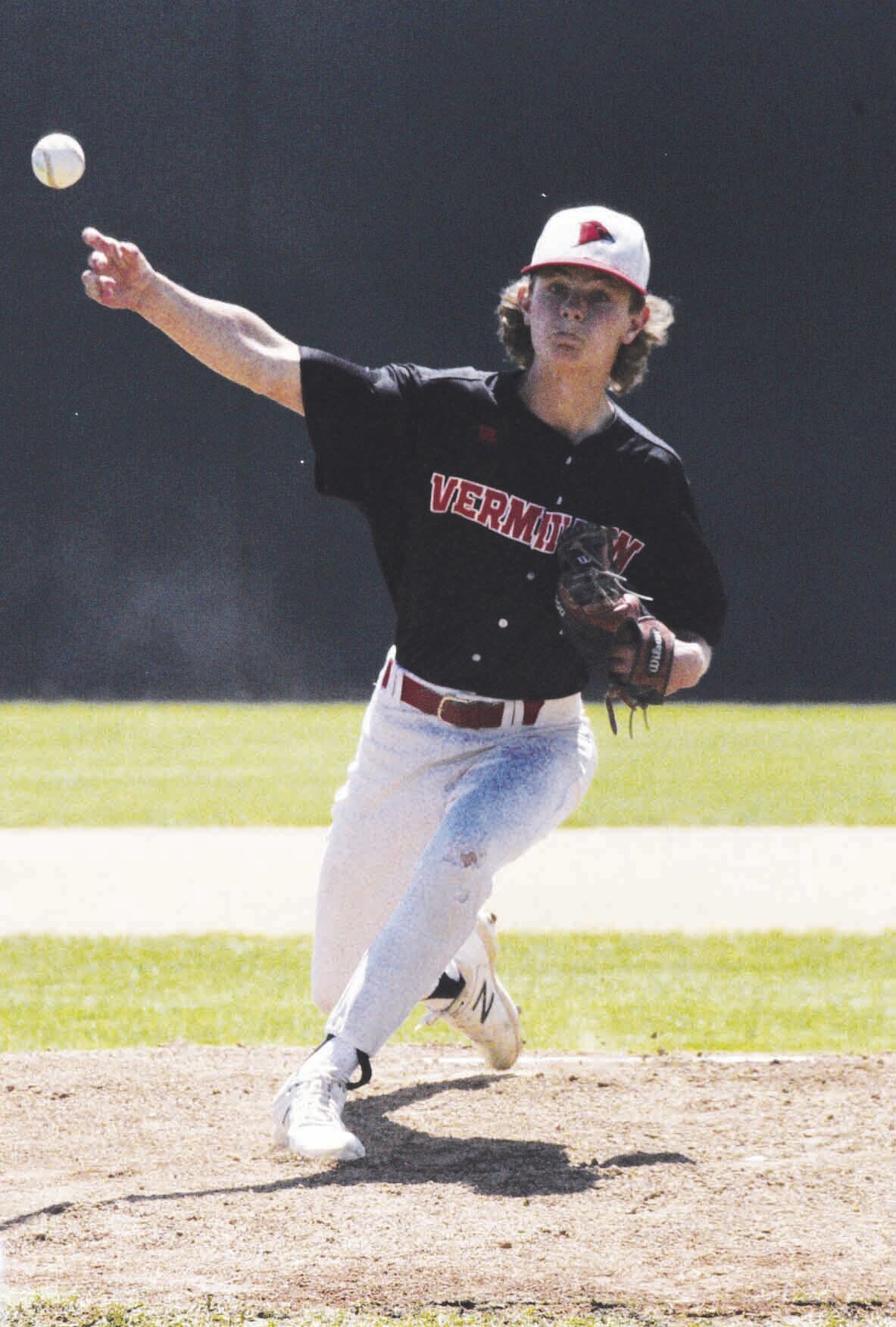 Vermillion shortstop Jack Kratz fields a throw to second base as teammate Ben Burbach looks on during Tuesday's Class 'B" State Tournament semifinal against West Central in Sioux Falls.

Vermillion first baseman Jake Jensen applies the tag on a pick-off attempt at first base against West Central Tuesday at Sioux Falls Stadium.

SIOUX FALLS – The Vermillion Tanager baseball team fell behind three runs in the first inning, and were not able to overcome the deficit, falling 9-4 to West Central in the Class ‘B’ State Semifinals at Sioux Falls Stadium.

“They battled,” Vermillion head coach Tom Heisinger said. “Coming from the beginning of the year, we had a bunch of new guys play and they improved a lot. It wasn’t anything that us as coaches did, they just got better and we appreciate that. They fought for us all season and I’m proud of every one of them.”

The Tanagers rolled out Willis Robertson as the starter, and Robertson gave up three runs in the first before settling in to pitch five innings. Robertson struck out the side in the second inning, and made it five innings before being taken out for Clayton Sorensen.

“He (Robertson) didn’t have his best stuff today, and I think he would tel you that,” Heisinger said, “But he battled man. He gave up three run right away, right away got punched in the face, but he found a way to settle in and found a way to keep us in it and compete.”

At the plate, Vermillion broke into the scoring column in the fourth with a Jake Jensen sacrifice fly. Jensen recorded a second sacrifice fly in the sixth to bring in a runner. Vermillion scratched two across in the fifth, with Senior Nick Roob hitting an RBI-ground out and senior Connor Saunders hitting a single and a run scored on an error.

“Jake, he’s come a long way from when he was a freshman and sophomore,” Heisinger said. “We didn’t score enough today, but I thought we had quality at-bats, and we saw some quality pitching. I’m proud of our kids, they battled at the plate.”

Vermillion struggled to get much going on West Central starter Braden Herr. Herr pitched four and two-thirds innings, giving up three hits, three runs and three walks, while striking out two Tanager batters. Grafton Stroup pitched an inning and a third, giving up one run.

The Tanagers committed five error defensively, something the Trojans took advantage of.

“We pride ourselves on being good defensively, and some weird things happened and we’re not use to that,” Heisinger said. “Those areas hurt us and they should, that’s kind of the name of the game. We can’t have five errors and expect to win many games.”

Vermillion’s season comes to a close with a State Semifinals berth and returning all but two players for next season. Seniors Connor Saunders and Nick Roob played their final game in a Tanager uniform Tuesday.

“We have a lot of juniors on this team that will be back,” Heisinger said. “I feel for our two seniors, to go out like this. But it is a confidence boost (to make it here) for sure. A lot of guys hadn’t played a lot of varsity baseball before this, so to make it to the state tournament, we’re satisfied with that.”

West Central advanced to the Class ‘B’ Championship to face the winner of Dakota Valley and Dell Rapids Tuesday evening.