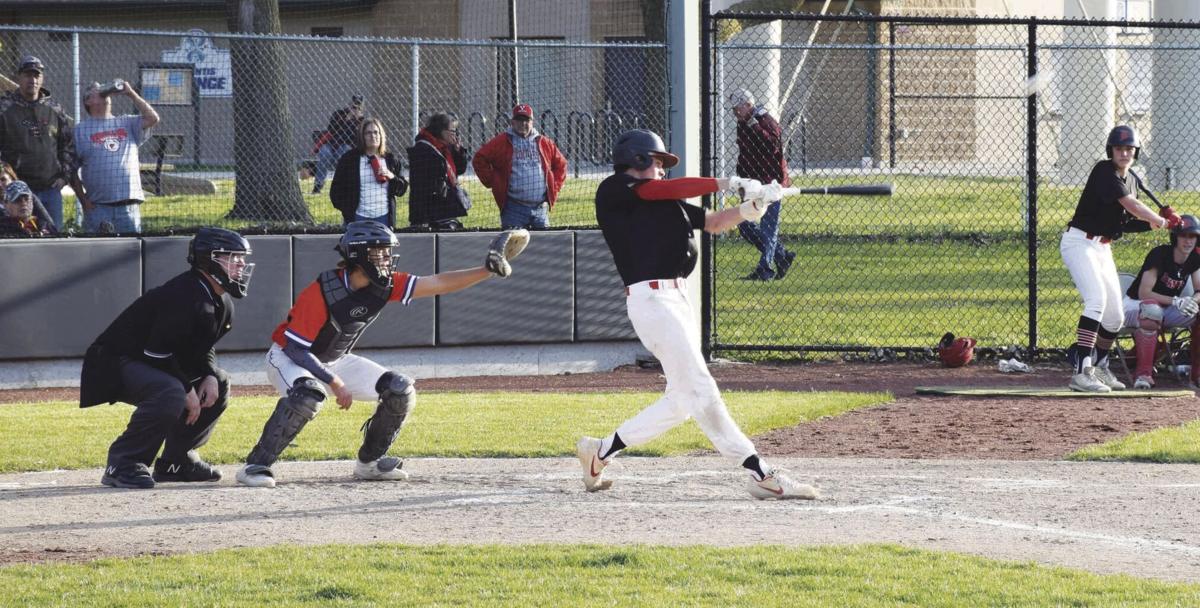 Jack Kratz connects with the ball vs Parkston on May 12. 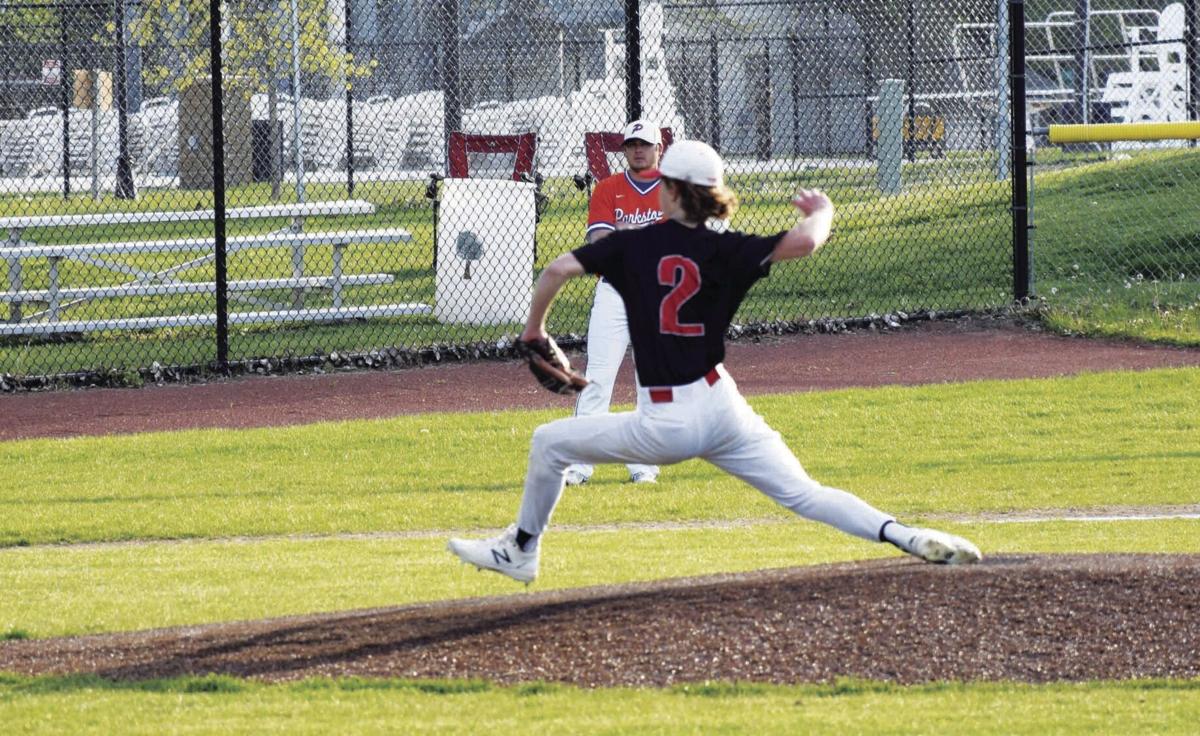 Willis Robertson delivers a pitch during the Vermillion vs Parkston game on May 12. 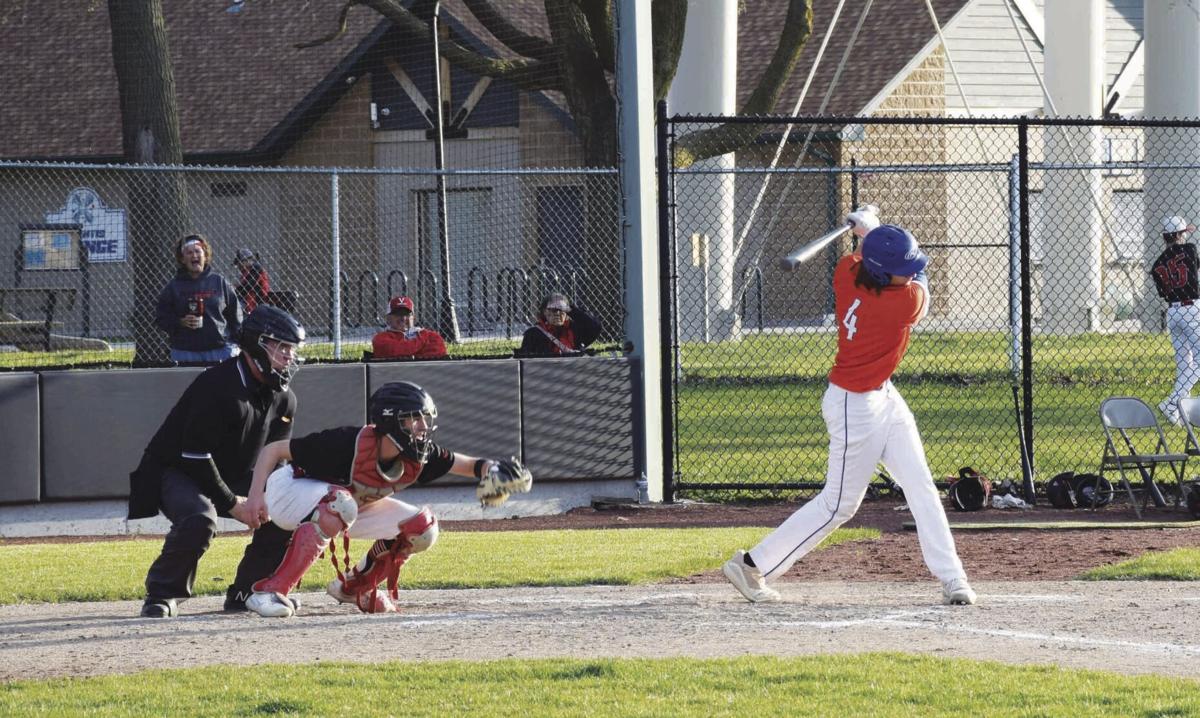 Catcher TJ Tracy squeezes strike three for the last out of the game securing the win over Parkston on May 12.

Jack Kratz fields a ground ball at shortstop and throws out the runner at first vs Wagner on May 18. 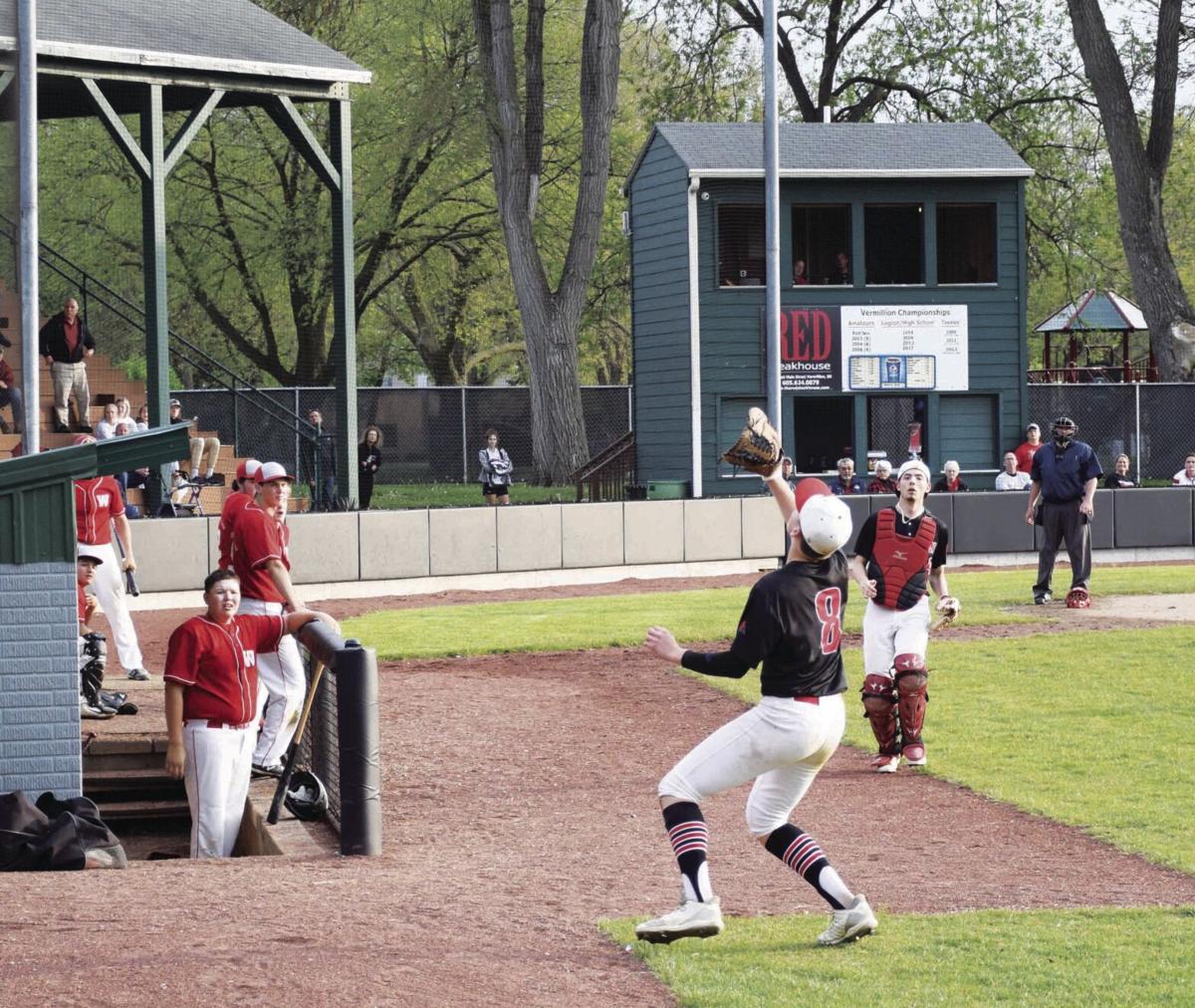 First baseman Jake Jensen moves into foul territory to catch the ball. Jensen made the catch, which was the final out of the game, giving Vermillion the win on May 18 against Wagner.

Jack Kratz connects with the ball vs Parkston on May 12.

Willis Robertson delivers a pitch during the Vermillion vs Parkston game on May 12.

Catcher TJ Tracy squeezes strike three for the last out of the game securing the win over Parkston on May 12.

Jack Kratz fields a ground ball at shortstop and throws out the runner at first vs Wagner on May 18.

First baseman Jake Jensen moves into foul territory to catch the ball. Jensen made the catch, which was the final out of the game, giving Vermillion the win on May 18 against Wagner.

Three big wins in region play in the last week helped the Vermillion Tanagers baseball team secure the three seed in the region next week in Elk Point.

Vermillion had must win games against Parkston and Bon Homme and came through in fine fashion. Topping it off was a 10-0 win Tuesday night at Prentis Park, a game shortened due to the run rule.

The game was a big one on the Tanagers late season schedule as they earned another quality region win, assuring them of finishing in the top four of a very tough region.

Jake Jensen got the start on the mound and allowed two runs in the Parkston first inning. But Vermillion would get back into the contest, plating one run in the bottom of the first and two more in the bottom of the third to earn their tenth victory of the spring season.

Jensen finished the evening giving up only the two earned runs, and adding two strike outs over his four innings on the hill and earning his fourth win of the season.

Willis Robertson came on in relief of Jensen in the top of the fifth and would slam the door shut on Trojans. Robertson finished the evening with three innings pitched, fanning five while only allowing one hit. The win notched his second save of the season in the stat book.

It was a tense top of the seventh as Robertson served up three straight balls to the first batter of the inning, which drew cheers from the visitor’s bench. But the junior calmed down, came back and struck out that batter, as well as then next two which finished the game.

Robertson was determined to seal the victory for the Tanagers in the seventh. “I just kind of thought to myself I’m not going to let this get away, obviously with the lead only up by one, I knew I had to take care of business and pitch strikes,” Robertson added after the game.

Vermillion would earn six hits on the evening, all singles. TJ Tracy and Jensen led the way for Vermillion. Tracy would smack two hits and earn an RBI and Jensen hit safely once earning an RBI.

Connor Saunders added two hits and Robertson added one more for the Tanagers. “Tonight was a good win against a good team, I don’t think we had any errors we played good all around, put the bat on the ball, had some hits and scored some runs” said Saunders after the game.

Head Coach Tom Heisinger said after the game “we hit the ball well enough just enough to score runs to hold on to the lead. Good stuff from all of our kids.”

Saunders, Kratz, Jensen and Willis Robertson all added an RBI for Vermillion.

Offensively, Coach Heisinger said “we had some tough at-bats, with Reece Proefrock getting us going. Starting a four run inning with nobody on and two outs is not generally how we like to score, but it was good to see the two out hitting from Saunders, Robertson and Kratz.

The Tanagers and Bon Homme would put up zeros in the run column until the third inning, when Vermillion scored four. They would add two more insurance runs in the fifth and that was all that was needed.

On the mound, Jensen was near perfect, not allowing a walk in seven innings pitched and recording three strikeouts. The only perfect game prevention was giving up just two Bon Homme hits all evening.

Coach Heisinger said after the game “Jake Jensen set the tone for us on the mound. With Jensen throwing strikes, pounding the zone, and clean defense behind him, we can be really good.”

For the second game in a row, the Tanagers did not make an error.

“That was a huge game for us and we knew what was at stake,” said Coach Heisinger. “Hopefully we can get gaining confidence and experience heading into the postseason.”

The Tanagers used a big first inning Tuesday evening at Prentis Park and never looked back as they shutout Wagner/Avon/Lake Andes 10-0 in the final regular season game of the high school season.

Vermillion would bat around the order in the top of the first, putting up eight runs in the first frame and all but ensuring a victory.

Willis Robertson got the start and the win, notching a shutout in five innings due to the run rule. He would only give up three hits during the game and struck out nine, including sitting down the first three batters in the top of the first in order.

Thoughts prior to Region 1 Tournament

Coach Heisinger was upbeat in the last week with postseason around the corner.

“The upcoming postseason that’s kind of what we have been working for all year and we have our guys geared up for that, so we are excited for it,” said Heisinger about next week’s region play.

With the post season looming, Vermillion will look to some key players and leaders to help guide the Tanagers to wins in the region tournament and a berth in the Class B State Tournament. “Guys like Nick Roob and Connor Saunders are two seniors that have played a lot of baseball for us, we kind of rely on them to be leaders,” said Heisinger. “Maybe some younger guys too – Jack Kratz, Willis Robertson, Jake Jensen, Reece Proefrock, TJ Tracy they have been huge for us this year. Those guys we will look to.”

The Tanagers will start off as the home team as they face Hanson-Aurora in the 3 vs 6 game in Elk Point on Monday, May 24 at 4:00pm. The #6 seed Hanson-Aurora finished the season with a 3-6 region record and 4-9 overall.

The Region 1 championship game will start at 8:30pm in Elk Point. All games will be at Todd Larsen Field at the high school. The winner earns a trip to the South Dakota High School State Baseball Tournament in Sioux Falls May 31 – June 1.