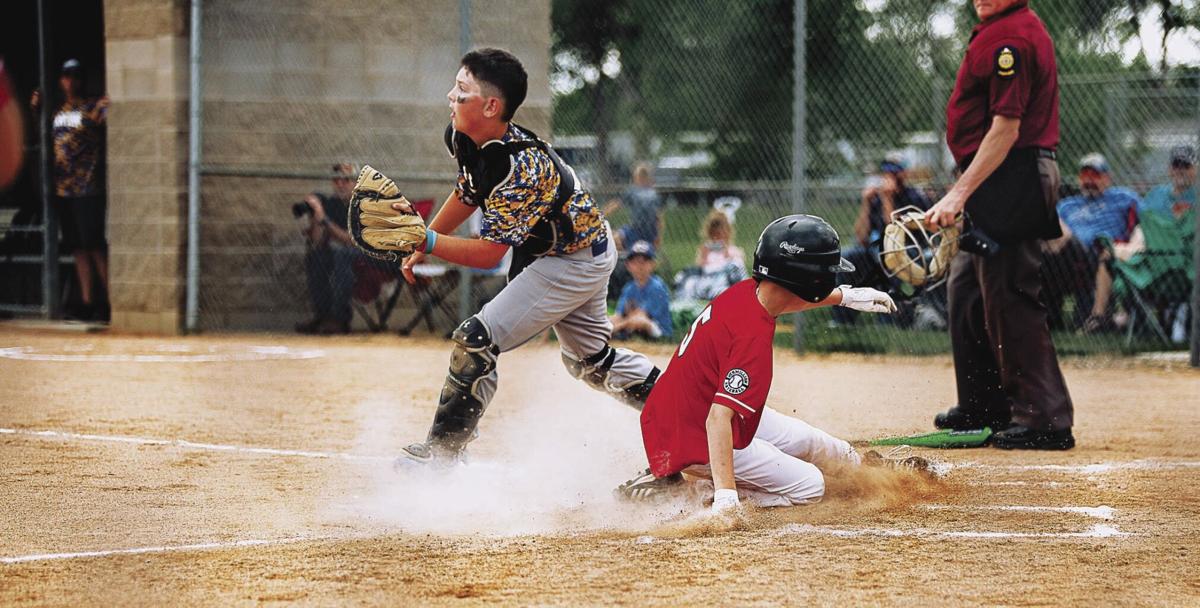 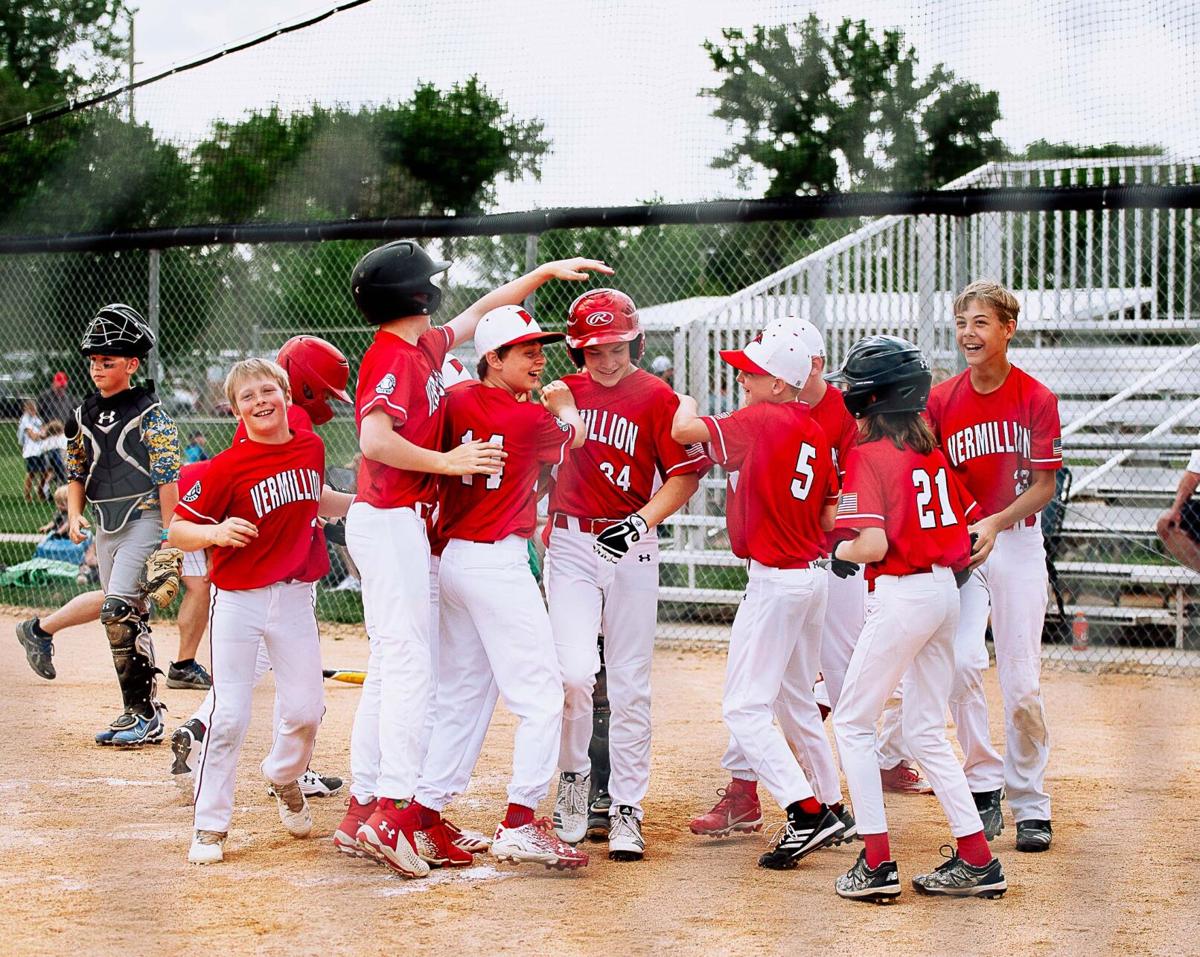 Tanagers Youth Baseball players celebrate on the field while competing this past week.

Tanagers Youth Baseball players celebrate on the field while competing this past week.

The Vermillion Tanagers 10 & 12 and under teams were busy on the diamond this past week, including hosting the Vermillion Classic at the USD Softball Complex on Saturday, May 22.

Both Yankton and Vermillion were held to three hits each, but it was Yankton that came away with the victory 6-3.

Vermillion’s Sam Vitt, Emerson Jarchow and Reid Reuvers would each smack a hit in the game. Vitt earned one RBI while Reuvers would grab two RBI.

Kellen Beach was the starting pitcher, going two innings with four strike-outs. He did not surrender a hit or an earned run.

Emerson Jarchow and Sam Vitt came on in relief of Beach. Vitt struck out two in one inning on the mound.

Kole Larson was two for two on the day including an RBI, but it wasn’t enough as Vermillion dropped game two to West Lyon 4-1.

Emerson Jarchow and Ben Green would each add a hit a piece for Vermillion.

Sam Vitt and Kellen Beach would again see time on the mound for Vermillion in a tough contest. Beach struck out three in two innings.

Vermillion fell behind early, thanks to one-run innings in the first three innings for LeMars as they dropped game three 12-2.

The young Tanagers actually outhit the visitors from western Iowa, but a few hits along with walks allowed LeMars to seal the game in the final two innings.

Ben Green and Grayson Jacobs were both two for two in the game at the plate.

Vermillion would use a laundry list of pitchers to try to keep the visitors from scoring but were unable to. Kole Larson, Maddox Standley, Sawyer Lee, Ben Green, Sam Sorenson, Reid Reuvers, and Luke Uhl would all get time on the mound. Standley, Lee, and Sorensen would each strike out two LeMars batters in their inning of work.

In what may be the fastest 12U game in recent memory, the visiting Cedar-Knox Navy squad topped Vermillion 1-0 in a thriller that lasted just under one hour and twenty minutes for the six inning affair last Thursday night in Vermillion.

Vermillion started strong on the mound, relying on the right arm of Ryan Vitt and he delivered. Vitt lasted the first three innings of the contest, only giving up one hit and facing only 10 batters. Of the nine other batters that did not earn a hit, Vitt struck them all out to record every out in those three innings.

After Vitt, Vermillion turned to Nolan Nygren and he too was excellent on the mound. Nygren would actually strike out a total of seven batters, one more than the required six outs in two innings due to a batter reaching on a dropped third strike. Nygren would not surrender a hit on the evening.

However, Cedar-Knox was able to scrape across one lone run in the top of the sixth inning and thanks to one more hit a few walks and take the game 1-0.

The visitor’s pitching was almost as good as the Tanagers. Vermillion would only manage four hits while Cedar-Knox only recorded two.

Cooper Reiser was hot at the plate, going 3-3 with three singles. Nygren collected the only other hit for Vermillion.

Strong pitching early and great hitting propelled the 12U Tanagers in game one of the classic 8-4 over the visitors from Canton.

Rylan Moran got the start and earned the win and he was sharp on the mound. Moran threw the first three innings, fanning eight and only allowed one hit.

Offensively, Vermillion would notch nine hits in the contest, led by Ryne Chapman. The centerfielder for Vermillion was 1-2 with his only hit being a blast over the left field fence at the USD Softball field that cleared the top of the fence and landed far behind it. Chapman’s home run plated three runs with that swing of the bat.

Teddy Nesmith was 2-2 on the day and earned an RBI.

West Lyon would use big innings in the first and second and run away from Vermillion by a score of 13-8.

Ryan Vitt and Duke Job were the other Tanagers to manage a hit against a good West Lyon team. Both players were credited with a hit each.

Nesmith, Nygren and Chapman all saw time on the mound for Vermillion as they combined to strike out ten West Lyon batters throughout the game.

The visitors from Bon Homme would scatter 11 hits in the afternoon game, and use big innings in their half of the fourth and fifth innings to down Vermillion 11-5.

Nolan Nygren, Cooper Reiser, and Ryne Chapman led Vermillion again offensively with two hits. Chapman was two for three with a triple and an RBI.

Padraig Fulton smacked a line drive to the outfield late in the game and hustled around the base paths, earning an inside the park home run during the play.

Karston Jacobson started on the mound, allowing only one Bon Homme hit and one earned run. Rylan Moran and Ryne Chapman finished off the game pitching for Vermillion.