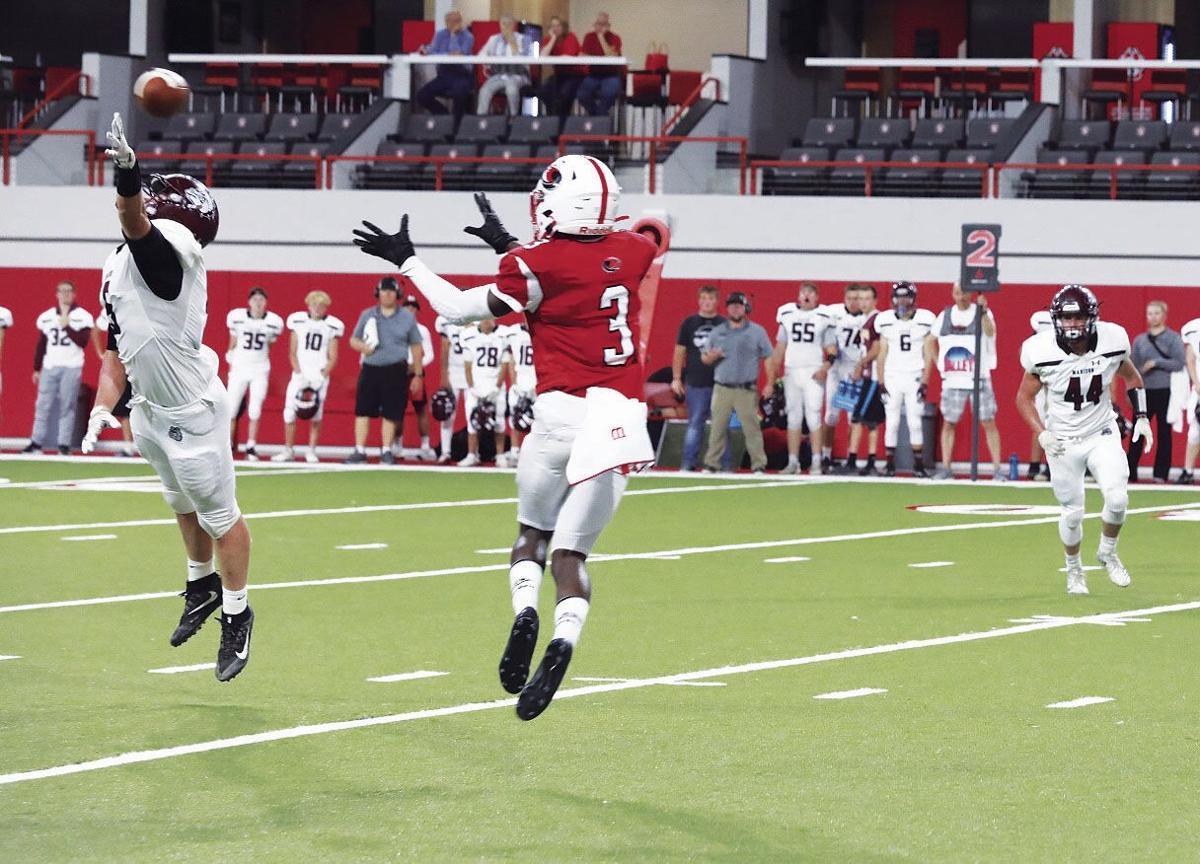 The Vermillion Tanagers' Mehki Sheffield (3) leaps to catch a pass for a big offensive during Friday's football action against Madison in the DakotaDome. 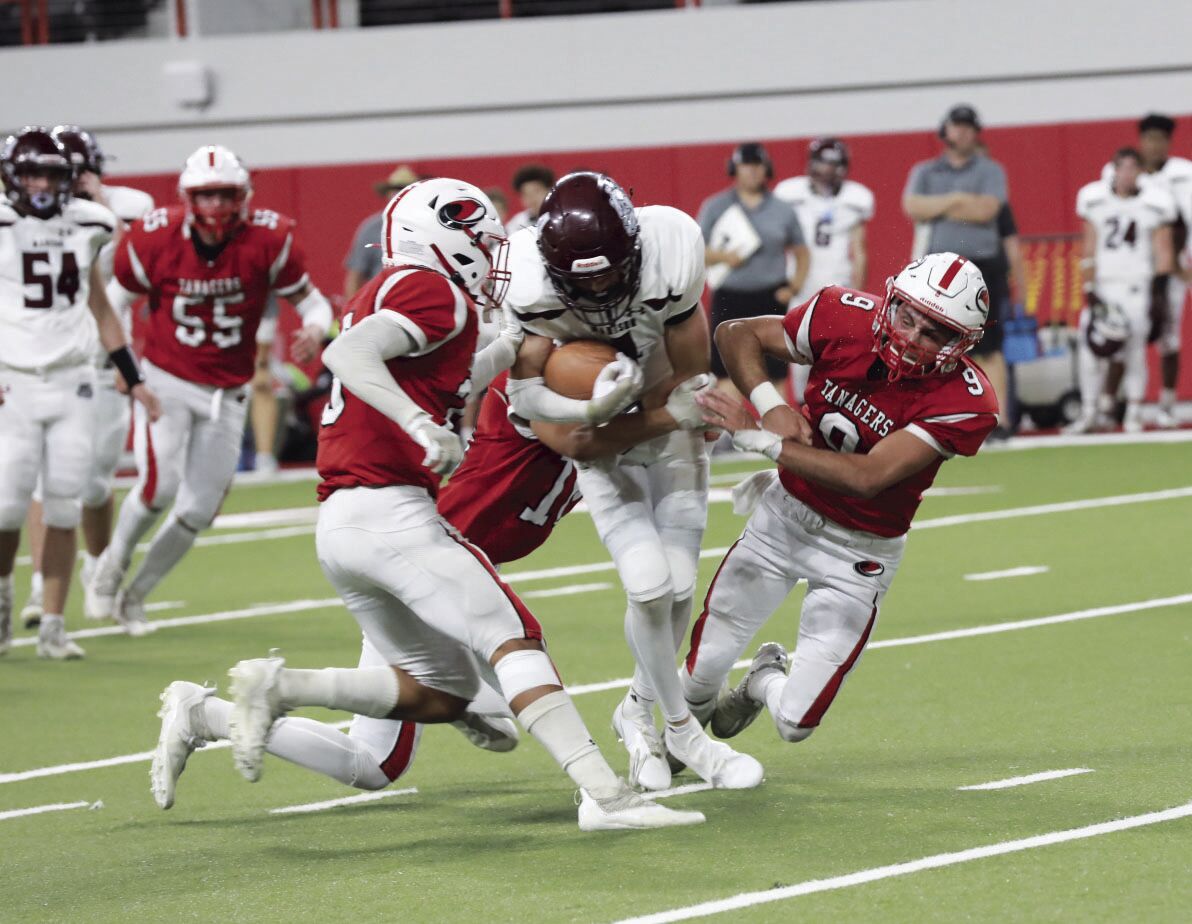 Vermillion’s Jeremy Crowe, Andrew Comes and Jack Kratz (9) stop an unidentified Madison player from gaining ground during Friday’s football action between the Tanagers and the Bulldogs Friday night in the DakotaDome.

The Vermillion Tanagers' Mehki Sheffield (3) leaps to catch a pass for a big offensive during Friday's football action against Madison in the DakotaDome.

Vermillion’s Jeremy Crowe, Andrew Comes and Jack Kratz (9) stop an unidentified Madison player from gaining ground during Friday’s football action between the Tanagers and the Bulldogs Friday night in the DakotaDome.

There’s good news and bad news to report about last Friday’s football matchup between the Vermillion Tanagers and the Madison Bulldogs.

First, the bad news: Some unfortunate plays early in the game allowed Madison to quickly score and soon the Tanagers were trailing badly.

The good news: The Tanagers appeared to never lose their competitive spirit throughout the game, even following those times when things didn’t go their way on the gridiron.

The number two ranked Bulldogs were eventually victorious, winning by a score of 37-26.

“The kids showed a lot of grit and belief in themselves in digging out of a lead that we gave away. They certainly responded and did some really nice things from the middle of the second quarter on,” coach Tom O’Boyle said.

The Bulldogs blocked a Tanagers’ punt and recovered it on the two-yard line early in the first quarter and quickly scored a touchdown. After a poor showing the next time Vermillion’s offense had the ball, Madison was in good position to score again.

“To make a long story short, we were down 14-0 at the end of the first quarter and 21-0 with seven minutes to go in the second quarter,” the coach said. “Our defense forced two punts and we had a big play for a 56-yard touchdown pass from Ty Hertz to Zoan Robinson. On the next series of downs, Mehki Sheffield intercepted a pass and returned it 33 yards for a touchdown, so we were right back in the game.

“It was 21-14 and we did a great job of believing in ourselves and competing from that point on,” coach O’Boyle said. “Unfortunately, we ended up losing the game 37-26, but I really believe we grew up a little bit. We came away stinging from the loss but also with the understanding that we can be a contender each and every Friday night and our opponents certainly know they are going to get a quality opponent when they play us.”

The Tanagers’ performance on the field, their refusal to hang their heads when things didn’t go their way early in the game is reflective of the support each team member receives from their parents, the coach said.

“These are parents that are very prideful Vermillion folks and our kids bring that to practice every day,” coach O’Boyle said. “Our kids show that they have great heart, great belief. They support one another and that’s part of who we are. We’re going to find someone to pick up, find someone to support and that’s kind of how we play. It’s a lot of fun to be a part of this and as a coaching staff, we’re the luckiest people in the world. We get to work with these young men every day and get to see them smile and grow and work.”

The coach admits that football can be a cruel sport.

Friday’s homecoming game was played in the DakotaDome and the atmosphere was electric, coach O’Boyle said.

“It was so much fun and we’re very thankful for the people coming out and supporting us,” he said. “We’re going to make the Dome a fun place to be and we’re going to try to be as difficult a road opponent as we can for people that we have to travel to to play.”

The Tanagers’ defense was led Friday by the team’s two linebackers, Jack Kratz, with 17 tackles and Nick Sorensen with 16 tackles.

“We had two sacks for loss, we had an interception return for a touchdown by Mehki Sheffield – we had big plays in the game by the defense. Reece Proefrock had a sack for a 13-yard loss and Jack Kratz had a sack for a 6-yard loss,” the coach said. “With those plays, we did a good job of getting our defense off the field and giving our offense back on the field for a chance.

“It was an exciting game to be a part of. You certainly want to win those games, but you have to play in these games before you understand that every play matters and you have to take care of business,” he said. “We can’t give the first 17 minutes of a football game away and be successful.”

The Tanagers will be challenged this Friday when they travel to face number one-ranked Canton.

“Canton has a very deliberate football program,” coach O’Boyle said. “They run a very fundamentally sound, very good offense. They come at you … their kids make few mistakes, so defensively, we’re going to have attention to detail.”

It will be important for the Vermillion defense to force Canton’s offense to face long first-down situations and the coach admitted he must do better at having a plan that gives his team a fast start in the first and second quarters.

“We need to move the football, we need to put in the endzone or kick it through the uprights,” he said. “The challenge of Canton is they’re a good program; we feel we’re a good program. These are games you want to play in. We want to be recognized as a team that’s going to be in conversations this year.”