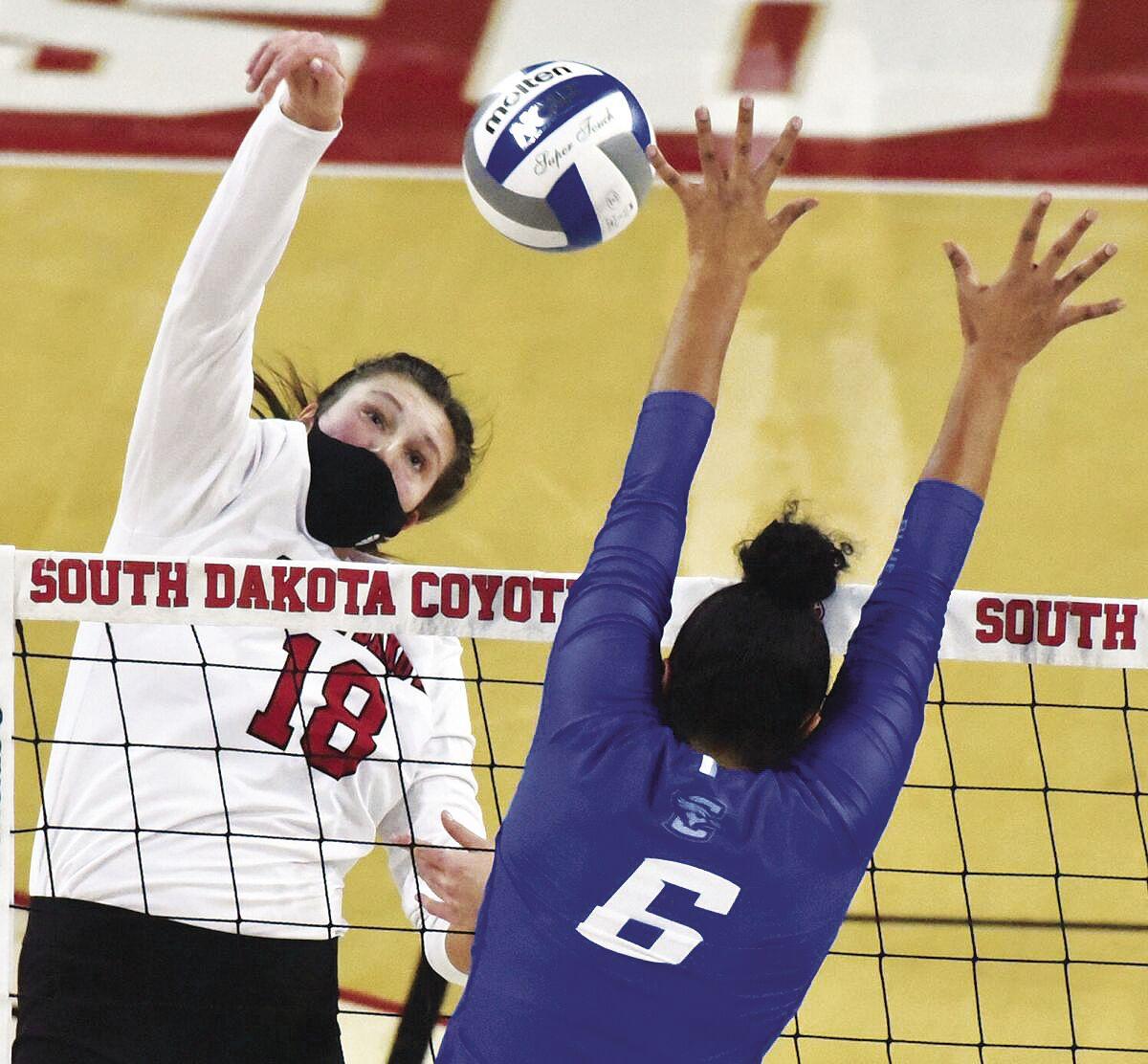 South Dakota’s Maddie Wiedenfeld attacks against the block of Creighton’s Keeley Davis during their volleyball match. 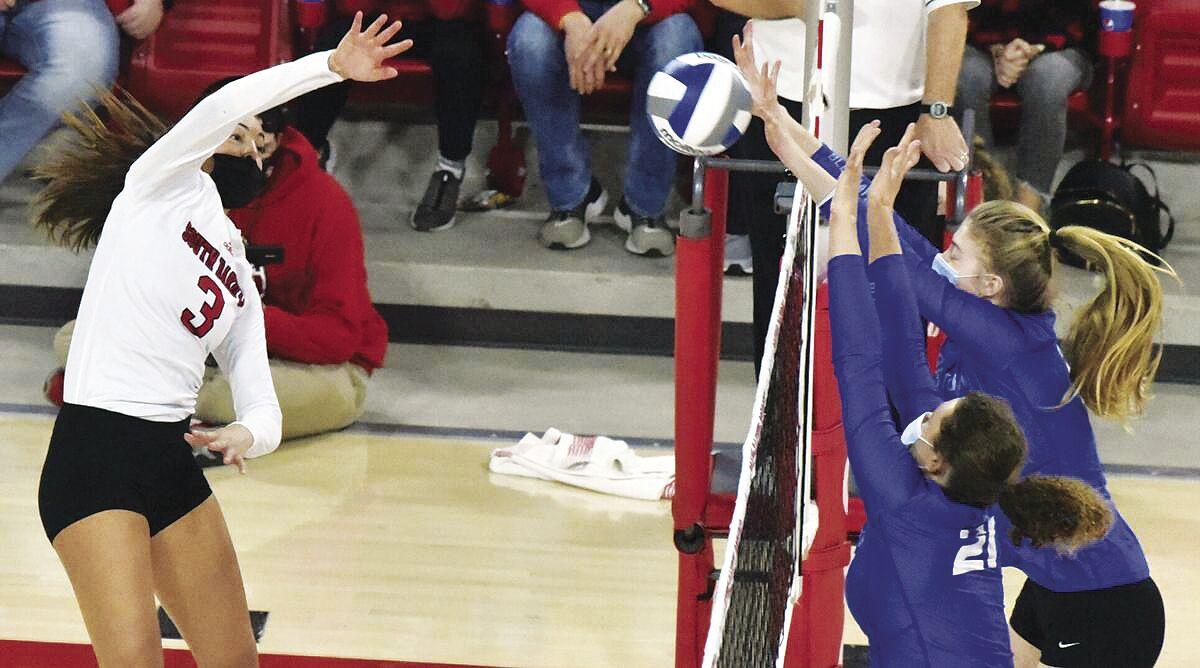 South Dakota’s Sami Slaughter attacks against a pair of Creighton defenders during their volleyball match on Sunday at the Sanford Coyote Sports Center.

South Dakota’s Maddie Wiedenfeld attacks against the block of Creighton’s Keeley Davis during their volleyball match.

South Dakota’s Sami Slaughter attacks against a pair of Creighton defenders during their volleyball match on Sunday at the Sanford Coyote Sports Center.

VERMILLION — Maybe the word ‘upset’ should stop being used.

That was part of a text message Leanne Williamson received after her South Dakota volleyball team rallied from an 0-2 hole to upset — or, defeated — No. 14 Creighton last Friday night down in Omaha, Nebraska.

In other words, maybe Williamson’s program is in a position where a victory like that shouldn’t come as a surprise.

“They feel like our program is at that place where this is what we expect,” Williamson said, recalling the message.

“I do think, within our program, we absolutely believe that.”

Two days later, her squad was back on the floor — this time on its home floor at the Sanford Coyote Sports Center — against that same nationally-ranked Creighton team.

This time, however, the opposite result happened.

As disappointed as USD was that it let another potential upset slip away, it at least came away knowing that Friday’s win wasn’t a ‘fluke,’ according to Williamson.

“I have full trust that our team can have that success that we want to have every single day, regardless of who’s on the other side of the net, and this absolutely proves that,” she said.

Prior to the weekend, USD (1-3) had never beaten a ranked Division I team and had never hosted a ranked opponent during its D-I existence.

Fatigue, however, played a role in the Coyotes coming up a bit short in an even more historic weekend, according to sophomore Elizabeth Juhnke.

“A five-set match two days ago; it’s a battle, and then another one today,” said Juhnke, who recorded 23 kills. “We got fatigued.

“Our legs were a little tired; more tired than we thought they’d be, and we weren’t getting our feet on the floor.”

It was especially the case near the end of the fourth set, according to USD senior Sami Slaughter.

“I felt we looked a little more tired,” said Slaughter, who added 15 kills. “We crumbled in the fourth set, even though we were up. It looked like we were already defeated.”

In a cruel dose of deja vu, it was the exact same situation Creighton had been in last Friday: The Bluejays built a 2-0 lead on their home floor but watched the opponent reel off three straight wins to celebrate.

As the momentum reeled away from the Coyotes on Sunday, fatigue set in in three fashions, Williamson said: Physically, emotionally and mentally.

“Physically, I think our bodies were tired, but I really think it came down to the mentality of it when we were physically tired,” she said.

The Coyotes were in system — to borrow a volleyball phrase — right out of the gate and the ‘Jays were not. Creighton committed seven attack errors and four serving errors, and USD hit .538 on the way to an opening victory.

Creighton’s defense tightened in the second half, but its offense was still out of sync (eight more errors) and the Coyotes captured a victory to go up 2-0.

The Bluejays then avoided the sweep with a 25-20 victory in set three and then forced a deciding fifth set with a 25-23 win in set four.

Creighton scored five straight points to take a commanding 7-4 lead in set five and later scored the final seven points of the set.

Creighton (3-1), which has been the Big East Conference regular season champion each of the last six seasons, got 20 kills from Keeley Davis and 15 kills from Jaela Zimmerman.

For the Coyotes, they came oh so close to a 2-0 weekend against a nationally-ranked opponent — and one they met back in the 2018 NCAA Tournament.

“We’re obviously disappointed in the loss, but this was a huge step in the right direction for this team,” Williamson said.

The split with the Bluejays shows that the Coyotes were able to rebound from an 0-2 start to the season with a pair of losses the previous weekend to Wichita State and Missouri State.

“It just shows how good we are and how well we can compete as a team,” Slaughter said.

“I think it shows a lot of resilience and grit from us,” she said.

“We worked super hard, and we know we can do that, and that was fun to show everyone else we could.”