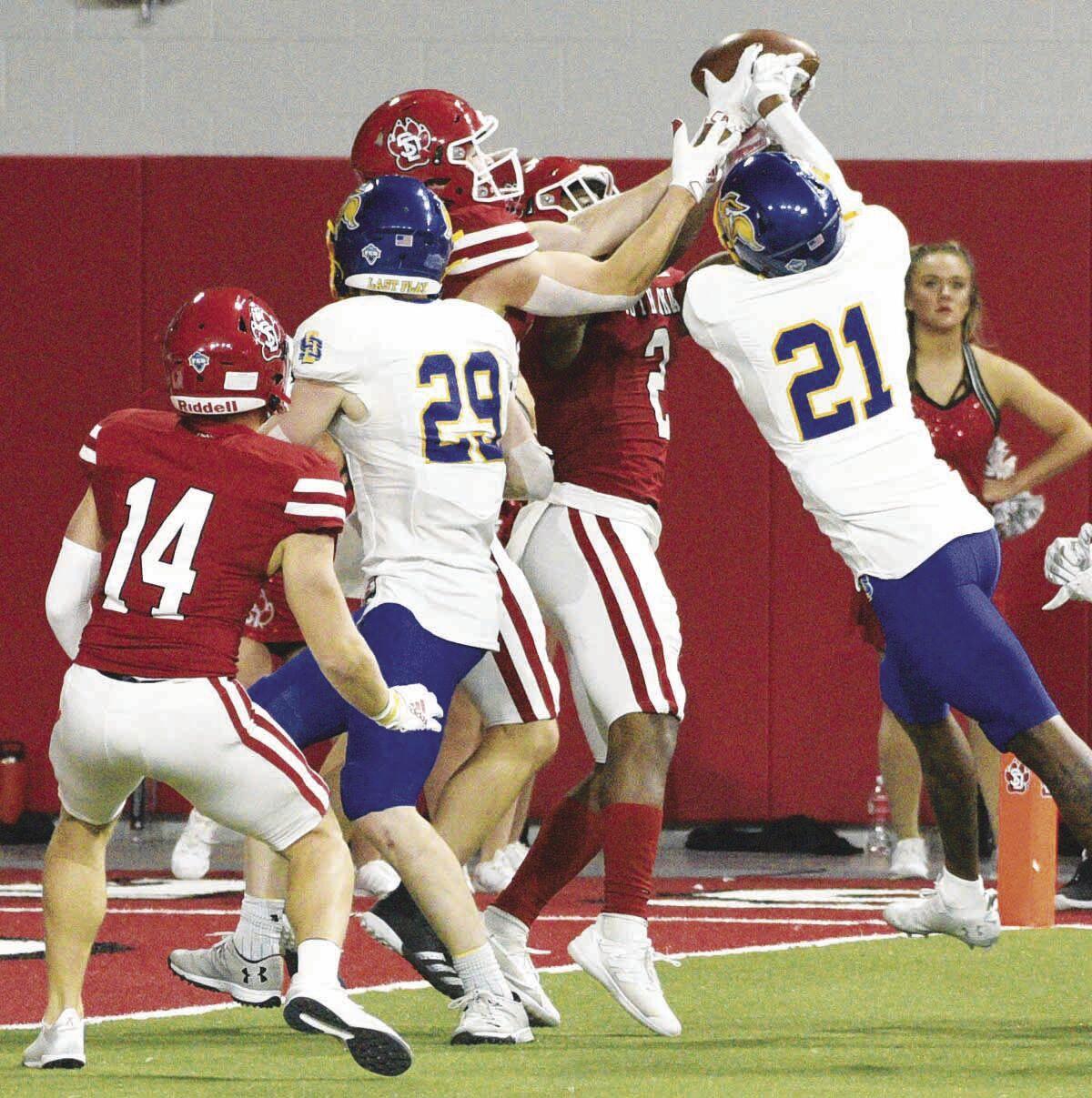 South Dakota's Jeremiah Webb, 2, and South Dakota State's Don Gardner go for the ball on the final play of their Missouri Valley Football Conference game Saturday at the DakotaDome in Vermillion. Webb came down with the ball and fell into the endzone, giving the Coyotes a 23-20 victory.

South Dakota running back Travis Theis runs through a lane in the South Dakota State defense during their Missouri Valley Football Conference game Saturday at the DakotaDome in Vermillion.

South Dakota's Jeremiah Webb, 2, and South Dakota State's Don Gardner go for the ball on the final play of their Missouri Valley Football Conference game Saturday at the DakotaDome in Vermillion. Webb came down with the ball and fell into the endzone, giving the Coyotes a 23-20 victory.

South Dakota running back Travis Theis runs through a lane in the South Dakota State defense during their Missouri Valley Football Conference game Saturday at the DakotaDome in Vermillion.

VERMILLION — The University of South Dakota football team trailed 20-17 with eight seconds left to play and the Jackrabbits had a fourth down decision to make.

The Jackrabbits decided to try and scramble and heave a pass to run out the clock, but there was one second left on the clock, which brought USD’s offense back out onto the field.

“We talked about it on the sideline, ‘hey, we’re going to go hail mary here, try to get to the end zone, Carson stay alive,’” quarterback Carson Camp said.

Camp scrambled as the clock hit zero and tried to avoid the Jackrabbit pressure. Camp loaded up and heaved a pass up towards the end zone. After a scramble for the ball, redshirt freshman Jeremiah Webb grabbed a hold of the pass and fell into the end zone. The Coyotes walked off the South Dakota State Jackrabbits 23-20.

“It was pretty slow motion,” Webb said. “Ball went up, bounced off a couple defenders hands, I saw it the whole way and just happened to grab it out of the air.”

Webb, who hadn’t seen much action this season, stepped in to record six receptions for 153 yards and the touchdown at the end of the game.

“Right before the game we knew (Kody) Case was going to be out,” Webb said. “Everyone was telling me, when your number is called it’s time to step up."

In the first quarter, Cole Frahm converted a field goal off a short field to give SDSU an early 3-0 lead. Mason Lorber missed two field goals in the opening half for the Coyotes.

In the second quarter, Chris Oladokun scrambled and converted a 49-yard pass to Jaxon Janke to set up a Zach Heins touchdown catch to give the Jackrabbits a 10-0 lead.

Caleb Vander Esch caught an 18-yard touchdown from Camp with 1:16 to play in the half. The Jackrabbits led 10-7 at the break.

Frahm added a field goal in the third quarter to give SDSU a 13-7 lead. Nate Thomas plunged in from 13-yards out to give USD their first lead 14-13. Lorber added a fourth quarter field goal and USD led 17-13.

Camp took a shot on the first play of the game where he threw an interception to DyShawn Gales and had to come out of the game for a drive due to his shoulder injury. Camp also subbed out periodically after taking hits.

The Coyotes fell behind after Pierre Strong Jr. recorded a five-yard touchdown with 6:10 to play. The Coyote offense moved the ball into SDSU territory on the ensuing possession, but on a fourth and inches, Travis Theis was stuffed giving SDSU the ball on their own 28-yard line.

The Jackrabbits got a first down and ran the clock down to one second, giving the Coyote their final opportunity.

“Obviously a unique way to end the game, but as crazy as that play was I really thought our kids deserve to win that football game,” USD head coach Bob Nielson said. “They played hard, played physical football.”

“The defense showed they can go toe-to-toe with a really good offensive football team,” Nielson said. “They’ve got great experience, great talent, and we knew they were going to move the football some. What we had to do going in was take away the big hitter runs that Strong is so good at and I think we did a decent job of that today.”

The Coyotes now make the trip to Fargo, North Dakota for their regular season finale. The Coyotes have the chance to play for a conference title thanks to Saturday’s heroics.