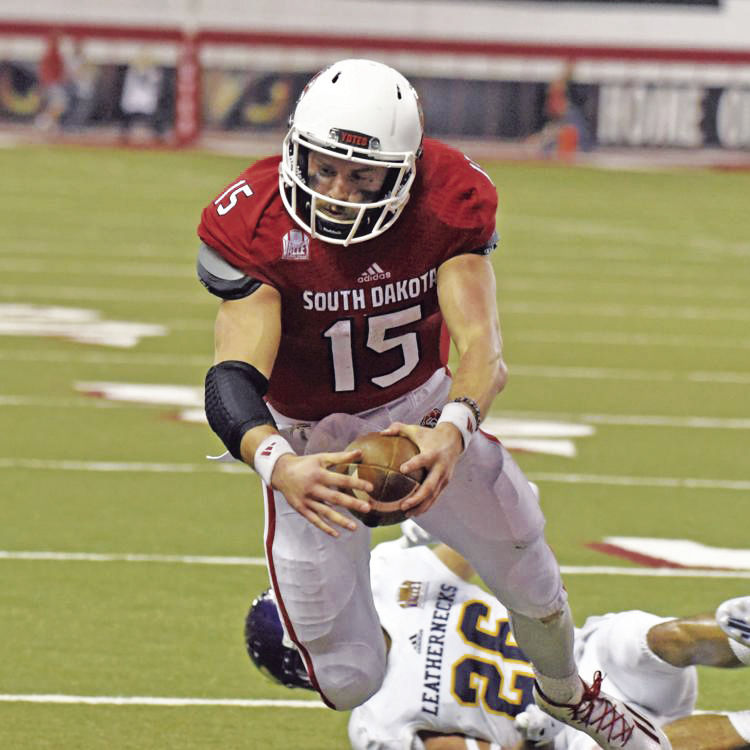 Former South Dakota quarterback Chris Streveler, pictured during the 2018 season, has been named the Sports Celebrity of the Year by the South Dakota Sportswriters Association. 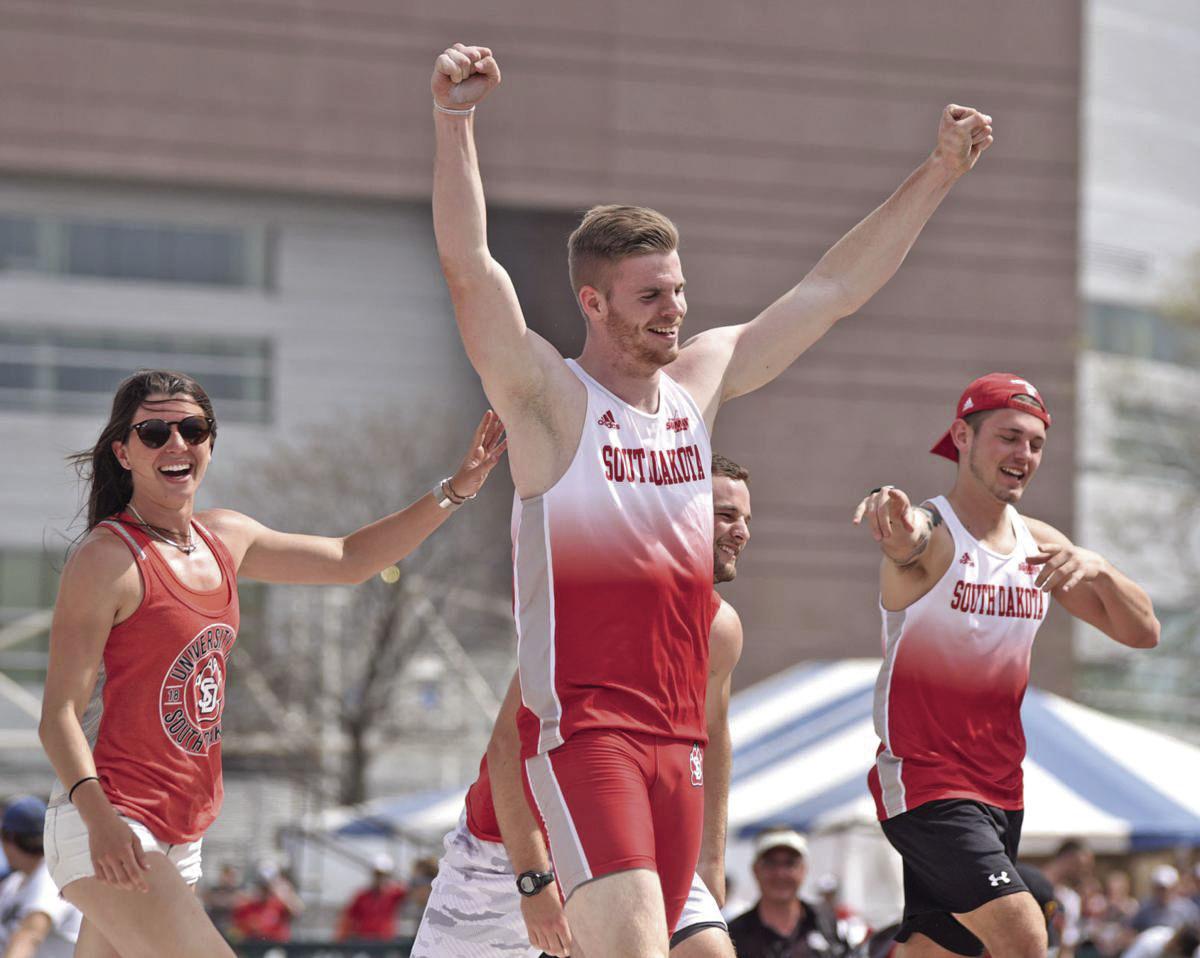 South Dakota pole vaulter Chris Nilsen has won two NCAA Division I titles during his career with the Coyotes. 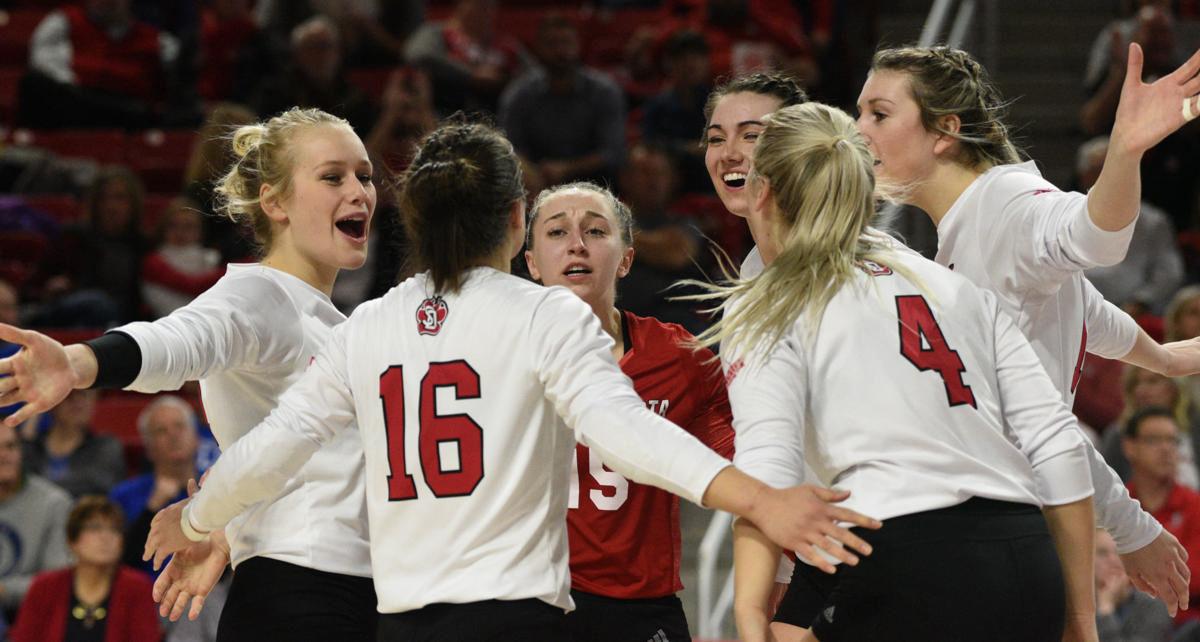 South Dakota players celebrate a point during the Coyotes' seminal matchup against Tulsa in the National Invitational Volleyball Championship held last month in the Sanford Coyote Sports Center in Vermillion.

Former South Dakota quarterback Chris Streveler, pictured during the 2018 season, has been named the Sports Celebrity of the Year by the South Dakota Sportswriters Association.

South Dakota pole vaulter Chris Nilsen has won two NCAA Division I titles during his career with the Coyotes.

South Dakota players celebrate a point during the Coyotes' seminal matchup against Tulsa in the National Invitational Volleyball Championship held last month in the Sanford Coyote Sports Center in Vermillion.

A former University of South Dakota Coyote who became the toast of Winnipeg has been selected as the state’s Sports Celebrity of the Year, as chosen by the South Dakota Sportswriters Association.

Quarterback Chris Streveler, who helped the Coyotes to their first-ever FCS post-season berth, was a dual-threat weapon as the Winnipeg Blue Bombers won their first Grey Cup since 1990. In his second season with the Canadian Football League squad, Streveler posted 1,564 yards passing and 726 yards rushing.

Sharing time under center, he completed all three of his passes during the Grey Cup final (for 39 yards and a touchdown), and added nine carries for 30 yards rushing.

The selection was one of several made by the SDSWA, an annual tradition since 1954. Here are the other selections:

Krajewski, a 14-year-old from Yankton, is one of the top Para-Badminton players in the world, ranking eighth in singles. He ranks third in men’s doubles (with Vitor Tavares of Brazil) and 13th in mixed doubles (with Katherine Valli of USA).

He is in contention to represent the U.S. in the 2020 Paralympics in Tokyo, earning top-three finishes in several international events this past year.

Lindner, a Sioux Falls native that attended Harrisburg High School, was a key piece in the University of Minnesota’s first trip to the Women’s College World Series in May.

She started 40 times and played in 50 of the Gophers’ 60 games as a freshman and hit .205 with three home runs and nine RBIs, while regularly playing center field in the NCAA tournament run.

In their eighth season in Aberdeen, the Wings claimed the NAHL Championship with a 2-1 win over Fairbanks. It was the best season in team history, logging a 97-point season with a 47-10-3 record and scoring 255 goals.

Goaltender Matt Vernon was the championship round MVP, allowing one goal on 58 shots.

Nilsen, a junior at the University of South Dakota, stayed at the top of the nation’s pole vaulting podiums, winning the NCAA Division I Outdoor Championship for a second time with a jump of 19 feet, 6 inches.

It was his third national title overall, as Nilsen also took second at the NCAA indoor meet. Nilsen won the Pan-American championship for the United States and he claimed the Summit League’s indoor and outdoor pole vaulting titles, running his total of conference championships to five.

He was seventh at the U.S. Outdoor Championships in Des Moines, Iowa in July.

This marks the second time Nilsen has been honored by the SDSWA, adding to a selection in 2017.

In his seventh season at the Vikings’ coach, Olszewski was named NSIC Coach of the Year for a second time, helping Augie to a 9-3 season after the team was picked to finish sixth overall in the preseason.

He is the only coach in school history to lead the Vikings to multiple nine-win seasons.

The Wolves finished the 2018-19 season with a 26-7 record, including a post-season berth. Northern was upended by Southeastern Oklahoma State in the opening round of the Central Region Tournament.

After the season, head coach Paul Sather stepped down to accept the head coaching position at the University of North Dakota. Saul Phillips has taken over the program.

This marks the fourth time that the Wolves have been honored as the state’s team of the year, joining selections in 1959, 1993 and 2006.

A senior from Hartford, Lamer completed the multi-event double, winning the NAIA indoor pentathlon in Brookings in February and then the NAIA outdoor heptathlon in May in Alabama.

Lamer’s story got into the spotlight when she was able to successfully appeal her way into the heptathlon field after her coach missed a registration deadline to have her participate, despite being the overwhelming national favorite in the event. She was named the NAIA’s Field Athlete of the year for both the indoor and outdoor seasons and is the first DWU track athlete to win a national championship.

In July, Lamer graduate transferred to the University of South Dakota, where she intends to use her final year of collegiate eligibility.

Johnston led South Dakota State to its best season in Division I history, taking the Jackrabbits to the NCAA Tournament Sweet 16 for the first time.

It marks the ninth time SDSU has gone to the NCAAs under Johnston in a 28-7 season, while Johnston has now climbed up to 476 career wins in 19 years at SDSU, accounting for nearly half of the program’s 1,000-plus victories.

The Coyote volleyball program recorded its best season as a NCAA Division I program, going 31-3 with a perfect 16-0 regular season run through the Summit League.

Though a loss to Omaha in the semifinals of the Summit League Tournament derailed the Coyotes’ bid to make a second straight NCAA Tournament appearance, USD responded with a run in the National Invitational Volleyball Championship. The Coyotes advanced to the final before losing to Atlantic Coast Conference power Georgia Tech in front of a USD home volleyball record crowd of 2,431.

Hutmacher continued his utter domination in Class A’s 285-pound class, winning a third straight state championship and running his win streak to 124 straight matches, capped with a nine-second pin in the title match. His success on the mat has continued as a senior, running his current pin streak to 46 straight, surpassing the previous state record of 44. (Canton’s Kellyn March has also passed the old mark, and is currently at 48 straight pins.)

Hutmacher was also named to the Class 11B all-state football team for a third time, after he posted 88 tackles and four quarterback sacks this past fall. In June, he verbally committed to play football at Nebraska.

This marks the second straight year that Hutmacher has received the award.

Already among the state’s top all-time football coaches with 240-plus wins, Van Leur led his Seahawks to their first Class 11B state championship.

It is his seventh state championship under Van Leur’s leadership in his 37 years as Seahawks’ coach, led this time by five Class 11B all-state players in a 12-0 undefeated season, the third perfect campaign in his tenure.

Dominant from start to finish, the Governors cruised to a 12-0 record and their third straight Class 11AA state championship.

That came on the strength of 519 yards of total offense per game, while averaging 59.2 points per game and scoring 710 points for the season.

Tietz continued her notable high school athletic career by placing in four events at the state Class AA track and field meet in May.

Aaker coached the Warriors to the only perfect season in South Dakota high school basketball in 2018-19 at 24-0, which was capped with a 60-53 win over previously undefeated West Central in the Class A state championship game.

The Wildcats finished the season with a 41-0 record, completing a perfect year for the program’s 11th state championship with a three-set sweep over Faulkton Area.