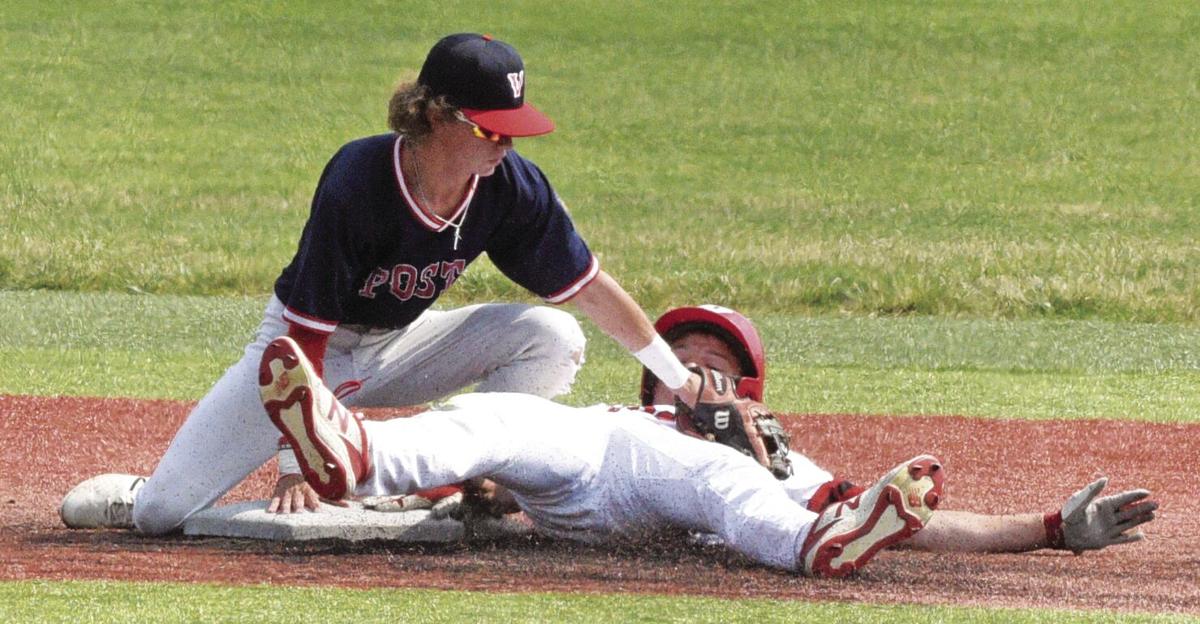 Yankton baserunner Dylan Prouty gets his hand on second base ahead of the tag attempt by Vermillion's Willis Robertson during their American Legion baseball matchup on Tuesday at Yankton's Riverside Field at Bob Tereshinski Stadium. 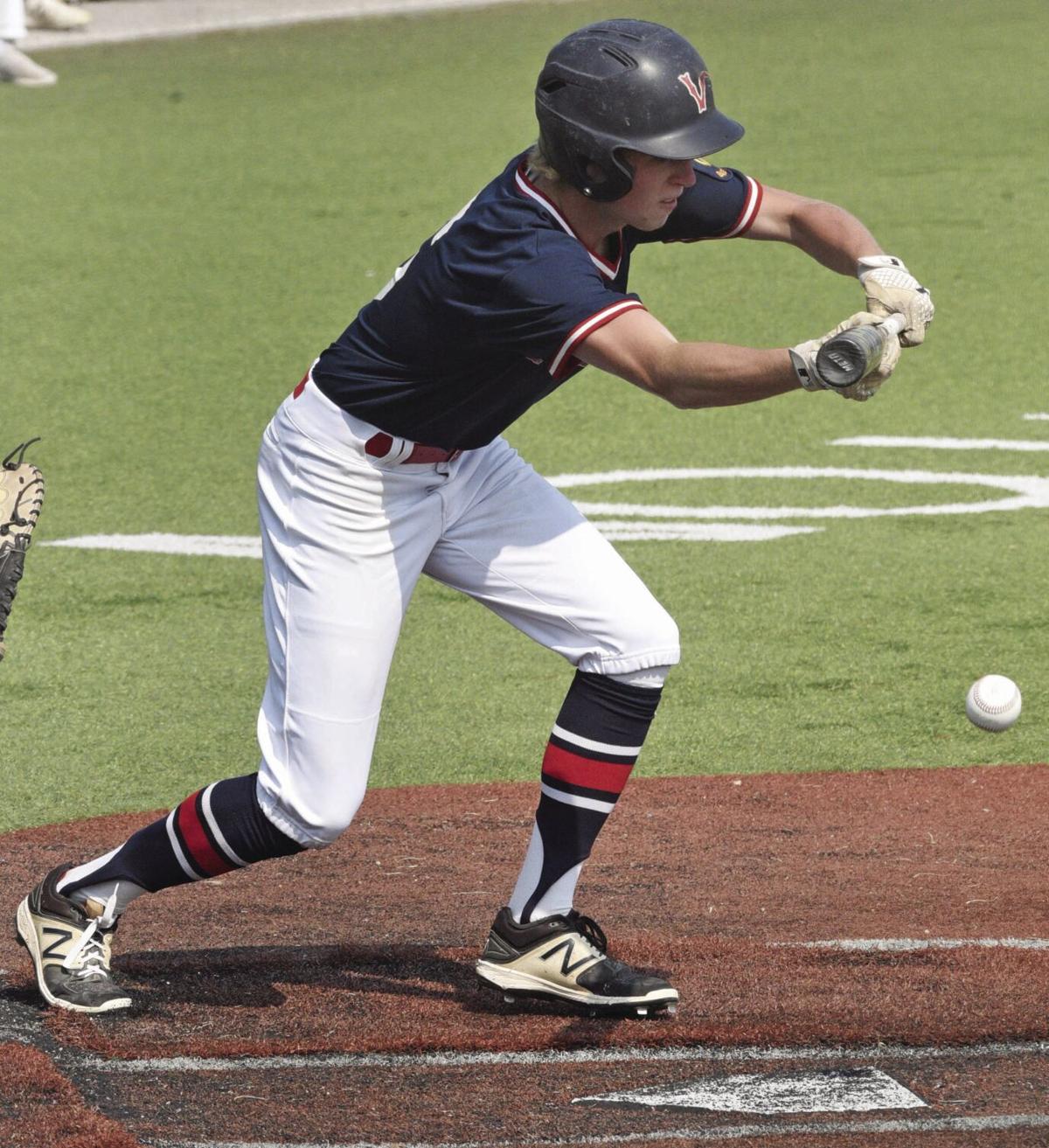 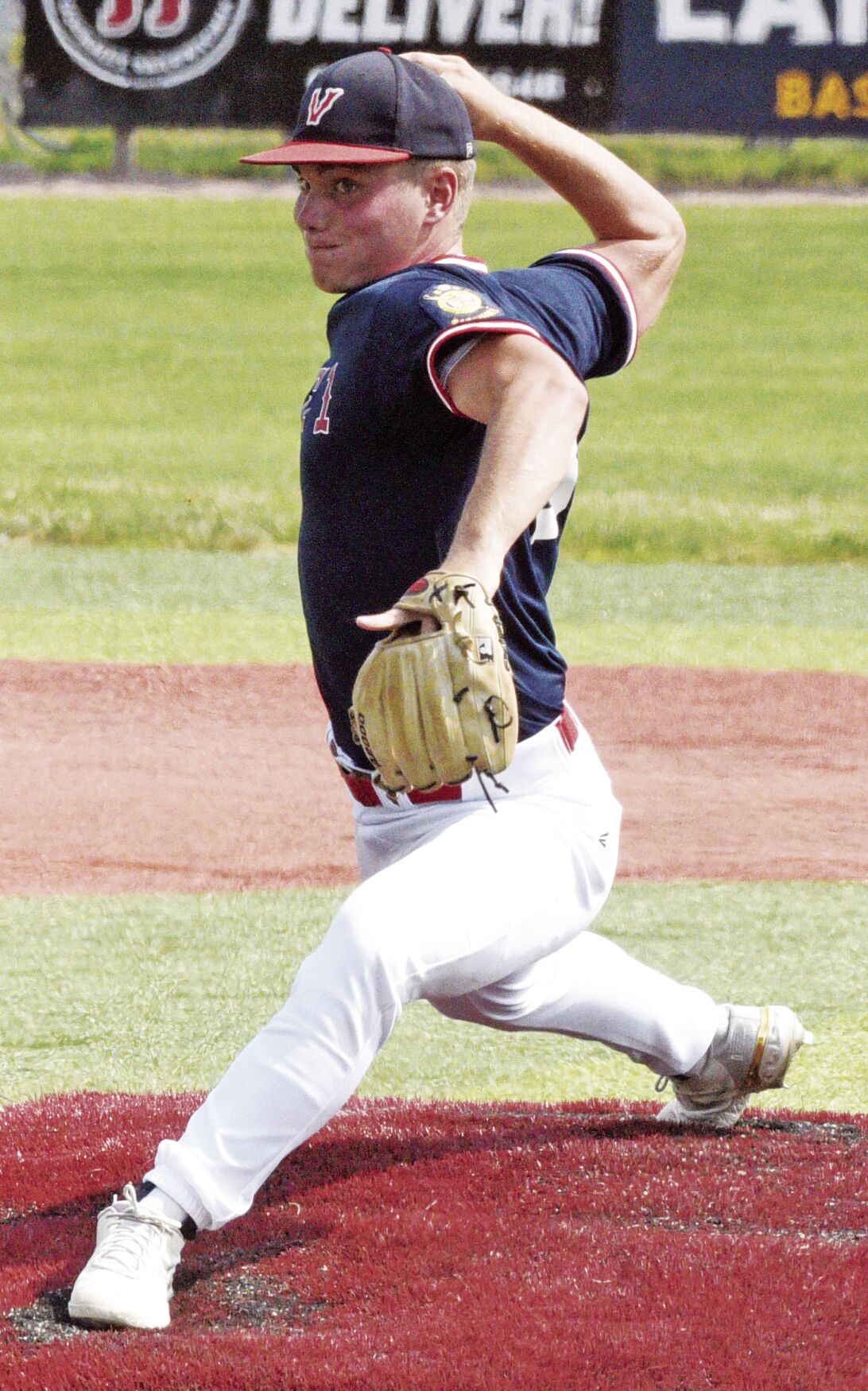 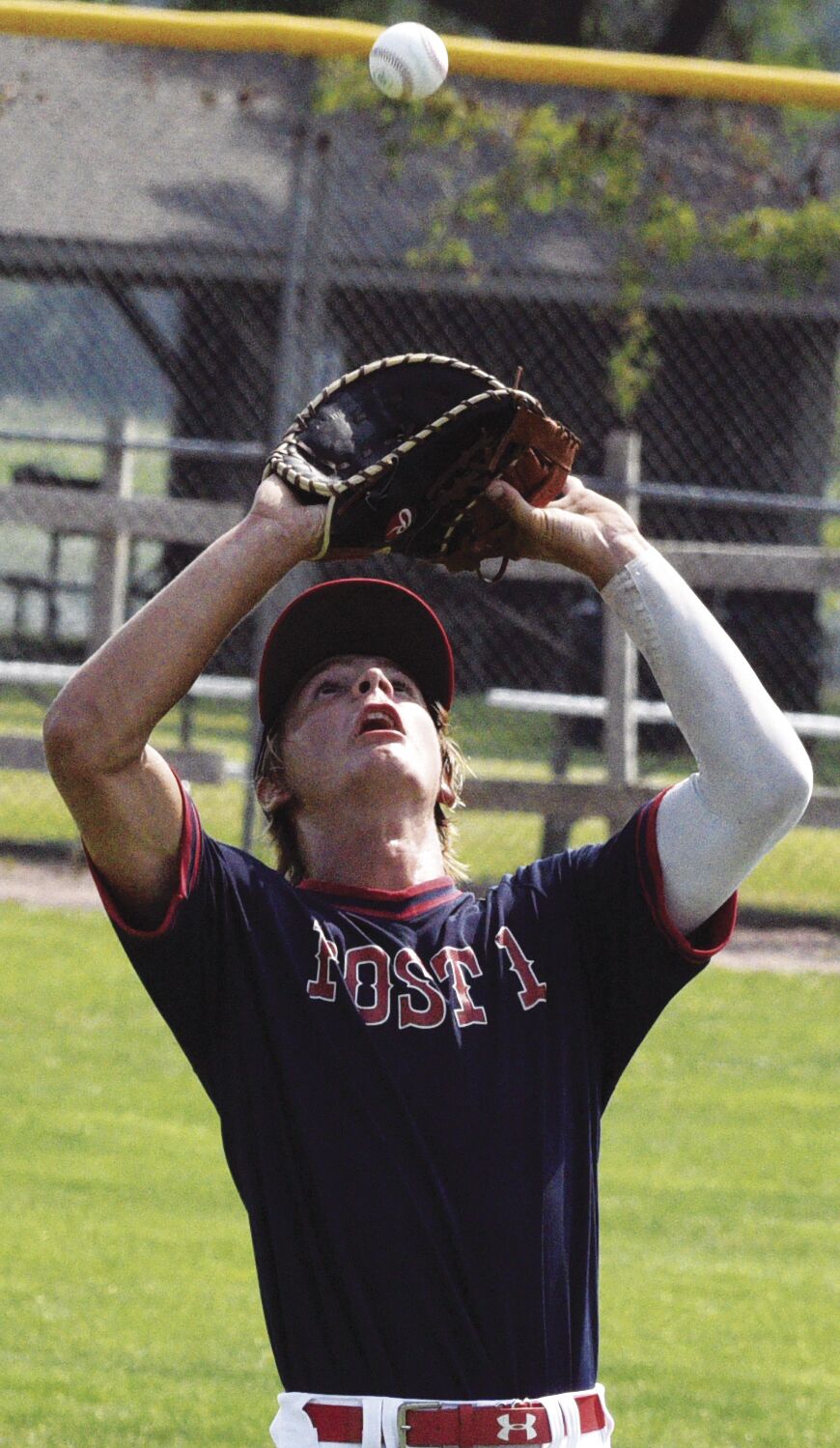 Vermillion first baseman Clayton Sorensen camps under a pop-up, catching it for an out during his team's American Legion baseball matchup against Yankton, Tuesday at Yankton's Riverside Field at Bob Tereshinski Stadium. 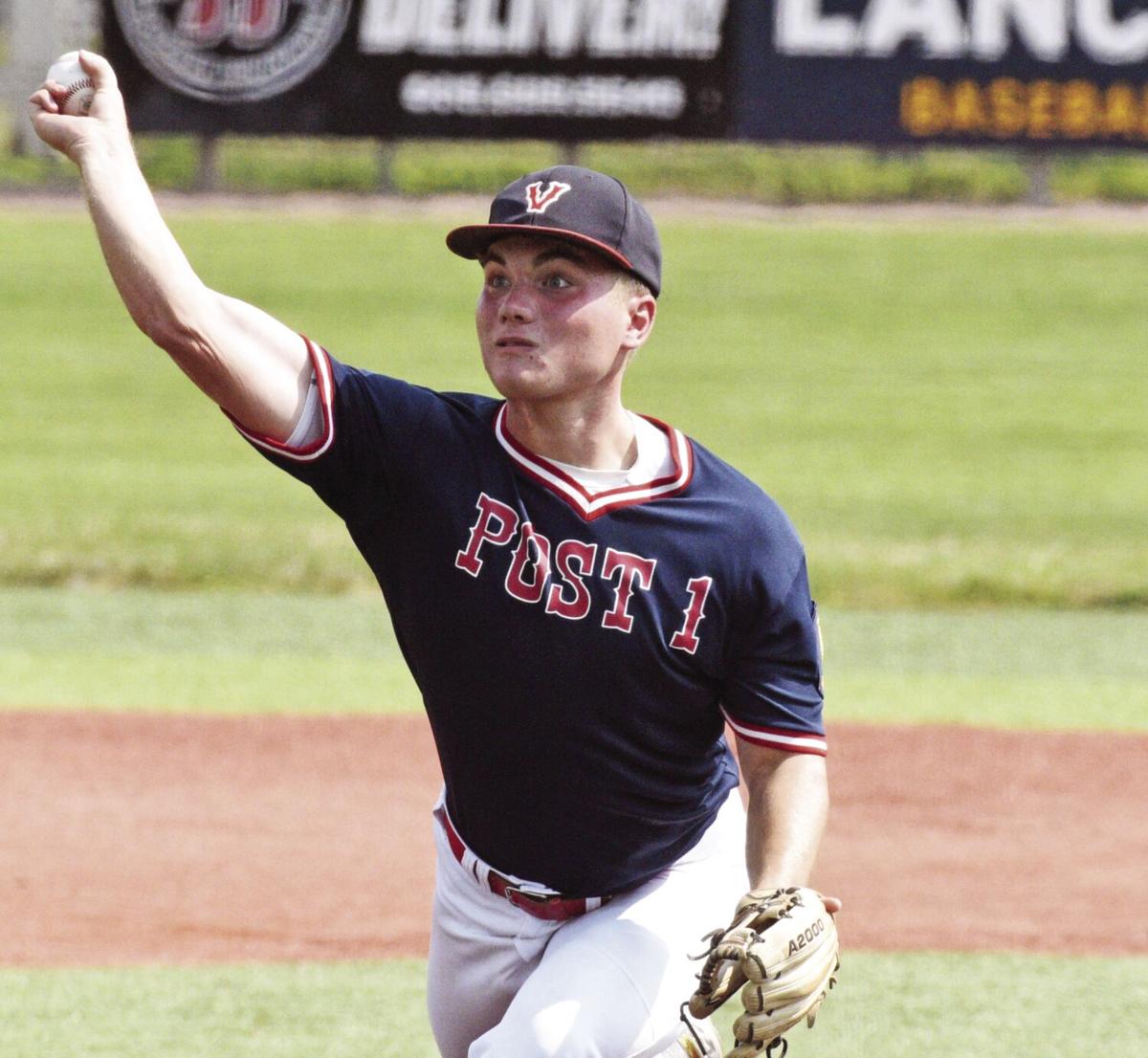 Yankton baserunner Dylan Prouty gets his hand on second base ahead of the tag attempt by Vermillion's Willis Robertson during their American Legion baseball matchup on Tuesday at Yankton's Riverside Field at Bob Tereshinski Stadium.

Vermillion first baseman Clayton Sorensen camps under a pop-up, catching it for an out during his team's American Legion baseball matchup against Yankton, Tuesday at Yankton's Riverside Field at Bob Tereshinski Stadium.

Vermillion keeps rolling along in Legion play this summer as they notched two more wins on the season against Alexandria and Yankton this past week. Great pitching, timely hitting and good defense seem to be key to the Post 1 success over the last few weeks.

Another complete game shutout for Jake Jensen and hot hitting from Jack Kratz proved to be too much on Wednesday, July 7th at Prentis Park as Post 1 rolled to their tenth win in a row 6-0 over Alexandria.

Jensen allowed only three Alexandria hits over the seven inning game and was in command all night. No walks helped keep the Alex batters on the bench, along with ten strikeouts. Sixteen first pitch strikes helped keep the opposition off balance and behind in the count early. And if that was not enough, he only faced 22 total batters, one more than the minimum for a seven inning game.

“Jake Jensen was special for us. He was in total control the whole game,” said Coach Tom Heisinger after the game. “He does such a good job with his command with both his fastball and curveball. It was a great performance.”

The game started slowly with no runs for either team through the first two innings, but that would change in the bottom half of the third when Jack Kratz belted a three run home run to right-center field. The blast was Kratz’s second home run of the Legion season. He finished the game three for four with the home run, a double and a single along with five RBI.

Coach Heisinger had praise for Kratz and others after the game. “Jack Kratz carried us at the plate. He did a great job of staying disciplined and swinging at strikes and attacking the baseball.”

“Our bottom of the order guys did a great job of putting the ball in play and having tough at bats. Ben Burbach, Clayton Sorensen, and Reece Proefrock did a good job for us there,” said Coach Heisinger.”

Base running helped a bit too, getting guys in scoring position. Vermillion swiped five bags during the contest.

In a battle just down Highway 50 on Tuesday, July 13, the Vermillion Post 1 team defeated Yankton Post 12 by a final score of 4-0. Post 1 used two pitchers to shut out the home team and held their bats mostly silent all evening.

Drew Thelen was called on to start and he delievered by throwing six and two thirds innings of great baseball. Thelen gave up only two Yankton hits and struck out seven. Vermillion then went to closer Willis Roberston to get the final out of the seventh, only facing one batter while thowing four pitches. Roberston retired that final batter with a fly ball to shortstop to seal the victory.

Post 1 banged out eight hits against a good Yankton squad led by Drew Thelen who helped himself with two doubles and Connor Saunders who contributed two singles for the Vermillion offense. Reece Proefrock, Ben Burbach, Dylan Thelen, and Jack Kratz all had hits on the evening. Burbach added two RBI and Kratz’s lone hit was a double.

Vermillion Post 1 is nearing the end of a long summer season as their Region Tournament is just around the corner. As of print time Wednesday, July 14, Vermillion boasts a record of 16-4. Rounding out the regular season for Vermillion Post 1, the boys of summer will travel to Sioux Falls on Wednesday July 14, as they visit the Sioux Falls Black squad that is new to SD Legion Baseball this summer. Saturday, July 17 is a quick trip down to Elk Point as they visit EPJ at Todd Larsen Field at 2:00pm.

The last home game for Post 1 will be Thursday, July 15th as they take on Tabor which should be a good rematch from earlier this month.

Postseason play is scheduled to start on July 21 in Lennox. Post 1 already knows they will be playing at 2pm that day, against Elk-Point Jefferson. Winner of that game will play Tea that same day at 7pm.

District Tournament Games – all games in Lennox, all game times are Central.

Game 9 – If necessary – Same two teams from Game 8 again (if both teams have a loss after Game 8). Winner is Region Champion.