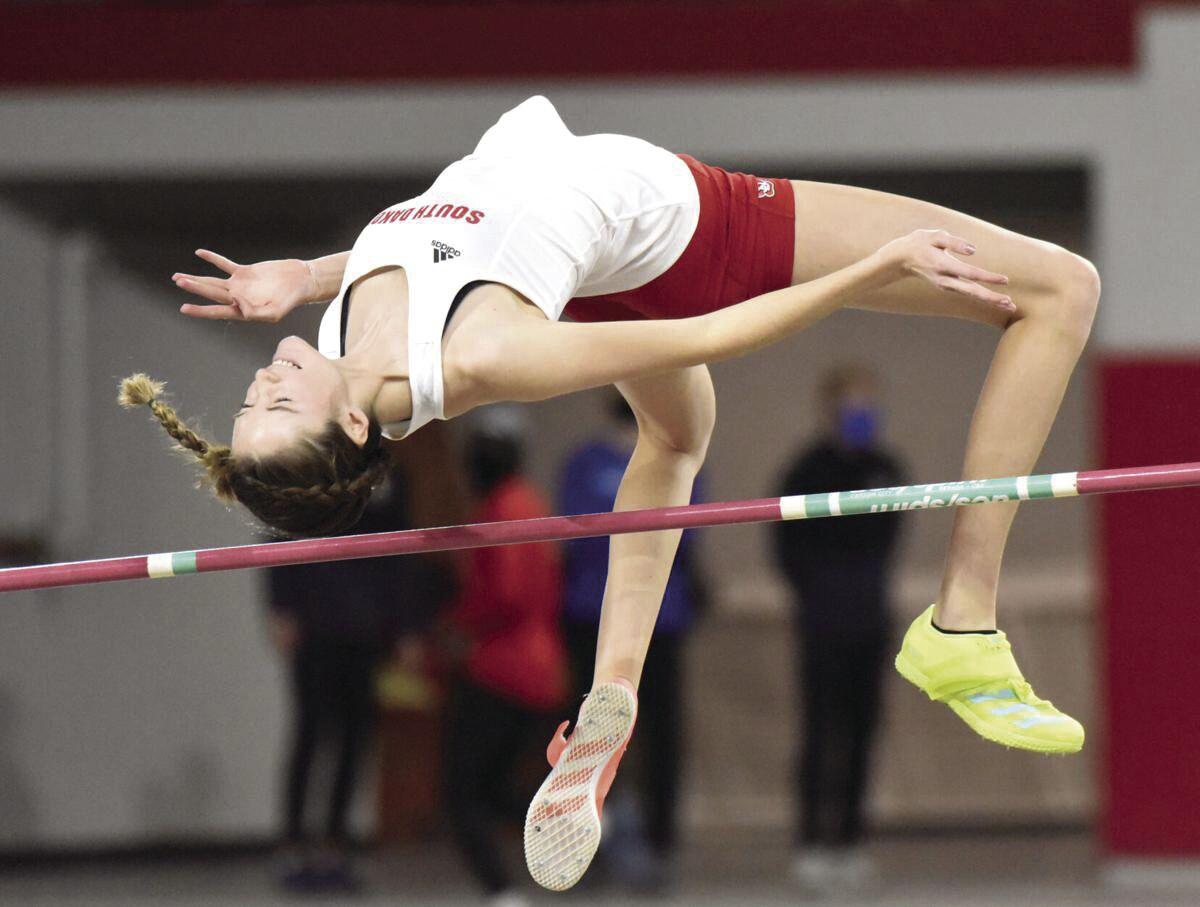 South Dakota’s Carly Haring, shown here during an indoor meet earlier in 2021, has developed into one of the top women’s high jumpers in the country. The Mitchell native has spent her college career working alongside the Coyote men’s highly-ranked high jump group. 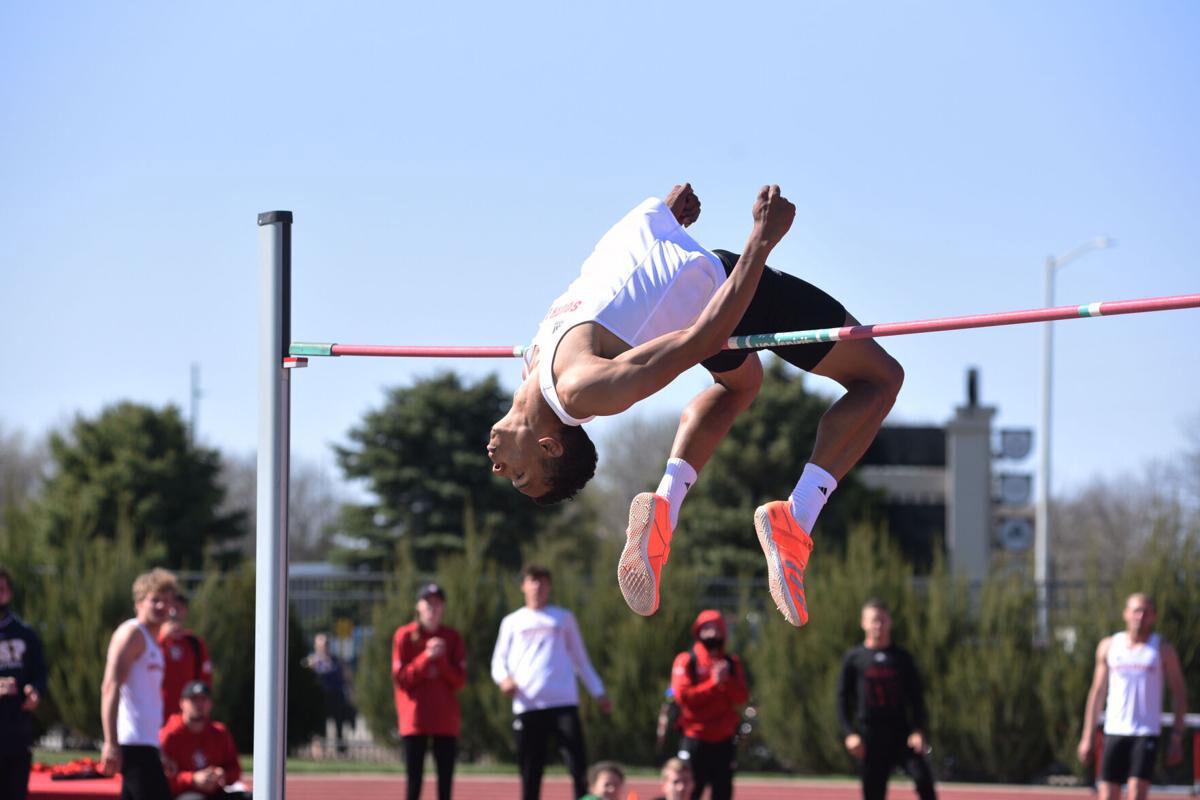 USD senior high jumper Zach Anderson attempts to clear the bar at the South Dakota Challenge in Vermillion. Anderson, a Parker native, ranks as one of the the top men's high jumpers in the nation, clearing 7-5 earlier this season.

South Dakota’s Carly Haring, shown here during an indoor meet earlier in 2021, has developed into one of the top women’s high jumpers in the country. The Mitchell native has spent her college career working alongside the Coyote men’s highly-ranked high jump group.

USD senior high jumper Zach Anderson attempts to clear the bar at the South Dakota Challenge in Vermillion. Anderson, a Parker native, ranks as one of the the top men's high jumpers in the nation, clearing 7-5 earlier this season.

VERMILLION — When Zach Anderson arrived at USD, he had the opportunity to watch Chris Nilsen and the pole vault squad work it’s way to the top team in the nation and Anderson set a new goal: Get the USD High Jump to No. 1 in the country.

“The pole vault squad was ranked number one, and he (Anderson) came to me and said ‘well how come our high jump squad isn’t that,’ and I said ‘well it’s hard, you gotta have a lot of things happen,’” USD Director of Track and Field Lucky Huber said. “He goes, ‘that’s what I want to have happen though….’ They’re all pretty much, South Dakota, Nebraska, one Kansas kid that just came in here and really worked hard and really support each other and a lot of that just goes to Zach’s attitude.”

Earlier this spring, Anderson cleared 7-5 to qualify for the Olympic Trials this summer in Eugene, Oregon. The high jump squad also ranked No. 1 in the nation following the meet. The high jump team will compete at the Summit League Outdoor Championships in Vermillion this week.

“It’s awesome, great group of guys who I’ve gotten close with over the years,” Anderson said. “Two years ago we ended up being number one in the nation. And then that just kind of created a standard for us to where we needed to be. People who come in here know that our high jump group will expect that and will expect you to work hard and and jump high and be part of that atmosphere that continues to do such.”

The atmosphere that Anderson has built has become more of a family than a team, despite the individuality of the sport. Anderson said growing up playing team sports in Parker, South Dakota lead him to want to create a team atmosphere as a high jump squad at USD.

Huber said for the high jump squad, it’s not about how one jumper can get higher, it’s how the whole team can clear the next bar.

“He was able just to create an atmosphere where it wasn’t one trying to beat another one, it’s how do all of us jump a little bit higher,” Huber said. “And when one of us jumps better than that helps the group ranking, and it just really kept building from there. They’re an amazing group of people. That group spends more time fishing than they do high jumping but they’re just great friends off the track too.”

One person Anderson and Huber have worked with is the lone women’s high jumper for USD, Carly Haring. Haring, a Mitchell native, came to USD and had Huber tell her she needed to start from the bottom in reworking her jump.

“One of my first practices here, he (Huber) told me to just run, and he watched me, and he told me that we are going to have to start from ground zero,” Haring said. “So, I had a lot of one on one training sessions just learning how to run.”

Once Haring learned the running form, she exploded from there. Haring ranks inside the Top 20 in the country in the women’s high jump, clearing 5-10 ¾ earlier this spring. For Haring, the rest of the high jump team is a group of older brothers.

“All of the high jump boys have been huge role models,” Haring said. “I feel like I have a family of five big brothers here. They’re always supporting me cheering for me. I tell them when I’m nervous and they hype me up. They’re all just great, great people and fun to jump with and learn from.”

Thursday and Friday’s competition includes the heptathlon and Decathlon events. Thursday will also have the men’s and women’s javelin and hammer throws. The 10,000-meter run caps the day.