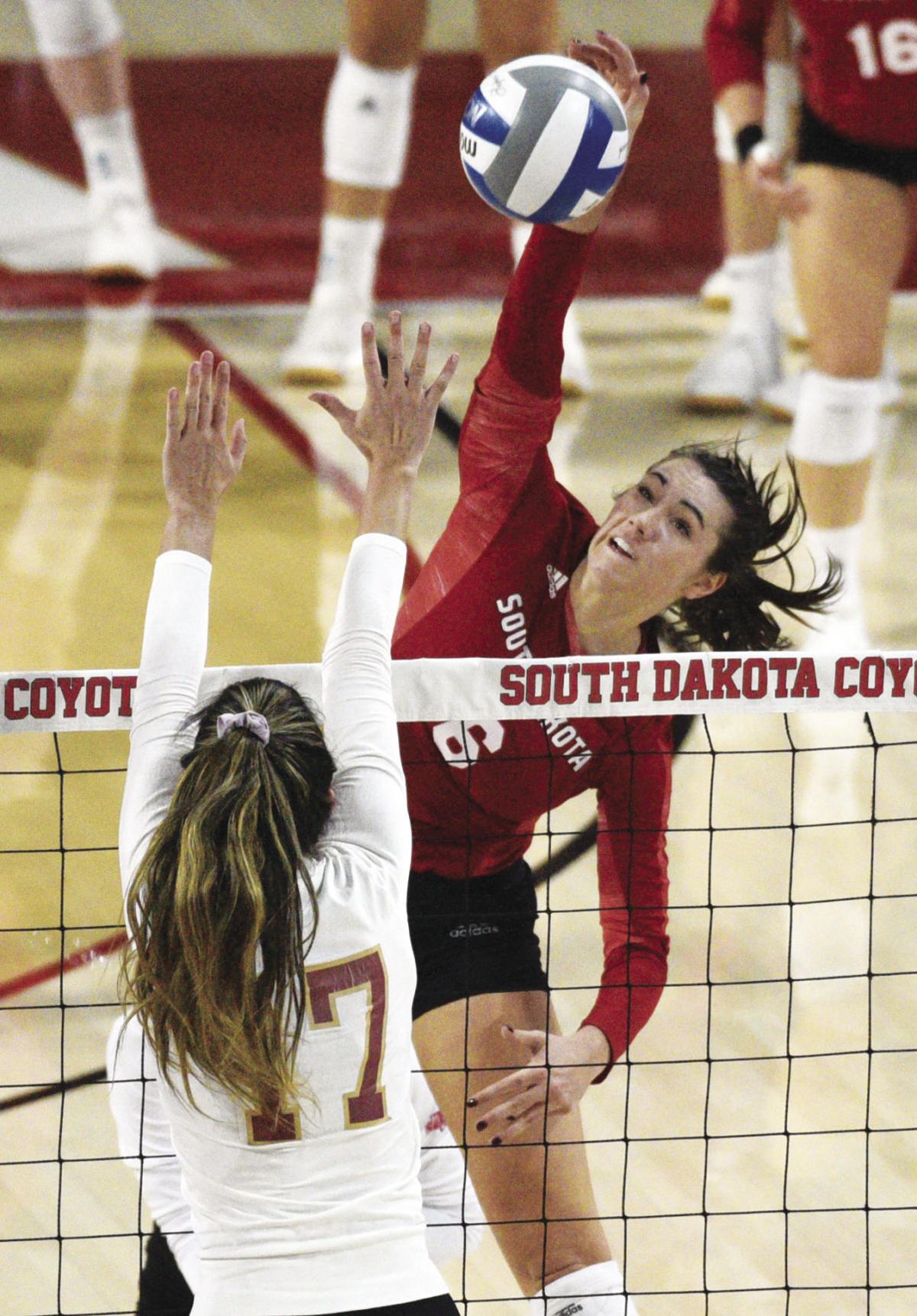 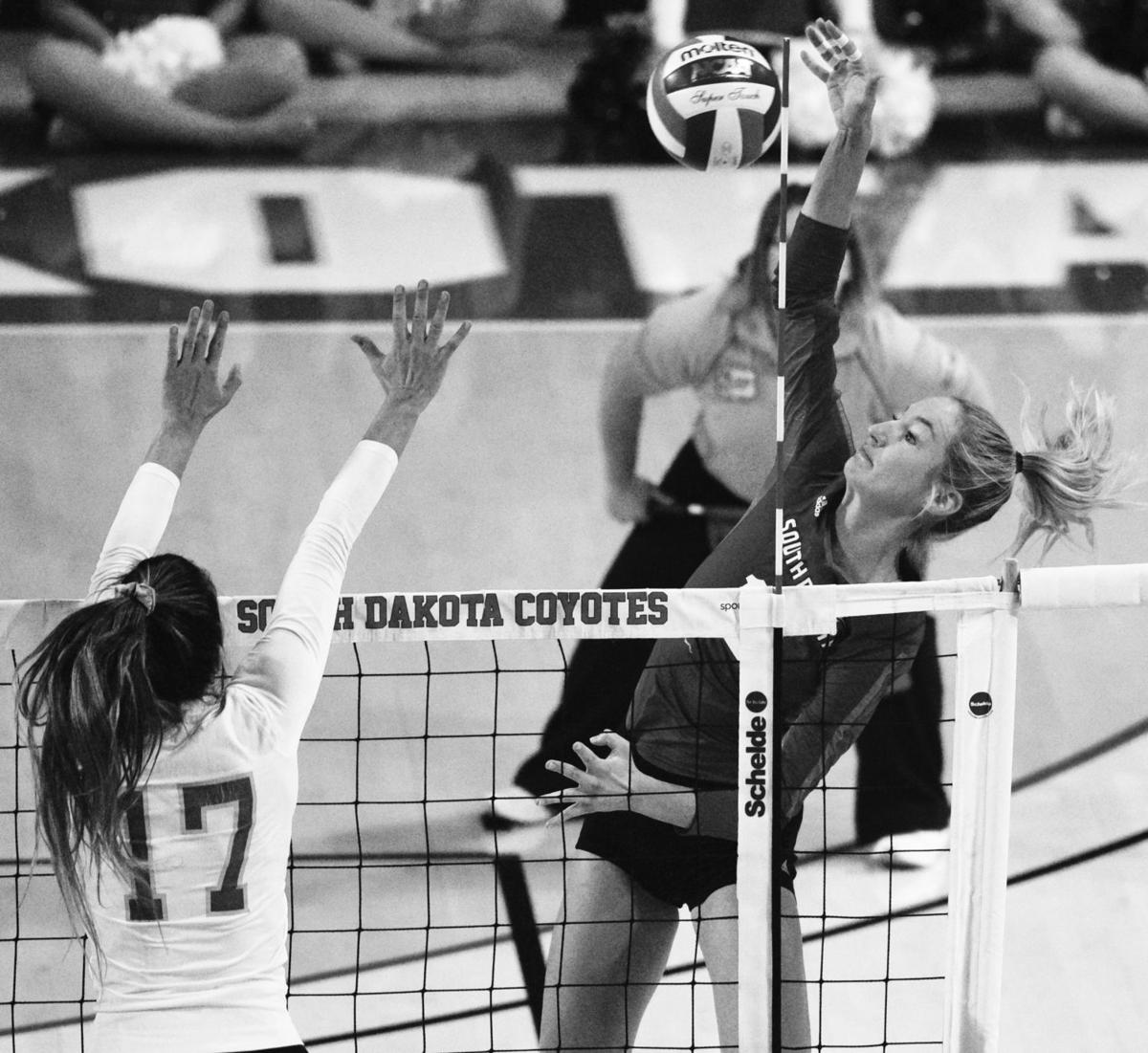 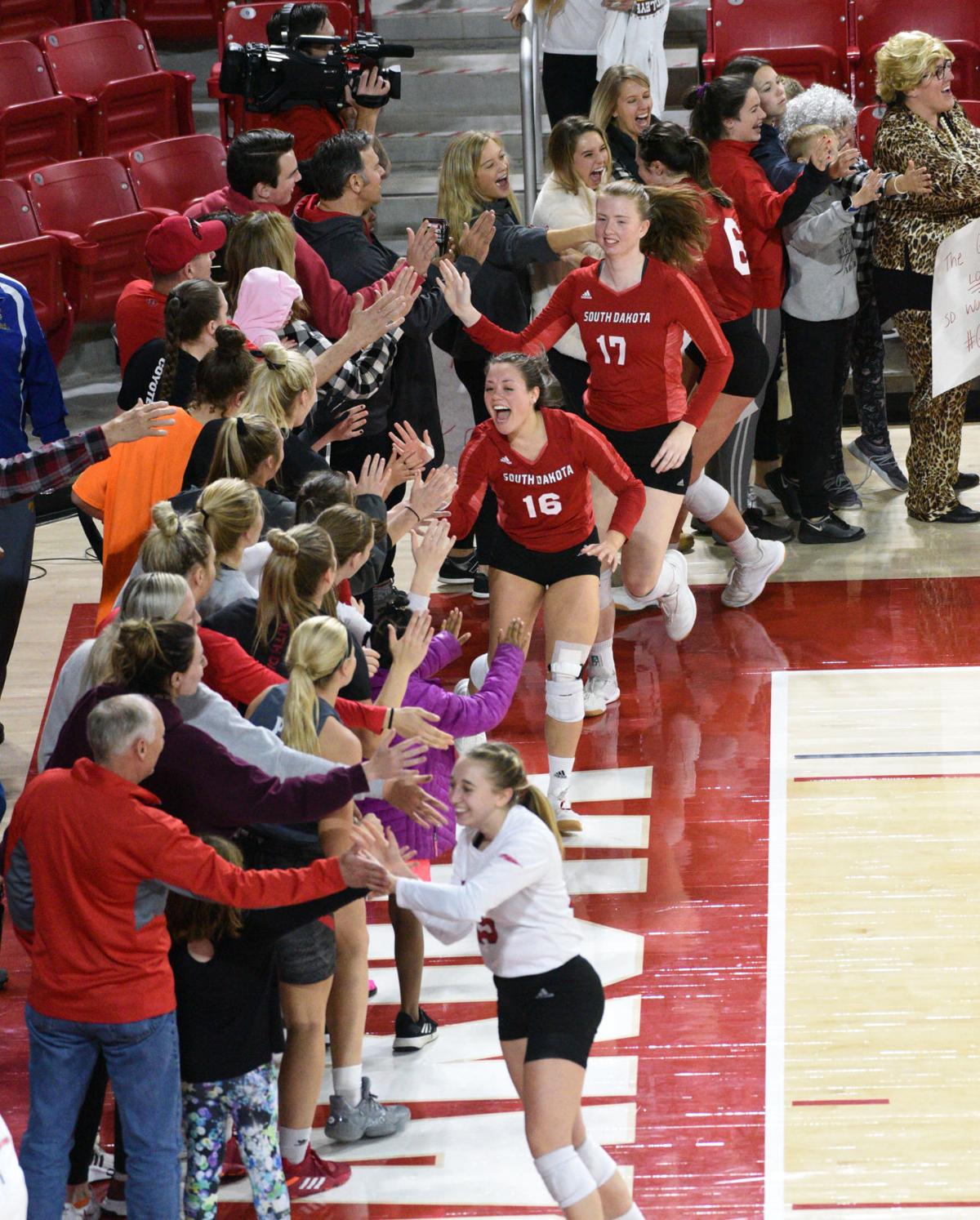 South Dakota players are congratulated by fans as they leave the court after a 3-1 victory over Denver in Summit League volleyball action on Sunday at the Sanford Coyote Sports Center. 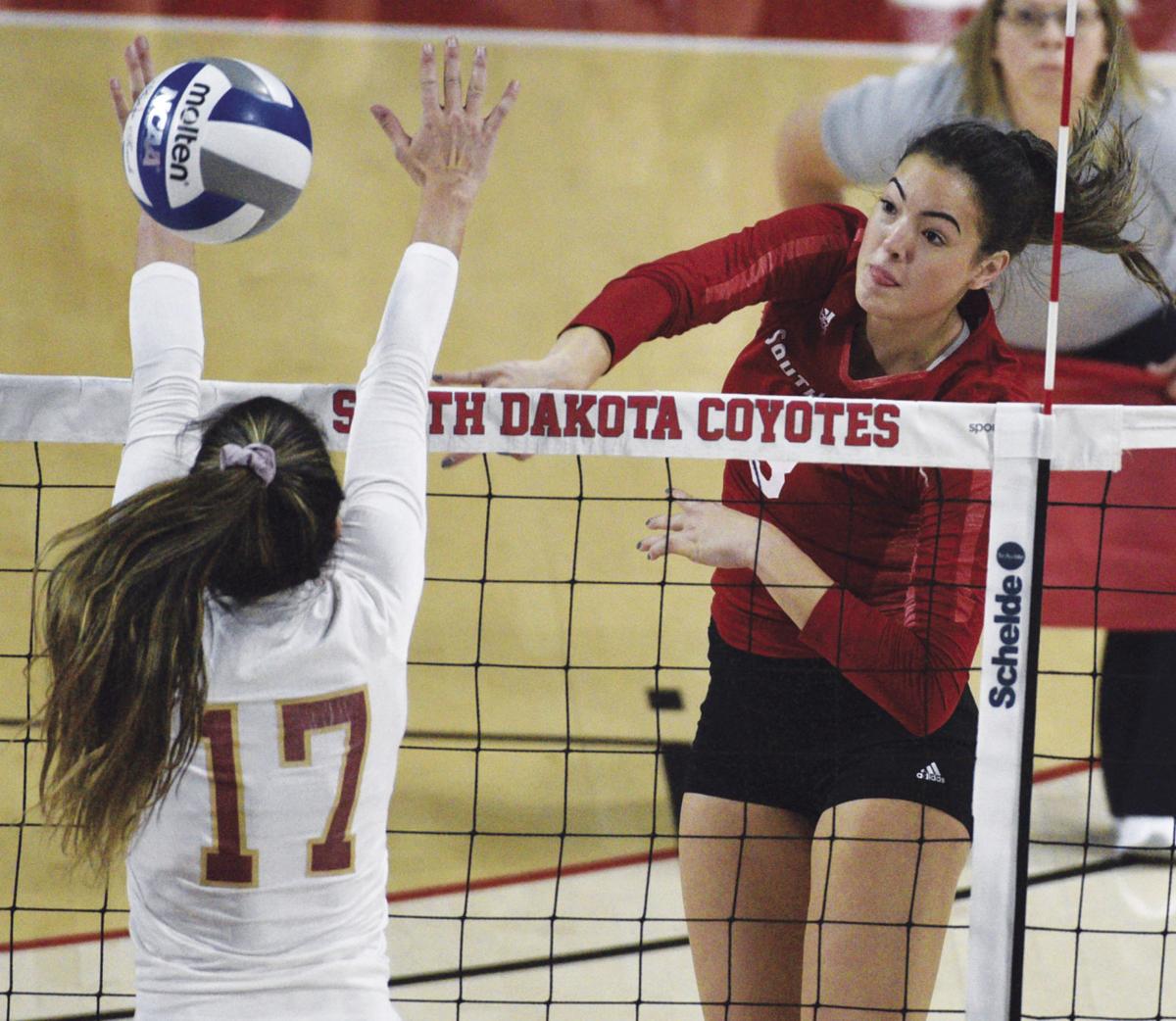 South Dakota's Sami Slaughter attacks the ball against the block attempt of Denver's Katie Mahoney during their Summit League volleyball match on Sunday at the Sanford Coyote Sports Center.

South Dakota players are congratulated by fans as they leave the court after a 3-1 victory over Denver in Summit League volleyball action on Sunday at the Sanford Coyote Sports Center.

South Dakota's Sami Slaughter attacks the ball against the block attempt of Denver's Katie Mahoney during their Summit League volleyball match on Sunday at the Sanford Coyote Sports Center.

VERMILLION — Since July, the Coyotes have been preparing for the big matches and the big moments.

And it all came together on Sunday afternoon, as the Coyotes connected on big swings and had strong defensively play in their 21-25, 30-28, 25-15, 25-16 win against the Denver Pioneers at the Samford Coyotes Sports Center.

Oh yeah, not to mention it was their 20th match win in a row.

The Coyotes, coming off of a huge Summit League win against Omaha on Friday night, knew they would be facing a tough opponent in Denver, as the Pioneers have won the regular season championship in the Summit for the past five years, and trailed the Coyotes by just two wins in the conference standings.

The Pioneers started off the match with excellent play, but Denver couldn’t shake South Dakota, as the Coyotes trailed by just two points late in the set at 21-19. Denver would ultimately win the first set behind excellent hitting from multiple Pioneers, putting away the set with a kill by Andrea Eddy.

And even though losing the first set was not ideal, South Dakota knew that they hadn’t played their best volleyball.

“It’s always nervous not winning that first set, but we knew that we didn’t play Coyote volleyball, so we knew that these next sets we could play,” Junior Outside Hitter Sami Slaughter said.

The Coyotes brought energy into the second set, battling with the Pioneers to a 22-21 score in the second set, before Denver was able to get to match point. The Coyotes, however, stayed resilient, preventing Denver from winning the set on four different match points, and before ultimately winning the set 30-28 on a block by Madison Jurgens and Maddie Wiedenfeld behind a roaring fan base at SCSC.

“Denver and us are obviously both two really good teams and we knew that we needed to be patient until we hit our stride. We had a little bit of that back against the wall situation. We were close to going down 2-0 there, but we made a couple nice plays,” Coyote Head Coach Leanne Williamson said. “You felt our energy rise. You felt the energy rise in the SCSC rise and I think that is what we really needed.”

The Coyotes had struggled on the defensive end up until the third set, as Denver was able to hit over .350% up to that point. However, after the huge second set win, the defense was able to lock down and make plays, holding the Pioneers to a .059% hitting percentage while cruising to a dominate 25-15 victory in the third set.

“I think once we got that second set and were able to pull that one out, I felt like our team just felt relaxed a little bit. They sat back, and they played a lot more within their zone,” Williamson said. “We got into a rhyme, defensively we started to make some plays, and blocking-wise we started to make some plays. We made them have to think a little bit more and that’s when we got into a really good rhythm as a team.”

The Coyotes would then finish the match on a tear behind the thunderous home crowd, winning the final set dominantly with a 25-16 victory, and adding one more win to their now incredible 20 match win streak.

“Our crowd was incredible tonight...They were loud, they were engaged and they made this place really tough to play in, and I think that propelled us through the third and fourth set,” Senior Defensive Specialist Anne Rasmussen said.

And it wasn’t without an excellent defense from the Coyotes, as Rasmussen and company dominated the defensive end in the last two sets, holding the Pioneers to just a .147% hitting percentage in those final sets.

“We knew it was going to be a very offensive game, they ‘re a very good offensive team, we’re a good offense team so I think that going into the last two sets we had that mentality of one point at a time, and trying to make one big play and slowly grinded it out,” Rasmussen said.

The Coyotes offense was also not without its’ heroics in their historic victory, as Freshman Outside Hitter Elizabeth Juhnke finished the match with 19 kills, while Slaughter added 16 kills.

“I think we had great intensity, we went out flying around and having fun. I thought our team, we really stuck together. We hit well, we passed well, we served well,” Juhnke said. “I think in the first set, what we struggled with was our serving and we came back, and we just came out and had some fun.”

Jurgens was also excellent on the night, handing out 53 assists, while Rasmussen end with 14 digs, and teammate Lolo Weideman added 15 digs.

And while there were many excellent individual efforts in the match, Coach Williamson believes that everyone stepped up as a team to give them the victory, and that is what helped propel them to their 20 match win streak.

Now, as the win streak continues to climb, the Coyotes can’t help but look back on all the hard work that has brought them to where they are today.

“It’s huge, I think this season we knew that it could be really good, it could be special, I think that if you asked me back in August if we had one loss right now, I don’t know if I would have thought that was the case,” Williamson said. “I think it just goes to show how disciplined this team is in terms of getting better every day. They knew and continue to know that there are things they need to get better at.”

Now the Coyotes will enjoy the huge win over Denver before getting ready to face rival South Dakota State on Tuesday at the SCSC.

“I think it’s just fun that we get to play them (South Dakota St.) on our home court, we are going to go out, work to get better, work to play as a team and just have a lot of fun,” Juhnke said.

“It’s a big rivalry match for us, I think they always play their best volleyball against us just because we do have that rivalry,” Rasmussen said. “So I think for us, it’s just staying clean, playing our style of volleyball and doing what works for us.”

If the Coyotes win on Tuesday, they clinch a share of the Summit League regular season championship for the first time since 2016. The match time is set for 7:00 p.m.