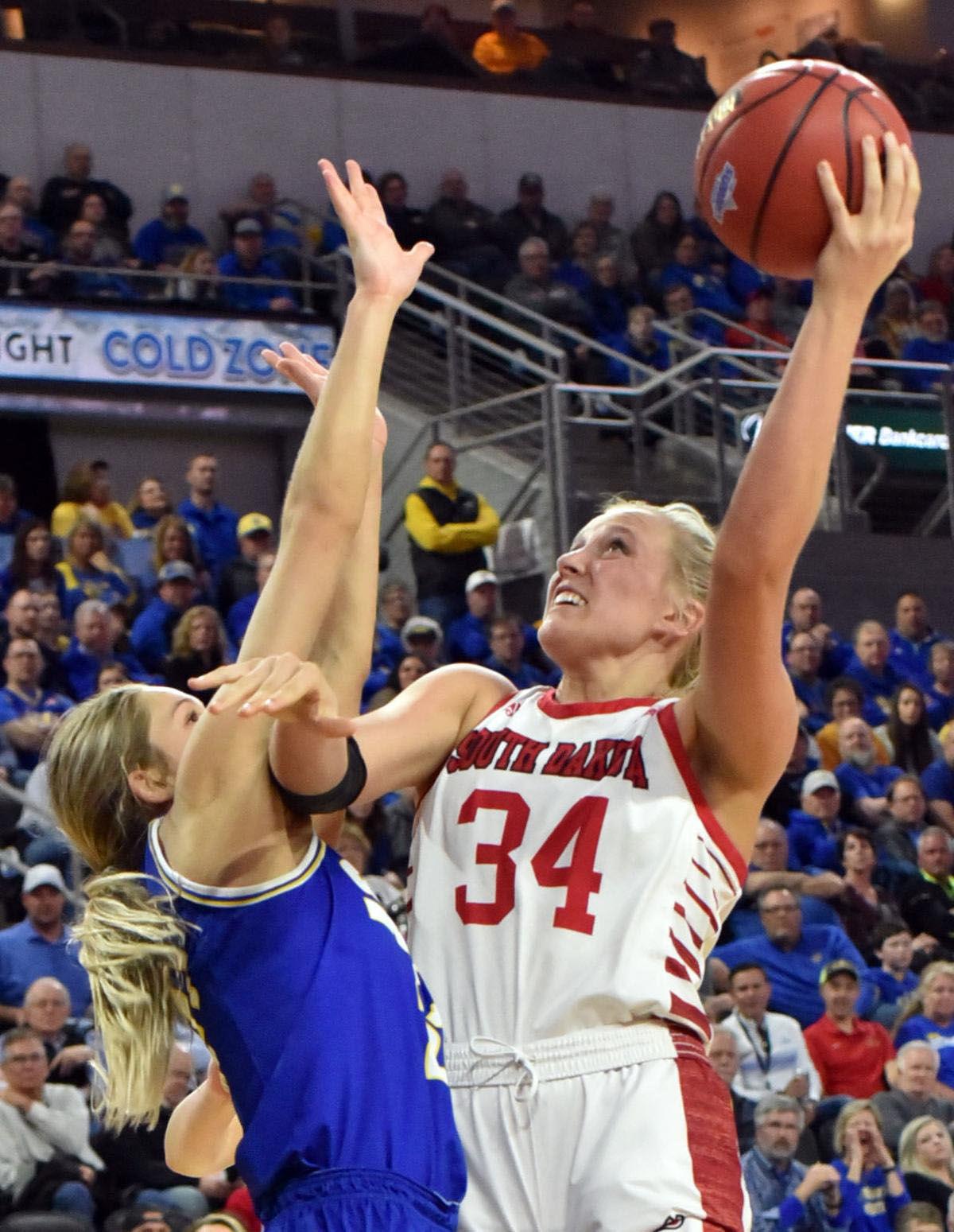 South Dakota's Hannah Sjerven goes up for a shot in the lane against a South Dakota State defender during the Summit League Women's Basketball Tournament championship game on Tuesday at the Premier Center in Sioux Falls. 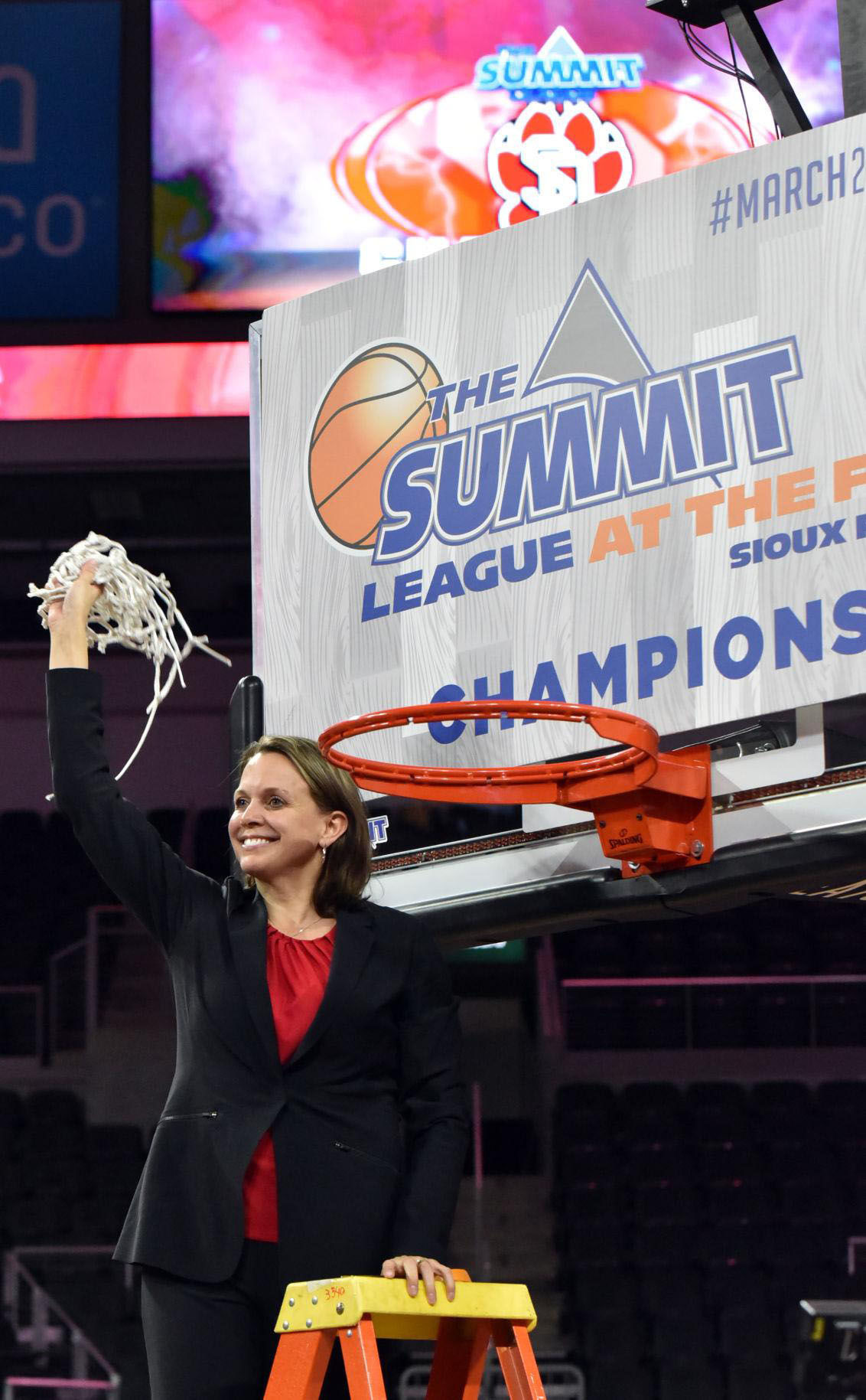 South Dakota head coach Dawn Plitzuweit holds up the net after the Coyotes won the championship game of the Summit League Women's Basketball Tournament on Tuesday at the Premier Center in Sioux Falls.

South Dakota's Hannah Sjerven goes up for a shot in the lane against a South Dakota State defender during the Summit League Women's Basketball Tournament championship game on Tuesday at the Premier Center in Sioux Falls.

South Dakota head coach Dawn Plitzuweit holds up the net after the Coyotes won the championship game of the Summit League Women's Basketball Tournament on Tuesday at the Premier Center in Sioux Falls.

SIOUX FALLS — As chants of ‘red state’ echoed throughout the Premier Center, the trophy was about to be handed to a new champion.

The University of South Dakota.

After five losses to their rivals in the Summit League championship game, the Coyotes were able to thrust the monkey off their back by beating South Dakota State.

The 63-58 victory in Tuesday afternoon’s final in Sioux Falls was USD’s first conference tournament championship since 2014 — and first for the four seniors.

“Winning this tournament, none of us have ever done it,” senior Ciara Duffy said.

“So to be able to win our way into the NCAA Tournament and do it in a rivalry game was definitely really special.”

Especially considering USD’s 0-5 record against the Jackrabbits in that setting.

Ultimately, though the Coyotes (30-2) wanted to head into the ‘big dance’ by virtue of a victory — they received an at-large invitation a year ago after losing in the finals.

“Being able to do this on our own terms and win this game and get to the NCAA Tournament; to put that in our hands feels very good,” junior Chloe Lamb said.

Particularly for those seniors.

They have twice won the Summit League regular season crown (both times with an undefeated run), reached the tournament all four years and had twice played in the title game.

“They’ve worked so hard to get to this point and have this opportunity, and today capitalized on it.”

It was far from without stress, though.

The Coyotes overcame a rough shooting start (they also shot 34 percent for the game) and were never able to gain much separation from the Jackrabbits.

South Dakota led for most of the fourth quarter, but perhaps the most crucial basket came on a scoop layup by senior Madison McKeever with 1:46 remaining — that gave USD a 59-33 lead.

South Dakota State missed a layup with 21 seconds left that could have brought the Jacks within 60-57, but USD senior Taylor Frederick then made a free throw.

It wasn’t pretty, but the Coyotes got the job done.

“We found a way down the stretch, and ultimately that’s the most important thing,” Plitzuweit said.

It also helped that USD didn’t panic in those moments where things weren’t crisp and sharp, according to McKeever.

“For us in the back of our head, we knew all the time we spent in the gym and working all preseason,” she said.

“I had faith in my team the whole way that we were going to come out with this win.”

“My team does a really good job of holding me accountable,” she said.

According to Sjerven, she was pulled aside at halftime by Lamb who said, ‘It’s time to toughen up.’

“And she was right,” Sjerven said. “That’s what worked for me.”

Lamb and McKeever both finished with 11 points for the Coyotes, while Duffy and junior Monica Arens both scored 10 points.

“We wanted to win that, just like every other team. But I’m proud of our group; we played togehther and amazing.”

It’s the Coyotes, though, who will await the NCAA Tournament selection show next Monday.