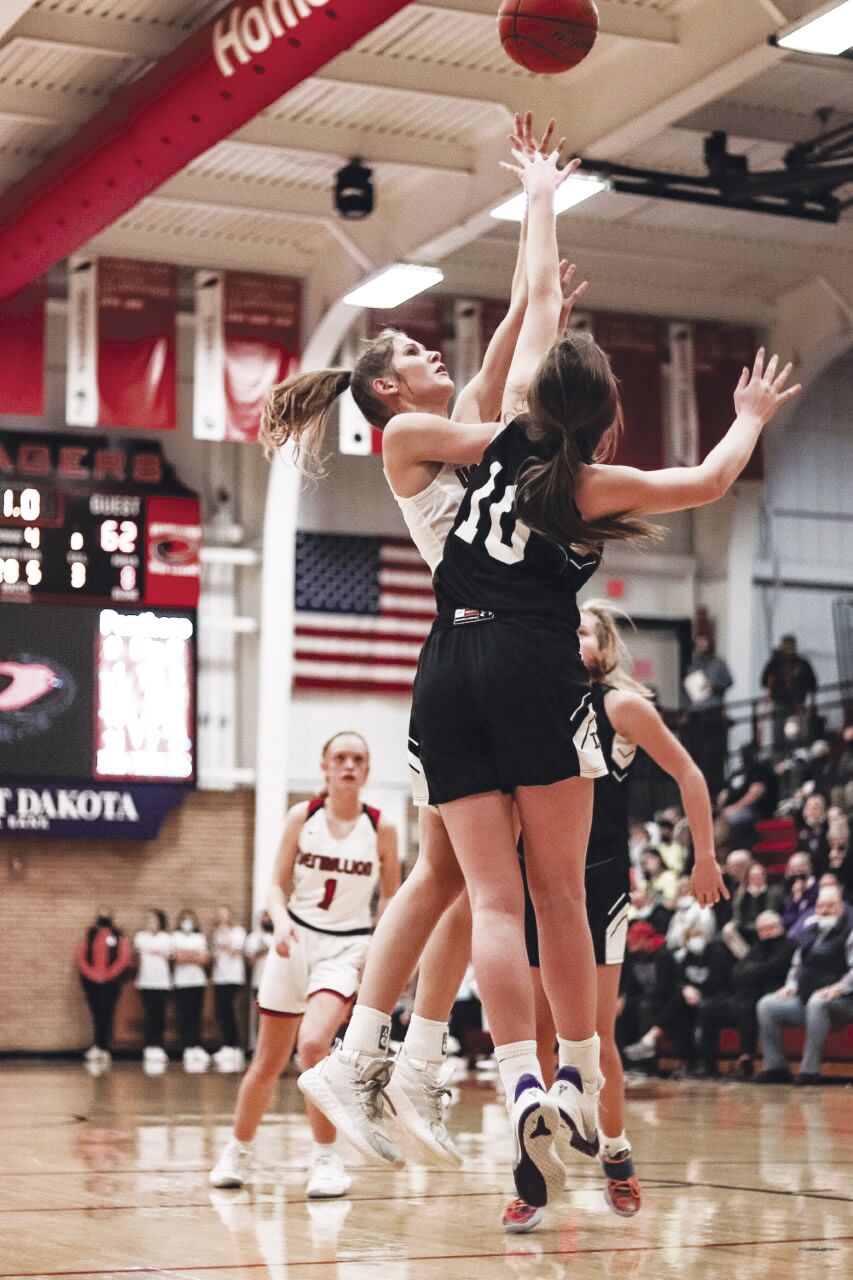 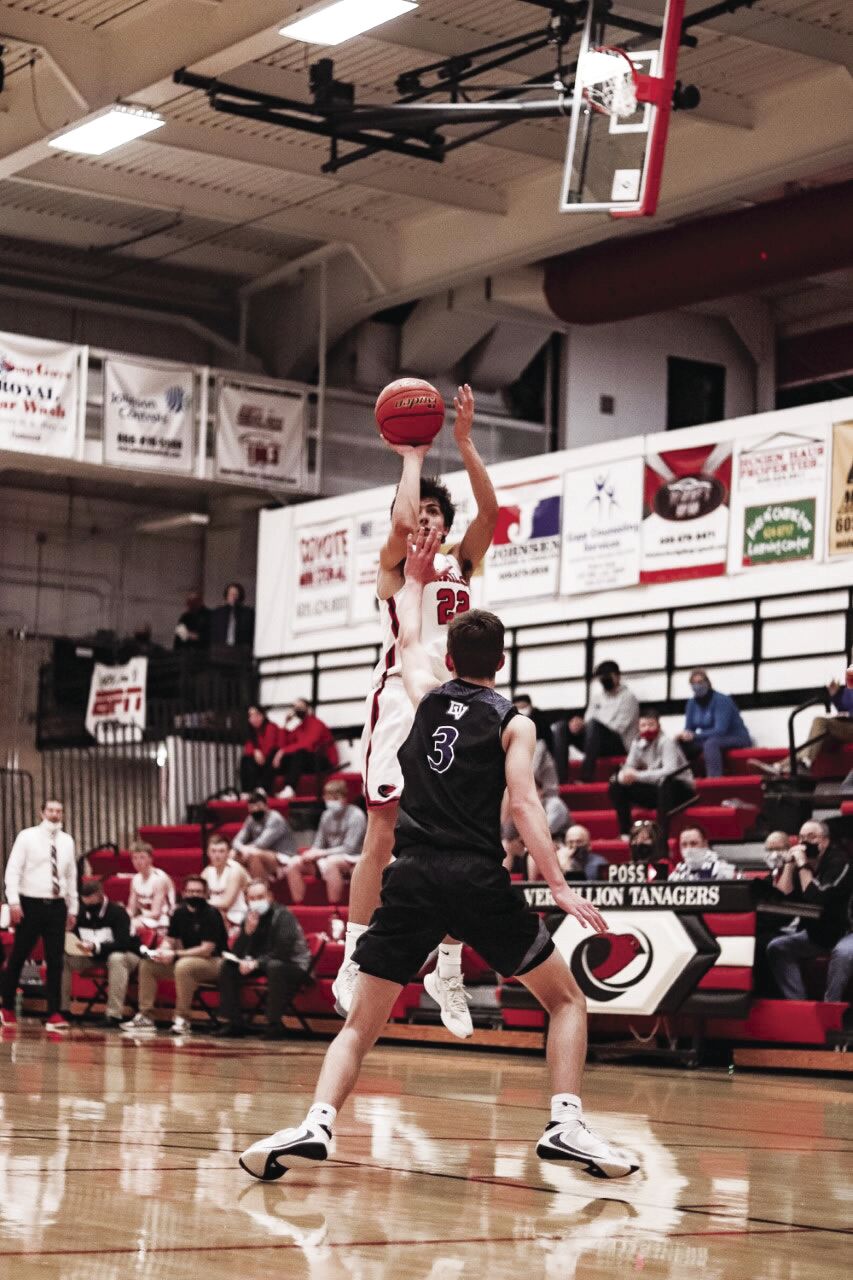 Senior Jakob Dobney shoots the 3 in Vermillion’s 79-68 win over Dakota Valley last Tuesday at home. The Tanager boys are 14-0 on the season.

Senior Jakob Dobney shoots the 3 in Vermillion’s 79-68 win over Dakota Valley last Tuesday at home. The Tanager boys are 14-0 on the season.

The Tanagers hosted the Dakota Valley Panthers last Tuesday for a doubleheader. The Vermillion girls lost 52-62. The boys, No. 1 in the state, defeated the No. 3 Panthers 79-68.

The girls’ varsity game was close through the final quarter with seven lead changes in the game. The Tanagers were down two, 12-14, at the end of the first quarter.

Dakota Valley built their lead in the second. Vermillion was down 24-32 at the half.

In the third, the Tanagers outscored the Panthers by three and were down 46-51. The competition maintained momentum in the third, handing Vermillion the 52-62 loss.

“Our DV game was another close loss,” said Vermillion girls head coach Jon Brooks. “We have played well against the top teams in the state but just haven't found a way to win one yet.”

“DV has a really good team and is very physical inside,” said coach Brooks. “We gave up too many offensive rebounds, so that will be a big focus moving forward. We are gaining a lot of good experience playing in these games, which will hopefully prove to be beneficial when regions come around.”

Senior Lexi Plitzuweit tallied a double-double with 18 points and 12 rebounds. She had three assists and two steals as well. Plitzuweit averages 16.3 points per game and 9.1 rebounds per game.

Eighth-grader Kasey Hanson had 17 points, five rebounds, two blocks, one assist and one steal for the Tanagers.

The boys’ varsity game was a matchup between two of the top teams in Class A.

"Our guys hung in there and stayed the course,” said Vermillion boys head coach Jay Drake. “Dakota Valley is a high scoring team and has lots of offensive firepower and can go on big runs.”

The Panthers were off to a fast start, gaining a 10-point lead in the first quarter. The Tanagers narrowed the deficit to four, down 14-18, going into the second.

Vermillion outscored Dakota Valley by 12 in the second quarter and held the competition to scoring eight points. The Tanagers were ahead 34-26 at the half.

The difference remained eight through the third quarter. Vermillion led 55-47 going into the final quarter.

In the fourth, the Tanagers gained a 17-point lead. Vermillion finished with the 79-68 win to remain the top team in the state and undefeated at 14-0.

“We got down early but were able to withstand their initial push, and we cut it to four points by the end of the first quarter and grabbed the lead early in the second quarter,” said coach Drake.

“Which we were able to build upon throughout the rest of the game, and we did a nice job of finishing the game out."

"The win puts us in a position to possibly win the Dak 12 Conference outright if we can win our remaining two conference games versus Madison and Canton,” said coach Drake. “It also allows us to still be in the picture of possibly being the 1-seed in Region 4A. We still have lots of work to do ahead of us to accomplish those things, but it at least keeps us in a position to possibly do it."

"We have to continue to get better as a basketball team over the remainder of the regular season, and we want to be playing our best basketball come postseason time," said coach Drake.

The Vermillion boys play at home Monday against Canton at 8 p.m. The girls finished their regular season Thursday and will begin region play Tuesday at the higher seed.

Updated brackets for the girls can be found online at sdhsaa.com/Athletics/Girls-Sports/Basketball/Brackets-A.