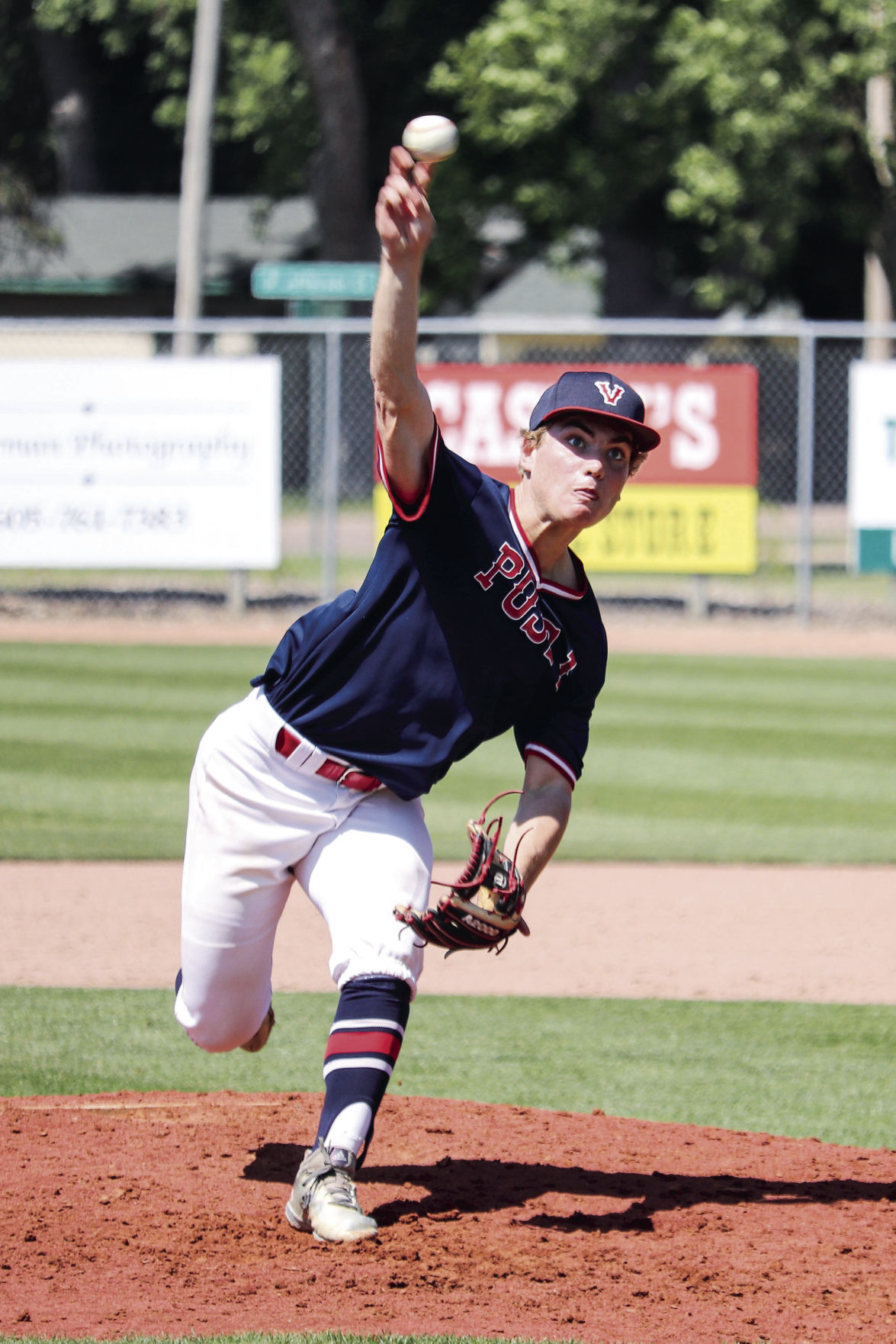 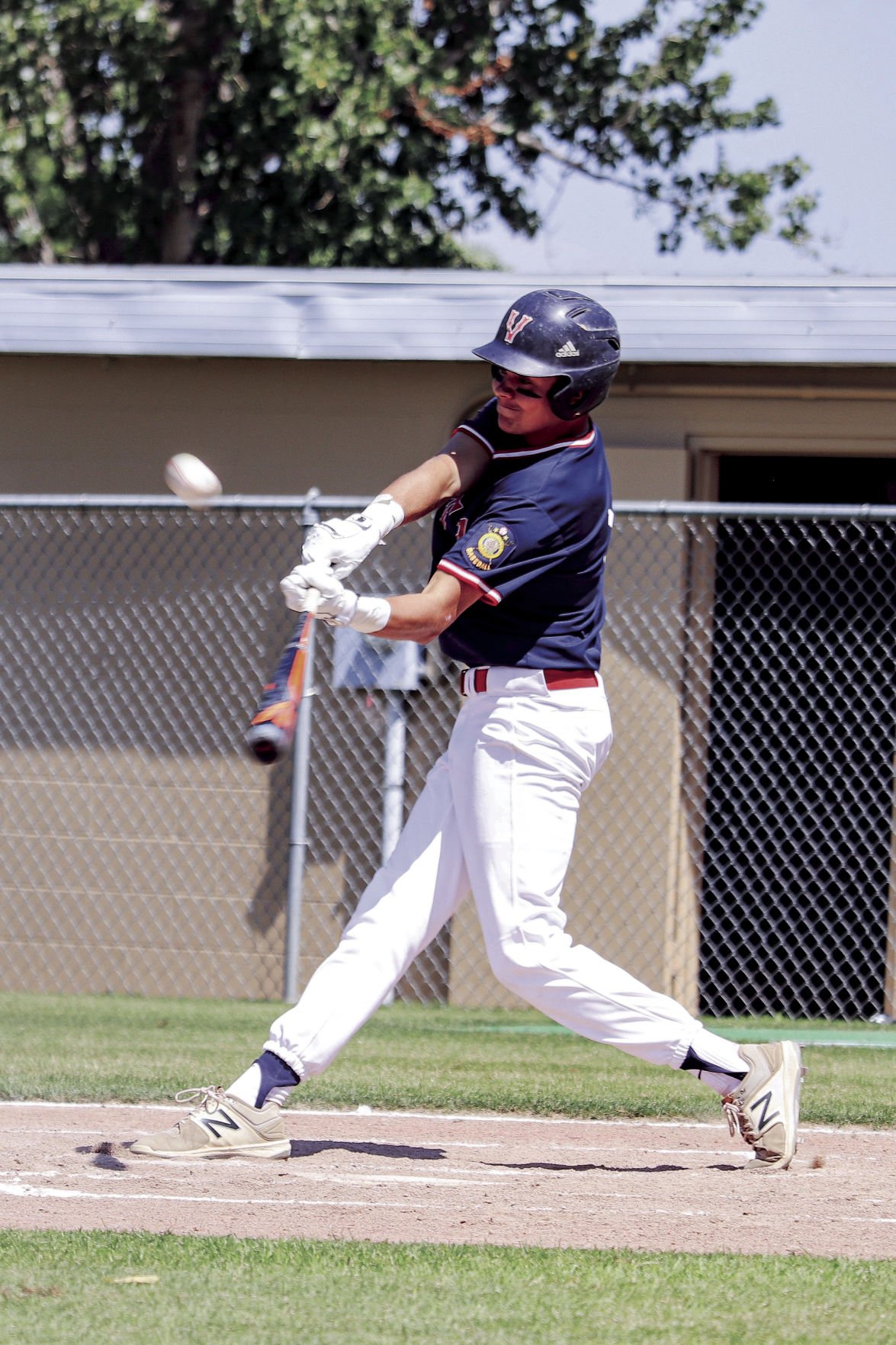 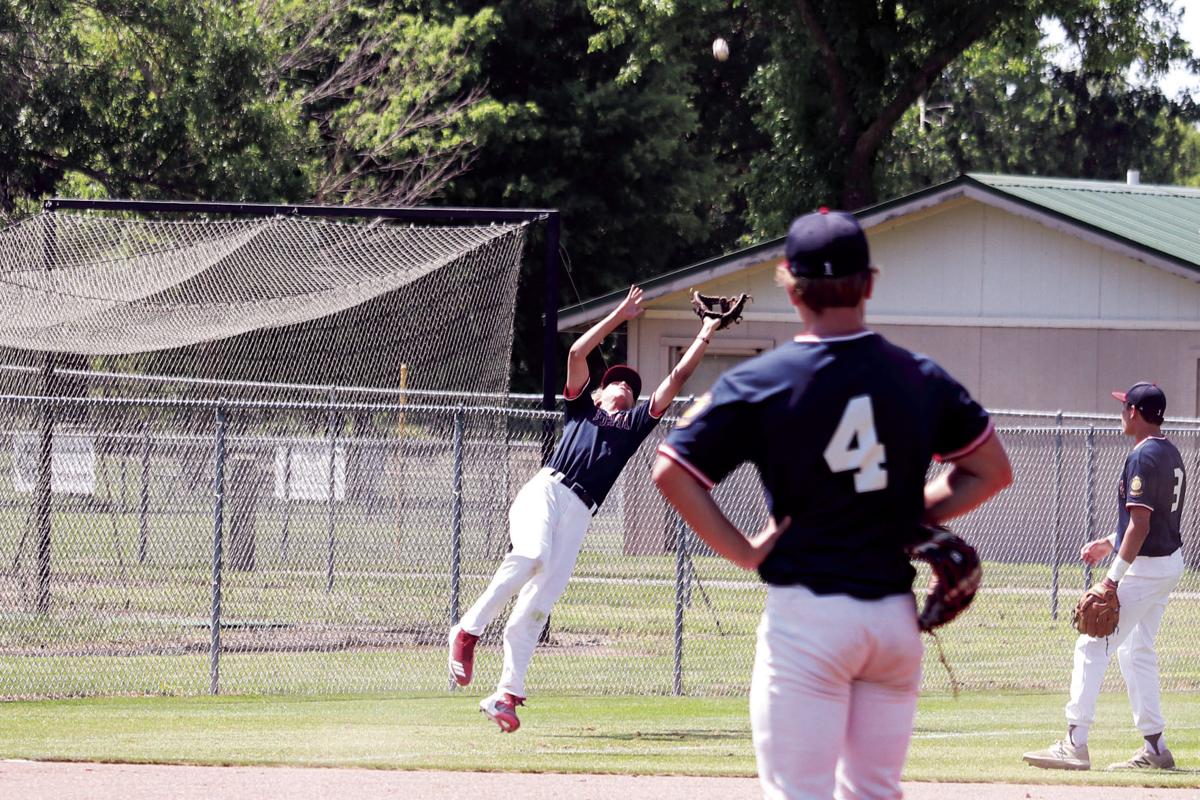 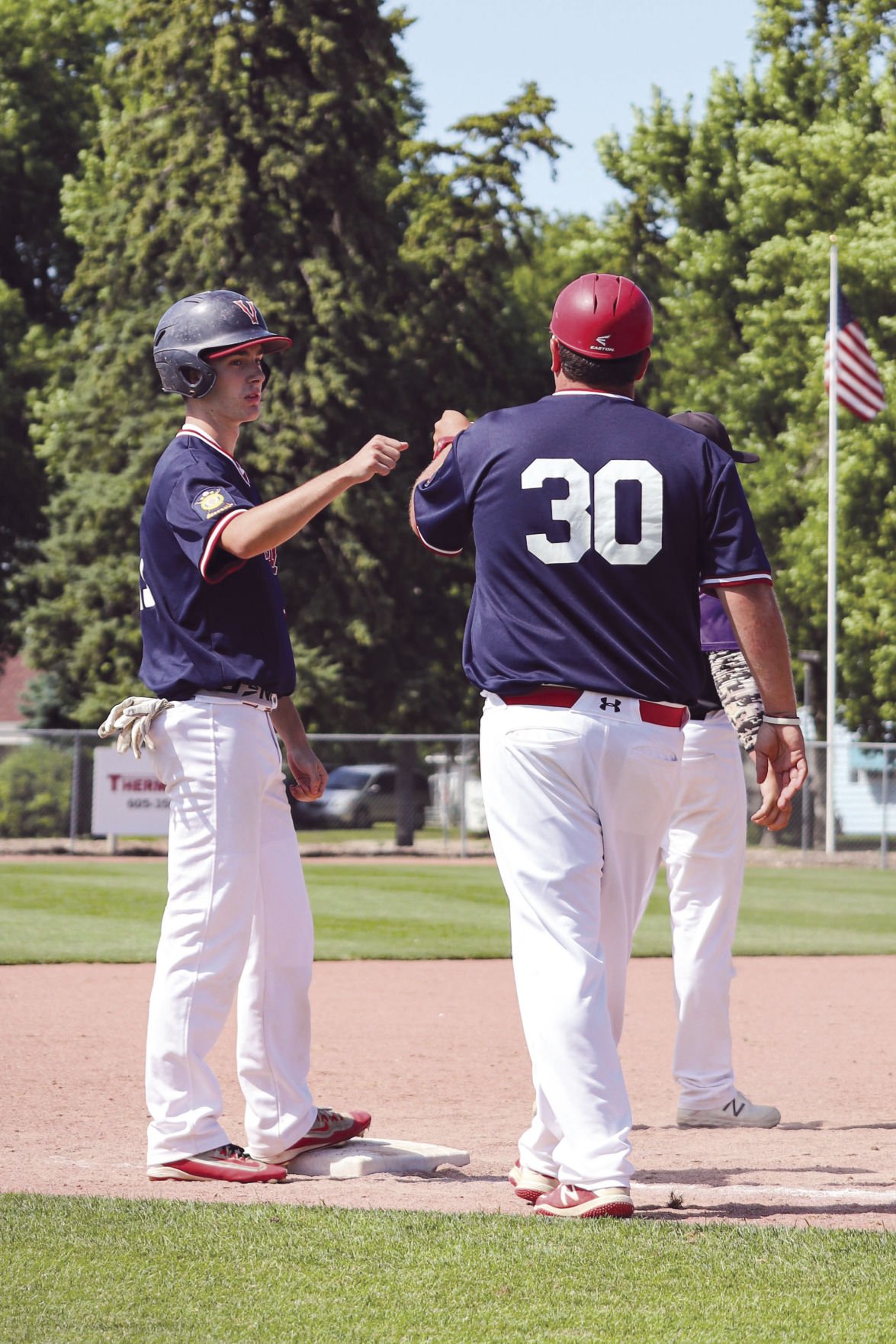 Sam Ward fist bumps coach Tom Heisinger after hitting a triple and starting the rally for Post 1 against Beresford in the first region tournament game.

Sam Ward fist bumps coach Tom Heisinger after hitting a triple and starting the rally for Post 1 against Beresford in the first region tournament game.

The Vermillion Post 1 baseball team competed at the Region 3B Tournament last week in Elk Point. Vermillion won their first game before losing the next two in the double-elimination tournament.

“I just love being around those guys,” said head coach Tom Heisinger about what he enjoys most about the season. “They are great kids and have done everything we have asked of them.”

Post 1 played Beresford in their first game last Wednesday afternoon. Vermillion made a rally to win 7-4.

Beresford took a 4-run lead after two innings, scoring one in the first and three in the second. The score remained 0-4 until the fifth inning when Vermillion began their rally.

Post 1 scored two in the fifth inning to be down 2-4. They carried the momentum into the sixth while holding Beresford to four.

Vermillion scored five runs in the sixth inning and held off Beresford in the top of the seventh to win 7-4.

Post 1 had 10 hits and two errors in the game. Beresford had four hits and no errors.

From the mound, Dylan Thelen pitched 4.2 innings and recorded six strikeouts. Chaussee finished the game and had three strikeouts.

“We just found a way to make it happen,” said coach Heisinger. “Our kids never quit. It was great to see the drive and competitiveness to find a way to win that game.”

The opponents started with the lead after scoring one run in the first inning and three more in the second.

Post 1 scored their first two runs in the fourth inning, minimizing the deficit 2-4. Vermillion scored two more in the top of the fifth to tie the game.

Lennox took off in the bottom of the fifth by scoring three runs to pull ahead by three. They kept their bats hot in the sixth as they scored three more.

Vermillion was unable to make a comeback in the seventh, losing 4-10.

Post 1 had two hits and three errors in their second game of the region tournament. Lennox had nine hits and two errors.

On offense, Jack Kratz recorded one RBI for Vermillion.

At the mound, Ward pitched the team-high 5.2 innings and had two strikeouts.

Post 1 went on to rematch Beresford in their third game at regions. Vermillion got behind early and could not fight back, losing 0-10.

Beresford was looking for revenge and started the game off hot.

The opponents scored four in the first inning, four in the second, and one run in both the third and fourth innings to take a quick 10-run lead.

Vermillion remained scoreless through the four innings. They held Beresford in the fifth but did not make a comeback in the bottom of the inning, losing 0-10.

Post 1 had two hits and four errors in their rematch against Beresford. The competition had 11 hits and no errors.

“Obviously, the tournament didn't end the way we wanted it to,” said coach Heisinger. “But I think it is a good thing for our guys to take that last game into the spring season next year.  With almost every kid coming back, hopefully, it will be a motivator.”

“After almost every game, we spent at least an hour together just hanging out, talking, and having a good time regardless of how the game turned out,” said G. Peterson. “That’s because we all just really enjoy each other’s presence, and that is why no other program in my book compares to ours.”

“This is something that I didn’t realize until after my last game, but Post 1 baseball is different from any other sport,” said Craig. “I know that everyone on Post 1 would go to battle for the guy sitting next to them in the dugout. It’s truly going to be irreplaceable.”

J. Peterson agrees that the team was close with one another this season.

“I would say the thing I enjoyed most about this season was how close we all were," said J. Peterson. "Every time we went onto the field, you knew everyone was going to fight for each other. I will miss being on the field with all of the guys. We all bonded really well.”