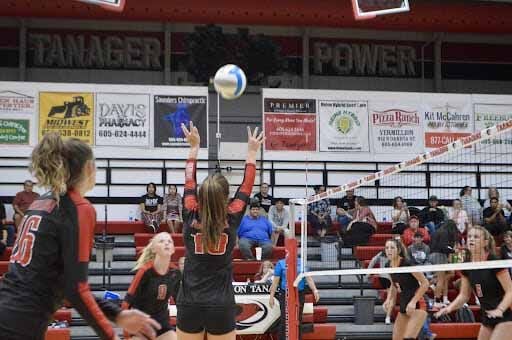 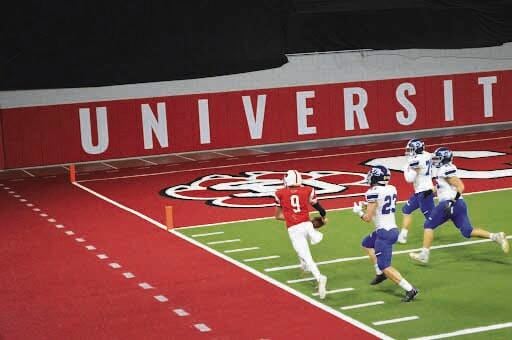 Senior Jack Kratz runs for the endzone during a Tanagers game in the DakotaDome this fall.

Senior Jack Kratz runs for the endzone during a Tanagers game in the DakotaDome this fall.

After the conclusion of the cross country season, sophomore Taeli Barta,sophomore was named to the Top 25 All State Cross Country Team.

After asking Taeli how she felt receiving this accomplishment, she said, “The season started off pretty slow but eventually I had some great races which I won including regions where I got my PR (personal record) and got me to state. Going into state I knew if I really pushed myself I could place pretty well. After the state race I was really surprised and excited to see I made All State.

“My team really pushed me to reach these goals that allowed me to run this well all season. And I was really honored to be running with all these girls and I’m excited to see how next season goes,” she said.

The Tanagers on the football field this year had an outstanding season pulling Vermillion out of a drought. Quarterback Jack Kratz said, “This season was a special one. We started this summer with having a new coaching staff. It was a change but I think we all adjusted well to that,” quarterback Jack Kratz said. “Coach O'Boyle expected a lot out of us every day and we responded well to that. We practiced hard every day knowing that games are won during practice.

“He motivated us every week to win and we believed that. We all had a lot of fun this year and are happy to start a tradition of winning in Vermilion,” he said.

“Our season started on June 1; the team worked hard in preparation for the season ahead. Our senior leaders bought into what the coaching staff said and the younger guys followed suit,” lineman Zach Brady said. “Coach O’Boyle demanded perfection every day and our team responded well. Our games weren’t won on Friday they were won on Monday through Thursday.

“During the week our practice squad would push the starters and give us the best look possible. Our hard work showed on Friday nights. Although it wasn’t always pretty, we did some things that Vermilion football hasn’t done in a while. We beat West Central for the first time in 21 years, we beat Dell Rapids for the first time in program history, and we hosted two playoff games.” Winning the first two games of the season on Aug. 27 and Sept. 3, the Tanagers knew they were in for a good season. Just as the season began, the boys finished their regular season with two wins, with a record of 6-3 ranked third in Class 11A qualifying for playoffs.

Vermillion headed into the postseason on Oct. 28 battling Tri-Valley at the DakotaDome. Previously this season, the Tanagers lost to the Mustangs, but fortunately, the Tanagers beat Tri-Valley to advance to the semi-finals. Facing Milbank on Nov. 5, sadly the boy’s football season came to an end.

“At the beginning of the season, the whole team was skeptical about what the new coach and season would bring, but over time we started to believe. Even after all the ass chewings and sprints, we bought into hard workouts,” linebacker Nick Sorenson said. “We pushed each other every day because we knew that games were won on Monday through Friday. We were happy to see our community's excitement in our team and I thank everyone who came out and supported us.”

The Tanagers lost 0-28 completing their season with a record of 7-4, one game short of the state championship.

Coach Zeller said, “Our season was truly defined by our team motto this year, G^3 - Grace, Grit & Gratitude. The group we had this year was a very thoughtful, kind group of young ladies. They got along well both on the floor and off of it as well.

“We were considerate of each other’s differences and we did the best we could to pull out each girl's strengths. The girls were given lots of opportunities to display grit. They worked hard and continued to grow as young adults and as volleyball players all year,” she said. “We took time every day to be thankful not only for each other but for the opportunity to practice and play a game we love.”

The girls officially started their season on Aug. 24 versus West Central. The Tanagers got their first win on Sept. 2 in South Sioux City, followed by two more wins on Bon Homme and Tri-Valley on the 7th and 9th of September. Eventually, on Oct. 26, the girls lost their last regular season game after a 5-set battle against Elk Point-Jefferson, ranked 8th in Region 4 Class A.

Captain Kara said, “Even though we didn’t have a winning season like everyone hoped we would, there is definitely tons of potential for the Vermillion volleyball team. I have never seen so much talent in one group of girls and I believe that they will do great things in the years to come.” The girls played their first postseason playoff game against the top seed, Dakota Valley, on November 2nd. Sadly, the girls lost and ended their season with a record of 7-18 ranked 41st in Class A.