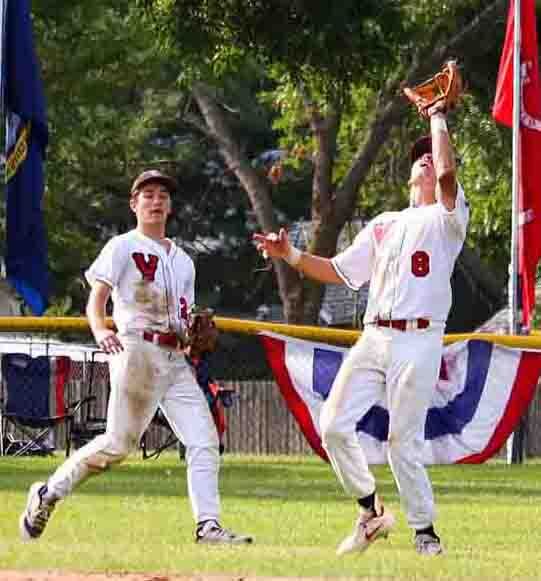 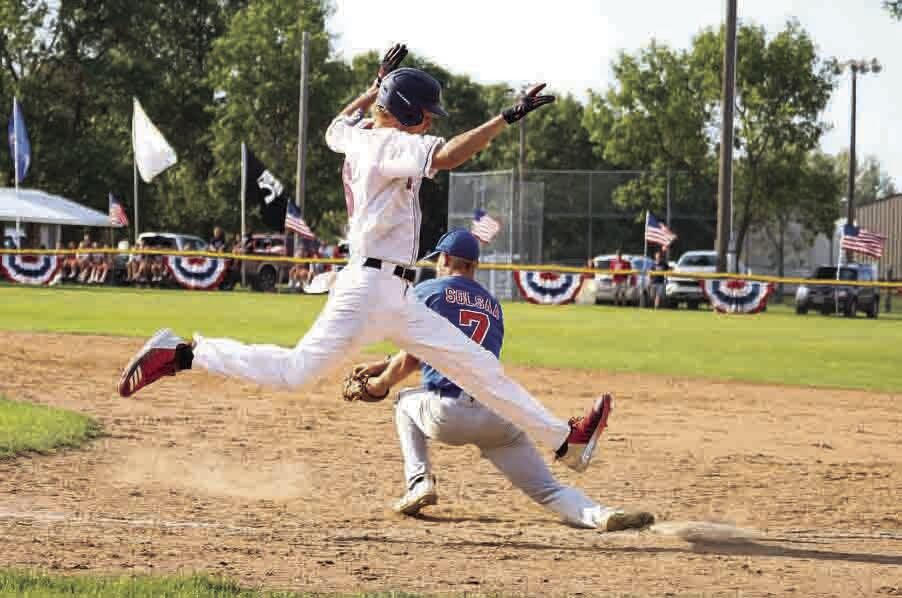 Jacob Chaussee races across first and is safe in the 2020 South Dakota VFW Class B State Championship against Dakota Valley. The opponents won 16-12 in Bryant this past Sunday.

Jacob Chaussee races across first and is safe in the 2020 South Dakota VFW Class B State Championship against Dakota Valley. The opponents won 16-12 in Bryant this past Sunday.

Vermillion Post 1 baseball competed in the 2020 South Dakota VFW Class B State Championship this past weekend in Bryant. Vermillion entered the tournament 24-4.

“I don’t know where to begin with these guys,” said Vermillion head coach Tom Heisinger. “I just love the way they compete, and they’re a team. They all work together, and they pick each other up.”

Post 1 first played Tea in the state tournament at noon after a rain delay. Vermillion won 7-4.

The competition began with a 2-run lead after the first inning. Post 1 tallied four in the second to pull ahead 4-2.

Tea tied the game at four in the top of the fourth, but Vermillion responded with three runs in the bottom of the inning.

The score remained 7-4 through the remainder of the game for Post 1 to advance to the state semifinal game.

Vermillion had four hits and two errors. Tea recorded nine hits and one error. On the mound, Jacob Chaussee threw the seven innings for Vermillion and tallied 20 first-pitch strikes.

Post 1 advanced to the semifinal Saturday afternoon against Castlewood/Clear Lake and captured the 6-2 win.

Vermillion began with the 2-0 lead after scoring one run in the first and another in the second.

Castlewood/Clear Lake followed with two of their own in the third inning to tie the game.

Post 1 took control of the remaining innings. Vermillion scored one in the fifth and three in the sixth to pull ahead 6-2 while holding Castlewood/Clear Lake from rallying.

The 6-2 final placed Post 1 in the championship. In the semifinal, Vermillion had 11 hits and no errors. Castlewood/Clear Lake tallied five hits and two errors.

At bat, Charlie Ward had the game-high two RBIs for Post 1. Gray Peterson, Drew Thelen, and Dylan Thelen each tallied two hits on the day.

From the mound, Peterson threw four innings and 14 first-pitch strikes. Drew Thelen pitched over two innings and had three strikeouts.

Vermillion’s Sam Ward took the mound to start the game. Post 1 captured three outs in the top of the first, leaving one on base.

Kobey June took the mound for Post 319. Vermillion scored two runs off two hits from Dylan Thelen and Chaussee for the 2-0 lead.

At the top of the second inning, Vermillion tagged an out at home to keep Dakota Valley from getting on the scoreboard.

With two outs, Dakota Valley’s Chayce Montagne recorded one RBI off a single. Paul Bruns was next at the plate with bases loaded and a full count, but Vermillion tallied the third out to leave three on.

Post 1 was ahead 2-1 entering the bottom of the second.

Vermillion’s C. Ward caught himself in a pickle heading for home after S. Ward was out at first. Dakota Valley catcher Sam Otten overthrew to third as C. Ward went home to increase Post 1’s lead 3-1.

At the top of the third, Dakota Valley scored after a sacrifice fly by June.

Vermillion remained ahead 3-2 entering the bottom of the third. Drew Thelen was the first at-bat and sent the ball over the fence for a solo home run.

Post 1 scored five runs on four hits to gain the largest lead of the night 8-2.

Keaton Hensley followed with a single RBI to bring it within five. With Vermillion’s Peterson on the mound, Otten hit a double to score two, narrowing Post 1’s 8-5 lead.

Dakota Valley kept their bats going as Hunter Beving and June each hit a double for one RBI. Post 319 had five runs on six hits to bring the game within one, 8-7 Vermillion.

Isaac Bruns took the mound for Dakota Valley in the bottom of the fourth inning, and the defense held Post 1 from adding to the board.

Vermillion also clamped down on defense as two hits left two on base but were scoreless in the bottom of the fifth. Post 1 kept the 8-7 lead going into the sixth inning.

The momentum started to swing as Vermillion loaded the bases in the bottom of the sixth with no outs.

Chaussee recorded a grand slam to regain the lead 12-10. Post 1 ended the sixth inning with four runs and two hits.

Jake Jensen and Willis Robertson threw for Vermillion in the final inning. Beving had a single RBI with the bases loaded and one out, putting Dakota Valley down one.

June followed with another single RBI to tie the game at 12. The bases remained loaded with one out.

I. Bruns hits a grand slam over right field, shifting the momentum as Post 319 took control 12-16 before Vermillion captured the third out.

Dakota Valley’s Jake Pruchniak took the mound to finish the game. Post 319 finished the job to win the state championship 12-16 with one left on for Vermillion.

“We played the game the right way, and I’m really proud of the run we went on,” said Post 1 coach Heisinger.

Post 1 tallied 11 hits and two errors in the championship. Dakota Valley had 19 hits and seven errors.

For Vermillion, Chaussee had four RBIs. S. Ward pitched the game-high 3.2 innings and had three strikeouts.

June and I. Bruns each had four RBIs for Post 319. Both also pitched three innings, and June recorded three strikeouts from the mound.

Vermillion finished 3-2 against Dakota Valley in matchups this season and finished with an overall 29-7 record. The team will lose two players after this season (Peterson, and S. Ward).

“Sam and Gray are a couple of guys that have really worked hard to develop their baseball skills,” said Post 1 coach Heisinger. “We are going to miss their leadership and so many things I can’t even begin to mention. Two great kids—I’m just proud I got to be around them for years.”

Both Peterson and S. Ward had a special relationship with the team.

“I’m most proud of the bond we were able to make with all our teammates,” said Peterson. “We had a lot of young guys playing. We came together as a team, played hard, and we didn’t give up.”

S. Ward also enjoyed being around the teammates.

“They are all great guys and great baseball players,” said S. Ward. “I loved every moment of playing with them. Through the wins and the losses, I had a great time.”

Their favorite memory of all their years with Post 1 baseball was Chaussee’s grand slam in the 2020 championship.

“We were down and giving up a lot of runs,” said S. Ward. “Chaussee, who has been struggling before this, comes out and absolutely rips one. We were all so happy and jumping around. I wish we could’ve pulled it off, but I don’t think I’m ever going to forget that moment. That was absolutely incredible.”

Peterson added, “The excitement in our dugout was as if all 13 of us hit that home run.”