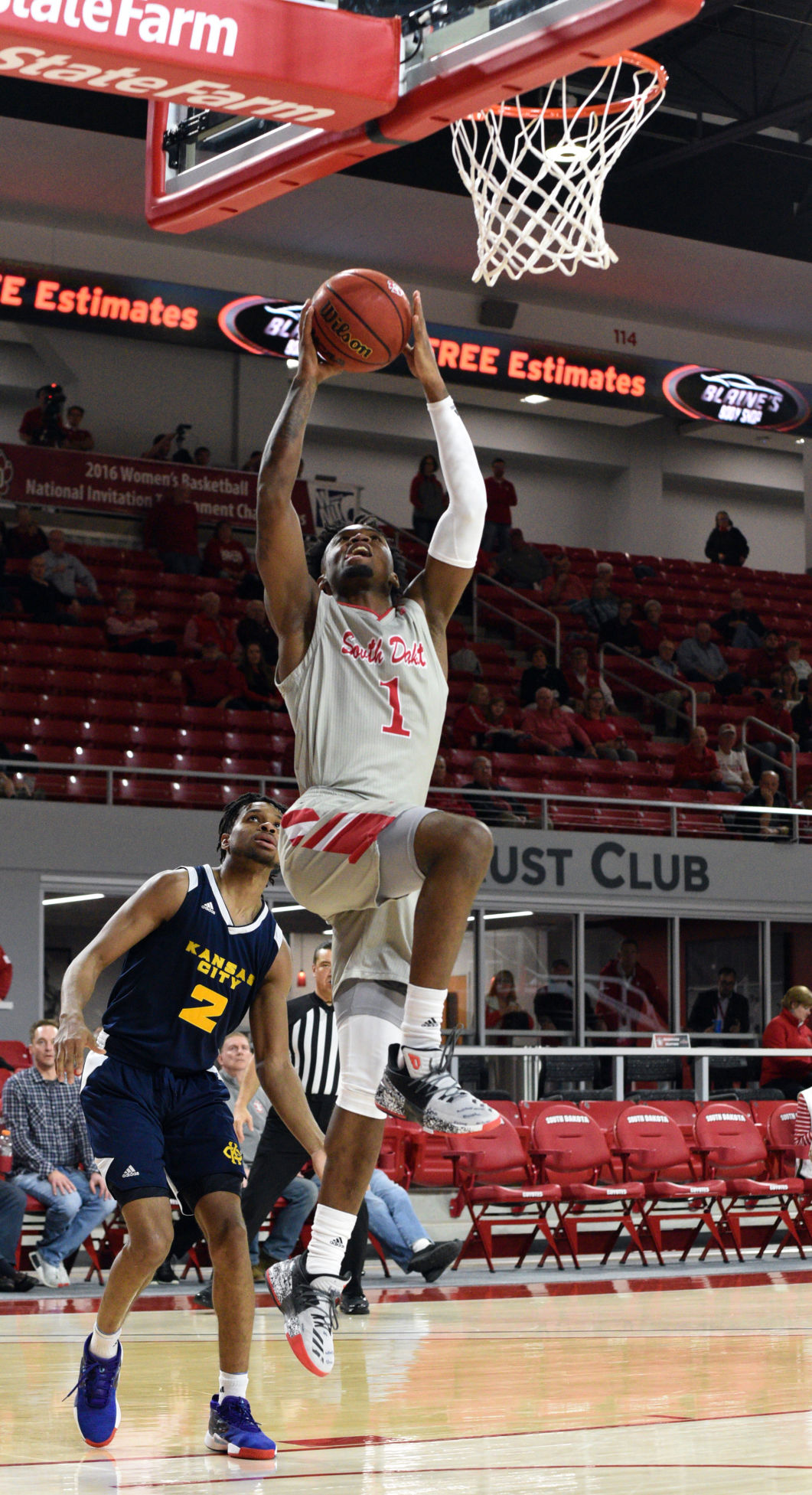 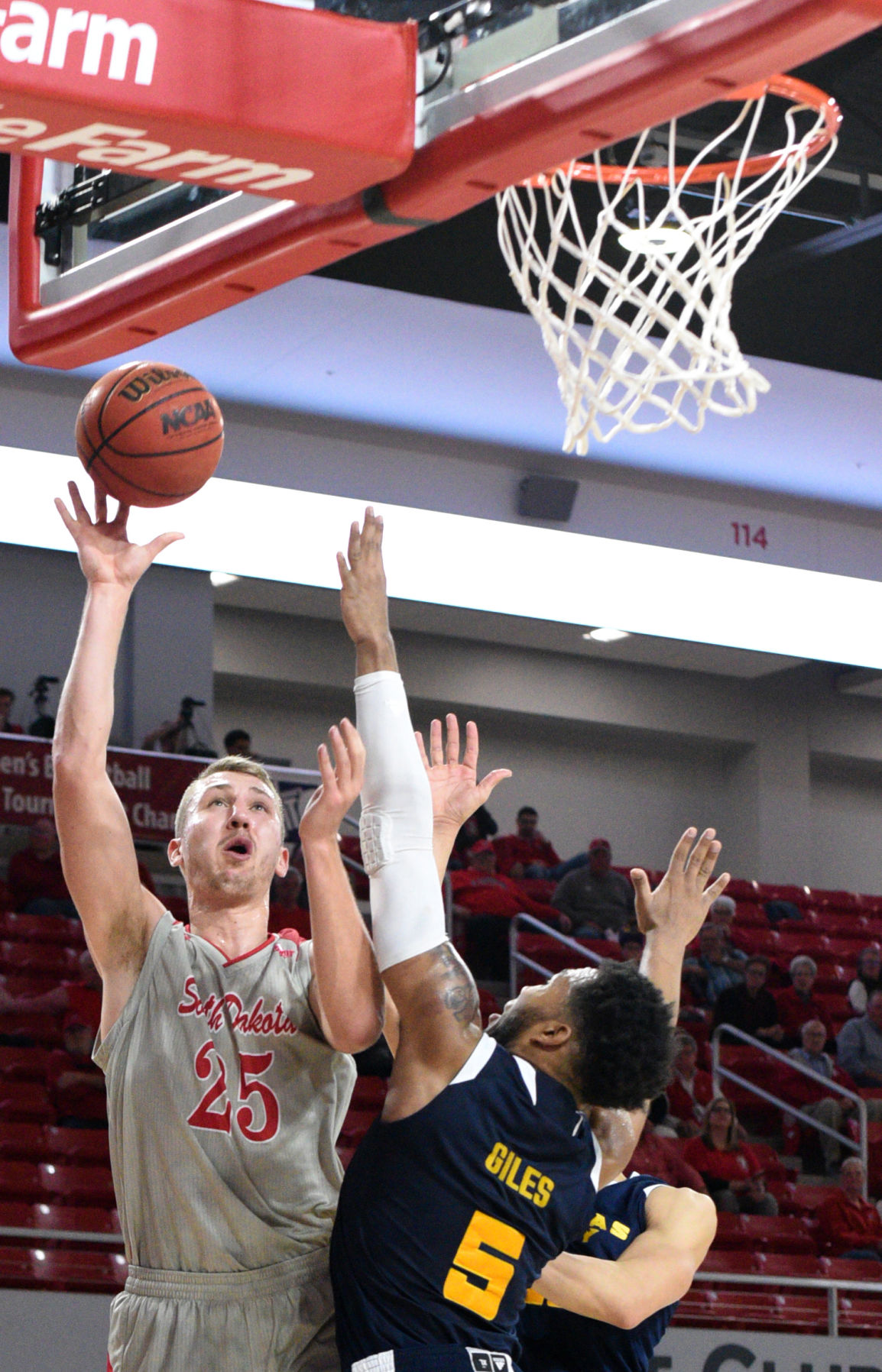 South Dakota's Tyler Hagedorn shoots over a pair of Kansas City defenders during their men's basketball game on Sunday at the Sanford Coyote Sports Center.

South Dakota's Tyler Peterson goes in for a layup against the defense of Kansas City's Marvin Nesbitt, Jr., during their men's basketball game on Sunday at the Sanford Coyote Sports Center.

South Dakota's Tyler Hagedorn shoots over a pair of Kansas City defenders during their men's basketball game on Sunday at the Sanford Coyote Sports Center.

South Dakota's Tyler Peterson goes in for a layup against the defense of Kansas City's Marvin Nesbitt, Jr., during their men's basketball game on Sunday at the Sanford Coyote Sports Center.

VERMILLION — The box score will show that Kansas City defeated South Dakota 78-75 and a further look will show Jahshire Hardnett made a three-pointer with two seconds left, but there’s more to it.

The reality, though, goes far beyond that shot, the Coyotes will tell you.

As both head coach Todd Lee and senior Tyler Hagedorn said after Sunday afternoon’s men’s basketball game at the Sanford Coyote Sports Center, however, the game was won long before that final shot.

Kansas City — which will rejoin the Summit League next year — started the second half on an 11-0 run, led by as many as 18 points and shot 63 percent for the game.

“They showed up tonight and we didn’t.”

That’s becoming a problem for the Coyotes (9-5), according to Lee.

Those concerns have been discussed many times — through conversations and through film sessions — but they still remain, Lee added.

“We’ve got a lot of soul searching to do with the group we have right now, and we’ve got to get better,” he said.

Despite those struggles, the Coyotes still very nearly sent the game to overtime after a furious comeback.

A driving layup with six seconds left by USD junior Ty Chisom tied the game at 75-75, but the ‘Roos pushed the ball up-court and Hardnett sank a three-pointer with two seconds remaining.

Had the game gone into overtime, USD might very well have come out on top, but there just wasn’t enough time for the Coyotes.

“We either win or we run out of time,” said senior Cody Kelley, who scored 15 points.

“We look at it optimistically. We ran out of time tonight.”

What specifically has been the root of the problem with USD — which had lost by 19 points to Northern Colorado two days earlier?

“It’s a lack of effort by veterans,” Lee said.

The game is not always going to be played the way one would want it to be played, but guys still need to step up, the coach added.

“I told the guys in there, ‘This is your team. You guys are seniors, this is it,’” Lee said. “’If you’re not going to compete or do what you’re supposed to do, it’s going to be a disappointing year.’”

Outside of Hagedorn and Kelley, the Coyotes got 11 points from senior Tyler Peterson and eight points off the bench from Chisom.

Junior Stanley Umude, however, as limited to four points on 2-of-9 shooting.

Asked how the Coyotes can turn things around heading into the Summit League season, Kelley said one game doesn’t necessarily mean everything needs fixing.

“There’s nothing you turn around,” he said. “This is our season.

“We dropped a game, boo hoo. That’s what I think.”

The Coyotes, he added later,

“We have a second half to the season. We’re ready for conference play,” Kelley said.

“We’ve got five seniors who are hungry to play. This is our year. We’re not going to waste it.”