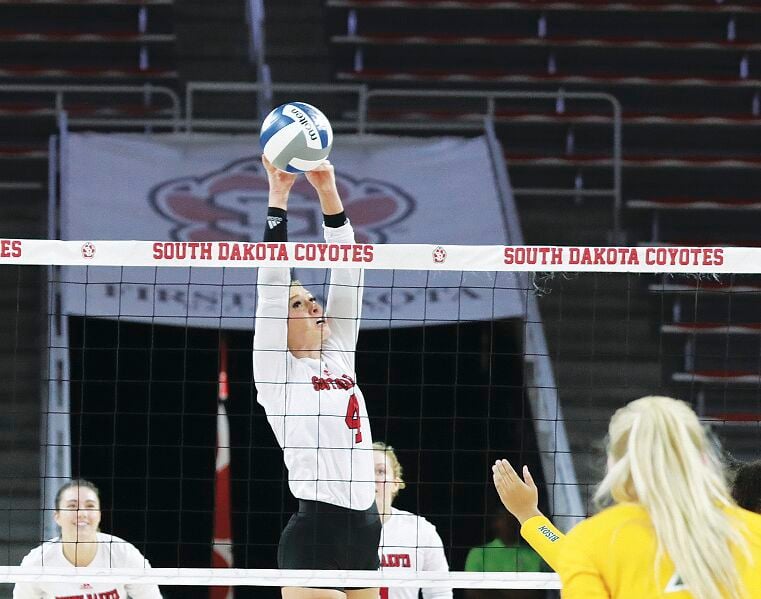 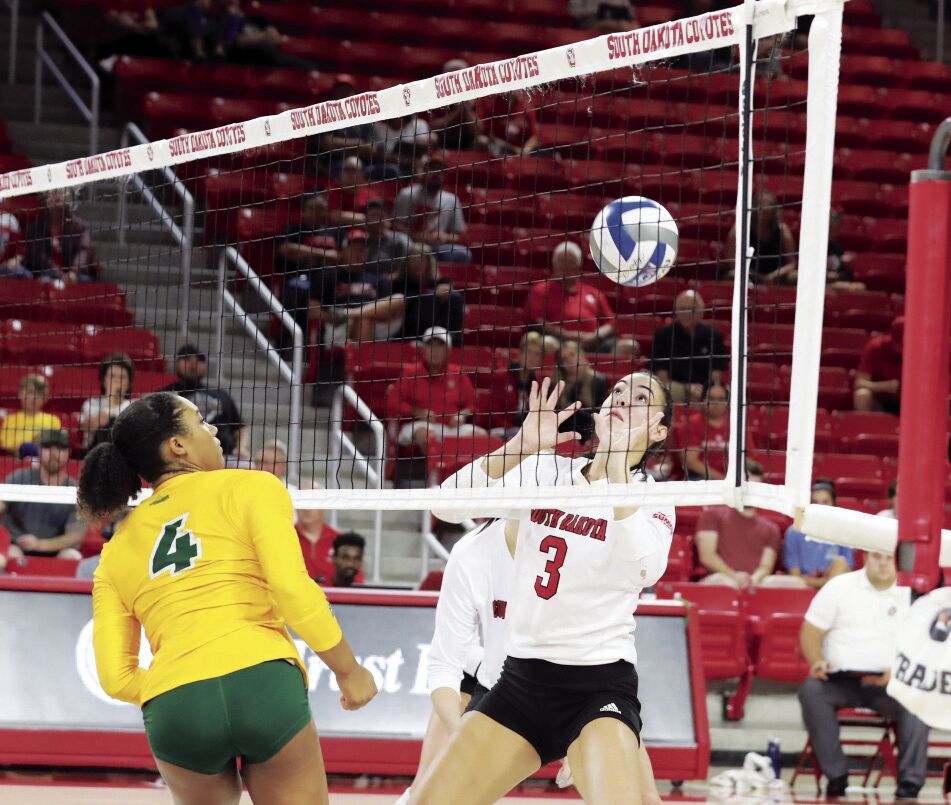 South Dakota's Sami Slaughter (3) tries to keep the ball under control while the Bison's MIchelle Glover watches during the Coyotes' volleyball match against North Dakota State Tuesday night in the Sanford Coyotes Sports Complex in Vermillion.

South Dakota's Sami Slaughter (3) tries to keep the ball under control while the Bison's MIchelle Glover watches during the Coyotes' volleyball match against North Dakota State Tuesday night in the Sanford Coyotes Sports Complex in Vermillion.

VERMILLION — South Dakota moved to 2-0 in Summit League play by hitting a season-high .427 and making quick work of North Dakota State in front of nearly 1,000 fans Tuesday inside the Sanford Coyote Sports Center. Scores went 25-20, 25-14 and 25-18.

The Coyotes moved to 5-6 overall while sending the Bison (6-9, 0-3 Summit) to their sixth straight defeat. Both teams began a stretch of three matches in five days. South Dakota travels to Oral Roberts Thursday and Kansas City Saturday.

“This was another full team win,” said South Dakota head coach Leanne Williamson. “North Dakota State is a team that yearly gives us some struggles, so for us to come out and create some leads and win a little more decisively I think says a lot about the work this team has put in.”

Elizabeth Juhnke led South Dakota with 13 kills and has reached double digits in all 11 matches this season. She surpassed 1,000 career kills during the match, becoming the ninth Coyote since 1986 to reach that milestone.

“It’s a great feat and something I know she’s proud of and something we’re proud of her for accomplishing as well,” said Williamson. “Just really looking forward to getting on the road now and getting out in three is a huge thing for us tonight.”

Madison Harms had 10 kills with no errors on 15 swings and Aimee Adams added nine kills with one error on 17 attempts. Maddie Wiedenfeld had six kills on 12 attacks without an error.

Defensively, Lolo Weideman was brilliant to the tune of 16 digs, which was the match high. Juhnke and Jadyn Jondle added seven digs apiece. Madison Jurgens had 33 assists. Brooklyn Bollweg had four aces.

“One of our big focuses this week was blocking and really focusing on everyone doing their job on the court,” said Weideman. “I think we did a good job of that tonight. Our hitting percentage was great and they only hit .134 so I think that was really good for us.”

Ali Hinze led North Dakota State with 10 kills, but had seven errors and hit .081. Another Bison outside hitter, Syra Tanchin, put down six balls with two errors and hit .174.

“We definitely focused on slowing down their outsides a little bit more this week – that was a focus of ours – and to see one of their outsides hit under .100 and the other .174, I feel like those are much better percentages from what we’ve seen with some of the other outsides that we’ve played,” said Williamson.